The awards calendar keeps adjusting, not only to the new Oscar date of April 25, 2021 but to ever-shifting theater openings. The slimmer fall festivals can’t serve as the usual launchpads, but they will perform a valuable function for smaller titles that need the branding. Last year, Bong Joon Ho’s “Parasite” rode the Cannes Palme d’Or all the way to a Best Picture win.

Emerging directors will have a tougher time making an impact. What kind of attention can movies raise from virtual festival screenings or online release? Many will push back to post-Oscar 2021. Clearly, established directors of well-budgeted and marketed movies have the advantage.

In the weird year that is 2020, we only got to see one traditional awards outpost with January’s Sundance Film Festival, which yielded slim Oscar pickings, from the Olivia Colman-Anthony Hopkins two-hander “The Father” to a bunch of strong documentaries. This year, Academy rules are flexible: If a theatrical release was planned, movies that premiere online or at an online film festival are Oscar eligible.

After Lee made a triumphant 2018 return to Cannes with “BlacKkKlansman,” which later won the Best Adapted Screenplay Oscar, he intended to debut Vietnam drama “Da 5 Bloods” (June 12, Netflix) at Cannes 2020: It would have played out of competition as he headed the Competition jury. Instead, the rip-roaring fable went straight to Netflix. The action-packed drama about four Big Red One infantrymen (led by Lee alumnae Delroy Lindo and Clarke Peters) who return to Saigon to search for buried treasure scored rave reviews (82 Metascore).

Also set for Cannes was Wes Anderson’s “The French Dispatch,” which Searchlight moved from a Riviera debut in May (it’s in the official selection) and July opening, to prime Oscar season in October, to 2021. Anderson shot the film in Angoulême and it features a mighty ensemble in three storylines about the French outpost of a Kansas newspaper, including regulars Bill Murray (as the paper’s editor), Frances McDormand, Tilda Swinton, and Adrien Brody, plus Anderson newcomers Benicio del Toro, Jeffrey Wright, Elisabeth Moss, Léa Seydoux, and Timothée Chalamet. In 2015, Anderson’s “The Grand Budapest Hotel” scored nine Oscar nominations (including Anderson’s only directing nod), and won four tech Oscars after playing Berlin, a likely February launch pad for this movie with global appeal.

For his screen update of the 1957 musical “West Side Story” (December 18, Fox/Disney), Spielberg reunites with screenwriter Tony Kushner (“Munich,” “Lincoln”). Unlike Robert Wise and Jerome Robbins’ Oscar-winning 1961 movie adaptation, which cast a number of white actors to play Puerto Rican characters, Spielberg cast some 20 Hispanic performers in those roles, and brought back Oscar-winner Rita Moreno as executive producer, who plays a new character, to help him remain authentic to the Puerto Rican experience. Tony-nominee Ariana DeBose (“Summer: The Donna Summer Musical”) took on Moreno’s role of Anita, while Tony and Maria are played by scandal-tainted Ansel Elgort (“Baby Driver”) and newcomer Rachel Zegler, respectively.

With his much-delayed “Tenet” (September 3, Warner Bros.), Nolan follows up his Oscar-nominated “Dunkirk” with a time-twisting thriller that took a year to write. Filmed on location (in 70mm and IMAX) with cinematographer Hoyte van Hoytema in Denmark, Estonia, India, Italy, Norway, the United Kingdom, and the United States, the $225-million epic stars John David Washington as an operative of the organization Tenet who tries to prevent World War III, along with Robert Pattinson, Michael Caine, and Kenneth Branagh as a Russian oligarch; his ex-wife is Elizabeth Debicki.

Early buzz is strong on period drama “News of the World” (December 25, Universal) written by directing nominee Greengrass (“United 93”) and writing nominee Luke Davies (“Lion”). Set after the Civil War, Tom Hanks (who teamed with Greengrass on ”Captain Phillips”) stars as a traveling newsreader who accompanies an orphan girl (German actress Helena Zengel) back to her surviving family. In 2020, Hanks not only nabbed his first Oscar nomination since “Cast Away” for playing Fred Rogers in “A Beautiful Day in the Neighborhood,” but also survived COVID-19.

While David Lynch and Alejandro Jodorowsky may have been defeated by big-screen adaptations of Frank Herbert’s 1965 science-fiction novel “Dune” (December 18, Warner Bros.), Oscar-nominated Canadian auteur Villeneuve (“Arrival”) embraced the chance to bring his trademark visual panache to the sci-fi epic, which will come in two parts, written by the director and Eric Roth. Oscar Isaac plays Duke Leto Atreides and Chalamet is his son Paul, who travel to planet Arrakis, which supplies the universe with the spice melange. Zendaya also stars with Josh Brolin, Javier Bardem, Rebecca Ferguson, Jason Momoa, Dave Bautista and Stellan Skarsgard. Filmed on location in Budapest and Jordan,”Dune” wrapped way back in July 2019 with elaborate post-production to follow.

Oscar-winner Ron Howard (“A Beautiful Mind”) could be back in the Oscar hunt with “Hillbilly Elegy” (fall, Netflix), which Vanessa Taylor (“The Favourite”) adapted from J.D. Vance’s 2016 bestseller “Hillbilly Elegy: A Memoir of a Family and Culture in Crisis.” Howard cast Gabriel Basso as Vance, who grows up with an Appalachian family in Ohio, as well as two acting powerhouses long overdue for an Oscar win, Amy Adams and Glenn Close, who between them boast 13 total nominations.

Oscar-winner Coppola (Original Screenplay, “Lost in Translation”) is a potential contender for “On The Rocks,” a drama about a young mother (Rashida Jones) who rejoins her big-personality father (Bill Murray) in New York City. A24 plans to release in theaters, but it could wind up on Apple TV+. The movie also stars Marlon Wayans, Jessica Henwick, and Jenny Slate.

Established as a filmmaker to watch with the Oscar-winning “Spotlight,” McCarthy directs drama “Stillwater” (November 6, Focus), written by Thomas Bidegain and Noé Debré, starring Matt Damon as a father who flies from Oklahoma to France to help his daughter (Abigail Breslin) after she is charged with murder.

New prospects include Oscar-winning screenwriter Aaron Sorkin (“The Social Network”), who is back in the director’s chair with “The Trial of the Chicago 7” (once Paramount, now Netflix). The timely history lesson tracks how a peaceful protest outside the 1968 Democratic National Convention morphed into a deadly clash with police and National Guard forces as a horrified nation watched events unfold on television. The film also follows the ongoing conspiracy trial, dominated by bigger-than-life protest leaders Abbie Hoffman (Sacha Baron Cohen), Jerry Rubin (Jeremy Strong), Tom Hayden (Eddie Redmayne), and Bobby Seale (Yahya Abdul-Mateen II) along with their star lawyer, William Kunstler (Mark Rylance). Sorkin reportedly wanted to get the movie out before the election.

After Chinese multi-hyphenate Chloé Zhao broke out in 2017 with low-budget docudrama “The Rider,” she landed a Marvel tentpole (“The Eternals,” 2021) and then returned to America’s wide-open spaces with “Nomadland” (fall, Fox Searchlight), based on Jessica Bruder’s nonfiction book “Nomadland: Surviving America in the Twenty-First Century” and starring two-time Oscar-winner Frances McDormand (“Fargo,” “Three Billboards Outside Ebbing, Missouri”) as a woman who hits the road in a van after the 2008 recession. David Strathairn costars.

Brooklyn indie Eliza Hittman describes her third movie, Sundance and Berlin prize-winner “Never Rarely Sometimes Always” (April 3, Focus Features), as “a poetic odyssey about a girl in rural Pennsylvania who travels to New York and spends 48 hours navigating a personal crisis in a city she’s never been to.” Inspired by a newspaper article about the death of an Indian woman who died in Ireland of blood poisoning after being refused a life-saving abortion, the movie stars musician Sidney Flanigan opposite another film newcomer, theater veteran Talia Ryder.

Assuming the films make it into release in time, here are the likely prospects for Best Director, listed in alphabetical order. I won’t deem a movie a frontrunner until I have seen it.

Fri Jul 31 , 2020
Around 40 individuals living near the USC campus on fraternity-filled 28th Street have tested positive for COVID-19. Nearly 150 student and faculty have contracted the virus. (Brian van der Brug / Los Angeles Times) USC is dealing with an outbreak of the coronavirus spread across the university’s Greek row. The […] 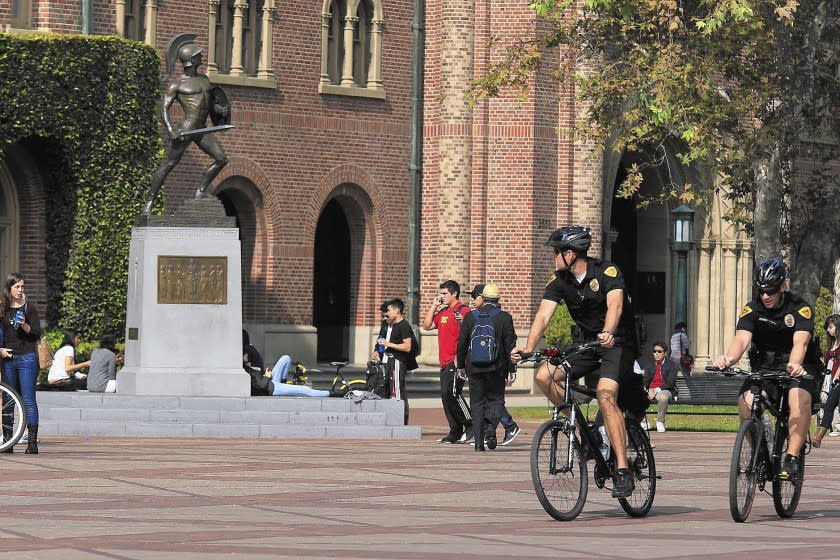