WASHINGTON — In the summer of 2017, Lenka Perron was spending hours every day after work online, poring over fevered theories about shadowy people in power. She had mostly stopped cooking and no longer took her daily walk. She was less attentive to her children, 11, 15 and 19, who were seeing a lot of the side of her face, staring down into her phone. It would all be worth it, she told herself. She was saving the country and they would benefit.

But one day while she was scrolling, something caught her eye. People claiming to be sources inside the government had posted on Facebook that John Podesta, a former White House chief of staff, was about to be indicted. And yet on her phone she was watching a video that showed him chatting casually in front of an audience. Around the same time she saw Hillary Clinton, another supposed target for an indictment, walking in Hawaii, looking relaxed and holding a coffee cup.

“She just wasn’t behaving like someone who was about to get arrested,” she said.

Sign up for The Morning newsletter from the New York Times

It was the first nagging feeling that something did not add up. Five months and many more inconsistencies later, Perron, a consultant in the insurance industry in suburban Detroit, finally called it quits.

“At some point I realized, ‘Oh, there’s a reason this doesn’t fit,’” she said. “We are being manipulated. Someone is having fun at our expense.”

Her journey out of that world could be instructive: As the country begins to sort through the political fallout from four years of Donald Trump, one looming question is what will happen with the followers of QAnon and other anti-establishment conspiracy theories that have been bending Americans’ perceptions of reality.

There are signs that some have lost faith: Trump left Washington last week, blowing a hole through a key QAnon belief — that Trump, not President Joe Biden, was the one who would be inaugurated on Jan. 20. But others are doubling down, and experts believe that some form of the QAnon conspiracy theory will remain deeply embedded in the nation’s culture by simply morphing to incorporate the new developments, as it has before.

QAnon believers are part of a broader swath of Americans who are immersed in conspiracy theories. Once on the far-right fringes, these theories now hold people from across the political spectrum in their thrall, from anti-lockdown libertarians to left-wing wellness types and “Stop the Steal” Trumpists.

The theories can be malevolent, causing real-life damage to people who end up in their crosshairs: the parents of children killed in the Sandy Hook mass shooting who have been harassed by conspiracists, or a Washington pizza restaurant shot up by a man who had come to take down a child trafficking ring he believed was housed inside. Q sweatshirts dotted the crowd that stormed the Capitol on Jan. 6.

But while much has been said about how people descend into this world, little is known about how they get out. Those who do leave are often filled with shame. Sometimes their addiction was so severe that they have become estranged from family and friends.

The theories seem crazy to Perron now, but looking back, she understands how they drew her in. They were comforting, a way to get her bearings in a chaotic world that felt increasingly unequal and rigged against middle-class people like her. These stories offered agency: Evil cabals could be defeated. A diffuse sense that things were out of her control could not.

The theories were fiction, but they hooked into an emotional vulnerability that sprang from something real. For Perron, it was a feeling that the Democratic Party had betrayed her after a lifetime of trusting it deeply.

Her immigrant family, from the former Yugoslavia, were union Democrats in working-class Detroit who had seen their middle-class lifestyle decline after the passage of the North American Free Trade Agreement. As an inspector for the insurance industry, she spent decades in factories seeing union jobs wither. Still, she stayed with the party because she believed it was fighting for her. When Sen. Bernie Sanders became a presidential candidate she found him electrifying.

“He put into words what I couldn’t figure out but I was seeing around me,” said Perron, who is now 55. “The middle class was shrinking. The 1% and corporations having more control and taking more of the money.”

She felt sure the Democratic establishment would back him, and she began volunteering for his campaign, meeting many new friends in the movement. But she felt that the news media was barely covering him. Then he lost the 2016 primary. When she began reading through leaked emails that fall, it looked to her like the party establishment had conspired to block him.

She spent weeks combing through the emails, hacked from Podesta, the Democratic National Committee and Clinton. Her stunned discovery enraged her and put her on the path to conspiracy theories and, eventually, QAnon.

“There was no hint of conversation about the working class,” she said about the emails. Instead, she said, it was “expensive dinner parties, exclusive get-togethers.”

The emails were Perron’s doorway to the conspiracy world, and she found others there too. She was no longer a lonely victim of a force she did not understand, but part of a bigger community of people seeking the truth. She loved the feeling of common purpose. They were learning together how to research, looking up important people in the emails and figuring out how to trace them back to big donors.

“There was this excitement,” Perron said. “We were joining forces to finally clean house. To finally find something to explain why we were suffering.”

The community was growing, and also going to darker places. Perron remembers watching and sharing videos appearing to link a Washington pizza parlor to Podesta, Clinton and a child sex trafficking ring. The dots were hazy, but she and her newfound friends on Facebook and Reddit drew bright lines connecting them. It sounds crazy now, she said, but at the time it felt so real and disturbing that sometimes she felt physically ill.

“It was all of us,” she said of the early months of her immersion. “It was these puzzle pieces that we all got to play around with. We were all sort of authoring this.”

If the early months were a build-your-own-adventure designed by different groups, all the theories were snapped together into one giant “deep state” explanation after Q, the anonymous person or people at the center of QAnon, first posted in late 2017, she said. Q’s information drops had an addictive effect, drawing her in again after she had started to have doubts.

“Q managed to make us feel special, that we were being given very critical information that basically was going to save all that is good in the world and the United States,” she said. “We felt we were coming from a place of moral superiority. We were part of a special club.”

Meanwhile, her family was eating takeout all the time since she had stopped cooking and her stress levels had shot up, causing her blood pressure medication to stop working. Her doctor, worried, doubled her dose.

People who tried to talk her out of the conspiracy theories by sending her factual information only made it worse.

“Facts are not facts anymore,” Perron said. “They are highly powerful, nefarious people putting out messaging to keep us as docile as sheep.”

As the months went on, the claims she was seeing grew more outlandish. There were slickly produced videos of cannibalism and Satanism within the Democratic Party.

“The people I got to know on social media, they started to look stranger and act stranger and I didn’t want to be like that,” she said.

Trump himself was a source of doubt. Q presented him as a brilliant mastermind, and for a while she accepted that. But it became harder to reconcile that persona with what she observed in real life.

Another twinge of self-consciousness came during a phone conversation with a childhood friend. “I remember calling my best friend and getting all into the number of pedophiles in government and that they’ve taken over the whole government system,” she said. “I felt a part of her saying, ‘This is not the friend I recognize.’ It never came out in words, it was just a sense that I had.”

When she first left QAnon, she felt a lot of shame and guilt. It was also humbling: Perron, who has a master’s degree, had looked down on Scientologists as people who believed crazy things. But there she was.

But she has come to appreciate the experience. She has talked to her children about what she went through, and has learned to identify conspiracy dependence in others. She agreed to speak for this article to help others who are still in the throes of QAnon.

There are many. Perron volunteers as a life coach, and recently was working with a 40-year-old man who had lost his marriage and was falling asleep at work. At some point, he began texting her Q links. She realized he was staying up all night consuming conspiracy theories.

“I was watching his life fall apart,” she said. “I had no way to penetrate it. I could not even make a dent.”

She said she was no longer working with him.

Trump may be gone from government, but Perron believes that the ground is still fertile for conspiracy theories because many of the underlying conditions are the same: widespread distrust of authority, anger at powerful figures in politics and in the news media, and growing income inequality.

Unless there are major changes, Perron said, the craving will continue.

Sun Jan 31 , 2021
From strategy to RPG and first-person shooters, there’s something for everyone in our selection (iStock/The Independent) While console gaming remains ever popular, more than a billion folks enjoy PC gaming because it provides more processing power and a richer variety of games. Mammoth titles such as Fortnite and PlayerUnknown’s Battlegrounds […] 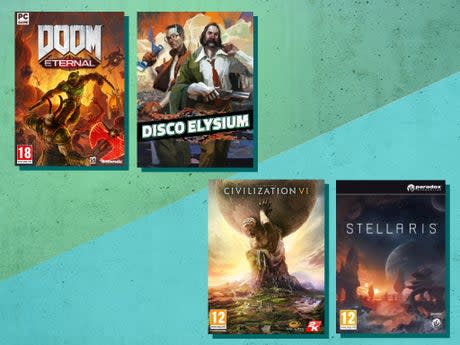