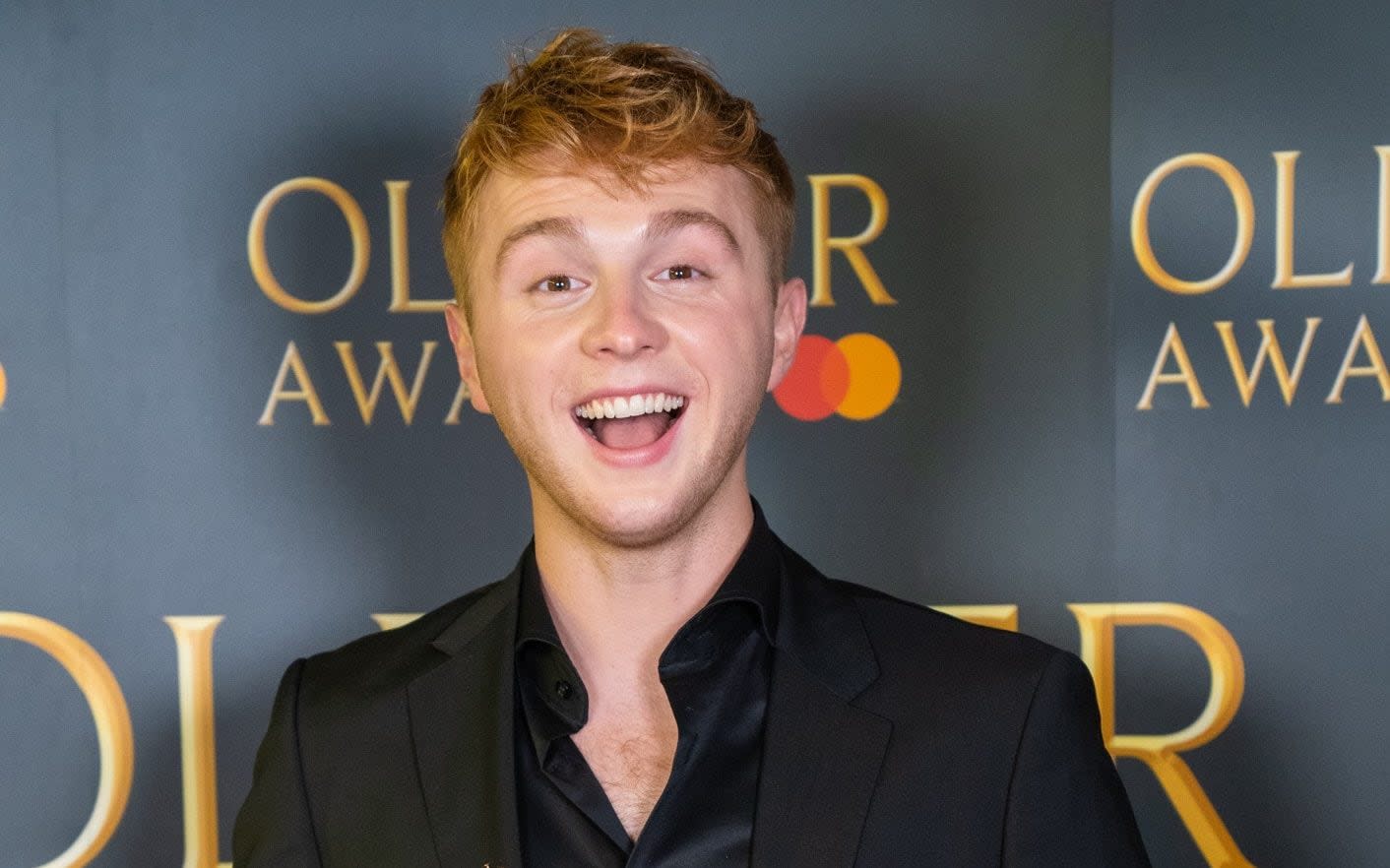 Winning your first Olivier Award at 22 years old should have meant a joyful night of champagne, celebration and singing on stage at the Royal Albert Hall.

But, instead of walking the red carpet, Sam Tutty is back in his childhood bedroom, having just watched the pre-recorded ceremony with his mother and younger brother, eating nibbles on the sofa in their West Sussex home.

The actor has moved out of his North London flat, is relying on his savings, and does not know when he will be back on stage due to the coronavirus shutdown.

But he’s still grinning from ear to ear, and says he feels “very blessed, very lucky.”

On Sunday night, Tutty won the Laurence Olivier Award for best actor in a musical for his performance in the title role of Dear Evan Hansen, which also scooped Best New Musical and Best Original Score awards.

But the year has been marked by uncertainty and financial difficulty for actors and theatres across the nation. Tutty well remembers the atmosphere at the Noel Coward Theatre on March 16, when they were told to close.

“There was a sense of gloom, but we got ready as usual. Then there was a call for everyone to come to the stage. That was it. We said our goodbyes. My last words were ‘See you in two weeks!’”

His Olivier nomination two weeks earlier had kept him in good cheer, but the realisation that the postponed awards night would be no grand affair hit hard.

“I was very upset we couldn’t have that ceremony. I hadn’t been to the Royal Albert Hall and was looking forward to going and singing “You’ll Be Found”. When the day [April 5th] came I was really miserable, but as the months went by I got over it.”

He has had other challenges to put it in perspective.

“I’m one of the ‘excluded’,” he explains – one of the millions left without targeted support. “They said, ‘We will help self-employed people’ but I fell through even the smaller cracks the Government thought they had sealed up.

“It was my first year in the industry so I didn’t have the tax [returns]. I have had to use my savings to get by. It has been very tough. My friend Lucy [Anderson], who plays Zoe [Evan’s love-interest], is in the same position. And it has been much the same with everyone. I haven’t met another actor who said ‘I’m fine’.

“I think we’re all dealing with it in similar ways and have ups and downs. In a week’s time I might be low.”

It doesn’t help to get irate “at the injustice”, he maintains, although he’s less than sanguine about the recently re-aired (and instantly misfiring) online government campaign to encourage retraining – which attracted opprobrium for its use of a ballerina (“Fatima”) as a poster-girl.

“The last thing we needed was being told us to retrain and go into cyber. You don’t want to see that when you’re waking up in a pandemic. It was a bad move to say the least. I would like to see how people would fare living in a world without entertainment.”

But some actors have had to get other jobs. Anna-Jane Casey has been a West End leading lady for three decades. Since June, Casey has been working for a courier company earning £1 per parcel with her husband and fellow actor, Graham MacDuff.

With a mortgage and two children, Casey 48, initially found a temporary job in a Morrison’s warehouse, but as it became clear the shutdown would last months, she needed something more permanent.

Equity, the actors’ union, said 40 per cent of its 48,000 members are excluded from the Self-Employed Income Support Scheme, 19,000 people. A number have reported having to use food banks because competition for even minimum wage work is so tough.

Mr Tutty still keeps his character in mind. He does vocal exercises, runs through lines and even dreams he’s back at the Noel Coward. No one knows when Dear Evan Hansen will be back but he can take comfort from knowing he will be wanted when it is.

“I love this show so much it would be reckless to throw it all away. I’d never forgive myself if I said ‘I’m bored of waiting’. I’m sticking with it, until they throw me out!”

He laughs, then turns serious and urges all young actors of his generation to hang on in there, too: “Hold on. Theatre is going to come back and it’s going to be an absolute storm.”

Tutty was brought up between Crawley in West Sussex and Hull. There are striking parallels between his background and that of his character.

Both were brought up by single mothers. Tutty’s mother is a primary school teacher, and his father left when he was 10 (and hasn’t, Tutty notes in passing, seen the show).

The stirring scenes between mother and son are close to home: “I compare those exchanges to the tough conversations I had with my mum. In rehearsals I had to be careful. I had to learn to control my emotion. I can certainly identify with Evan Hansen, but I’ve never struggled to make friends as he does,” he said.