(Bloomberg) — For Megan Martin, the tipping point came when she passed several men slumped over the steps of a Broadway church in the middle of the day.

“They weren’t sleeping, they were in the throes of addiction,” said Martin, who offers her assessment as an anesthesiologist with a master’s in public health. Within days, she helped found the West Side Community Organization, which seeks, its website says, “to advance a restored quality of life for residents, visitors, and the small business community in our neighborhood.”

It’s not just any neighborhood but Manhattan’s Upper West Side, home to Lincoln Center, “Seinfeld,” the dinosaurs of the Museum of Natural History and enough liberal-minded thinkers to staff a slew of universities. Abstruse disputation is hardly unknown but argument has reached a new level with threats of lawsuits and charges of snobbish bigotry and snowflake naïveté.

How it’s resolved will offer a dress rehearsal for the post-virus future as New York City seeks, amid overlapping crises of illness, joblessness, lifestyle shifts and racial tension, to hold onto its residents and businesses — and attract new ones. If the well-off, left-leaning Upper West Side can’t find a way to accommodate fellow New Yorkers in deep need right now, many are wondering, what does that say about the kind of city its residents really want?

The fight is over the treatment of some 600 homeless people placed in the area. City Hall removed them from group shelters to reduce the spread of Covid-19 and is paying to lodge them in boutique hotels hungry for business in the tourist-challenged year of 2020.

Summer has turned to fall and the city’s viral infection rate has plummeted. Museums are opening, indoor dining is starting. Some semblance of normalcy is returning. Yet the homeless people are still there. And while the city just announced plans to move 200 of the men downtown, the others are staying and more are expected. Many neighbors just want them all to go away.

“For the people of the Upper West Side, the situation remains one of trauma and concern,” asserted Randy Mastro, a lawyer and former deputy mayor under Rudy Giuliani hired by Martin’s well-funded community organization, in an interview. He wasn’t referring to the loss of 24,000 New Yorkers to the virus, but to the ongoing presence of homeless people in their midst.

After Mastro threatened legal action, Mayor Bill de Blasio said he’d send them to another shelter. But he put that on hold when it was learned they would displace others, including a number with disabilities. The city now says a third shelter near Wall Street has been found for some of them. But other moves are still being planned and debated.

For the homeless themselves, it hasn’t been easy.

“People definitely look at me funny,” said Roberto Mangual, one of the men sheltered in the neighborhood. “I think the community needs to understand that attacking us doesn’t make sense. We don’t have a choice of where to stay.”

A backdrop to much of the anxiety is the fear that the neighborhood, which is today largely white and wealthy, might slip back to the ’70s and ’80s, when crime was soaring and the streets were dangerous. What will happen, members of Mastro’s group ask, if the residents who fled to their weekend homes in the Hamptons and rural retreats upstate during the darkest days of the pandemic don’t come back? Some of the loudest voices online have been from those still away who are leery of returning to a city that feels less tidy and safe than the one they left.

“As the school year started, we saw a lot of families that didn’t return,” noted Rabbi Yosie Levine of The Jewish Center, an Orthodox synagogue. “I can’t say whether it’s forever but this issue has gotten a lot of people’s attention. They’re waiting to see whether people feel safe walking down the street.”

In fact, while murder and shootings are up from a year ago on the Upper West Side and across the city, crime across the board is down, continuing a dramatic drop from previous decades. Homelessness remains steady.

Of course, the past months have been dominated not only by the viral pandemic but by inequality and race. The vast majority of the city’s homeless residents are nonwhite, and some who live on the Upper West Side suspect a whiff of racism in Martin’s group and are more disturbed by that than by the homelessness.

“We want to send the message that they are welcome here,” said Heather Gunn-Rivera, who owns a local business and helped found a counterpoint organization, the Upper West Side Open Hearts Initiative. It set up tables outside the Lucerne Hotel, where more than 200 men have been housed, and offers them free clothes, books, metro passes and voter registration. When word came last Friday evening about the plan to move the men downtown from the Lucerne, Gunn-Rivera’s group said it was devastated and called the mayor cowardly for yielding to pressure. It said the bonds the group had built with the Lucerne men had been powerful and shouldn’t be disturbed.

Gunn-Rivera says the fight is part of a larger challenge: building affordable housing, unpacking privilege, and “aligning ourselves with those in need.”

To which Rabbi Levine said — in this season of Jewish holy days in a neighborhood with two dozen synagogues — the wisdom of the ancient sage Hillel applies: “If I am not for myself, who will be for me? If I am only for myself, what am I?”

Clyde Haberman, a former New York Times metro columnist and Upper West Sider who’s noticed an uptick in barefoot, unbathed men walking by his apartment, said he saw no risk and put the dilemma in more modern terms: “Where do you draw the line between compassion and annoyance?”

As with many controversies, both sides lament how the debate has hardened and devolved so quickly into contemptuous name-calling while digging in their heels.

Part of the problem is how it was handled. The city didn’t consult with local leaders and gave little warning. The men in the Lucerne included addicts; their arrival coincided with the overnight closing of subway stations for cleaning, forcing other homeless men and women onto the streets; several crimes occurred unrelated to the new arrivals.

It began in May when two hotels, the Belleclaire and the Belnord, began housing several hundred homeless people. Since they included women with jobs and since many residents were out of the city, the arrivals produced little stir. The trouble began in late July when some 280 men were taken to the Lucerne in the summer heat.

There were concerns ranging from mask wearing to assault. A liquor store across the street said men tried to steal wine. There was a drug bust, and some of those arrested were from the Lucerne.

They’ve been removed, along with a couple dozen others. Security guards have been hired for the streets, police presence has increased and social-service providers are now based at the hotel.

All of which should’ve eliminated this as a topic of controversy, says Helen Rosenthal, the city council member for the neighborhood. After the men arrived at the Lucerne, her inbox exploded. So did neighborhood calls to 311, the city’s hotline. Rosenthal vowed right away that her area would take in no more homeless.

Now, she said in a phone interview, the situation is under control and she no longer stands by that vow. After the city announced the move of the Lucerne men, she condemned it as caving to pressure. It’s time, she says, to stop focusing on minor threats from 600 people living in nearby hotels and ask larger questions.

As she put it, “We’re in a pandemic of crisis proportions but we’re not even close to what it was like in the 1970s. You do have George Floyd and the question of whether White people are willing to engage in what Black people have suffered for hundreds of years. Now we’re also trying to figure out what’s safe. For those of us who love New York and want to see it come back, we have some big choices to make. The fight over the Lucerne simply exposed them.”

Wed Sep 30 , 2020
J.J. Lemon paused for a moment, sweat dripping off of his face, before ascending an embankment on his mountain bike on a hot and humid Monday morning. The steep climb at the Egg Harbor Township Nature Reserve in Atlantic County fit in perfectly for the amateur mountain bike racer during […] 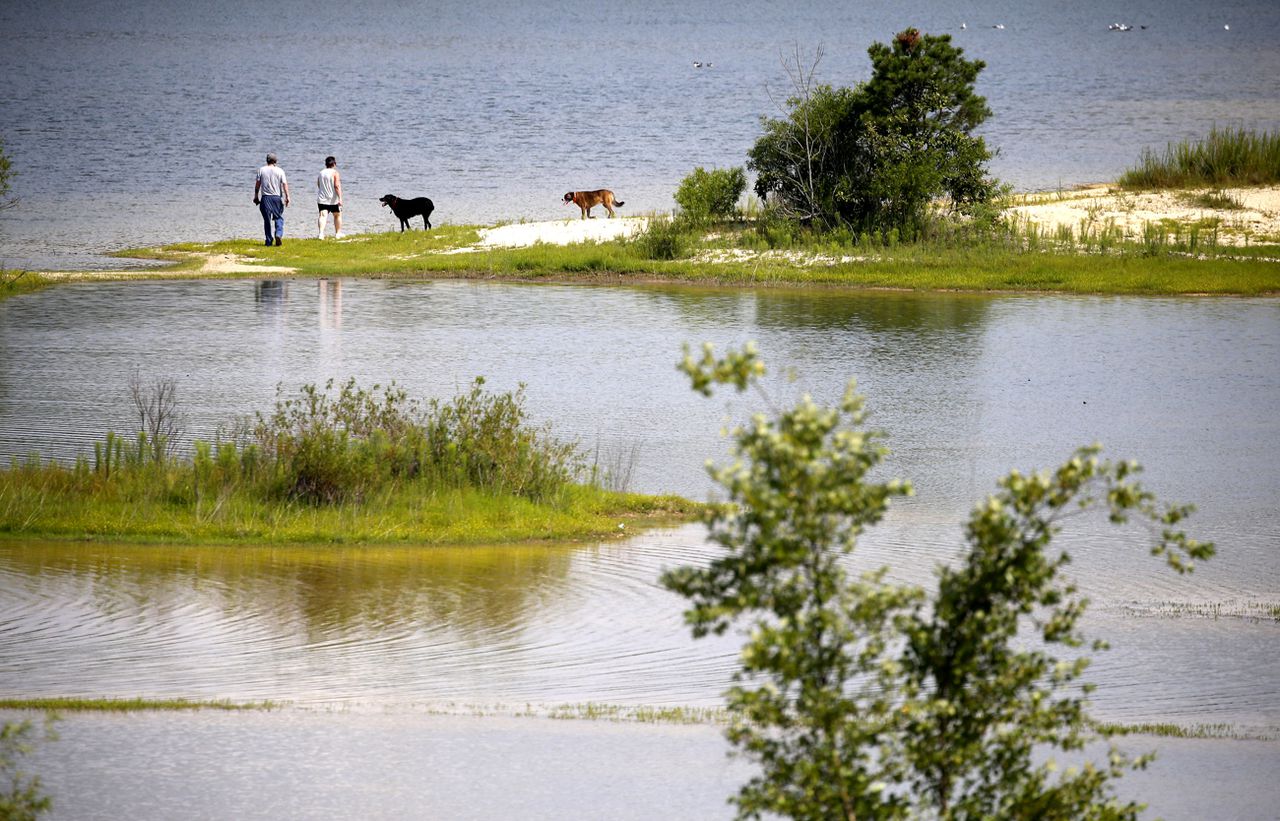