“Nomadland” is a song for the open road. Its protagonist, a pragmatic widow named Fern (Frances McDormand), has lost her husband and her ZIP code. She’s living out of a rusty cargo van, finding short-term jobs throughout the American West. Even with a movie star at the center, the film feels strikingly intimate — hardly the sort of material Hollywood is known for. When we first meet Fern, she’s driving across a highway, singing “What Child Is This?” to herself, blanketed by the infinite night sky.

If “Nomadland” wins Best Picture at the Oscars in April, as it very well may, it would be an unorthodox choice. But this is an unorthodox awards season, so why not follow suit?

The Oscars, a buffet of overpriced politicking, almost never honor the year’s actual best film, making “Nomadland” an automatic outlier. For every “Parasite” or “Moonlight,” there’s a “Green Book” or “Dances With Wolves.” The voting body tends to favor scope, something this movie resists. Despite drawing inspiration from Jessica Bruder’s nonfiction book “Nomadland: Surviving America in the Twenty-First Century,” the film’s political heft is as gentle as its plot. Most of the cast are real itinerants, whether by choice or financial need, whom director Chloé Zhao met while doing research in and around Arizona. In an era when so many movies triple-underline their social consciousness, Zhao has crafted a drama too intelligent to submit to such showboating.

How, then, did “Nomadland’ (now streaming on Hulu) become the year’s front-runner? Well, first of all, we’d have to agree that it is the front-runner, and I’m not sure consensus is possible in a virtual Oscar race. “The Trial of the Chicago 7,” “One Night in Miami,” “Minari,” “Ma Rainey’s Black Bottom,” “Mank,” “Soul” and “Promising Young Woman” are just some of the titles with competing momentum. But reduced theater attendance means box-office popularity isn’t a reliable meter, and the lack of red-carpet fanfare almost gives the impression that awards season isn’t happening at all.

To the degree that anything can muster enthusiasm in this enthusiasm-strained year, “Nomadland” has. Its premiere at the digital Toronto International Film Festival in September elicited rapturous reviews, and immediately a narrative around the movie formed: Zhao is the director of the moment.

This is Zhao’s third feature. Her previous two, 2015’s “Songs My Brothers Taught Me” and 2017’s “The Rider,” also used first-time actors whose experiences shaped the scripts. She coaxed raw performances from all of them, particularly a South Dakota rodeo daredevil (Brady Jandreau) whose career-threatening injury lent “The Rider” a humanistic take on rural masculinity. In Hollywood terms, “Nomadland” represents a mindful step forward. She cast an empathetic A-lister and a well-known character actor (David Strathairn) opposite the movie’s novices, building a bridge toward her next assignment: Marvel’s “Eternals,” starring Angelina Jolie, Kumail Nanjiani, Salma Hayek and Richard Madden.

Leaping from indies to blockbusters is a rite of passage — the way an unsullied director discovers whether his or her idiosyncrasies are transferable to the industry’s big-budget machinery. It’s worked for Ryan Coogler (“Black Panther”), Taika Waititi (“Thor: Ragnarok”) and Paul Greengrass (“The Bourne Supremacy”). Even though a juggernaut like Disney tends to keep filmmakers on a stiff leash, there’s excitement around Zhao’s transition. “I shot exactly the way I wanted to shoot,” she told The Hollywood Reporter. “On location. A lot of magic hour. Three-hundred-sixty degrees on the same camera as I did on ‘Nomadland.’ Same rigs. It’s a bit surreal. I’m still waiting for the shoe to drop. It hasn’t. I think I got lucky in that Marvel wants to take risks and do something different.”

She’s the first Asian woman to spearhead one of the franchise’s installments, and “Nomadland” could make her the first Asian woman nominated for the Best Director Oscar. If she wins, she’ll become the second woman to do so in the awards’ 93-year history. (Kathryn Bigelow was the first.) Earlier this month, Zhao also signed on to write and direct what is being called an “original, futuristic, sci-fi Western” based on “Dracula.” That’s good PR for the broader “Nomadland” campaign. So is the splashy New York magazine cover story Zhao got last week. It all adds up to a true star-making occasion, especially considering most of her competitors (David Fincher, Spike Lee, Regina King, Aaron Sorkin) were already stars.

When the roughly 9,900-member Academy of Motion Picture Arts and Sciences anoints a movie Best Picture, it doubles as a self-portrait. The trophy offers a window into how Tinseltown’s hive mind wants to be seen. “Nomadland” is a pretty ideal embodiment of what cinema can achieve: authentic resilience and fictional enchantment rolled into one. As Fern assures a friend who questions her well-being, “I’m not homeless. I’m just houseless. Not the same thing, right?”

In a year of political chaos, voters may gravitate to overt topicality, à la “Judas and the Black Messiah” or “The Trial of the Chicago 7.” But with “Nomadland,” they’d be opting for something more subtle and, frankly, more powerful. If “Parasite” was a class melodrama disguised as an entertaining thriller, “Nomadland” is a portrait of the post-Great Recession economy filtered through ravishing sunsets. It impeaches the American fairy tale while savoring the country’s scenery.

There’s a scene that best illustrates this film’s resonance. It’s an exchange between McDormand and a 74-year-old nomad named Swankie, who portrays herself. Having just revealed that she has cancer, Swankie tells Fern she plans to leave their shared campsite to return to Alaska, where she has fond memories and would be comfortable dying. A speechless Fern listens to an anecdote about the time she watched baby swallows hatch. “I felt I’d done enough,” Swankie says. “My life was complete. If I died right then, that moment, it’d be perfectly fine.” Fern smiles, a mix of peace and anguish evident on McDormand’s face. The verisimilitude is astonishing; pop culture doesn’t tend to afford off-the-grid lifestyles so much nuance. This is as much a story about adventure as it is stasis. Even the finest Oscar contenders rarely contain such awe-inducing beauty.

Sun Feb 21 , 2021
Denton is a midsize Texas city north of Dallas. This week, it became a microcosm of the cascading crises that has beset the state: electricity blackouts, natural-gas shortages and water problems. Denton and other parts of Texas are experiencing their third straight day of blackouts as a deep freeze created […] 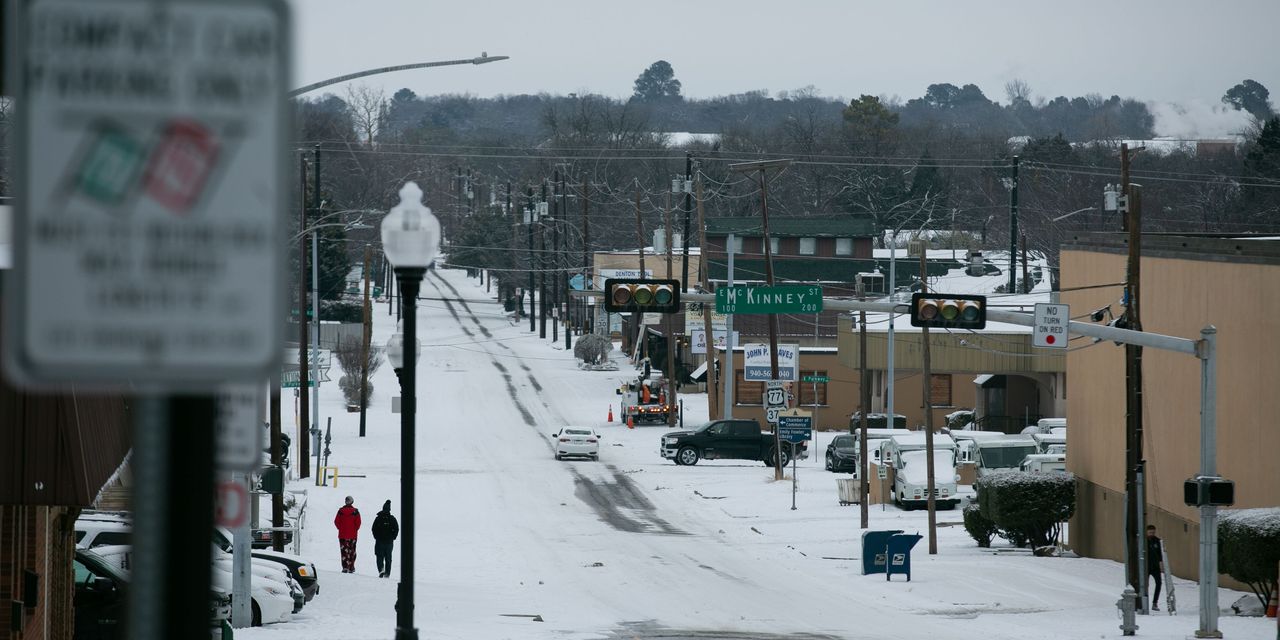