There is perhaps no more telling anecdote about the murky distinction between Nick Offerman, the actor, and Ron Swanson, the fictional Director of the Pawnee City Department of Parks and Recreation he played on Parks and Recreation, than the parting gifts bestowed on the cast and crew shortly after the series ended in 2015.

A little less than a year after the final curtain, series co-creator Mike Schur took to Twitter to reveal that Offerman had carved elegant canoe paddles with the Pawnee City crest emblazoned on them for the entire cast and crew — paddles that were made from wood Offerman had salvaged from the rubble that once was the Parks & Rec set.

It was both a heartfelt tribute to a beloved character, and a testament to how deeply Offerman loves the craft of woodworking. Offerman’s father and uncles had instilled in him a love of woodwork as a child, and he worked his way through theater school building sets for local theaters and framing houses. He opened his own workshop, Offerman Woodshop, in East Los Angeles in 2001 — a good eight years before Ron Swanson came to be.

Mostly self-taught, Offerman may not presume to call himself a master of his craft, but he understands the initial curiosity that drives the budding woodworker. “Once you get into woodworking and start reading about it, you read the words and techniques from much more experienced and wise teachers than this particular donkey jackass actor who has made some tables,” Offerman tells Fatherly. “That’s when you find out you learn things like, ‘Oh, I think I want to actually turn bowls, or I think I want to make a violin, by God, or I want to build a rowboat. Maybe, I just want to carve spoons.”

As the summer of lockdown is in full swing and many are looking for new hobbies or to tackle that big summer project, we asked Offerman for advice. He obliged. So, here you go, your first lesson from a “donkey jackass actor who made some tables” that will either stoke in you a lifelong passion for lumber and sawdust, or will at very least make you appreciate just how much work goes into a simple stool.

Although woodworking is done with your hands, Offerman stresses that you have to get into the right headspace. There are resources for practical research and also works that get you into the spirit of what woodworking is and represents. “I sort of taught myself woodworking before the advent of the Internet,” says Offerman. “My greatest resource by far is a publication that still is printing called Fine Woodworking Magazine. They are also online. All you have to do is dive into a wellspring like Fine Woodworking.”

Some of Offerman’s other favorite resources include:

“When you look at a skyscraper, you don’t say, ‘I could never build that. All I have is a hammer and a bag full of nails’,” says Offerman. “You say, ‘Well, you don’t have to build that.’ All you have to do is put this four by four on this piece of concrete, and now do it again and so forth. One step at a time is a wonderful lesson when tackling any daunting project like that.”

Offerman suggests a simple starting point. “The three-legged stool, one that’s in my woodworking book, Good Clean Fun, is a great beginning project,” he says. “I’m not a great wizard of woodworking despite what television might tell you. Whenever possible, one of the trickiest things about building a seat, for example, or any four-legged item like a table is that if anything is off by the slightest fraction, your table or your chair’s going to wobble. We’re all familiar with that dilemma. A tripod cannot wobble. It is always sturdy. That’s just a good piece of knowledge to save yourself the trouble.”

According to Offerman, a three-legged stool is not only more forgiving for the first-timer, but the process of putting it together sets you up to understand a lot of the basics of woodworking that will carry you through.

“At the top of your leg, you want to reduce it down so that there’s a shoulder, so it looks like there’s a peg on the top of each leg,” he explains. “The peg is what we call a tenon in what way you may have heard of as a mortise and tenon joint. If you make that peg on top of your leg, that’s your tenon and if you drill a hole through the seat, that’s your mortise. That technology is applicable in many applications in woodworking. Quite often, the mortises and tenons are rectangular. On my particular stool, I drilled a hole, but I used square tenons. I drilled a round hole that was smaller than the square of the tenon. Then I used a chisel to turn that circular hole into a square hole. I mean, that’s a great beginning piece. You’ve got a stool seat that’s a reasonable size.”

A Google search for “How to Get Started In Woodworking” leads down the exact wrong path for the newcomer to the craft – namely because nearly all the results focus on the types of tools you need to do this or do that. As Offerman explains, this is the wrong answer to the wrong question.

“I generally try to also eschew any kind of project in my life that requires a large piece of specialized equipment that you would buy,” he says. “I’m not going to buy a pasta making machine and then make pasta once and then you’ve got this expensive albatross.”

Instead, pick a project and then only get the tools — the hand tools — you need. “You can either lean towards hand tools where you’re learning to use a wood plane, which is like a little blade and a sled that shaves the wood to flatten it and surface it the way you want it,” says Offerman. “Or the modern-day mentality would have you reaching for your electric, like Random Orbit Sanders, to smooth it down. One of those funny things about modern life is it seems clear that this loud spinning sanding tool must be more efficacious than this old-fashioned hand push sled. It took me years to learn this because I started in scenery shops where I can sculpt you an automobile with an orbital sander. It’s a mainstay. Once you get into woodworking and you master the chisel and the hand plane and the spokeshave, all which rely on finely-sharpened steel edges, as long as you know how to sharpen your tools well, it actually is often at least as fast, if not faster, to take the electricity out of the equation.”

4. Wreck a Piece of Wood

Woodworking isn’t so much something you master, as much as it is a practice you devote yourself to knowing that each piece of wood will behave differently, and not everything will work the way you want it to each and every time.

“Anytime I’m trying a new project, perhaps the most important step is I get extra wood and I try out all of my tools and techniques on wood that I’m expecting to ruin,” says Offerman. “You get cheaper wood to make your mistakes. You screw it up until you have achieved cutting that mortise or shaping that tenon or using that tool so you have a comfort level with the tool. Even if it’s just a saw, practice.”

So a key lesson is to embrace the mess and learn not just from your own mistakes, but from the mistakes of others.

“We’re not making macaroni and cheese here, but just the general guidelines are good,” says Offerman. “Something that I still do to this day after decades of woodworking is if I’m making a new piece, I can take my time and I can figure out how to make any joinery I need to thanks to all the woodworkers, the clever women and men who came before me who made countless mistakes in order to say, ‘Okay. You guys, I tried out this new router bit and here’s all the ways you can screw it up, but here’s how I figured out is the best way to use it.’”

Offerman benefited from being raised in an environment where woodworking was part of growing up, but even if you’ve never set foot in a woodshop or have even seen a piece of raw lumber in your life, seeking out passionate people is the best way to grow the passion in yourself — and the best way to learn new tips, tricks, and skills.

The post Nick Offerman’s Five-Step Plan to Get You Into Woodworking appeared first on Fatherly.

Wed Jul 15 , 2020
There are occasions when a crisis sparks a wholesale change in the way that America does business. One of those epoch-shifting moments when people are forced to take note of a process they might not have questioned before, only to realize it has to change. Likewise, sometimes it’s a matter […] 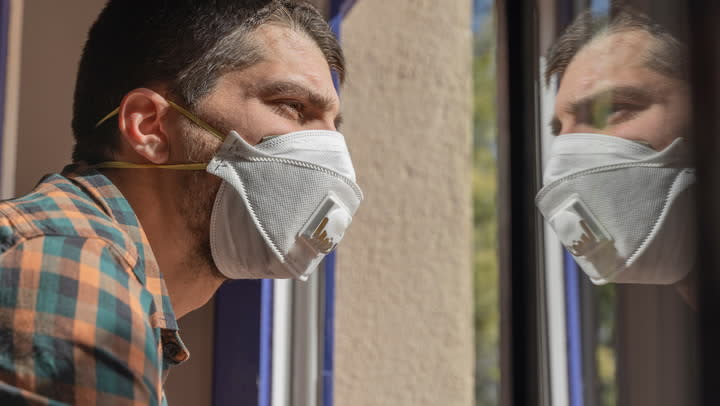