The NHL could go with a temporary realignment of its teams for next season during the COVID-19 pandemic.

The league also is contemplating a reduced schedule and temporary hubs. NHL Commissioner Gary Bettman said realignment could help with ongoing travel restrictions for Canada and mandated quarantines for visiting certain states in the United States. 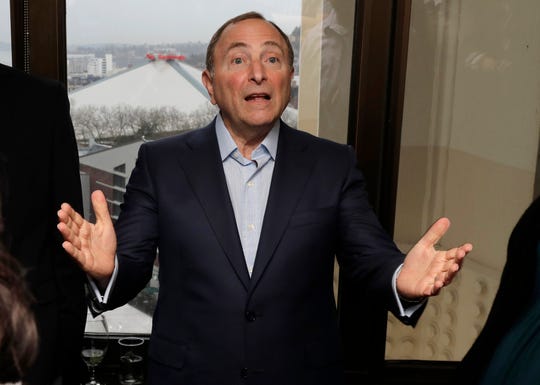 “As it relates to the travel issue, which is obviously the great unknown, we may have to temporarily realign to deal with geography, because having some of our teams travel from Florida to California may not make sense,” Bettman said Tuesday during a Paley International Council Summit panel with NBA Commissioner Adam Silver and baseball Commissioner Rob Manfred.

“It may be that we’re better off – particularly if we’re playing a reduced schedule, which we’re contemplating – keeping it geographically centric and more divisional-based; and realigning, again on a temporary basis, to deal with the travel issues.”

The NHL is targeting a Jan. 1 start for next season. But details are still being worked out in talks between the league and NHL Players’ Association.

The NHL finished last season in bubbles in Toronto and Edmonton, Alberta, but Bettman has ruled out using bubbles for an entire schedule.

“We are exploring the possibility of playing in our own buildings without fans (or) fans where you can, which is going to be an arena-by-arena issue,” Bettman said, according to an ESPN.com report.

“But we’re also exploring the possibility of a hub. You’ll come in. You’ll play for 10 to 12 days. You’ll play a bunch of games without traveling. You’ll go back, go home for a week, be with your family. We’ll have our testing protocols and all the other things you need.”

The NHL also could use a hybrid model with some teams in a bubble and some at home, and teams moving in and out of the situations, Bettman said.

15 tips for hosting a virtual offsite for your remote team

Wed Nov 11 , 2020
It was January 2020 and our 140+ team had just gathered in a large hotel conference room for another one of our bi-annual offsites. Ahead lay the whole day and night of strategic team alignment and most importantly — relationship building. Today, several months and hundreds of Zoom calls later, […]