The coronavirus pandemic has disrupted much of New York City’s normal rhythms of travel, with many people now hopping on to bicycles rather than the subway. A design competition could now solidify these changes by offering up a revamped version of the famous Brooklyn Bridge.

Related: If McDonald’s is reopening, why not schools? It’s complicated | Emma Brockes

The public will be able to vote online over the next week for one of six finalist designs chosen for the bridge, which opened in 1883 to connect Brooklyn and Manhattan and has since become a popular magnet for tourists as well as vital route for commuters.

The New York city council launched the design competition earlier this year, along with the non-profit architectural organization Van Alen, amid concerns the bridge was becoming overcrowded and cumbersome for users.

An average of 16,500 pedestrians crossed the bridge each day last year, with the number of cyclists doubling over the previous decade. A narrow walkway, divided between pedestrians and cyclists, is suspended above six lanes of car traffic. This space can often be hazardous, with cyclists having to dodge selfie-taking tourists.

“People can’t cycle over the bridge now. It’s nearly impossible,” said the city council speaker, Corey Johnson, in February. “We need to figure out a way to make the bridge safer – safer for pedestrians, safer for cyclists.”

The six design finalists include a plan that would phase out car lanes, replacing them with a colourful, winding walkway. Another offering would expand the wooden walkway with sustainably sourced planks from a community in Guatemala that is protecting a 2,000-acre rainforest in the country and place biodiverse “microforests” at each end of the bridge.

A further finalist would separate cyclists by giving them a section of the bridge currently dedicated to cars, with trains replacing cars in another section.

The push to revamp the bridge has gained extra potency during the coronavirus pandemic, where an increased number of cyclists, concerns over social distancing and a surge in alfresco dining have led to scores of streets closed off to cars in favor of people.

“For too long, the Brooklyn Bridge has been more geared toward serving cars than people,” said Regina Myer, president of the Downtown Brooklyn Partnership and a competition juror. “This competition is a unique opportunity to rethink that balance at a time when the city is facing an outsized need for public space.”

There is no guarantee the winning design will be implemented by the city, although transport officials have conducted an inspection of the bridge’s famous cables to ascertain whether the structure could host an expanded walkway.

Fri Jul 24 , 2020
PR supplied Angus Thirlwell’s raison d’être is more fun than most: to make people happy through chocolate. The Hotel Chocolat boss said this morning “it’s a good reason to get out of bed”, and investors appeared to agree. The Covid outbreak has hammered the stock, which had steadily grown to […] 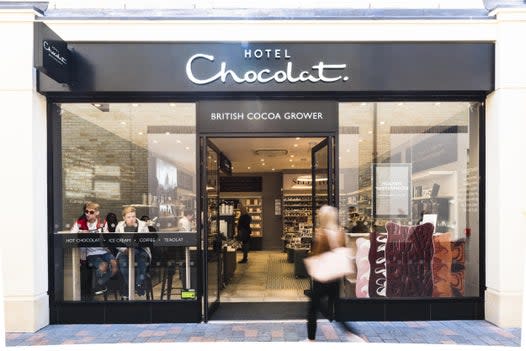