This Week In Online Travel

You are a top executive making all the important decisions at a major online travel company, and you’ve spent billions of dollars on Google advertising. Along comes the pandemic and you ask Google for a break on your outstanding bills because even your own business partners aren’t paying their invoices to you, either.

What was it like behind the scenes in these talks? You’d figure that Google would hand out a few favors to some of its biggest advertisers. Nope.

I spoke privately this week with a C-suite executive, who declined to be identified for obvious reasons, about his frustrations in negotiating with Google. The search engine forgave nothing on outstanding bills, and offered a slightly deeper discount than the travel brand already had on future advertising on a related platform, but to get the lower rates the volume commitments would be so large as to be impractical to take advantage of.

Google was insincere in the bargaining, the executive said, although he used a harsher term, referring to those future discounts that the company would never use. “I didn’t expect anything to come out of it. They have a monopoly, I mean, let’s be honest. We are all grownups, and they leverage their market power and that’s what they do. That’s their right — until it isn’t.”

The “until it isn’t” statement was a reference to the prospect that regulators in the United States and Europe might take steps to crimp Google’s market power.

The executive recalled that Google routinely threatens to shut off the advertising of travel brands that don’t pay their bills.

“If we don’t help each other in this situation, when would you do that ever?” the executive said with a dismissive laugh.

“To me, it‘s more of a mindset,’” the executive said. “We’ve told our partners, you’ll have to pay us but maybe later, or perhaps partially now. But let’s find a solution; let’s do it together. I explain to you what my problem is. You explain your problem.”

Other partners offered the travel brand free advertising to get through the pandemic, but from Google, “nothing was coming,” he said.

Look, let’s face it: A lot of travel brands are angry that deep-pocketed Google didn’t do more to assist a deeply suffering travel industry. But, hey, hosts are likewise miffed that Airbnb didn’t send larger payments to compensate them for cancelled bookings. Booking.com, which has more liquidity than most competitors to survive the crisis, is forgiving some commission payments in a temporary promotional campaign, but hasn’t done much.

Skift reported last week that Google gave a break of less than 10 percent in total to eight online travel companies that wrote Google a public letter pleading to give them a break on their $80 million in first quarter advertising bills. One of the companies characterized the discount as “a joke.”

Speaking at a Skift summit on online travel last week, Rob Torres, Google’s managing director for travel, said Google is attempting to assist partners on numerous fronts. “We are trying to do what we can to actually help everyone get out of this,” Torres said, referring to a very modest advertiser recovery program, and an expanded plan to enable some advertisers to pay commissions for stays instead of cost per clicks. “But ultimately Google’s not immune to what’s happening with the global economy either. And there’s only so much you can do. I think people are always going to say it’s not enough. But we are certainly trying to do what we can and, like I said, my partners and my team are trying to work closer than ever with their partners and their teams to help them come through with this stronger than ever.” Google declined to make any additional comment Tuesday.

But the C-suite online travel executive, whom Skift spoke with this week, will likely have a long memory about Google’s stance. “It’s clear that Google is only focusing on their own economic benefit, and that’s been clear for some time,” the online travel boss said. “And that’s their choice, and that’s fine. I think that’s wrong, and that will hurt them …”

With those antitrust investigations heating up, you can bet regulators are getting a lot of correspondence from Google’s travel advertisers.

Short-term rental platform Domio is negotiating management contracts — you know, the kind that Hilton and Marriott love — for entire buildings instead of getting stuck in sometimes-problematic master leases. Each have their advantages/disadvantages but management contracts are an interesting twist.

Woah, but never mind. It’s the kind of headline that sounds interesting but I’m betting it won’t amount to much. Believe me, most travel agents, intent on servicing luxury clients, aren’t looking to share revenue with or collect fees from Tripadvisor. Phocuswire

Skift has speculated in the past that online travel companies could potentially launch hotel brands, making a pitch to property owners that the online travel brands can undercut the chains. Kayak’s Steve Hafner floated the idea, and claims the Booking Holdings company is readying an announcement. It’s more likely a tech play, but let’s see. Skift

Vacasa, the short-term rental property management company, fresh off $108 million funding round led by Silver Lake, acquired a local competitor, Vail Resort Rentals, for an undisclosed sum. You can expect tons of these types of opportunistic acquisitions across all travel sectors in the next couple of years. Vail Daily

Indonesian online travel agency Traveloka picked up an additional $250 million in funding, with Qatar Investment Authority leading the round. Of course, the funding infusion came at a lower valuation, $3 billion. After all, those declining valuations are going around these days. Nikkei Asian Review

The European Commission is asking for input and taking another look at online travel agency-hotel rate parity clauses, and whether national bans of such contract language really enhanced competition in hotel distribution. It would be optimal to have uniform policies across Europe instead of the current mish-mash. European Commission

Wed Jul 29 , 2020
Mecca (Saudi Arabia) (AFP) – Mask-clad Muslim pilgrims on Wednesday began the annual hajj, dramatically downsized this year as the Saudi hosts strive to prevent a coronavirus outbreak during the five-day pilgrimage. The hajj, one of the five pillars of Islam and a must for able-bodied Muslims at least once […] 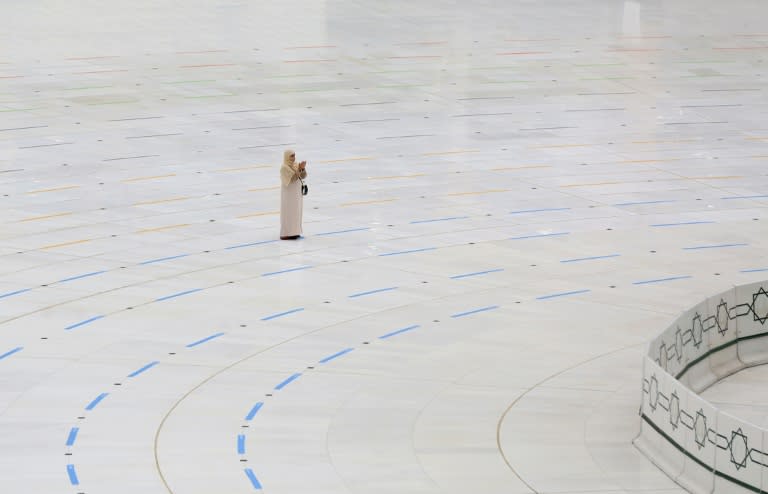