Before their votes during the online meeting, commissioners warned not to expect such an easy time for next year’s spending plan.

“Those of who stay here are going to face a lot of problems in the future budgets,” said Commissioner Rebeca Sosa, one of six commissioners assured seats in 2021 on the 13-seat board, which is facing historic churn this fall from term limits.

“I am very concerned about next year,” said Commissioner Jose “Pepe” Diaz, who, like Sosa, doesn’t have to leave his seat until 2022. “Nobody is giving a happy face to next year’s budget… We need to continue to tighten the belt.“

It was also the final budget proposed by Mayor Carlos Gimenez in his second term as he prepares to leave office in November.

The Republican candidate for Florida’s 26th Congressional District, Gimenez’s did not impose the layoffs or service cuts in his 2021 spending plan that Miami-Dade saw early in his administration, when a real estate crash sent values tumbling and a newly elected mayor won a cut in property-tax rates.

“This year was difficult,” Gimenez said. “Next year, I believe, will be even harder if we do not see improvements in the economy.”

Bolstered by nearly $1 billion in federal relief from the CARES Act and transportation aid, Gimenez was able to propose a budget that increased spending 1.6% across county government, which includes Miami International Airport and PortMiami. Spending in the $2.2 billion general funds, which pay for police, jails, roads and other core services, grew about 4%.

The budget includes expanded library hours and less than a 1% boost in hiring for a payroll of about 28,000 people, including more slots for police. In the wake of alarming fish kills in Biscayne Bay after years of warning of spreading pollution issues, the 2021 budget includes funding for a “chief bay officer” to have responsibility for improving water quality in Biscayne.

Property taxes generate about 70 cents of every dollar of general-fund revenue, and the 2021 revenues are based on real estate values in place at the start of 2020. That was months before the coronavirus emergency arrived in March, sparking unprecedented government shutdowns of businesses, crippling tourism and sending unemployment from 1.5% in January to 14.2% in July.

The Gimenez budget cuts in half the growth forecasts for property-tax revenues but doesn’t predict a decline, with growth expected to bottom out at 2% in 2022. Weaker forecasts would have predicted even more pain in future years, since the spending plan projects a $32 million revenue gap by 2022. The red ink grows after that, hitting a projected $180 million by 2025.

Most of the budget passed easily, but commissioners took a narrow vote on the legislation that set higher water fees for 2021. Four of the 13 commissioners joined Diaz in voting against it: Joe Martinez, Javier Souto, Xavier Suarez, and Esteban “Steve” Bovo Jr., a candidate for mayor in November. His opponent, Commissioner Daniella Levine Cava, was among the eight commissioners who voted Yes.

Jean Monestime was on the Yes side, but he criticized Gimenez for not proposing a budget that addressed more needs in the county. “This is a very, very safe budget,” he said. “I’m a little disappointed, because I’ve seen the administration present stronger budgets when things were tighter.”

This was the first Miami-Dade budget passed entirely online, with commissioners, staff and members of the public participating by Zoom and by phone during the two September budget hearings that concluded Thursday with a final vote shortly after 9 p.m.

Multiple members of the public, including commission candidate Raquel Regalado, said they were unable to participate online because of technical malfunctions with the county’s meeting portal. “First the website wasn’t working,” Regalado said in a text message. “I called, and while put in as a speaker, the system bumped a bunch of us to listen only.”

The votes followed two hours of public comment, and they mirrored the theme of the first budget hearing on Sept. 3.

Activist groups, including Dream Defenders and Catalyst Miami, helped organize speakers to urge commissioners to reduce the county’s $781 million police budget and use the dollars to boost housing and mental-health programs. They also opposed plans to spend $400 million to replace some of the county’s aging jail facilities, arguing Miami-Dade should reduce the inmate population instead.

“New jails are not the solution,” Maya Ragsdale told commissioners.

Chris Garcia-Wilde, a University of Miami medical center worker, asked commissioners to pursue a “sobering center” that can temporarily care for high or intoxicated people who otherwise might land in jail or the tax-funded Jackson hospital system for the night. “Emergency room visits cost two-and-a-half times more than sobering-center visits,” he said. “Sobering centers will save our county a lot of money.”

No commissioner spoke in favor of police cuts, but Levine Cava praised the calls to spend more on services and to expand the county’s existing programs aimed at reducing jail time for some offenders.

“We need our neighborhoods to be protected through true community policing,” she said. “We need to obviously make sure our communities are safe, through the kind of public safety investments that many of the speakers addressed — adequate access to housing and the range of social services that help keep people safe, as well as policing”

“People invest in areas that are secure and safe,” he said before the budget votes. “This talk of defunding the police… it does not speak to the wishes of the taxpayers. Some limousine liberals may think it’s a good idea.”

Fri Sep 18 , 2020
(Bloomberg) — London Mayor Sadiq Khan said further measures may be announced in the next few days and weeks to contain infections in the capital amid reports of a surge in virus cases. Estimates for England from the Official for National Statistics (ONS) published on Friday suggest there were 6,000 […] 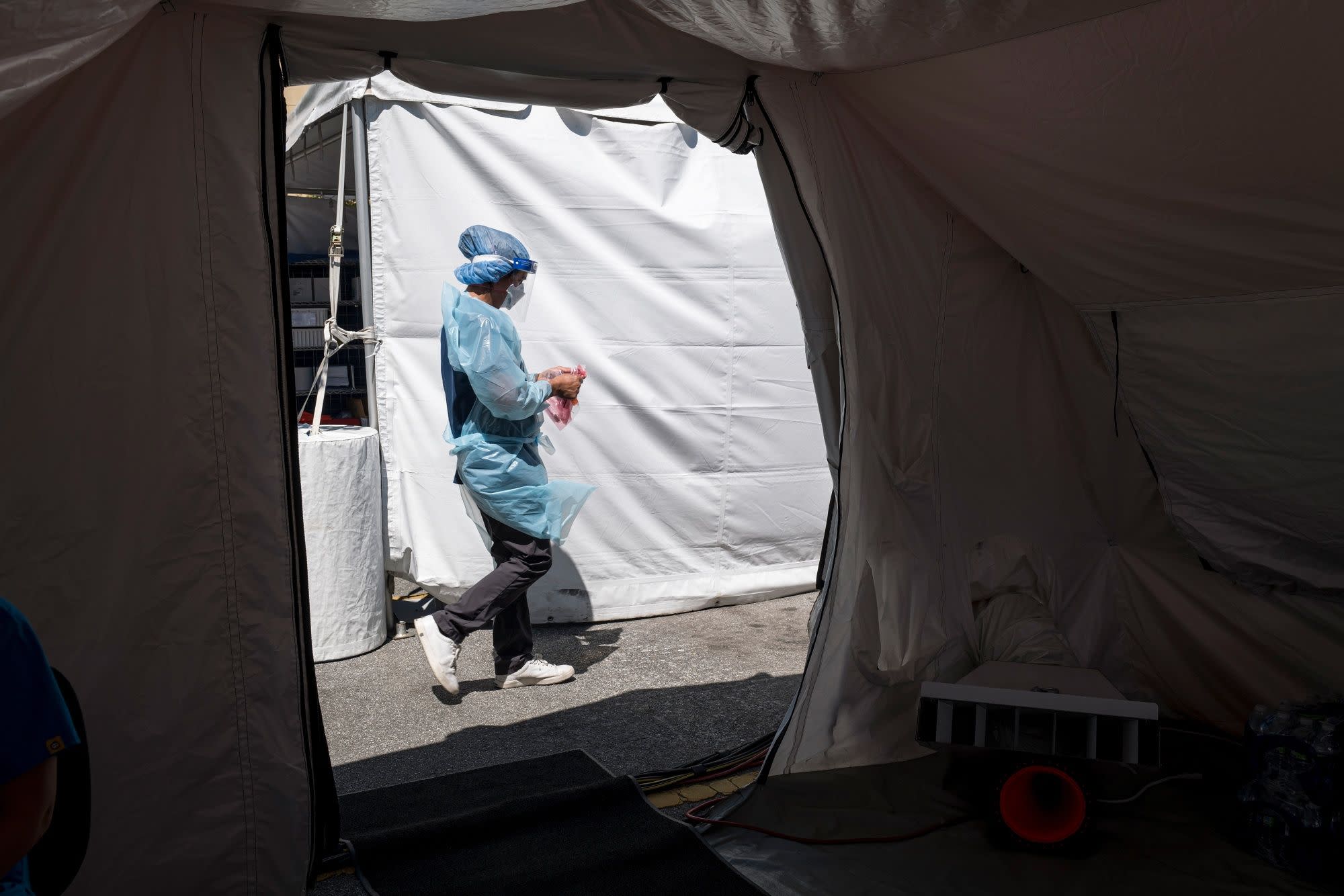