University of Miami football coach Manny Diaz made a surprise appearance during a Zoom videoconference with the media late Tuesday night.

He spoke about everything from the first five days of practice to handling coronavirus-related matters to the news of the Big Ten and Pac-10 announcing they won’t play football this season.

“Here at the University of Miami our focus is on what we can control,’’ Diaz said. “We’re aware of the news going on around the country but that doesn’t really change what’s going on here. What our players and our staff can control is No. 1 staying healthy, with all the methods and protocols we have put in place here and show an example that we can play football and we can keep this virus out of our building.

“This is 2020. This is a day-by-day, week-by-week year. but I am proud of our guys in terms of the way they’ve competed in the first five days of practice. It’s been fun to watch them play. It’s been fun to have the sanctuary of the practice field, where they can not think about tomorrow and just be present where they are and enjoy the game that they love.

▪ When asked how he keeps his players calm and secure when he tells them about what’s happening around college football, Diaz said, “We tell them what we know.’’ Diaz said they take their guidance from UM president Julio Frenk, a physician who served as the Minister of Health in Mexico. “We’re being guided through this with an expert in this field, and so we sort of take his guidance…

“It’s easy to get caught up in all the negativity on the outside…It’s hard for all of us. We overcommunicate in this program. We address the elephant in the room every day and we’re always transparent about what’s going on.’’

▪ Diaz said the medical experts on campus are always communicating with him and they explore everything, including possibly testing the players more than just the 72 hours mandated before a game. “There may be more testing…Even the ACC [medical protocol] document is a fluid document.’’

▪ Diaz said his players are aware that the other students are returning now to campus for the beginning of school next week in regard of staying cautious. “The notion that our players have been sitting around in the city of Miami in their dorm room or apartment room with no other people in the 18- to 22-year-old age bracket is a little bit far-fetched, right? They are certainly aware of the narrative of what will happen when the students come back on campus. But they’ve been making these decision now since the middle of June. They’ve been doing a good job. Is it going to be more complicated? We preach that every day.’’

▪ What are Diaz’s emotions being able to practice now knowing so many great football players now are not as fortunate as you are? “We feel thankful to be on the field. There was a time in March, April, May, June, even part of July, we were not sure we would be given the green light to go… Our players get that. Is there uncertainty? Yes. But we have the ability to control it. This is not a random thing. We can do our part, which they have done since June 15.

“If we continue to stay strong and do our part and protect each other we know we can keep the spread down.’’

▪ Regarding the players around the country and their social messaging on wanting to play this season and if it can make a difference: “We want them to be able to speak their truth. We want them to know that their voice matters. We know that narratives play a big role. I do think there are times that narratives set policy…You know what, we need to express our opinions.

“The messaging we gave our team today, the hashtag #WeWantToPlay or #WeWantToCoach what that really means is we want to do everything we have to do in order to play…They understand the duty that comes with that.’’

▪ Should players from Big Ten or Pac-12 be able to freely transfer now, would that be something Diaz would look into or is that opening Pandora’s box? “It’s all happening in real time… In 2020 we’re living in times that have no precedent. I think someone is going to come up with a ruling on that. …Look, that’s why we all went conference only, because different parts of the country were going to respond in different ways… Now with the law of unintended consequences we’ve got to figure all that out.’’

▪ UM students will be taking a hybrid schedule that allows the classroom to have only half the attendance spread out and wearing masks, and the other half online.

▪ Did you even think about creating a bubble with your team?

“You mean take the entire team in a hotel for the entire semester? That’s not plausible in college athletics, not to mention they have to go to class…We all create our own bubble, and that simply who you choose to put yourself in close contact with, especially without a mask on.’’

In closing, Diaz said “the All-ACC schedule is going to be a really exciting thing… But I keep going back to that this year has been relentless in teaching this lesson: You start thinking about three weeks from now, you’re going to get your butt kicked today.

“…No one has decided we’re playing the season. What we’ve decided on is we want to have the chance. We’re saying, ‘Hey, let’s see if we can navigate this thing here week by week and give ourselves the chance to play the season.’’’

▪ DE Greg Rousseau has “measurables that were certainly first-round measurables. He’s one of the most wonderful kids I’ve ever coached in 35 years. He was a total package guy.’’

▪ Former UCLA end Jaelan Phillips and graduate transfer Quincy Roche should dominate at defensive end, with redshirt freshman Jahfari Harvey the third in the rotation. Stroud is looking for No. 4 and 5. He said redshirt freshman Cameron Williams “really shows promise.’’ Freshman Chantz Williams went from 238 pounds to 261 in the pandemic and has now “settled down into 255.’’

▪ “Roche,’’ Stroud said, “has been solid as a rock’’ and has “never wavered’’ about staying at UM, depending on the ACC circumstances this fall. “He came here for a reason. He came here to improve his draft status.’’

▪ Stroud said he would put Phillips in the “99th percentile of any player I’ve ever coached in terms of physical attributes. He weighs 270 pounds now and runs like a safety.’’ Phillips later told reporters he weighed 225 when he got to UM last year.

▪ Stroud said 6-4, 262-pound Jason Blissett, a redshirt freshman out of Queens, N.Y., has moved from defensive end to defensive tackle “and is doing a great job.’’

Wed Aug 12 , 2020
BOSTON — Joe Kennedy was once thought to be such a lock to defeat Sen. Ed Markey that there was widespread speculation in Massachusetts that Markey might just retire to avoid a humbling end. But Markey is piling up endorsements and closing in on the young congressman in the polls […] 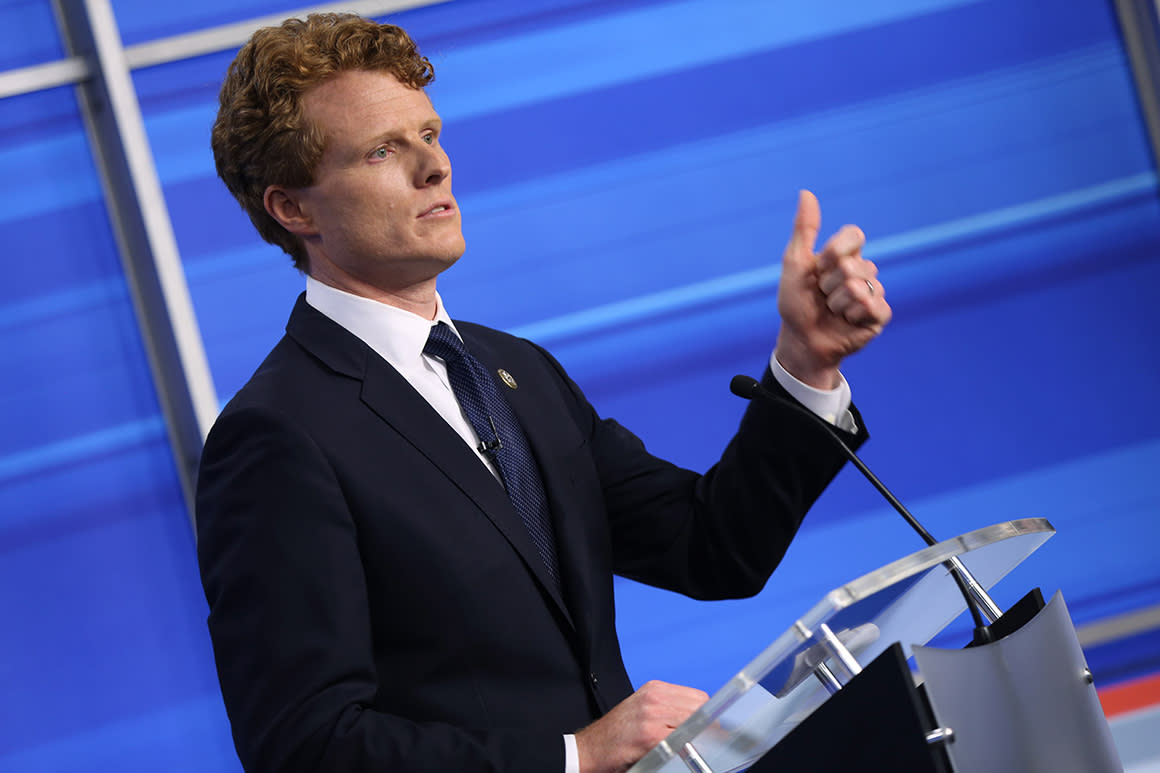