Salt, sugar, and a slab of fish. This, truly, is the full list of ingredients you need to make cured salmon at home. But, if you’re so inclined, you can absolutely make things a touch more interesting. Spices, spirits, herbs, and other flavorful ingredients, such as fresh beets or horseradish, are great for making your home-cured fish just a little bit extra.

This doesn’t have to be a huge undertaking. First, that slab of fish can be any size—and almost any kind of fish (more on that later)—you want it to be. In the mood to cure a whole side of salmon? Great! (You’re going to need a lot of sugar and salt.) Is a one-portion fillet of ocean trout more in your line? You can do that, too. (You’ll need significantly less sugar and salt!) In fact, both Dianna Daoheung, chef/co-founder of Black Seed Bagels, and Kat Romanow, co-founder of The Wandering Chew, agree that curing a single portion of fish is a great way to get your bearings.

“We all want our kitchens to look like the [legendary] Russ and Daughters fish counter,” says Daoheung, “but, buying a whole side of salmon is a real commitment.” If you’re new to fish-curing, she recommends “starting with a single fillet”—or several single fillets, so that you can experiment with ratios and flavor combinations.

Let’s break for a note on terminology: Lox means any salt-cured fish (usually salmon) that is not smoked. Gravlax is a type of lox, always salmon, and implies that the main flavoring is dill. Of course, there’s a little more to it than that, but for today’s purposes that’s all you really need to know. Smoked salmon is an entirely different kind of curing, which we won’t be getting into here, but for the record, you can totally make that at home, too.


Now for the nitty gritty: When making a cure, that is, the mix you’ll use to cover the fish, the general rule of thumb is to use equal parts salt and sugar. Romanow’s go-to ratio for lox is ¼ cup kosher salt to ¼ cup granulated sugar to 1½ to 2 pounds skin-on fish to 4½ tablespoons spice mix. However, some recipes use a larger volume of salt and sugar, up to ½ cup each (or more) for a 2-pound portion of fish. This is really a matter of preference, but the point is that you want enough cure to cover the fish entirely—it’s much more than you would use to simply season a piece of fish for cooking.

You can also play with the 1:1 salt to sugar ratio, as long as you maintain a minimum ¼ cup salt per 2 pounds of fish. Make a 2:1 cure (2 parts salt, 1 part sugar), or even the reverse. Daoheung’s gravlax cure starts with 1 cup kosher salt to 1½ cups brown sugar for a 3 to 4 pound whole salmon fillet. If you plan to flavor the fish with an ingredient that is inherently sweet, such as grated fresh beets or carrots, you may want to reduce the sugar so that you don’t end up with something that tastes like candied fish (unless that’s what you’re into).

In her recipe for beet-cured lox, Daoheung relies on a 4:1 ratio—that’s 1 cup of kosher salt and ¼ cup granulated sugar. She mixes the two together and then sprinkles it over a 2-pound piece of salmon until the fish is totally covered. Next, she adds a layer of grated fresh beets mixed with horseradish, and then places a few whole sprigs of dill on top before wrapping everything up (really well) in plastic wrap (three layers is ideal). The plastic wrap is an unfortunate necessity, even if you’re trying to keep a more-sustainable kitchen—although if you’re working with a piece of fish that’s small enough to fit in a Stasher bag or the like, you could certainly use that instead. Just be sure to press out as much air as possible before sealing.

As the salt and sugar dissolve, they start to extract moisture from the fish. The plastic keeps all of the juices contained, so they can continue to cure the fish for as long as you let it marinate (usually about three days). Meanwhile, any spices or herbs or other additions you’ve included in the cure will begin to flavor the flesh, and in the case of something like beets, color it, too.

You’ll also want to put a weight on top of the fish: Lay the wrapped fillet flat in a baking dish and then place another baking dish or sheet pan on top of the fish. Set a few cans or containers of yogurt or condiments on top—nothing too heavy, but something that will compress the fish as the cure works its magic. You can flip the fish once or twice a day if you’d like to ensure it’s curing evenly, but that’s not totally necessary. Once the fish feels firm to the touch, it’s ready. You can simply brush away any excess cure and flavoring agents—or, if you’d like, rinse it under cold water and then thoroughly pat dry.

To serve, slice the fish at a steep angle, turning the knife slightly to cut thin slices away from the skin as you go. Only slice what you want to eat in a sitting, and wrap any remaining fish up to enjoy at a later date. The rinsed fish should be good for about one week.

How to spice up your at-home fish curing

Ready to play with flavor? While managing the kitchen at the now-shuttered Fletchers Espace Culinaire inside the Museum of Jewish Montreal, Romanow developed spice blends that honored the city and echoed the Jewish culinary diaspora. “We wanted to find a way to bring the flavors of Montreal smoked meat into [the restaurant] without smoking and marinating and brining a whole brisket,” she recently told me by phone, “so we came up with smoked meat–spiced gravlax,” which is perfumed with the spices and aromatics used to make that Montreal classic. She’s also infused salmon with Montreal steak seasoning, ras el hanout, and has made versions with ground pu-erh or lapsang souchong tea leaves to give the salmon a smoky taste.

Citrus and herbs can perk up cured fish, too. Add the finely grated zest of an orange, lemon, grapefruit (or a combination) for a bright, floral addition. Toss in fresh dill, tarragon, thyme, fennel fronds, or another herb to bring in their grassy freshness.

© Photo by Aubrie Pick
This salmon is made with a 1:2 cure flavored with shiso leaves.


Playing with the size of these ingredients is another way to adjust the flavor. In Daoheung’s recipe, the dill is left in whole sprigs, which gives the salmon a light dill flavor. Want a bigger punch? Blend the herbs right into the salt and sugar mix. Same goes for the citrus: Peel the zest into big, wide strips (avoiding the white pith) for a more delicate approach, or grate smaller to increase the surface area so the citrus oils disperse more quickly and vigorously throughout (a good idea if you’re working with a smaller piece of fish which will cure in less time).

As for spices, Romanow says it’s best to use ground or crushed spices, not whole, to better expose their flavor to the fish. Start with about 4½ tablespoons of ground spice, zest, or finely chopped herbs per ¼ cup kosher salt and adjust to your preference from there.

Spirits, too, have long been used as a preservative for cured fish. And while they certainly aren’t required for home-curing, should you like, they’re a great way to introduce even more flavor. Aquavit, a neutral spirit frequently accented with caraway (that’s the flavor often associated with rye bread), is a common addition. Daoheung uses gin in her gravlax recipe (add some juniper berries and lemon zest to your cure for a true gin-flavored lox). Anise-flavored spirits like pastis or ouzo are great, too. Or vodka. Did the idea of smoky cured salmon above appeal to you? Maybe you want to use Scotch? Whichever you choose, don’t use too much, just about 1 tablespoon per pound of fish is enough. Use a basting brush to evenly coat the fish—or drizzle it on and rub all over with really clean hands—before laying on the cure.

Accents aside, Daoheung notes that the real key is starting with a good piece of fish. “I like using farm-raised as there is a smaller chance the fish will have parasites,” she says. If you are worried about parasites, Daoheung suggests “freezing the fish [for 1 to 3 days] before curing it,” which will kill anything of concern.

As for where to buy, you can secure great fish via many online resources these days. Or, if you’re lucky enough to have a reputable fish market near you, you could ask the staff there about what in their inventory would be best for curing rather than cooking. (If it says sushi-grade, that’s a good sign.) Choose fatty, meaty fillets, like salmon, steelhead trout, or bluefish. Daoheung also recommends black cod (a.k.a. sable), mackerel, or tuna—or, again, whatever your fishmonger recommends, since they’ll know what arrived most recently.

Seals seem to like floating platform off Alameda shoreline

Sun Jan 17 , 2021
Harbor seals, those sleek and slinky residents of San Francisco Bay, now have a new venue where they can bask after swimming — a floating platform just offshore between Encinal Beach and the USS Hornet museum in Alameda. Harbor seals prey on anchovies, herring and bottom-dwelling fish in the bay, […] 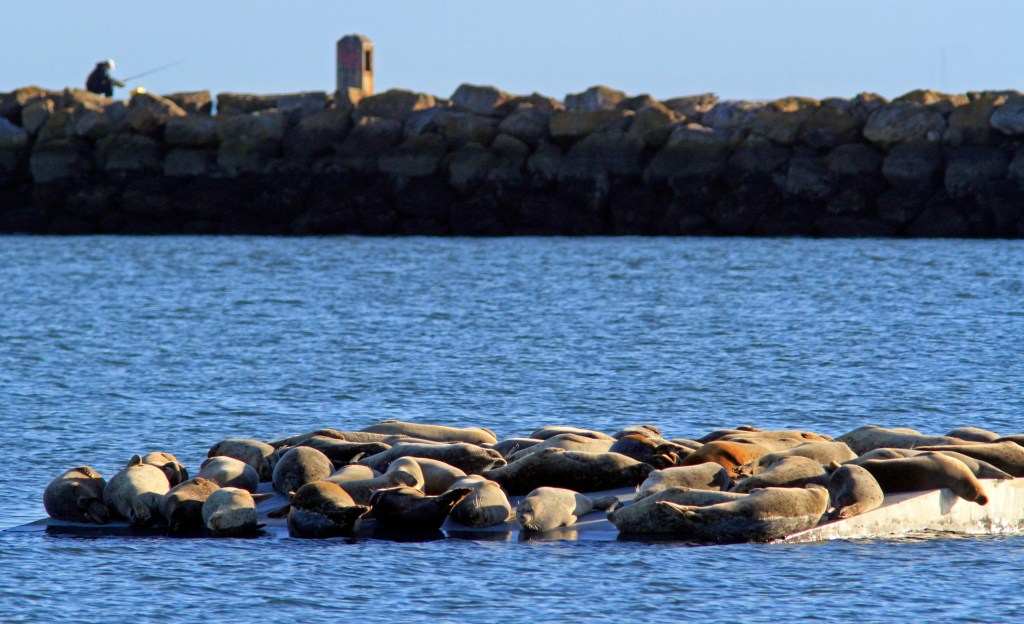