Telework has life-changing benefits but it also has its downsides because your days can become repetitive, which can lead to disengagement and burnout.

It’s not just you. The workday working from home during the coronavirus pandemic doesn’t just feel longer. For many of us, it actually is longer.

The very technology that enables us to do our jobs from most anywhere also makes it that much harder to step away. For Tina Schweiger, spending 12-hour-plus workdays staring at laptops has become far too familiar.

The owner of a small startup and tech consultant in Austin, Texas, Schweiger, is typically in front of a screen before 7 a.m. to begin her self-described “thought-intensive tasks” before her husband and two young sons are awake.

Between constantly sending and answering emails, attending a fair share of online meetings (with her boys or dogs likely pop up on screen at any given moment), finishing a project or impressing potential investors, Schweiger said her day often disappears. 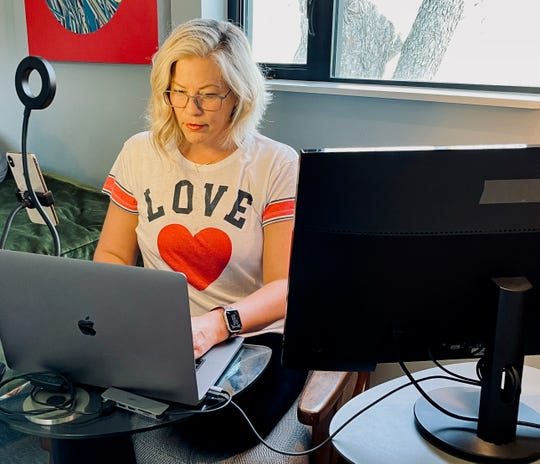 If that isn’t enough, Schweiger takes an emotional intelligence course online toward her master’s degree in industrial and organizational psychology from Harvard University.

“Sometimes I take a shower; sometimes I don’t,” she laughs. “It’s still not that safe to do a lot of things because of COVID, and if you enjoy working, you tend to scale it up. You’ll say, ‘Oh, I’ll do a bit more research, and maybe I’ll knock this email out.’ It can be very easy to slip in and out of work.”

Since the World Health Organization declared a global pandemic a year ago, many companies allow employees to work remotely, and in some cases, permanently. Screens, keyboards, and computer mice on dining room tables are now commonplace, and videoconferencing is the new normal.

However, the convenience of having that technology at home is creating a never-ending workday for some employees who struggle to decide when it’s time to turn off the switch. A Harvard Business School study of more than 3 million people in 16 cities worldwide found that the average workday increased by 48.5 minutes during the pandemic’s early stages.

About 40% of hybrid or remote employees say their workdays have become longer in the last 12 months, according to a new Gartner study. About 67% of employees surveyed agree that their expectations of flexibly working have increased, and 55% of them agree that flexibility is a factor in whether they stay with their employers, the study shows. 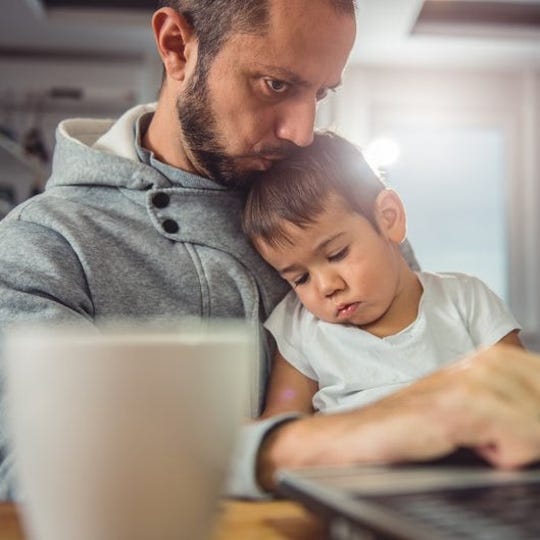 Longer workdays during the pandemic are fueling a phenomenon amid COVID-19 called “always-on fatigue,” according to Gartner researcher Alexia Cambon. (Photo: Getty Images)

What’s ‘Zoom fatigue’? Here’s why video calls can be so exhausting

Yes, your ‘Zoom fatigue’ is real: Here’s how to address it

“The traditional 9-to-5 doesn’t make sense today because there’s this ecosystem where we’re working all of the time from home, and there are more interruptions whether they are work, personal or family-related,” Cambon said. “We need to put up some guardrails because it’s not good for our mental health, as trying to strike a balance is becoming tough.”

Cambon said among the main issues that lead to more extended workdays at home are digital distractions and virtual overloads, prompting problems with disconnecting.

Among the top distractions are unscheduled work-related video meetings, either in a group or one-on-one, that compensate for in-person interactions. Cambon said her research shows a growing consensus that virtual interactions among employees are “more tiring and stressful” than in person.

Those reasons include that it could be harder to gauge co-workers’ body language. There’s also more visual information to digest, and being seen on camera encourages a need to have an “on-air personality,” Cambon said.

And then there are more phone calls and texts, more emails to respond to, and chat/instant messages. Add to that, because we aren’t seeing one another in the workplace, remote workers also worry that their bosses think they may not be working hard enough.

There are also non-work distractions at home for remote workers, such as dogs needing to get walked on their schedule and the question of whether the kids are actually paying attention in the virtual classes or doing their schoolwork.

“You have to be both a parent and a teacher, all while attending your own Zoom meetings,” she said. “Then your child could just show up shouting and without any clothes on,” Schweiger said. “Then, you realize that there are so many people who are working at home also going through similar things.”

Calling it a day harder at home

Knowing when to disconnect from work, Cambon said, can be challenging, even for someone like her. For example, when she goes for a run, Cambon said, “I am working thinking about problems that I need to solve.”

That’s not always the case for Kelly Christofferson, who prefers not taking her smartphone when she’s running during a break.

“I really do try to give myself a good 30 minutes to an hour trying to clear my head to reenergize,” said Christofferson, a commercial chief of staff at Data Gumbo, a Houston-based tech company. “We’ve adjusted ourselves to becoming available as most of us are always online.”

Despite the distance, Christofferson said she feels closer to her colleagues. 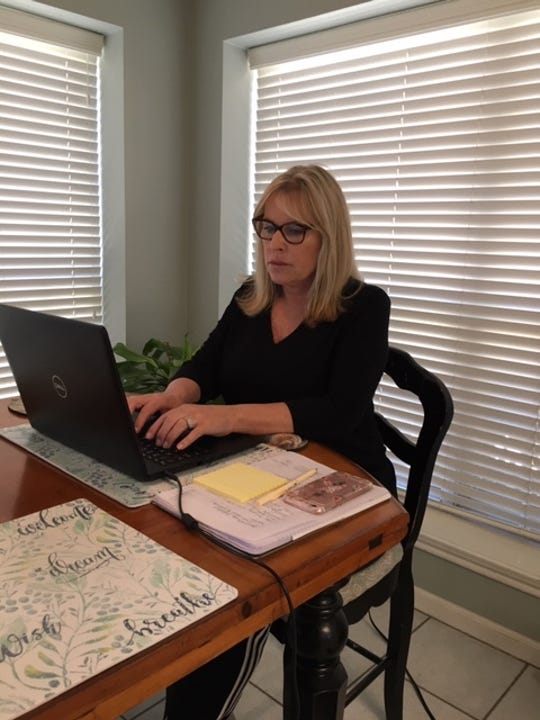 “We’re just more vulnerable,” Christofferson said. “I guess because this is more of a shared experience due to the pandemic. We’re all just trying to adapt and get through it.”

Even if it may mean virtual overload. On Wednesday, Christofferson said she had eight virtual meetings on platforms ranging from Zoom, Google Meet, Microsoft Teams, and Cisco Webex. Her first meeting began at 7 a.m., and she “consciously disconnected” around 5 p.m.

“I was mentally exhausted; the content was heavy throughout the day, I wasn’t shifting gears as much,” said Christofferson, who later went for a walk with her two dogs and had a “nice dinner” with her husband. “I had to know when to turn it off.”

Christofferson said she didn’t schedule any virtual meetings on Thursday to “catch up with other work.”

How bosses can help

Cambon said employee fatigue might get worse if employers don’t intervene: “It has to be an act of will to step away, and we may need bosses to tell their employees to tell them that it’s OK to do so.”

However, one organization said it was taking action to combat remote worker weariness and was using Cambon’s study to create a new hybrid work structure. NI, formerly known as National Instruments, an Austin-based tech and engineering company, is piloting a wellness initiative called “Thrive,” seeking to give its employees a better work-life balance.

The company said its wellness strategy revolves around five pillars: community, emotional, physical, financial, and purpose. So far, 30% of its employees have enrolled since the pilot began last month, and 65% are engaged users, exceeding their initial expectations, NI CEO Eric Starkloff said.

He added that the company gave employees two weeks off for wellness as NI is testing out coordinated vacation breaks across the company, and some departments are testing having “no meeting Fridays.”

Cate Prescott, NI’s chief people officer, said, “it’s in our DNA to try, test, fail, and repeat until we find success,” Prescott said. “So with this, we are piloting, learning, checking, and adjusting.”

Meanwhile, Schweiger’s long workdays continue, even as she ponders what a workplace would look like post-pandemic.

“I feel like I have to really readjust if I have to go back to normal work-life separation,” Schweiger said.

Cambon said it’s not going to be easy for many people to adapt to a different workflow.

“We have to try to embrace a new workday,” Cambon said.

How are you coping with the routine of your work-from-home workday? Share your thoughts with Terry Collins on Twitter: @terryscollins.

Mon Mar 22 , 2021
Mar. 21—The Palisades, a wilderness study area located in both the Bridger-Teton and Caribou-Targhee National Forests in Idaho and Wyoming, is finally having its moment in the spotlight. Wyoming Wilderness Association believes this ancestral, unceded territory of the Eastern Shoshone, Shoshone-Bannock, Northern Arapaho, Northern Cheyenne, Absaalooké (Crow) and Oceti Sakowin […]