(Bloomberg) — London Mayor Sadiq Khan said further measures may be announced in the next few days and weeks to contain infections in the capital amid reports of a surge in virus cases.

The situation continued to deteriorate in Europe with Germany’s economy minister warning of the impact of further lockdowns. Prague closed universities for in-person leaning while Thailand recorded its first coronavirus death since June.

Global Covid-19 infections passed 30 million on Friday, according to data from Johns Hopkins University, with the U.S., India and Brazil recording the largest number of cases.

The European Union signed a deal with Sanofi and GlaxoSmithKline Plc. to buy 300 million doses of any successful vaccine. Roche Holding AG said its Actemra drug reduced the need for ventilation in a third-phase clinical trial on hospitalized patients with Covid-19 and pneumonia.

The city of Prague ordered its universities to close for in-person learning after the Czech Republic reported a record jump in new coronavirus cases.

Starting next week, higher-education classes will move online in the city of 1.3 million people, Prague Mayor Zdenek Hrib said on Twitter Friday. He said he had also wanted to close high-schools, but public-health officials rejected his proposal.

The European Commission announced a contract with drugmakers Sanofi and GlaxoSmithKline on the purchase of as many as 300 million doses of any successful Covid-19 vaccine.

The commission, the European Union’s executive arm in Brussels, said in late July it had concluded exploratory talks with Sanofi/GSK for the supply of that number of doses for EU countries. The deal is the second EU advance purchase agreement following one with AstraZeneca.

London Mayor Sadiq Khan said he will be announcing restrictions over the “next few days and weeks.” While keen to avoid a version of lockdown used in other parts of the country, such steps were still a possibility, he said, according to LBC.

Earlier on Friday, the Evening Standard reported a surge of Covid-19 cases in London. The capital has recorded about 25 cases per 100,000 over the last seven days, rising from 18.8, according to the report, which didn’t say how it obtained the information.

The U.K. won’t rule out any measures in response to the pandemic, but will look to avoid another national lockdown, Health Secretary Matt Hancock said on BBC Radio.

Demand for data spiked in Ghana as more people worked from home after the government imposed virus-related movement restrictions, rising by 50%, according to the head of Vodafone’s local unit.

While Ghana’s gross domestic product shrank 3.2% in the three months through June from a year earlier, its information and technology sector expanded 74.2%.

Myanmar’s de facto leader Aung San Suu Kyi is under pressure to delay the November general elections as a resurgence in coronavirus cases has resulted in a strict lockdown across parts of the nation.

Opposition parties led by the military-backed Union Solidarity and Development Party wrote to the Union Election Commission this week to demand the Nov. 8 poll be postponed.

Several eastern European nations published record numbers of infections on Friday as the pandemic continued to spread in a region that mostly avoided mass contagion earlier this year.

Czechs added 3,123 cases, more than eight times the peak in April, while Slovenia had 137 new confirmed infections before stricter regulations on wearing masks were set to kick in.

Prime Minister Viktor Orban in Hungary, where the tally increased by 941 on Friday, said his cabinet will decide over the weekend whether to extend a moratorium on loan repayments.

Thailand reported its first death from coronavirus infection since June 2, two weeks after the nation ended a streak of 100 days without local transmission.

With the latest fatality, Thailand’s total death toll from the pandemic rose to 59. Earlier on Friday, the country reported seven imported Covid-19 cases, taking the total to 3,497.

Thailand, which was the first country outside China to detect the coronavirus, is among a handful of nations in the region which have managed to contain the pandemic.

France’s daily coronavirus cases rose by more than 10,000 to the highest since the end of lockdown in May, with Health Minister Olivier Veran warning the disease “is again very active” in the country.

The uptick in French infections mirrors steady increases across Europe, with the number of new cases in Germany rising Friday by more than 2,000, the most since late April. Portugal on Thursday reported the most new infections in five months, with 770, while Spanish cases rose at a slower pace than the previous day but still by more than 4,500.

Health officials blame the increase on social gatherings, especially among younger people, and on travelers bringing the virus back from vacation. The upward trend threatens to derail Europe’s recovery from a collapse in activity in the second quarter, should governments be forced to further tighten restrictions on movement.

The Covid-19 outbreak is driving interest from commercial banks and private entities in issuing social bonds, typically the preserve of national and supranational public sectors, ANZ said in a report.

Issuance of social bonds — whose proceeds help pay for socially beneficial projects like job creation and poverty alleviation — totaled $37.9 billion as of June 22, surpassing $18.5 billion for all of last year.

Roche Holding AG said its Actemra drug reduced the need for ventilation in a third-phase clinical trial on hospitalized patients with Covid-19 and pneumonia. The patients who got the drug were 44% less likely to progress to ventilators, compared with others who just got the standard care, Roche said Friday.

Separately, the company said a new test it developed can quantitatively measure the level of antibodies against SARS-CoV-2 in patients who have been exposed to the virus.

Pakistan reported 752 Covid-19 cases in the past 24 hours, the most in five weeks.

The country, which has the third-most cases in Asia, had seen new cases drop gradually over the past three months. Pakistan opened schools and marriage halls this month after it recently reopened most industries, including tourism.

The coronavirus pandemic has shattered labor norms in the shipping industry, with violations of worker protections becoming common as countries remain wary of relaxing port and border restrictions.

Nearly 20% of the world’s 1.6 million seafarers are stranded at sea, but industry officials say their options are limited as changing immigration rules and limited air travel make it difficult and expensive to swap out workers.

If the crisis isn’t resolved soon it threatens to ripple up the supply chain, affecting commodities companies and retailers just in time for the holiday shopping season.

Germany recorded more than 2,000 daily coronavirus cases for the first time since late April, according to data from Johns Hopkins University.

There were 2,179 new infections in the 24 hours through Friday morning, up from 1,855 a day earlier and the most since April 24. That’s still well below daily gains of almost 7,000 seen at the height of the outbreak in late March and early April.

India’s epidemic is showing no sign of peaking as the country added more than 96,000 cases overnight, bringing its tally — the highest in the world after the U.S. — to more than 5.2 million.

Amid the outbreak, economists and institutions like the Asian Development Bank have cut India’s growth projections from already historic lows. Goldman Sachs now estimates India’s economy will shrink 14.8% for the year through March 2021, while the ADB is forecasting a 9% contraction. The Organization for Economic Cooperation and Development expects India’s economy to shrink 10.2%.

“It was all about making sure the stock market didn’t come down, that his wealthy friends didn’t lose any money,” Biden said in a CNN town hall Thursday night. Trump “waved a white flag. He walked away, he didn’t do a damn thing. Think about it. Think about what he did not do. And it’s almost criminal.”

Congress had authorized additional borrowing authority for the U.S. Department of Agriculture in coronavirus-relief legislation passed earlier this year, and the second round has been widely anticipated. Trump didn’t detail the new assistance, but people familiar with the matter said the Agriculture Department would explain Friday how the aid is to be distributed.

U.S. manufacturers are sharply increasing production of cheap, fast, but less accurate COVID-19 tests, aiming for 100 million per month by year-end that will enable schools and workplaces to significantly expand testing, Reuters reported.

Manufacturing and government sources say more than a half-dozen antigen tests will likely be authorized by the end of October. That would bring overall monthly U.S. testing capacity to more than 200 million by year-end, the sources said.

The infection-fighting antibodies that people with Covid-19 naturally produce appear to decline over time, with 58% of volunteers in one trial showing no sign of them two months after testing positive.

The study published in the Journal of the American Medical Association raises questions about when people who were infected can donate blood for use in convalescent plasma therapies and whether they have lasting protection against repeat infection. The report tracked almost 250 volunteers from Vanderbilt University Medical Center in Nashville, Tennessee.

Antibodies were identified in 19 participants after the first test in April, but only eight had them two months later. Volunteers who suffered Covid-19 symptoms were more likely to continue producing antibodies.

China will halt imports of aquatic products from PT Putri Indah for a week after finding coronavirus particles on the packaging of frozen hairtail, customs said in a statement.

Singapore company Veredus Laboratories has developed a Covid-19 test kit that saves about 40 minutes, cutting the the total processing time to 90 minutes, the Straits Times reported.

The kit makes it possible to detect the virus directly from the sample, without needing to extract its viral ribonucleic acid. The company has obtained provisional authorization from the Health Sciences Authority to supply hospitals and medical clinics, the report said.

Fri Sep 18 , 2020
It’s quiet out there, and we’re wrapping up early. Thanks for following along today – we’ll be back on Monday. London-listed lenders have hit their lowest level in almost three decades, according to a gauge of bank stock values. The FTSE 350 Banks index, a capitalisation-weighted gauge of lenders’ stock […] 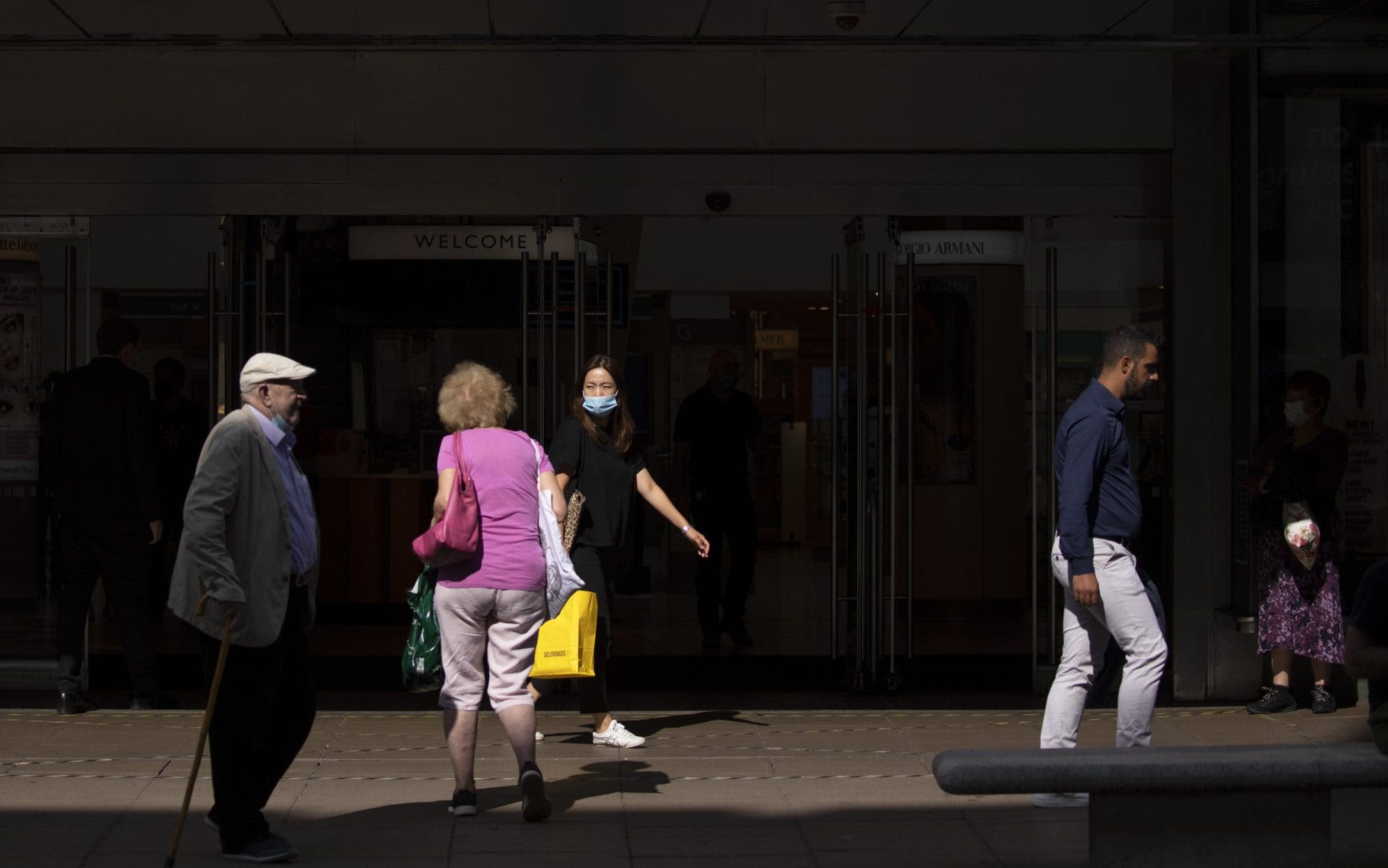