(Bloomberg) — London Mayor Sadiq Khan said further measures may be announced in the next few days and weeks to contain infections in the capital amid reports of a surge in virus cases.

Estimates for England from the Official for National Statistics (ONS) published on Friday suggest there were 6,000 new infections per day in the community in the week ending Sept. 10 — up from 3,200 the week before.

The situation continued to deteriorate in Europe with Germany’s economy minister warning of the impact of further lockdowns. Prague closed universities for in-person leaning while Denmark also expanded restrictions on public gatherings. Thailand recorded its first coronavirus death since June.

In New York, Mayor Bill de Blasio said he was confident students could go back to schools at the end of the month after delaying their return on Thursday. Global Covid-19 infections passed 30 million on Friday, according to data from Johns Hopkins University, with the U.S., India and Brazil recording the largest number of cases.

The European Union signed a deal with Sanofi and GlaxoSmithKline Plc. to buy 300 million doses of any successful vaccine. Roche Holding AG said its Actemra drug reduced the need for ventilation in a third-phase clinical trial on hospitalized patients with Covid-19 and pneumonia.

France’s soccer and rugby clubs have become hot spots for spread of the coronavirus after training and competition resumed following a summer break.

Since the end of July, health authorities have reported 88 Covid-19 clusters linked to sports clubs, most of them in the first two weeks of September, France’s public health agency said late Thursday.

U.K. Spread Accelerating With Lockdown Not Ruled Out (9:07 a.m. NY)

Boris Johnson’s government extended coronavirus restrictions across northern England and the Midlands, as ministers refused to rule out a short national lockdown to tackle a surge in infections.

Residents in parts of northwest England, the Midlands and West Yorkshire face a raft of new measures including a ban on socializing with other people outside their own households, the Department of Health said on Friday.

For the U.K., the so-called R rate, or how many people each new Covid-19 case infects, is as high as 1.4, the government said, indicating the spread is accelerating.

“Remote education is easier, it’s less helpful for our kids and our families, it sets them back and we’re not going to let that happen,” de Blasio said Friday in an interview on MSNBC’s “Morning Joe” program.

On Thursday, four days before all New York City schools were to reopen for in-person instruction, the mayor delayed classes for elementary schoolers until Sept. 29 and for middle- and high-school students until Oct. 1. The move, which followed an earlier delay that pushed the reopening to Sept. 21 from Sept. 10, frustrated parents and raised questions over whether the city would follow districts like Chicago and Los Angeles to start the year online.

Denmark is introducing a nationwide limit of 50 people on public gatherings and early closing times for bars and restaurants amid a record rise in Covid-19 cases.

From Saturday and until Oct. 4, businesses will be encouraged to let their employees work from home wherever possible. Citizens will be asked to limit their social circles, wear face masks in bars and restaurants and avoid public transport during rush hour, Prime Minister Mette Frederiksen said at a press conference in Copenhagen.

The city of Prague ordered its universities to close for in-person learning after the Czech Republic reported a record jump in new coronavirus cases.

Starting next week, higher-education classes will move online in the city of 1.3 million people, Prague Mayor Zdenek Hrib said on Twitter Friday. He said he had also wanted to close high-schools, but public-health officials rejected his proposal.

The European Commission announced a contract with drugmakers Sanofi and GlaxoSmithKline on the purchase of as many as 300 million doses of any successful Covid-19 vaccine.

The commission, the European Union’s executive arm in Brussels, said in late July it had concluded exploratory talks with Sanofi/GSK for the supply of that number of doses for EU countries. The deal is the second EU advance purchase agreement following one with AstraZeneca.

London Mayor Sadiq Khan said he will be announcing restrictions over the “next few days and weeks.” While keen to avoid a version of lockdown used in other parts of the country, such steps were still a possibility, he said, according to LBC.

Earlier on Friday, the Evening Standard reported a surge of Covid-19 cases in London. The capital has recorded about 25 cases per 100,000 over the last seven days, rising from 18.8, according to the report, which didn’t say how it obtained the information.

Demand for data spiked in Ghana as more people worked from home after the government imposed virus-related movement restrictions, rising by 50%, according to the head of Vodafone’s local unit.

While Ghana’s gross domestic product shrank 3.2% in the three months through June from a year earlier, its information and technology sector expanded 74.2%.

Myanmar’s de facto leader Aung San Suu Kyi is under pressure to delay the November general elections as a resurgence in coronavirus cases has resulted in a strict lockdown across parts of the nation.

Opposition parties led by the military-backed Union Solidarity and Development Party wrote to the Union Election Commission this week to demand the Nov. 8 poll be postponed.

Several eastern European nations published record numbers of infections on Friday as the pandemic continued to spread in a region that mostly avoided mass contagion earlier this year.

Czechs added 3,123 cases, more than eight times the peak in April, while Slovenia had 137 new confirmed infections before stricter regulations on wearing masks were set to kick in.

Prime Minister Viktor Orban in Hungary, where the tally increased by 941 on Friday, said his cabinet will decide over the weekend whether to extend a moratorium on loan repayments.

Thailand reported its first death from coronavirus infection since June 2, two weeks after the nation ended a streak of 100 days without local transmission.

With the latest fatality, Thailand’s total death toll from the pandemic rose to 59. Earlier on Friday, the country reported seven imported Covid-19 cases, taking the total to 3,497.

Thailand, which was the first country outside China to detect the coronavirus, is among a handful of nations in the region which have managed to contain the pandemic.

France’s daily coronavirus cases rose by more than 10,000 to the highest since the end of lockdown in May, with Health Minister Olivier Veran warning the disease “is again very active” in the country.

The uptick in French infections mirrors steady increases across Europe, with the number of new cases in Germany rising Friday by more than 2,000, the most since late April. Portugal on Thursday reported the most new infections in five months, with 770, while Spanish cases rose at a slower pace than the previous day but still by more than 4,500.

Health officials blame the increase on social gatherings, especially among younger people, and on travelers bringing the virus back from vacation. The upward trend threatens to derail Europe’s recovery from a collapse in activity in the second quarter, should governments be forced to further tighten restrictions on movement.

Roche Holding AG said its Actemra drug reduced the need for ventilation in a third-phase clinical trial on hospitalized patients with Covid-19 and pneumonia. The patients who got the drug were 44% less likely to progress to ventilators, compared with others who just got the standard care, Roche said Friday.

Separately, the company said a new test it developed can quantitatively measure the level of antibodies against SARS-CoV-2 in patients who have been exposed to the virus.

Pakistan reported 752 Covid-19 cases in the past 24 hours, the most in five weeks.

The country, which has the third-most cases in Asia, had seen new cases drop gradually over the past three months. Pakistan opened schools and marriage halls this month after it recently reopened most industries, including tourism.

The coronavirus pandemic has shattered labor norms in the shipping industry, with violations of worker protections becoming common as countries remain wary of relaxing port and border restrictions.

Nearly 20% of the world’s 1.6 million seafarers are stranded at sea, but industry officials say their options are limited as changing immigration rules and limited air travel make it difficult and expensive to swap out workers.

If the crisis isn’t resolved soon it threatens to ripple up the supply chain, affecting commodities companies and retailers just in time for the holiday shopping season.

Germany recorded more than 2,000 daily coronavirus cases for the first time since late April, according to data from Johns Hopkins University.

There were 2,179 new infections in the 24 hours through Friday morning, up from 1,855 a day earlier and the most since April 24. That’s still well below daily gains of almost 7,000 seen at the height of the outbreak in late March and early April.

India’s epidemic is showing no sign of peaking as the country added more than 96,000 cases overnight, bringing its tally — the highest in the world after the U.S. — to more than 5.2 million.

Amid the outbreak, economists and institutions like the Asian Development Bank have cut India’s growth projections from already historic lows. Goldman Sachs now estimates India’s economy will shrink 14.8% for the year through March 2021, while the ADB is forecasting a 9% contraction. The Organization for Economic Cooperation and Development expects India’s economy to shrink 10.2%.

Congress had authorized additional borrowing authority for the U.S. Department of Agriculture in coronavirus-relief legislation passed earlier this year, and the second round has been widely anticipated. Trump didn’t detail the new assistance, but people familiar with the matter said the Agriculture Department would explain Friday how the aid is to be distributed.

The infection-fighting antibodies that people with Covid-19 naturally produce appear to decline over time, with 58% of volunteers in one trial showing no sign of them two months after testing positive.

The study published in the Journal of the American Medical Association raises questions about when people who were infected can donate blood for use in convalescent plasma therapies and whether they have lasting protection against repeat infection.

Fri Sep 18 , 2020
No one who has ever seen David Fincher’s 1995 thriller Seven — or Se7en, for those who are pernickety when it comes to movie title style — will have been able to forget it. The bleak, miserable tale of two detectives tracking a killer who is inspired by the Seven […] 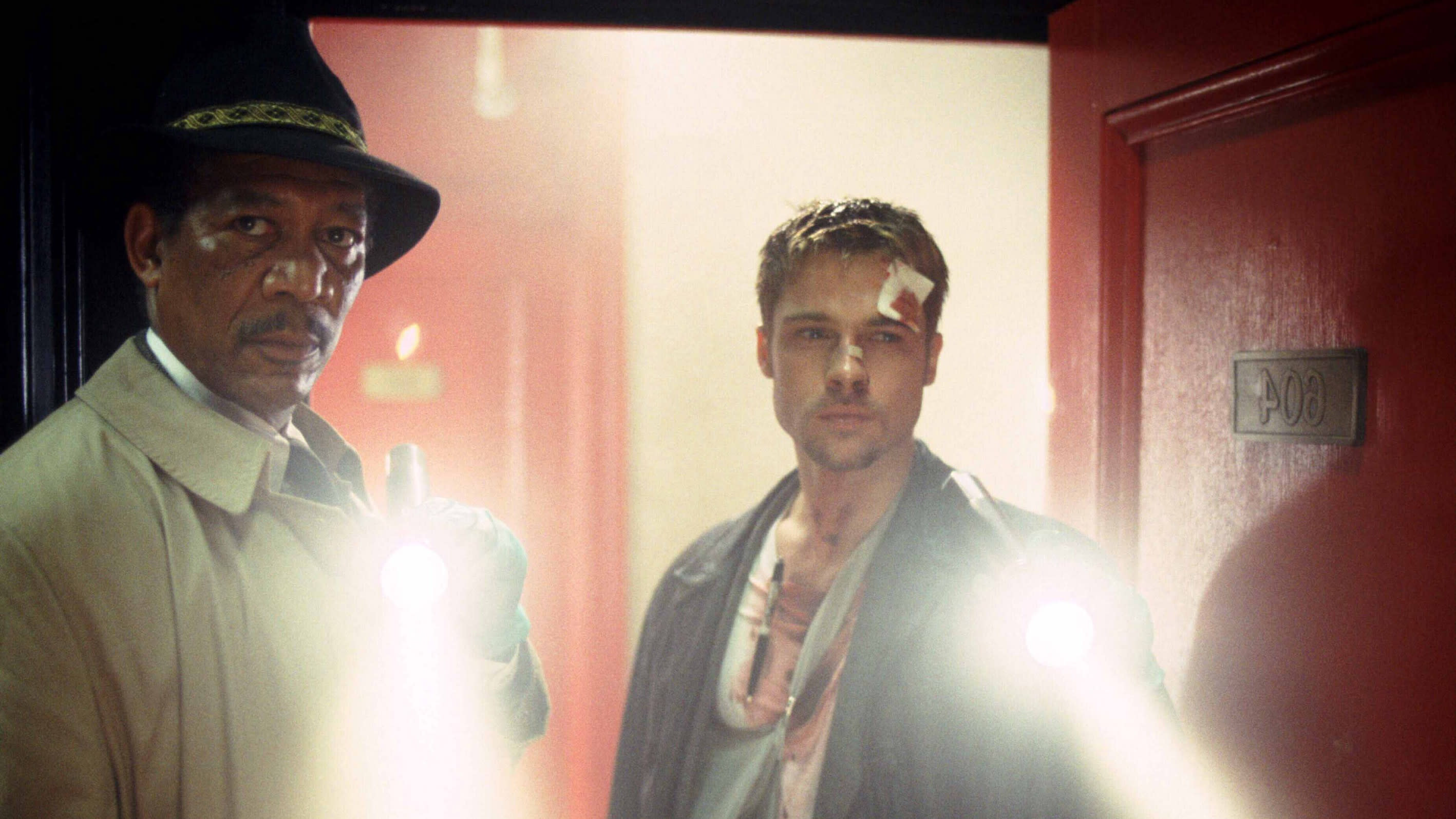