Everyone knows that Lancaster is rich with history, but now you can get a little richer by knowing some Lancaster history. Adam Zurn, creator of Uncharted Lancaster — the local history-based adventure website — and Historic Preservation Trust of Lancaster County have teamed up to create an epic six-week-long Secret Trust Adventure with a grand prize valued at more than $3,000.

The adventure begins March 20. A new clue will be released each Saturday at 7 a.m. on the social media accounts and websites of Uncharted Lancaster and the Preservation Trust. The clue — sometimes cryptic, sometimes obvious — will take players to a location where they’ll have to decipher a riddle or solve another clue.

To discover the treasure, players will first need to be a member of the Preservation Trust — the local organization that seeks to facilitate education, appreciation and protection of the county’s many historical sites. Membership begins at $25. Existing members and new members that sign up at any level will gain access to instructions as well as a special decoder paper that is necessary for unlocking the correct sequence of GPS coordinates that will ultimately put players in close proximity to the treasure.

If you’re interested in playing, keep reading: several hints are included in this story.

Uncharted Lancaster offers more than a dozen adventures and side quests where people can solve riddles about local history and discover some of the county’s hidden gems — both metaphorically and literally — in the form of 3D-printed treasure. But Zurn had long been thinking about how to construct a real treasure hunt — with actual treasure.

Zurn recently joined the board of the Trust, which allowed him to take his treasure hunt to the next level.

“Even from the very beginning, I’ve been kicking around the idea,” Zurn says. “It’s fun to give out 3D-printed trinkets and plastic gold coins, but trick is where do you come up with the funds for something like that without losing your shirt?”

At the same time as Zurn was trying to figure out how to stage a real treasure hunt, the Trust was gearing up for a new member drive. Zurn thought that historically or architecturally significant local businesses would potentially be interested in some increased foot traffic and pay to be a part of the game thereby covering the cost of the prize money.

“So for some of these places, it gives a different demographic of who’s already going there and checking the place out,” Zurn says.

Hint: The first location, Zurn says, will be the Columbia Crossing River Trail Center. “So people are going to go and check out the exhibit, and that week’s chunk of the GPS coordinates is going to be sort of hidden in the display there.”

After the first week, locations will be revealed in the clues and riddles.

The art of a secret adventure

Zurn was inspired to create the Secret Trust Adventure by other real-life treasure hunts such as Byron Preiss’ 1982 puzzle book “The Secret,” which featured poems and paintings that led to 12 treasures buried in locations in the United States and Canada. (As of October 2019, only three of the treasures have been found.)

Zurn employed a similar approach. He penned his own poem with five 10-line stanzas and each stanza acts as a riddle or clue. Zurn also enlisted fellow Lampeter-Strasburg teacher and local artist Scott Cantrell to paint an image with hidden clues. The poem, the paintings and the GPS coordinates gleaned from each week’s riddles will help players zero in on the treasure.

Hint: According to the Uncharted Lancaster website, the final challenge will require proper footwear.

“When he told me of his own plans and asked if I would be interested in doing a painting, I couldn’t say no,” says Cantrell in an email. “Like Adam, I grew up watching ‘The Goonies’ and ‘Indiana Jones,’ these epic narratives around the search for earthly treasures. So, the chance to bring my passion for painting to a living narrative was a chance to combine nostalgic ideas with the present.”

“There is not a single piece of the painting that doesn’t relate to the location of the treasure; each detail is specific and is up to the viewer to decode,” Cantrell says. “The one clue I will give away, is that overall composition of the painting follows the geographic shape of Lancaster County. Since this hunt is sponsored by Uncharted Lancaster and the Preservation Trust, it’s not surprising to have this as a main theme.”

A ‘game of skill’

Due to legal reasons, the treasure hunt is called a “game of skill” and the actual hidden treasure chest doesn’t have the cash inside but can be redeemed for an 18-pound box full of $1,000 worth of $1 coins. The winner also receives the clue painting, valued at more than $2,000.

“The coin shortage is real here in Lancaster County, and it’s possibly my fault,” Zurn says. “I cleaned out four PNC banks to get $1,000 worth of gold coins.”

Though the treasure hunt lasts for six-weeks, Zurn recommends not waiting until the last week to start playing, but rather playing week by week to make the challenge more manageable.

“This gives you and your family all week — whenever you have a chance to go to that place and check it out at your leisure,” Zurn says. “You definitely want to have all the stops visited before the last week when the final clue is revealed because I imagine that’s it’s going to be a kind of a mad rush to get the last clue solved and then get to that place.”

Hint: Zurn says he thinks the winner will have a skill set that includes knowledge of local history, code-breaking and puzzle solving skills. And, he says, he thinks people with geocaching experience may have a leg up.

“The challenge is making it doable but hard enough that it will eliminate people as they go along,” Zurn says. “Usually I want everyone to be able to do it, but I wanted to make this one harder. I think it’s going to be a lot of fun.”

Find more information about the Secret Treasure Adventure at unchartedlancaster.com.

Sign up to be a member of the Historic Preservation Trust of Lancaster County athptrust.org/join.

For Russians in a Pandemic, Lake Baikal Is the Place to See and Be Seen

Mon Mar 15 , 2021
Usually it’s foreigners who cavort at the world’s deepest lake in winter. But with many borders closed, Russians are arriving in droves to make TikTok videos and snap Instagram pictures. ON LAKE BAIKAL, Russia — She drove 2,000 miles for this moment: Hanging out the sunroof of her white Lexus […] 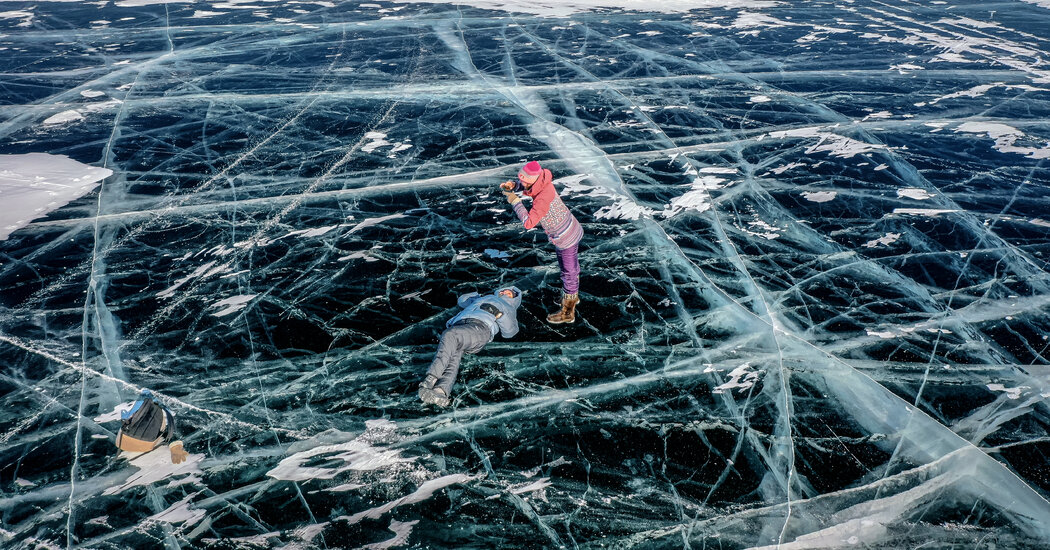