Your home is your safe haven.

Some people don’t want to leave the house out of fear the burglar might come back, he said. Others can’t sleep at night.

“It comes with all sorts of strings attached once they’ve been a victim,” he said.

Reports of burglaries and breaking and entering stayed about the same in Akron from 2019 to 2020, though some neighborhoods — including downtown, North Hill, Goodyear Heights and University Park — experienced increases.

When burglars do strike, the important thing is knowing what they took.

Hamilton said people can help detectives solve burglaries — and get their property back — by knowing what they have and keeping a record of it.

“We’ll often make an arrest and we’ll hit what we refer to as a ‘honey hole,’ ” Hamilton said. “There’ll be a treasure trove, it’s abundantly clear the stuff stolen. Problem is, I don’t know who it belongs to.”

One solution is ReportIt, an online system that keeps a record of your property and helps prove it’s yours if it’s stolen.

Stolen items like flat-screen TVs, gaming systems or power tools aren’t unique to you. But the serial numbers on your item are unique, Hamilton said.

Hamilton said the service is free, and only costs a little bit of time. Residents can find the service at reportit.leadsonline.com.

Oftentimes, a police report might say “miscellaneous tools” Hamilton said. But if it says “DeWalt Impact Driver” and has a serial number, it’s much easier to potentially find.

“Knowing what you have is the difference between possibly recovering property and never seeing it again,” he said.

He said hot items to steal are generally things people can flip quickly. Things like flat-screen TVs, gaming systems, sound bars, power tools, guns and computers are commonly stolen, and all have serial numbers on them.

If an item doesn’t have a serial number, like jewelry or something handmade, the website does let you upload photos. Hamilton said it also helps to put distinguishing marks on items, like your birthday and initials.

It took a Beacon Journal reporter about 90 minutes to log all of the items over $100 in his home.

The Beacon Journal analyzed Akron police data for burglaries and breaking and entering.

On average, there’s about 141 burglaries a month in Akron. West Akron, North Hill, South Akron, Kenmore, Goodyear Heights, Ellet and East Akron all average 10 or more each month. East Akron leads the city with an average of 16 each month.

Across Akron, these incidents were down 1% last year, but neighborhoods saw different results.

Other neighborhoods saw minimal change, or had large percent increases but with relatively few burglaries each year. Merriman Valley, for example, had a 41% increase, but only rose from 17 to 24 burglaries.

It’s unclear how the pandemic affected these trends.

Burglary and breaking and entering were on the rise each month until June, and up almost 1% the first half of the year.

To prevent a burglary, “think like a crook” to see where your home is vulnerable, Hamilton suggested.

“The more measures you take to set yourself apart and to prevent yourself from being a victim, the better of you are,” Hamilton said.

Here are some measures you can take:

1. Keep valuable items out of sight.

Hamilton said most vehicle thefts are kids wandering the street, peering into windows and checking for unlocked doors.

They often hit pay dirt, he said. Hamilton has taken reports of firearms, medications, expensive electronics and thousands of dollars of cash taken from vehicles.

Don’t leave anything valuable in your vehicle, Hamilton said. And avoid leaving anything in plain view, because thieves will take a chance even for seemingly valueless items.

“If you have a gym bag sitting on the backseat that’s full of dirty clothes, they’ll bust your window out to see what’s in it,” Hamilton said.

The same thing goes for items inside the home. If you have a large TV on in front of a window at night, burglars walking by will make a mental note, Hamilton said.

2. Consider a home alarm system as they get cheaper, better and easier to use.

Home-alarm systems used to cost much more. Hamilton said people often had to sign a contract and paid anywhere from $60 to $80 a month.

“That’s not cost effective for a lot of people in Akron,” Hamilton said.

Home-alarm systems have become much better and much cheaper. Many are DIY-oriented and work on a smartphone.

Hamilton usually recommends Ring and SimpliSafe but is also a fan of Arlo security and the company’s floodlight cameras.

Hamilton said you can use these systems without a subscription and get alerts sent to your phone. Paying for monitoring costs about $10 a month.

Hamilton personally uses Ring. A starter set is about $200, and it’s fully expandable. You can add or remove sensors and cameras, and you can take it when you move. Ring also has non-burglary related items, like water sensors to see when a pipe bursts.

He suggested installing whatever your budget allows.

3. Realize thieves try to use cover.

Burglars aren’t likely to use your front door. Hamilton said they’ll use doors and windows in the back or on the side of your home so they can’t be seen from the street.

He said those entry points are also good places to put sensors and cameras.

It’s good to keep your bushes and landscaping trimmed, because thieves use those as cover while they’re working to get into a window.

Garages are often targets. Hamilton said people will leave their garage doors unlocked and leave their doors wide open, letting anyone see what they have inside.

“Because when these guys are doing it, they’re nervous,” Hamilton said. “They’re there, their heads on a swivel, they’re looking over their shoulder. And if they’re getting lit up and they go into a garage and an alarm goes off, that’ll certainly send them down the road, or make them work very quickly.”

Hamilton said it’s common for people to go knocking door-to-door. If they pound and pound and no one answers, it’s a home they can get into it. If someone answers, they ask if “Tony” is home and head off.

“If that happens, you need to be calling the police,” Hamilton said. “That’s somebody we need to know who they are.”

Hamilton said there’s a reluctance to call the police, but people should trust their “sixth sense” and if something doesn’t look right, they should let police know.

The same goes for a neighbor’s home. He said it’s good to know your neighbors and to have their phone numbers. The nice older lady who lives down the street is a great asset, he said.

Greg Burke, who captains the Highland Park block watch in Kenmore, said the main reason they have the block watch is to keep an eye on each other. He said he regularly works with a Neighbor Response Team officer, and lets them know if something is off.

“When we band together, we can be very powerful,” Burke said.

5. Don’t rule out people you know.

Unfortunately, many people are burglarized by people they know. Hamilton said it’s common because they know what you have, and how to get in.

A common thing that happens, he said, is that someone visiting unlocks a window and comes back later.

He said it’s especially common with firearms. People like to show them off, he said, and someone who sees them comes back later to take them.

Last January, Hamilton worked a case where a 90-year-old was being scammed by his step-grandson. A Ring doorbell camera gave authorities the evidence to charge the man.

If you’re going on vacation, it’s also not a great idea to tell the world about it on Facebook, Hamilton said.

Any door can be defeated. Hamilton knows from experience, because police sometimes need to break them down to help people inside.

Some were hard to break; some a 10-year-old could have kicked in, he said.

Hamilton said a steel door with a good lock can help but is not always cost effective. A common and cheap solution is to use 2-inch screws when installing a deadbolt’s bore hole, so that it’s secured into your stud and not just the door jamb.

Another cheap solution is using a piece of wood or a bar to wedge close windows or sliding doors.

If your door is kicked in or has been broken, Hamilton said it’s important to replace or fix it.

If you have a vacant home, Hamilton said it’s “playing with fire.” He said burglars look for things like mail piling up, rent or for sale signs and no lights or cars in the driveway. And if they see those things, they’re going in.

He said vacant home owners should install internet and a wireless router in a vacant home so they can set up an alarm system. Hamilton said it’s not as cost effective, but it makes it much less likely that your furnace or hot water tank will get stolen.

8. Take whatever steps you can afford.

Hamilton said he understands that these things are easier said than done, and that to some people a $200 alarm system might as well be $2,000. He also said many renters may not have a choice when it comes to upgrading their home and implementing some of these measures.

Nothing is 100%, he said. But the more steps you take to protect yourself, even free or cheap ones, the better.

Farmers, Foragers and Homesteaders are the New Fashion Influencers

Thu Jan 28 , 2021
Romanticizing life connected to the land has complicated implications, but it’s starting to shape what we see as aspirational. In the early twenty-teens, Jenny Ong fell into the fashion influencer dream. She started outfit-blogging under the moniker Neon Blush as a hobby while preparing for grad school. The photos she […] 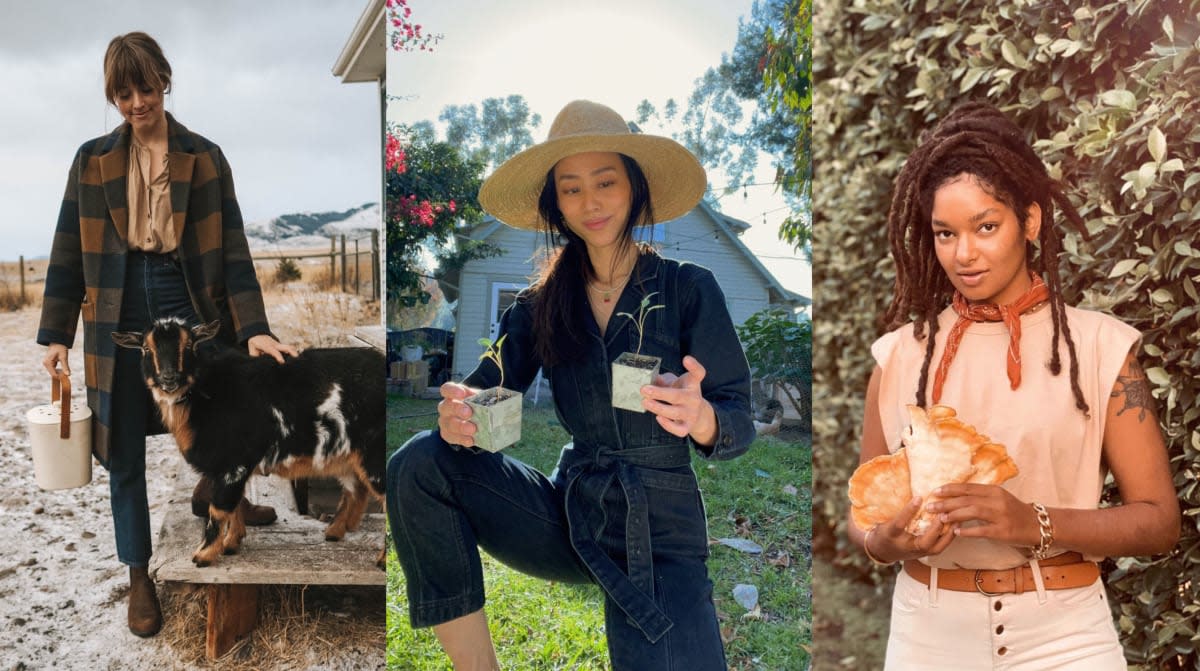