Days after the federal government warned against Thanksgiving travel, college students will be fanning out across the U.S. Every itinerary raises risks somewhere.

With COVID rates at their highest ever, most schools are telling students to return home — and stay. But they aren’t requiring testing or quarantining to prevent them from bringing the virus home to mom and dad. A handful are even allowing them to return to campus after the break.

The movement of students, already thought to have contributed to the summer surge, could make for an even more fearful spread as families gather at the holiday table. Since many colleges returned to campus in late August, average new confirmed cases each day in the U.S. have nearly quadrupled.

The U.S. Centers for Disease Control and Prevention on Thursday recommended against traveling and celebrating the holiday with non-household members — a category that would extend to students who haven’t been living with their parents for two weeks.

All scenarios carry risk, said Anita Barkin, co-chair of the American College Health Association’s covid-19 task force, which has issued its own considerations for colleges.

“Students could either take it home or take it back to campus, and we would have more outbreaks, especially now with COVID soaring across the country,” Barkin said.

The College Crisis Initiative at Davidson College in North Carolina examined Thanksgiving plans for a sample of 100 schools across 50 states: the Power 5 sports conferences, flagship schools and universities with large on-campus enrollments. Almost 80% are stopping in-class instruction by Thanksgiving.

Yet most students will need to travel, as they attend colleges an average of 130 miles from home, according to U.S. Education Department data. The distance is higher, 313 miles, at private four-year colleges. A coalition of seven governors in the Northeast this week encouraged colleges to provide testing for all students traveling home for Thanksgiving break to “the maximum extent possible.”

Nicole Klein initially felt fine with her 18-year-old daughter, Jennah, flying home to Colorado from the University of Missouri without a test or quarantine. Her feelings changed when contact tracers notified Jennah last weekend that she had been exposed to the virus. She isolated, tested negative, and is planning to return to her parents’ house near Denver on Saturday.

“It became a lot more real,” said Klein, who is also having her son tested before he flies home from California Polytechnic State University.

Washington University in St. Louis is continuing classes through mid-December, after a four-day break for the holiday. About 84% of undergrads at the private school come from out of state.

The school initially encouraged students to stay for a Thanksgiving dinner served by university dining, and recommended that those who travel home stay there. Late last week, the school changed its policy, citing “the increasingly troubling conditions in the St. Louis region.”

Undergrads who travel more than 60 miles outside the area won’t be allowed back. The school is cutting off access to campus buildings for those who travel or don’t fill out a form called the “Thanksgiving Break Travel Commitment.”

Amanda Zinman, a University of Vermont sophomore, will make the 5½-hour drive from Burlington, Vt., to her parents’ home in New Jersey. Because she’s never driven that long by herself, her mother found another student who needed a ride to accompany her.

“It’s adding a whole layer of chaos,” said Jennifer Zinman, who teaches high school biology and has a doctorate in biomedical science. Still, the family feels comfortable because Amanda, 19, has been tested weekly.

The most careful approach is a 14-day quarantine upon arrival, according to the American College Health Association.

New York’s 64-institution state university system is testing about 140,000 students before sending them home to finish the semester virtually. They must test negative 10 days before leaving campus and if found positive, they will be quarantined or isolated.

At the University of Wyoming, where classes were scheduled to move online next week, rising cases prompted an early shift to virtual learning. Students — about 35% are from out of state — have been encouraged to leave for the break after they get negative test results and to quarantine for two weeks upon arriving home.

The University of Arkansas is holding in-person classes following the holiday, after hearing from students and their parents that they wanted the option to return, said spokesman Mark Rushing.

“We’re not urging them to come back,” Rushing said.

The school is offering cash incentives for testing, initially $20 gift cards for the first 300 students and a drawing for one $100 gift card. Football coach Sam Pittman recorded a message urging students to get tested before leaving. “Mask up, get tested now and protect your family and friends,” Pittman said in the video, clad in a school sweatshirt and in front of an illuminated Razorback mascot. “Let’s make sure we keep Grandma safe at Thanksgiving.”

The University of Florida, where 22% of students come from outside the state, left to faculty the decision about in-person classes after the holiday.

Scott Becker, executive director of the Association of Public Health Laboratories, said his two daughters will fly home to Maryland from Syracuse and San Diego State universities. They’ll quarantine for three to four days on both ends, and take tests at school and at home.

The family will be sharing their Thanksgiving meal over Zoom, as Becker’s father-in-law is elderly and at risk.

“My wife and I, we essentially haven’t really left the house,” he said. “So bringing them in, we want to make sure we do everything we can to keep ourselves safe.”

Sat Nov 21 , 2020
Kyler’s work fixing pipelines takes him all over the country. RV living allows the family to go with him. Courtesy of Katherine Umbarger Katherine and Kyler have lived in an RV camper with their five children since May 2019. Katherine told Insider this has helped the family spend more time […] 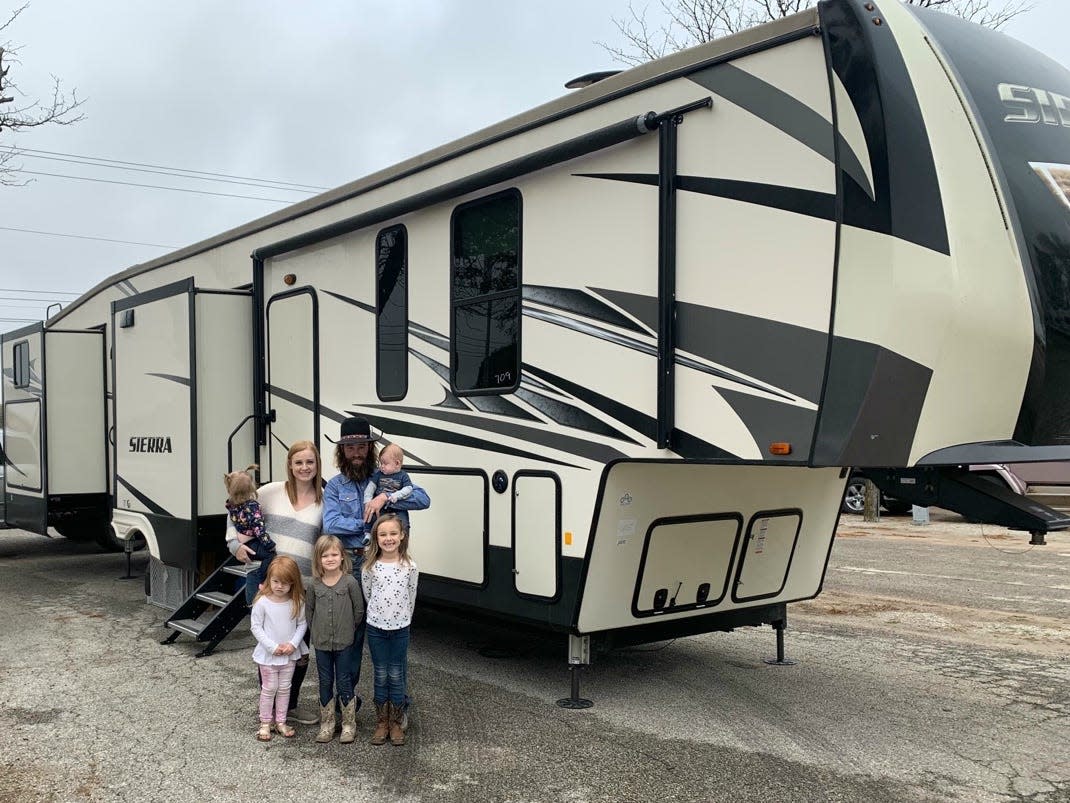