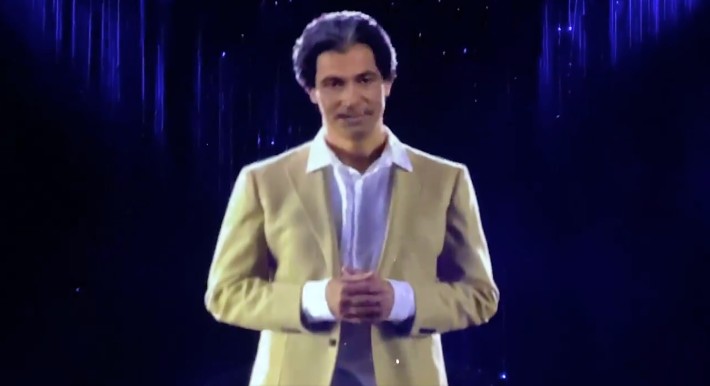 Kim Kardashian’s island getaway in the middle of a pandemic made her an easy target for people on social media pointing out how tone deaf a display of extreme wealth is at a time of economic strife for many. But despite her own defense of the post, Kardashian apparently couldn’t help but double down with the help of a hologram on Thursday.

The celebrity shared a video of an apparent birthday gift from husband Kanye West, which was a hologram of her deceased father, Robert Kardashian. The video was a more than two-minute “message” from a glowing image of the former OJ Simpson lawyer wishing his daughter a happy birthday.

For my birthday, Kanye got me the most thoughtful gift of a lifetime. A special surprise from heaven. A hologram of my dad. ✨🤍 It is so lifelike! We watched it over and over, filled with emotion. pic.twitter.com/jD6pHo17KC

Kardashian’s tweet made it clear the gift meant a lot to her, but sharing it with the rest of the world certainly opened it up for interpretation from many bewildered people on social media. For one, it’s not cheap to, uh, make a hologram of someone who has died. And the grainy video made a glowing, ghost-like Robert Kardashian appear disturbing to some.

“I watch over you and your sisters and your brother and the kids every day,” was a kind sentiment, for example, which kind of came off as terrifying coming from a Kardashian right out of the uncanny valley. Take away the fact that getting a hologram for your birthday is an absurd display of wealth, the image of that hologram was upsetting to a lot of people.

Kim Kardashian getting a hologram of her dead dad while millions of Americans didn’t even get to tell their parents goodbye or go to their funerals thanks to COVID is too on the nose.

Which is why there were, one again, a lot of opportunities to make jokes because of something Kardashian tweeted.

just putting this out there now: do not get me a hologram of my deceased relatives. keep my peoples where they belong—in heaven silently watching me jack off too much

If you don’t want to watch all of the video, you’ll miss Kardashian dancing to Barry Mann’s “Who Put The Bomp.” No, really. And it definitely wasn’t a recording of Kardashian brought to life by hologram technology, but something new put together somehow and written well after his 2003 death. And considering it was a gift from West, it’s fitting that the hologram called Kanye a “genius” and used the word “most” several times in a row at different points in the video.

It’s unclear exactly what the tech involved in this was, but the hologram told Kardashian to “remember to say your prayers” before flickering away and disintegrating into a shower of golden sparks. Kardashian tweeted that she “watched it over and over, filled with emotion.” For the rest of us, however, you only need to watch it once for it to remain with you forever.