The role of First Lady is loosely defined, extremely scrutinized, and severely underpaid—we’re talking a salary of $0 for four to eight years of nonstop public engagements, advocacy work, and event planning and hosting duties. Despite all this, presidential spouses throughout history have made their role incredibly impactful. To name a few: Hillary Clinton was appointed by her husband to head the White House Task Force on National Health Care Reform; Laura Bush testified in Congress to support her childhood literacy initiatives and spoke out against the oppression of women in Afghanistan; and Michelle Obama established initiatives to end childhood obesity, improve educational opportunities for women, and support military families.

If Joe Biden is declared the winner of the 2020 presidential election, Dr. Jill Biden will undoubtedly go even further in revolutionizing the job of First Lady, most prominently by continuing to work outside the White House as a full-time educator. Here’s everything you need to know about her, from how she met the likely next president of the United States to what the East Wing could look like under a First Lady Jill Biden.

Who is Jill Biden?

First things first: Biden was born Jill Tracy Jacobs in New Jersey in 1951 and spent most of her childhood in the suburbs of Philadelphia. The oldest of five girls, she developed a reputation as a bit of a prankster, and has also spoken often about her longtime passion for running.

Though she initially enrolled at Brandywine Junior College to study fashion merchandising, she transferred after one semester to the University of Delaware to major in English. She has since spent decades as an English and reading teacher in public high schools and community colleges, as well as a stint teaching history to teenagers at a psychiatric hospital. Along the way, she’s earned two master’s degrees in reading and English, and, in 2007, a doctorate in educational leadership.

While studying for her bachelor’s degree, Biden married Bill Stevenson in 1970, but they separated in 1974; a year later, she met then-newly minted U.S. Senator Joe Biden.

How did Jill and Joe Biden meet?

The Bidens were set up in 1975 by Joe’s younger brother Frank. As Jill told Vogue in 2008, “He came to the door and he had on a sport coat and loafers, and I thought, ‘God, this is never going to work, not in a million years.’ He was nine years older than I am! But we went out to see A Man and a Woman at a movie theater in Philadelphia, and we really hit it off. When we came home, we were standing at the door. During the ’70s, usually the guy was groping you at the door—I don’t think that’s changed, really—but he shook my hand good night. And I went upstairs and called my mother at 1:00 a.m. and said, ‘Mom, I finally met a gentleman.'”

They were married a few years later, on June 17, 1977, in New York City—though it took five proposals before Jill agreed to marry Joe, because she wanted to make sure she was making the right decision not only for herself, but also for Joe’s young sons Hunter and Beau, who had lost their mother and sister in a tragic car accident in 1972. “I couldn’t have them lose another mother. So I had to be 100 percent sure. It was a big step,” she told Vogue.

After they tied the knot, Biden took some time off teaching to focus on raising her new stepsons and daughter Ashley, who she and Joe welcomed in June 1981. It wasn’t long, however, before she jumped right back into teaching and went back to school herself to start racking up her many advanced degrees.

What did Jill Biden do while serving as Second Lady?

Throughout her husband’s nearly half-century-long political career, Biden has been fully supportive, all while cultivating her own independent career as an educator. So, while married to the vice president from 2008 to 2016, this meant Biden carried out many of the typical Second Lady duties—supporting the First Lady’s initiatives and helping to campaign for Democratic candidates during midterm elections—but also maintained a full schedule as an English professor at Northern Virginia Community College. In doing so, she made history as the first Second Lady to hold a paying job while in office.

Then-FLOTUS Michelle Obama was particularly impressed with Biden’s ability to juggle her two jobs. “Jill is always grading papers,” she said in 2016. “Which is funny because I’d forget, ‘Oh yeah, you have a day job!’ And then she pulls out her papers, and she’s so diligent, and I’m like, ‘Look at you! You have a job! Tell me! Tell me what it’s like!'”

Outside of teaching, she led a White House effort to advocate for community colleges, co-founded the Joining Forces initiative with the First Lady to support military families, and joined her husband on his Cancer Moonshot 2020 listening tour.

What has Jill Biden said about her plans as First Lady?

Biden stepped up her political participation in her husband’s 2020 campaign, taking a leave of absence from teaching to join him full-time on the campaign trail for the first time. “He’s always supported my career. And this is a critical time for me to support him because, you know, I want change. I want a new president,” she told CNN.

She’s also said that, as First Lady, she would continue to advocate for many of the same causes she worked on as Second Lady. “Education would be right up there—and military families. I’d travel all over this country trying to get free community college,” she said, per CNBC. “We need good reading programs, and we need equity in schools. We’re competing in this global market, and the U.S.’s standing has got to get better.”

Still, Biden continued to participate in online teaching training sessions throughout the campaign, The Washington Post reports. If she were to return to her post as a professor at NOVA, Biden would make history yet again as the first First Lady to hold a job outside of the White House. Indeed, in a CBS Sunday Morning interview earlier this year, she said, “If we get to the White House, I’m going to continue to teach. … I want people to value teachers and know their contributions and to lift up the profession.”

'We wanted to make a fairy tale dress, like a Disney movie'

Sat Nov 7 , 2020
Emma Corrin has already described how everyone on The Crown’s set fell silent when she appeared in the recreation of the Emanuels’ concoction. The atmosphere at the moment Diana was changing into her own dress, was comparable: “We knew there was all this noise outside, but we got her ready […] 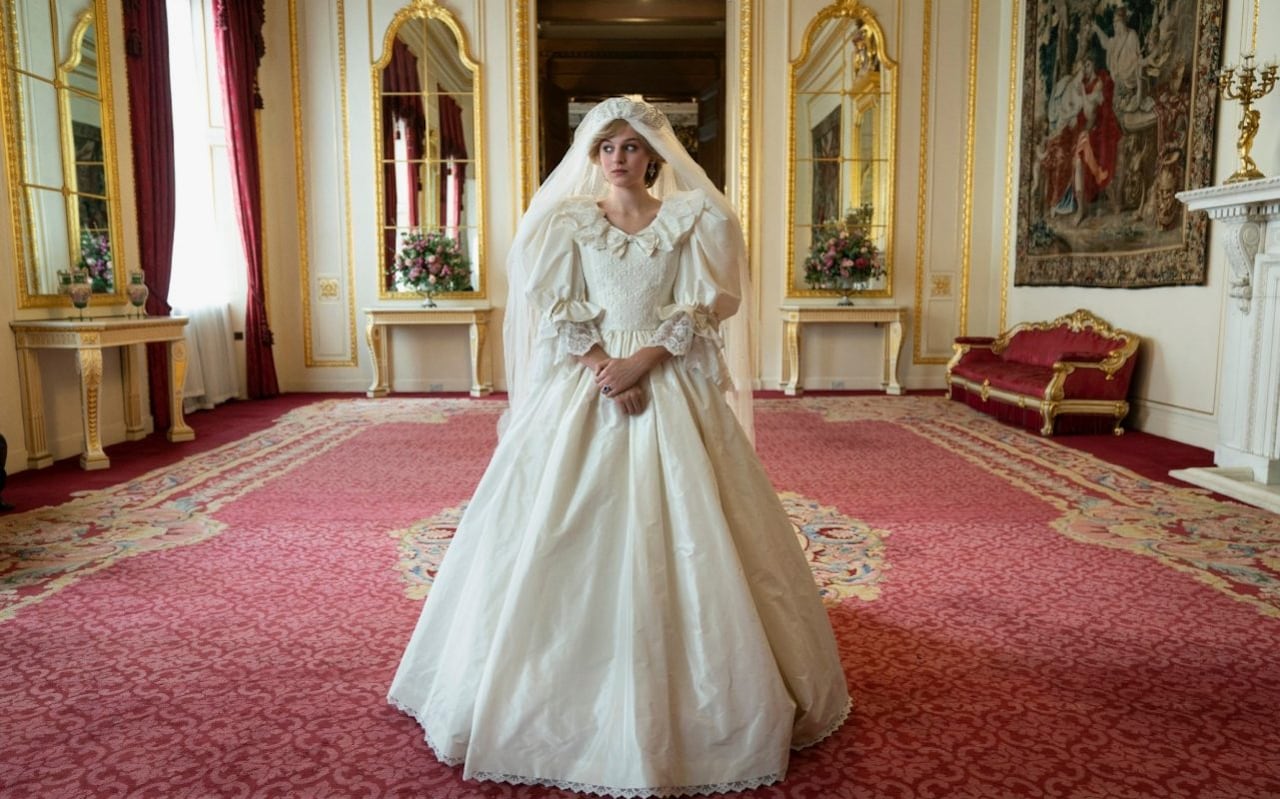