(Bloomberg) — The Ivy League canceled sports competition for the upcoming semester because of health and safety concerns about the coronavirus pandemic, becoming the first Division I conference in the U.S. to scrap football.

The conference, whose eight members include Harvard University, Yale University and Princeton University, made the move Wednesday, according to a statement.

“No decision has been made about competition in the winter or spring terms, including whether or not we can move fall sports into the spring,” the league’s executive director, Robin Harris, said in an interview. “There won’t be basketball games or hockey games or other sports in the fall.”

U.S. colleges are presenting their plans for the semester that begins in August or September, instituting steps for the safe return of students. They’re also deciding whether it’s too risky to resume the high-contact sport of football, which can bring in sizable revenue for a school and the surrounding area while subsidizing athletic programs that don’t make money.

The Ivy League’s decision follows similar pullbacks by smaller schools such as Bowdoin, Williams and Morehouse colleges, a contrast to the large universities that haven’t announced plans and regularly draw tens of thousands of fans.

CBS reported earlier that programs were notified of the cancellation plans.

The news will put pressure on other conferences and schools, said Christopher Marsicano, assistant professor of the practice of higher education at Davidson College in North Carolina.

“Conferences will now have to explain how they can do a better job of protecting their athletes than the Ivy League,” Marsicano said, who’s tracking college responses to Covid-19. “This decision by the Ivy League gives cover to every institution that is wary of having football in the fall. Every single one.”

At Rutgers University in New Jersey, where students will mostly attend classes remotely this fall, new President Jonathan Holloway said at a news conference Monday that a decision on fall sports would probably be made within the next two weeks by members of the Big Ten conference. Presidents and chancellors are in “intense conversations,” he said.

Division I, with football powerhouses such as the University of Alabama and Ohio State University, represents the highest level of competition sanctioned by the National Collegiate Athletic Association. Teams from smaller schools are usually in Division II and III, but can also drive enrollment to less-wealthy schools that are dependent on tuition.

“With the safety and well-being of students as their highest priority, Ivy League institutions are implementing campus-wide policies including restrictions on student and staff travel, requirements for social distancing, limits on group gatherings, and regulations for visitors to campus,” the Ivy League said in the statement. “As athletics is expected to operate consistent with campus policies, it will not be possible for Ivy League teams to participate in intercollegiate athletics competition prior to the end of the fall semester.”

Yale, the second-richest private school in the U.S. by endowment size, announced last week that it plans to reopen for a portion of undergraduates with most classes online. The university said it would limit travel for students and staff, so it’s unclear how its teams could have competed in tournaments and other events off campus if sports hadn’t been canceled.

In detailing their own plans this week, Harvard and Princeton said they would limit cohorts of students on campus, making it improbable to field teams with a fraction of the available students. Athletics is part of the broader educational mission and not treated differently from the rest of the academic enterprise, according to Princeton’s president, Christopher Eisgruber.

“We are going to apply the same principles across our activities,” Eisgruber said in an interview earlier in the week. “Our athletes are first and foremost students.”

Harris said the league considered ways to make competition work. But schools’ restrictions on matters such as visitors on campus and state rules such as those limiting gatherings had to prevail, leading to a “sad decision.”

“We looked at ways can we could do day trips — we looked at so many different scenarios,” she said. “The campus policies became fine-tuned and it was clear competition was not feasible. This wasn’t a quick decision.”

Still, the news is difficult for students, including seniors whose seasons may have ended.

“It’s disappointing to hear that no sports will be allowed in the fall, but we understand the need to put the health and safety of the students and student-athletes first,” said Tori Andrew, a basketball player for Yale entering her senior year. “We’re hopeful that we may be able to have real games in the spring, and potentially even practice together in some form or another in the fall.”

Andrew said she’s not considering taking a year off to play the following year because she already plans to attend law school. “For many underclassmen on my team and others, it is a serious consideration,” she said.

The Ivy League was the first group to stop its basketball tournament and other sports in March as the virus rapidly spread. The league was quickly followed by other schools across the country canceling sports events.

The colleges are among the richest in U.S. higher education, and they don’t have the same kind of revenue risk from canceling sports faced by the majority.

“The schools with the most prestige, the most power, the most money tend to be affected less by economic downturns and these kinds of changes,” said Willis Jones, an associate professor of higher education at the University of South Florida who studies the finance of intercollegiate athletics. “It’s not going to impact the bottom line in the same way that it will for other institutions.”

This year will mark the first time the Yale-Harvard football game — one of the biggest rivalry matchups in college sports — isn’t held since World War II. Harvard, in Cambridge, Massachusetts, suspended football at the time.

Morehouse, a prominent historically Black college in Atlanta, is one of only a few schools other than the Ivy League to announce that football is off for 2020.

“I can only ask for your understanding and respect for the fact that the college is prioritizing your health and safety ahead of all else,” President David Thomas said last month.

Reopen or you may lose federal funds

Thu Jul 9 , 2020
Determined to reopen America’s schools despite coronavirus worries, President Donald Trump threatened Wednesday to hold back federal money if school districts don’t bring their students back in the fall. He complained that his own public health officials’ safety guidelines are impractical and too expensive. Shortly afterward, Vice President Mike Pence […] 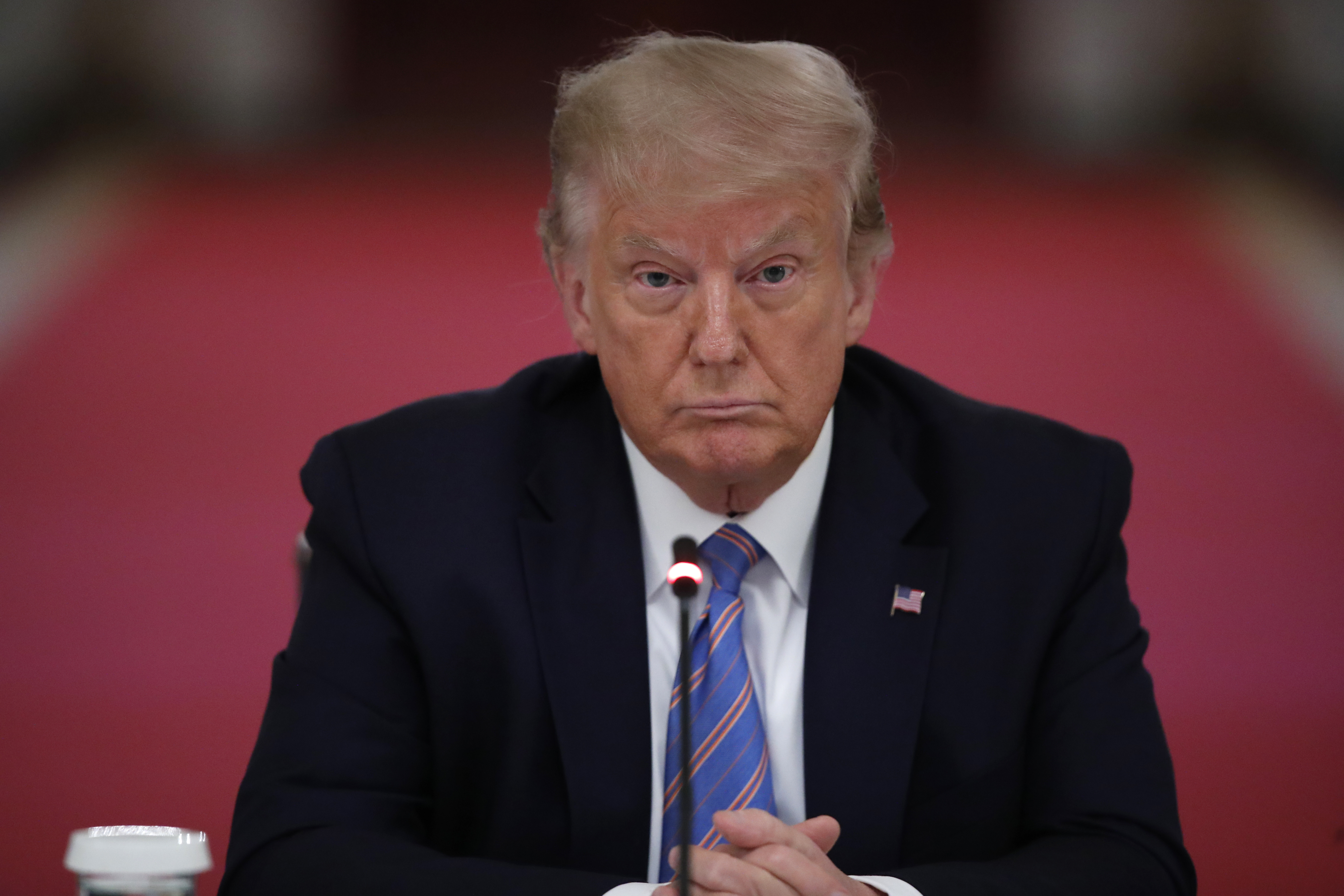