Fifty-six may sound like an innocuous, nothing kind of number, but when you are a midlife woman, it can be a more momentous one. In light of 56-year old Jane Garvey’s decision to quit Radio 4’s Woman’s Hour, and fellow BBC broadcaster, Fiona Bruce admitting that she hadn’t expected to be still on screen at the age of 56, you have to wonder if this age – no longer in your early 50s, but now on the way to 60 – is a critical crunch point for working women.

It might creep up on you slowly or be something you have been grappling with since your Big 5-0 celebration. You’re older, you’re wiser, your experience is second to none, but are you what people want on their TV screens, radios, or heading up their businesses any more? Have you lost your relevance in the working world? Do you look, sound, act the part you are supposed to be playing?

Or is it the other way round? Is a woman hitting 56 more likely to have reached the end of her tether with the demands and restrictions of modern wage slavery? Is it a desire to do something for yourself, something that actually suits you instead of vice versa, that strikes at this point? Garvey, for example, is not quitting broadcasting. She will host an interview show on Radio 4, as well as continuing with her very successful and popular podcast Fortunately, with fellow mid-lifer Fi Glover (a stripling at 51).

Journalist Marina Gask was 56 when she pivoted from 15 years of freelance writing, consulting and teaching to co-found Audrey, an online platform for midlife women. “After a difficult menopause I started to realise that a lot of what I was doing was resourceful, but not filling my heart with joy,” she says. “I wanted to reshape my future rather than just keep taking what I was offered. I wanted to create my next move.”

It helped that Gask felt surrounded by women who had done just that. “Eyes shining with adventure – they’d just sold their house and moved to the country, or were writing a book, or had left their husband; there were all these new ventures and I loved the energy I got from these women. We wanted to create an online platform that showed other women what they could do, too – and that’s where the idea of the Audrey Members Club came from.”

Why 56 though? “It’s heading towards 60,” she says. “It feels scarier than turning 50. You are still so busy with children and parents and keeping everything going at 50, but by 56 this really is serious now. I felt, I’d better get on with it.”

And why Audrey? Well of course it’s in homage to Audrey Hepburn, who was not only an incredibly elegant and glamorous movie star, but also one who made her own way, quitting Hollywood to be a UN ambassador and mother, without being forgotten or rendered invisible.

My own business, the therapist-matching platform welldoing.org, was launched as I turned 57, spurred on by redundancy but also the desire to make my own destiny, and do something I thought worthwhile. Along that road I sought the help of a therapist, which is quite a common stage in many women’s reconciliation with the changes in their life.

I spoke to one of our therapists (also a coach), Kate Graham, who is 59 and lives in West Yorkshire. “I see a lot of women of that age and I’ve just been through it myself,” she says. “It’s a real period of transition; there is a lot of loss and letting go, at the same time, there is the importance of finding something you really want to do, certainly in your working life.”

Graham says that one of menopause’s less lovely aspects is the sense that you are rendered invisible – no longer sexually desirable because of lack of fertility. But, she adds, this can be self-defining. “Women can feel like it’s all gone, and they’re worth nothing, so talking with a therapist can be useful. Also, if you’ve suppressed feelings all through your working life, now you have time to deal with them.”

And it can be, as she says, an interesting time. “You start off focusing on the losses, and as you come through it, you’re more aware of the freedom you have. Many women come out with a much clearer idea of what they want to do with their lives. If not now, when? Urgency and reality really kicks in.”

Research shows that positions of power in every sector of society are still dominated by men. Currently women make up just six per cent of FTSE 100 CEOs, 24 per cent of cabinet positions, 23 per cent of charity CEOs and 35 per cent of local councillors.

But for every Carolyn McCall, 58, who jumped from helming EasyJet to the corner office of ITV two years ago, and never seems off her game, there are many others like Sarah Sands, 59, who after doing one punishing job after another, most recently editor of the Today programme, is just having a break, writing a book about monasteries, some consultancy and freelance writing, yes, but also cooing over her first grandchild.

Although getting jobs in the first place has become easier for women, those who last the distance past 50 are likely to have found it harder and harder to age alongside male counterparts in the highly competitive corporate world. Vigorous beauty maintenance and never less-than pristine and expensive wardrobes have become a minimum requirement in a way high-flying men don’t even have to consider, let alone squeeze in around the extra-curricular life of working women, already stretched between the demands of children, parents, domestic administration and so on.

Lauren Chiren used to be a senior executive in financial services, which she left in her early 40s when she mistook early menopause for dementia. “I had started in this industry in my 30s and became senior quickly. It didn’t occur to me there was anything I couldn’t do – but the minute I wasn’t on my A-game, dynamics changed rapidly, and it unravelled quickly. At the time I thought if I wore sharper suits, or my hair was perfect, with immaculate heels, I could cover up. I worked harder instead of smarter.

“This is what I see many women go through in their 50s. We’ve slotted into this very masculine world, and left our authentic selves left at home. We need to recognise that women are driven by hormones, and that we will be more reflective, or creative, or analytical at certain times of month.”

Chiren is now 51 and an executive coach running Women of a Certain Stage; most of her clients, in the UK and US, are senior exec women who have reached ‘reflection point’.

“They are asking themselves, do they really want to spend the last 10 years of their working life giving heart and soul to the corporation, or is it time to take pleasure in their children, grandchildren, hobbies, regaining their own own health, and finding a different way to work?”

Women of 50+ may be the fastest growing economically active group in the UK but who says they want to engage with work in the same way they did when they were starting out? Especially in the Covid period, when many of us are rethinking our working lives altogether right now.

And though 56 might signal a tipping point for many women, actually, the struggle between feeling washed up and/or set on a new path will resonate with anyone feeling at all dissatisfied or demoralised about their career.

As that voice in your head whispers, if not now, when?

Louise Chunn is the founder of therapist-matching service welldoing.org

Thousands rallied at the Capitol, but CHP didn’t enforce COVID-19 rules. Here’s why

Tue Sep 8 , 2020
Part rally, part concert and part worship session, the gathering that brought thousands to the west steps of California’s Capitol building over Labor Day weekend flew in the face of pandemic-related mask and social distancing requirements, as seen in photos and video clips circulating online. Yet the “Let Us Worship” […] 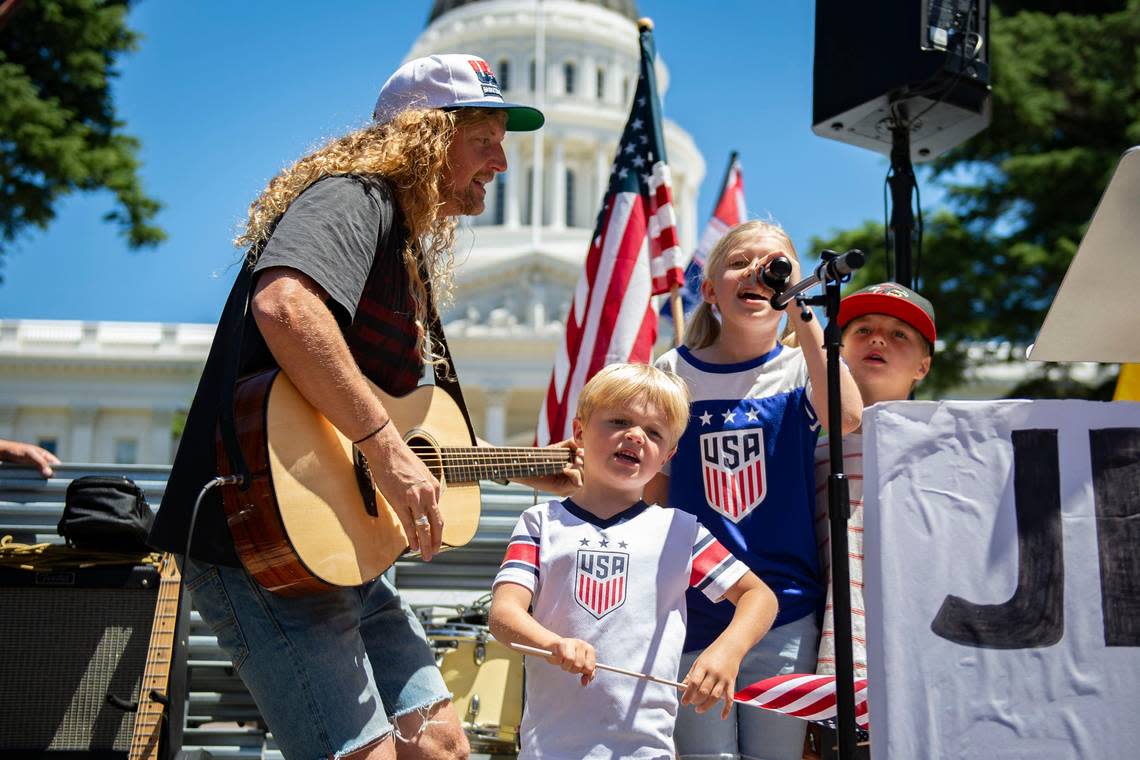