The champagne is chilled, the candle-lit tables heave with hydrangeas, the moonlight illuminates the superyachts moored adjacent to Capri’s magnificent Faraglioni rocks. The Giardini di Augusto, hired privately for one night only, is a typically opulent setting for the launch of a fashion coffee-table book. But this isn’t a typical launch: it’s one of the first gatherings of the glamorous jet-set this summer, an anomaly in 2020’s calendar of countless cancellations.

As 150 guests, among them Natasha Poly, Iris Law and Suki Waterhouse, totter up the vertiginous steps leading to the botanical gardens, it’s clear that this crowd, at least, are ready to embrace the ‘new normal’. Everyone queues patiently to have a thermometer gun pointed at their forehead, and accepts the linen bag containing a fabric face mask and hand sanitiser along with their table number.

Upstairs, model Cindy Bruna poses in a strapless ruffled Balmain gown, Louboutins, and matching face mask. There are sheets printed with the lyrics to Italian songs placed at each alfresco table setting, in preparation for a group singalong later.

The subject of the book we’re celebrating, entitled Window to a Future Fashion World, is Andrea Panconesi, CEO of luxury fashion giant LuisaViaRoma. He’s the grandson of Luisa and Lido Panconesi, who founded the company as a hat shop on Florence’s Via Roma in 1930.

There was, Panconesi says, “no doubt” in his mind as to whether the event would go ahead. “We thought a huge event wouldn’t be possible, so we decided to do a small event to launch the book. We thought, why not? Life has to go on. My opinion is that we will have to live with this [Covid-19] reality for the next generation. I don’t want my children and my nephews to grow up with the idea that there is a limit in their future.”

Small but mightily glamorous Capri is a routine stop-off on the summer itineraries of the ultra-rich on any normal year. But for Panconesi, this year the island proved even more of a draw. “We’re in the heart of the heart of Italy: it’s fantastic not only for the beauty, but for the warmth of the people who live here. They make you feel at home and it was very important that my guests feel safe and welcome.”

The launch wasn’t without its hiccups. Guest of honour and ‘host’ for the evening, Chiara Ferragni, couldn’t attend for personal reasons (there were whispers about the island of Sardinia, where she’d been holidaying with her husband and two-year-old son, being shut down due to unruly nightclubs). But guests forgave a patchy connection as she attempted to converse with Panconesi via video call: proof that not even high-rollers can escape the perils of poor reception.

The following evening, 300 guests gathered for the annual LuisaViaRoma x Unicef gala and charity auction, held within the quadrangle of the 14th-century Certosa di San Giacomo monastery-turned-museum. In contrast to the previous two years’ galas, which saw thousands gather in Porto Cervo and Florence, it was a more intimate affair – but the UHNWIs in attendance were no less ready to splurge.

Bids for jewellery, artworks, classic cars and exclusive experiences quickly rocketed into the hundreds of thousands of Euros, with over €1 million raised for UNICEF’s ongoing efforts to prevent, detect and treat Covid-19.

A live performance by Andrea Bocelli, a long-time supporter of UNICEF, brought tears to the eyes of more than one guest – the tenor’s soaring voice all the more poignant this year, as we recalled the impromptu operatic performances that took place on the balconies of locked-down Italians during the worst of the pandemic. Back then, it seemed inconceivable that the country would welcome the jet-set again so soon, but the consensus among guests was that the return to the bel paese couldn’t come soon enough.

“I was surprised that this [gala] was happening this year, but of course I was happy to come – it’s fantastic to see that these things can still take place,” said one guest who’d sailed in specially for the evening. “All the right precautions are being taken and I do feel safe,” she continued.

Those precautions, like most things Covid-related, were somewhat bewildering in their inconsistencies. In Capri, masks must be worn in shops, common areas of hotels and outdoors in the narrow streets – yet not when sitting shoulder-to-shoulder at one of its celebrated restaurants. The drivers of open-air taxis that transport guests to the beach face a hefty fine if their passengers don’t wear masks, yet when they drop them off, the sea is a socially un-distanced soup of tanned limbs and mask-free faces.

For their part, the LuisaViaRoma hosts policed the wearing of masks as closely as possible. There was no ‘official’ after party – “it wouldn’t be appropriate,” said Panconesi – but nevertheless, the terrace of the Grand Hotel Quisisana hotel was still abuzz, and the sound of clandestine DJ sets from within private villas rang out across the historical centre, until the very early hours.

For LuisaViaRoma, which spearheaded e-commerce way back in 1999, business has never been as brisk. During lockdown, sales were up “30, 40, 50 per cent,” Panconesi tells me, and he is far from fazed at the potential impact that the lack of physical events might have on the fashion industry.

“Nobody needs to buy anything – our clients have everything already. They buy clothes for the pleasure of owning them, not specifically because they have a wedding or a party. It’s an excuse. If there were no weddings or parties, they would buy it anyway.”

Panconesi, “by nature”, sees the positive in the events of this year. His 300-strong workforce in Florence have been working from home “better than ever”, and that is set to continue. “Change is normal and it has been accelerated thanks to the pandemic – something that was already in process but might have happened in three years has happened in three months.

“Everyone has a much better style of life now, working from home in their own ambience without having to commute, spending more time with their family,” he continues. “For me personally, spending time at home has allowed me to deepen my relationship with my family and I’m very grateful.”

I ask if he sees the irony in the fact that a company so grounded in innovation and the digital world should be one of the only fashion businesses – along with fellow Italians Dolce & Gabbana – to host physical, rather than virtual, events this year.

“I have always said, even 20 years ago, that physical and virtual reality are going to become ever closer. The more our online business grew, the more people asked me if the physical store is over. Of course not: they are two different worlds, but they will merge more and more as technology becomes more advanced. They are still both very important and they help each other to develop.

“The book is another example: I thought launching a physical coffee-table book was maybe going backwards, and at the start I was totally against it. I want to look forward, not backwards. But in reality, it’s timeless.”

It seems that his driving motivation is to surprise people – whether that’s by facilitating online orders within a physical store at a time when the world wide web was in its infancy, or hosting a celebrity-studded charity gala in the midst of a pandemic.

“Nobody expected us to do this, nobody else is doing it, but we are proud to be different. It’s in our DNA. I want to be surprised, I want to surprise other people, and if I can’t do that then I fail. Ultimately, we have to show to the younger generation that life will go on.”

Sign up for the Telegraph Luxury newsletter for your weekly dose of exquisite taste and expert opinion.

Thu Sep 10 , 2020
(Bloomberg Opinion) — Since 2016, the U.S. has been seeing declines in the number of new foreign students coming to study at colleges and universities here. Likely culprits include currency fluctuations, stronger competition from other English-speaking countries, big cutbacks to Saudi Arabia’s once-huge study-abroad program and, yes, the foreigner-unfriendly policies […] 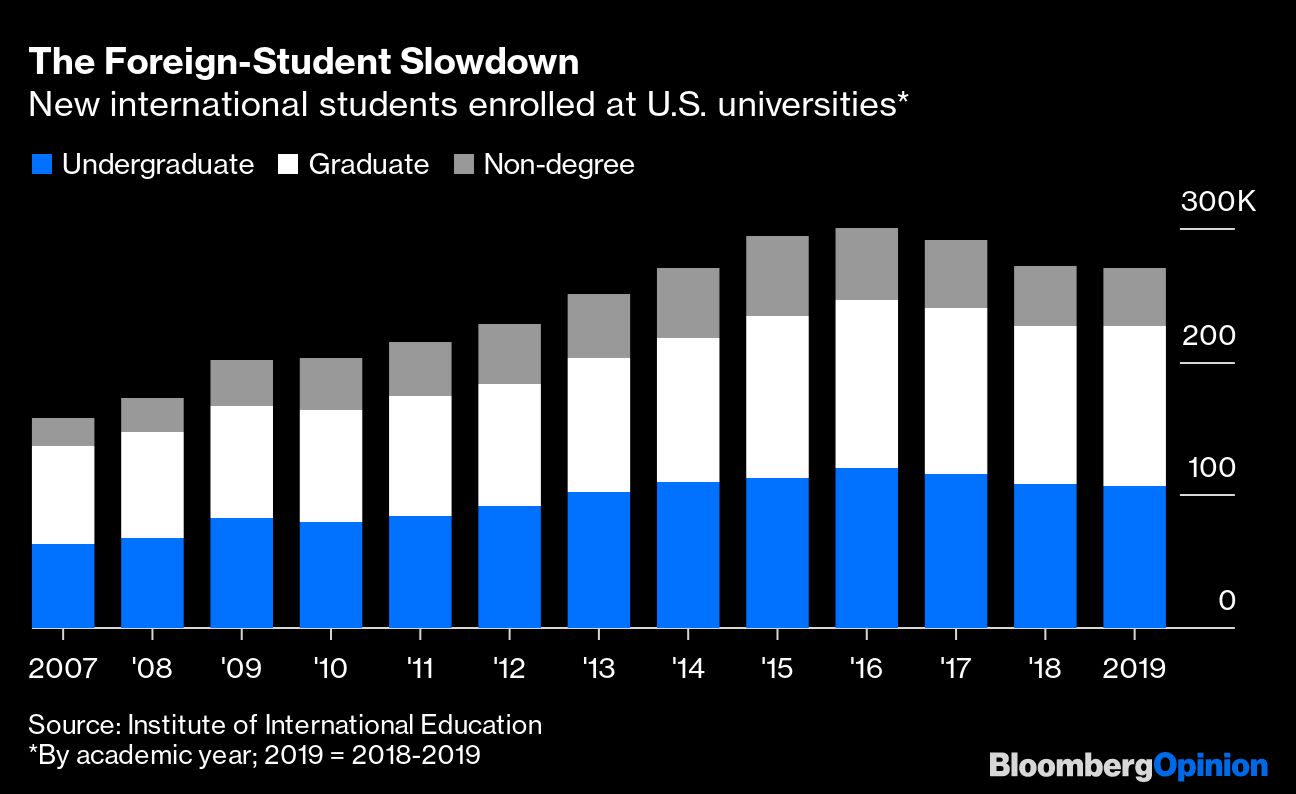