If the streaming wars reinvented network television, the digital streaming device Roku amounts to something like basic cable. Through purple software packaged in a set-top box or smart TV, Roku peddles a discount option for the average viewer, bundling a limited range of shows and movies on what they call The Roku Channel. For a wider selection, users can consult the Channel Store, an App Store-esque glut of paid, free, and amateur offerings. It’s a popular set-up. As of June, some 43 million households had an active Roku account—millions more than the population of California.

Scrolling through the Roku Channel Store is the TV viewer’s answer to crate-digging: thousands of titles, many of them familiar, multiple copies of Jerry McGuire, and a sprawling collection of obscure odds and ends, detritus from the over-productive arm of the American entertainment industry. A recent trip through its 3,000-odd selections turned up a military tactical guide called Warrior Poet Society Network, a Lego toy review channel 111LegoNetwork111, a collection of aquatic screensavers called Reef Diving Backgrounds, two separate shrines to the 1950s crime show Racket Squad, and a tween program called 911 Gurls’ Topics, whose series include “Do It Gurl,” Do It Gurl Season 2,” “See Gurl Try,” and “What’s Up With Haley?”

Roku’s low bar for entry, however, has also made it a home for content unwelcome on other streaming services. Earlier this month, Gizmodo reported on three Roku channels—Peeps TV, Pride Outdoor Network, and Sabbath School TV—that promote anti-vaxx quack science and misinformation about the global pandemic, including the viral conspiracy video Plandemic, and its equally debunked sequel Indoctornation 2.

Elsewhere, a channel called Free or Die TV offers programming on the debunked ties between vaccinations and autism. The same developer put out Truth Files TV, which invites viewers to join them “on an unabashed journey through nonsense and non-truths and ultimately to truth and reality,” but pushes the same fake science. Also on there: Truth in Media from Ben Swann, the former reporter for Fox News and Russia Today who resigned after promoting Pizzagate, another unfounded theory alleging the Clintons ran a child-sex ring out of a D.C. pizza shop. The channel UFOTV features movies like “Emerging Viruses and Vaccinations,” pushing false claims about “man-made viruses” and the dangers of vaccines. Similar ideas can be found on The Conspiracy Theory Channel, Conspiracy Theory Channel, Zeitgeist Conspiracy Channel, and an option popular in the White House: One America News Network.

But viewers exhausted by the Roku Channel and Channel Store have a third, lesser-known option: Roku’s private channels. Officially called “Non-Certified Channels,” these unregulated networks are not listed in the Channel Store and are ineligible for assistance from Roku Support. But with an access code—all easy to find online—viewers can add hidden programming from their computer directly to their TV, with little oversight other than a brief disclaimer:

THIS IS A NON-CERTIFIED CHANNEL. Roku requires all channels to abide by Roku’s terms and conditions, and to distribute only legal content. Roku does not test or review non-certified channels. You acknowledge you are accessing a non-certified channel that may include content that is offensive or inappropriate for some audiences. Moreover, if Roku determines that this channel violates copyright, contains illegal content, or otherwise violates Roku’s terms and conditions, then ROKU MAY REMOVE THIS CHANNEL WITHOUT PRIOR NOTICE, AND YOUR ACCOUNT MAY BE BLOCKED FROM ADDING ANY OTHER NON-CERTIFIED CHANNELS.

Non-certified channels are ostensibly for beta-testing and focus groups. But Roku’s Direct Publisher program makes it easy for anyone to create a channel of their own. Tom Roth, the electrical engineer who runs RokuGuide.com, an independent and comprehensive channel catalogue, told The Daily Beast he made one in an afternoon as a way to store vacation photos.

“You can sign up and create a free account,” he said, “If you want a Roku [private] channel, you’re assigned a vanity code. You can use it and then click the button to never publish it in the Channel Store.”

As a result, Roku’s back network of private channels heightens both the weirdness and darkness of its public one. There are low-budget performance art-type programs, like hungo-Vision—an array of 70 videos from artist Butch Hungo, whose short film I Walk Erect resembles something out of a Tim & Eric sketch. There’s an archive from the 1997 Baltimore public access channel Atomic TV that describes itself as “Best Worst TV, A Media Maxi-Pad absorbing the continual flow of Pop Culture.” There’s a channel dedicated to “Musical performances from Disney’s 2014 Night of Joy.”

But mixed in with the lighter stuff are channels that didn’t meet whatever opaque standards Roku upholds for its public store. Viewers can add Al-Mayadeen, the pan-Arab station that functions as a Hezbollah mouthpiece, whose director of programming once argued that Bashar al-Assad was “subject to an international conspiracy” over claims that his regime slaughtered Syrian civilians. There’s also Church Militant, a Catholic-sect station whose excommunicated founder, Michael Voris, has called to impose Catholic monarchy and limit voting to “faithful” Catholics. “The only way to run a country is by benevolent dictatorship,” Voris once claimed, “who protects his people from themselves and bestows on them what they need, not necessarily what they want.”

After getting fired from FOX, Bill O’Reilly revived his career with a private Roku channel called No Spin News, which recently went public in June. And Accent Radio Network, a Rhode Island-based radio show that shuttered when its founders were indicted by the Feds in 2012 for selling fake cancer cures, has also come back on with a private Roku channel. The afternoon I tuned in to one of their shows, Daniel Chapter One, the host was praising South Dakota for its unbothered COVID-19 response. “They didn’t shut down,” he said. “And no face-diaper mandates in the state!”

Roth, who has run RokuGuide.com for a decade this September, said that in recent years he’s seen fewer private programs—not because Roku has begun regulating them, but because public ones have gotten easier to make. “Roku has made it so easy to create a channel, so we’re seeing fewer private [ones].” Roth said. “A lot of the time, private channels become regular channels.”

For the past few years, the story of conspiracy and fringe far-right media has been one of displacement. Social media and streaming platforms restrict misinformation; then, its pundits move elsewhere—from YouTube, to Facebook, to a series of increasingly obscure and badly named sites or apps (Gab, MeWe, Parler), widening the gulf between research-based programs and hate-filled or intentionally false ones. The end game of deplatforming is to minimize influence—and, according to some research, it does. It also effectively creates two kinds of markets, and Roku remains among the few streaming services to permit both. “Our mission,” the company’s About page reads, “is to be the TV streaming platform that connects the entire TV ecosystem around the world.”

Sat Aug 22 , 2020
Kremlin critic and opposition leader Alexei Navalny, who has suffered a suspected poisoning, was in a stable condition in hospital on Saturday after being flown to Berlin following a standoff over his medical evacuation from Russia. An air ambulance carrying Navalny, chartered by the German NGO Cinema for Peace, touched […] 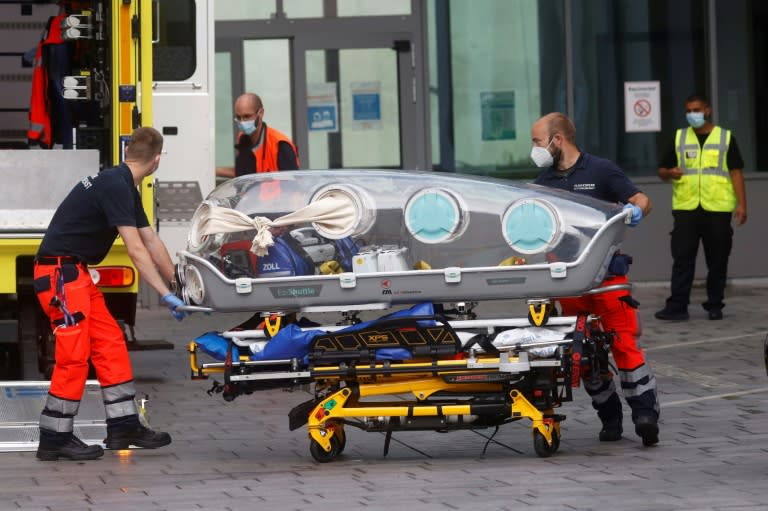