Entering the world of QAnon is like stumbling into a fringe fantasyland embracing every crackpot conspiracy theory of the last two decades.

Adherents believe one of Lady Gaga’s getups at the recent MTV Video Music Awards was coded confirmation that she is part of a secret cabal of devil-worshiping pedophile cannibals.

They think a color-blocked star used on signage at the recent Democratic National Convention is a cleverly disguised depiction of the Sigil of Baphomet, a symbol of the Church of Satan.

David Reinert holds a large “Q” sign while waiting in line on to see President Donald J. Trump at his rally August 2, 2018, at the Mohegan Sun Arena at Casey Plaza in Wilkes Barre, Pennsylvania. “Q” represents QAnon, a conspiracy theory group that has been seen at recent rallies. (Rick Loomis/)

Many believe Hollywood celebrities, Democratic leaders and elites engage in the ritualistic torture of children to harvest a mythical, psychedelic drug called Adrenochrome from their tiny adrenal glands.

Some suggest Tom Hanks and Idris Elba got coronavirus from tainted Adrenochrome. Others made the easily debunked claim Hanks’ quarantine in Australia was cover for an arrest linked to the demonic plot.

Lots are convinced countless kids are being held prisoner by a human trafficking ring with secret tunnels under Central Park.

People march during a “Save the Children” rally outside the Capitol building on August 22, in St. Paul, Minnesota. Hundreds of rallies around the country, meant to decry human trafficking and pedophilia, are scheduled for today, some of which have been linked to social media accounts promoting the QAnon conspiracy. (Stephen Maturen/)

Anchoring the half-baked hysteria is the belief that a shadow war between good and evil is playing out behind closed doors with President Trump valiantly fighting to save humanity by arresting and sometimes executing the depraved “deep state” masterminds.

Disciples are convinced that a covert government insider with top-level “Q” security clearance is keeping QAnon supporters informed by dropping cryptic “breadcrumbs” on an Internet forum that appears to be a white nationalist breeding ground.

The identity of the alleged operative, known only as Q, is the subject of endless debate. Q is almost universally thought to be a man, a key player in the biblical battle whose code name is proudly emblazoned on hats, shirts and signs at Trump rallies and far-right demonstrations.

Conspiracy theorist QAnon demonstrators protest during a rally to re-open California and against Stay-At-Home directives on May 1, in San Diego, California. (SANDY HUFFAKER/)

“For believers and followers, QAnon provides a recreational pastime, a sense of belonging and even a new identity and mission in life,” he said.

QAnon’s choose-your-own-adventure absurdity would almost be funny if it wasn’t so dangerous and contagious, leading to several incidents of violence and arrests since it essentially became the new face of the infamous “Pizzagate” and “Pedogate” conspiracy theories in 2017.

A recent study published by the London-based Institute for Strategic Dialogue found “a significant uptick” in QAnon’s online activity in 2020.

A man waves a QAnon conspiracy flag at a protest of coronavirus skeptics, right-wing extremists and others angry over coronavirus-related restrictions and government policy on August 29, in Berlin, Germany. (Sean Gallup/)

It reported membership in Facebook groups dedicated to QAnon surged 120% in March while engagement shot up by 91%, an apparent byproduct of pandemic lockdowns.

Overall, membership in 109 of the most popular public QAnon Facebook groups exploded from 127,335 at the start of the year to 1.12 million by June, the ISD study found.

“(We) found sudden and large increases in both group membership numbers and in the interaction rates on posts within these groups,” report co-author Aoife Gallagher told The News. “This shows us clearly that the QAnon community is growing exponentially.”

She said with millions of people confined to their homes and spending a lot more time online, baseless QAnon assertions about COVID-19 have flourished.

“At a time of great uncertainty, a lot of people were searching for answers, and conspiracy theories often present simplistic answers to complicated issues and help people regain a sense of control that they may have lost during the pandemic,” she said.

A man wear a shirt with the words QAnon as he attends a rally for President Donald Trump at the Make America Great Again Rally being held in the Florida State Fair Grounds Expo Hall on July 31, 2018, in Tampa, Florida. (Joe Raedle/)

Indeed, thousands of QAnon Facebook pages with millions of followers were identified by the social media giant according to an internal report recently leaked to NBC News.

Experts say the nature of the Internet is clearly fueling the rise, with search tools and social media delivering people to virtual echo chambers where biases are quickly confirmed.

“If you show interest in one (conspiracy theory), recommendation algorithms will keep showing you similar content and send you down a rabbit hole,” Gallagher explained.

“I don’t think it would be possible — certainly not on this scale — without the Internet, where the lack of filters has produced a pretty toxic river of misinformation on a multitude of fronts,” David Neiwert, author of forthcoming book, “Red Pill, Blue Pill: How to Counteract the Conspiracy Theories That Are Killing Us,” told The News.

He said online QAnon groups can be most dangerous when they replace the “real-life social communities” that help people sort fact from fiction.

“Dehumanization is a very easy thing on the Internet, since all you’re really interacting with are bits on a screen, which is why trolling becomes so easy,” he said. “A trolling ethos can easily create communities based on intimidation and fear, which is what conspiracy theories and their scapegoating primarily are about.”

Pierre said QAnon’s traction might also be explained by the garden variety of “hooks” used to attract members, “including the ‘cult of Trump,’ the Christian evangelical undercurrent or the ‘solve-a-puzzle’ gaming aspect.”

“What’s not clear is just how many people are ‘true believers’ versus how many identify with QAnon dogma based on its metaphorical meaning,” he said.

“Similar to a religious text like the Bible or the Quran, it’s possible that many or most QAnon believers embrace its message without being literalists,” he said.

Supporters of President Donald Trump hold up their phones with messages referring to the QAnon conspiracy theory at a campaign rally at Las Vegas Convention Center on February 21, in Las Vegas, Nevada. (Mario Tama/)

Either way, QAnon is creeping into the mainstream, with 78 current or former congressional candidates having endorsed some part of the nutso ideology, according to the left-leaning watchdog group Media Matters.

QAnon supporter Marjorie Taylor Greene is expected to win her race for Georgia’s 14th congressional district in November after winning a tight runoff for the Republican nomination last month.

Michael Flynn, Trump’s former national security adviser who pleaded guilty to lying to the FBI during special counsel Robert Mueller’s Russia investigation, recorded a video of himself on July 4 in which he held up his right hand and recited the QAnon catchphrase, “Where we go one, we go all.”

A sign in the shape of a Q is held up as President Donald Trump attends his Make America Great Again Rally being held in the Florida State Fair Grounds Expo Hall on July 31, 2018, in Tampa, Florida. (Joe Raedle/)

For his part, Trump has retweeted multiple accounts linked to QAnon and called Taylor Green a “future Republican star” and “real winner.”

“I’ve heard these are people who love our country,” Trump said of QAnon during an Aug. 19 White House news conference. “I understand they like me very much, which I appreciate.”

“Disinformation based on fear is a potent political strategy,” he said, one “that has proven historically successful.”

Sun Sep 6 , 2020
Fans of Wuhan Zall, the Chinese football club from the epicentre of the coronavirus, will Sunday attend their first match since lockdown — and were so excited they could not sleep. For some, like Gao Yajun, it is the first time they have left the central Chinese city of Wuhan […] 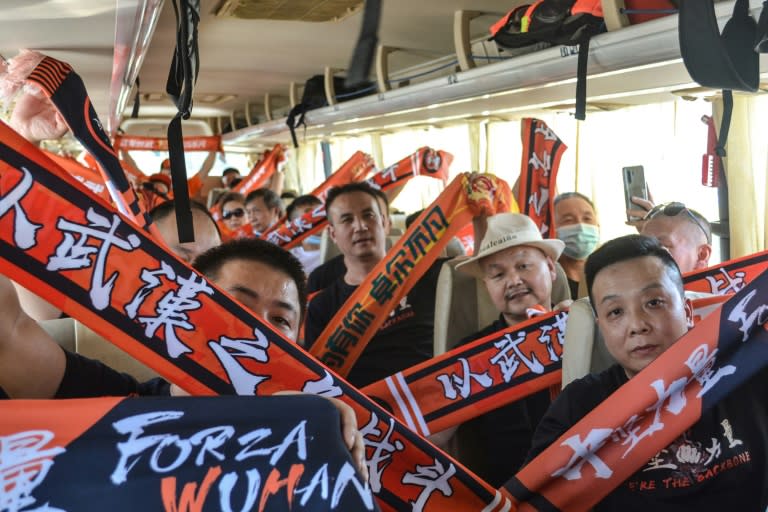