California overall is not experiencing the same alarming surge in COVID-19 infections as it did in late June and early July, but record-breaking death tolls reported this week underscore the continued seriousness of the coronavirus pandemic.

California set a new record Wednesday when it reported its highest COVID-19 death toll in a single day with 197 dead. On Thursday, the state reported another 194 deaths, the second highest single-day coronavirus death toll thus far.

Deaths have dramatically increased from the flat-line levels in May and June: As of Thursday, an average of 112 people died from the virus in California every day over the last two weeks. Two weeks ago, about 84 people died every day on average over a two-week period.

Some of those deaths, however, may have occurred several days or weeks ago because of the verification process used by local health officials.

In the last week, California reported nearly 60,000 new cases, bringing the state total now to more than 485,000 infections — marking a roughly 14% increase in seven days, according to the latest state public health data. The death toll stands at 8,909.

For the last two weeks, the positivity rate — the portion of tests returning positive — has hovered around 7.5%. That suggests that coronavirus cases are still steadily increasing across the state, but are not ballooning as they once were.

Still, there are some parts of the state where cases are continuing to dramatically rise. Fresno County, for example, had a positivity rate of over 10.7% this week. Tulare County was over 17.7%.

The Central Valley, as well as parts of Southern California like Imperial County, are seeing a dramatic increase in COVID-19 patients entering local hospitals. In the Sacramento region, Placer and Yolo counties reported fewer than 10 adult ICU beds available.

At least 6,700 people are in hospital beds with COVID-19 and about 30% of them are in intensive care units, according to state public health data released Thursday morning.

The number of people hospitalized with the virus is likely higher than that, because historical data from some facilities was not included in the state’s daily release because of a reporting issue.

The World Health Organizations suggests a rate of lower than 5% before reopening the economy, and California puts individual counties on notice when they hit 8% or higher.

Public health experts have repeatedly emphasized that reopenings should only occur when there is sustained declines in cases, rather than simply slowed or plateaued growth in infections.

All these ongoing COVID-19 concerns come as state officials try to learn more about who is most impacted by the virus, and attempt to assist Californians struggling to secure unemployment benefits and renter protections.

‘I thought I was going to die’: COVID-19 can ravage young adults, too

Five months into the coronavrius pandemic, it’s still true that older people typically get worse cases and have far higher death rates from COVID-19. But it’s also clear that far more younger people are getting infected by the virus than their parents and grandparents.

In Sacramento County, the 20-29 age group has emerged as the most infected group, followed by those in their 30s. And in some instances, those cases have been life-threatening.

Kris Obligar, a 27-year-old Sacramentan, recalls being in a hospital intensive care bed at Kaiser Permanente Medical Center in early July, terrified and crying. The virus had made it impossible to breathe, and her condition was deteriorating fast. Doctors told her they possibly needed to perform an emergency tracheotomy on her – cutting a hole in her throat.

“I thought … I might die,” the Sacramento speech therapist said. “My mind and body went into panic mode.”

She doesn’t know where she caught the virus — she said she had been taking precautions. Obligar would social distance with friends at the park, wear a mask to the store and elsewhere, and order takeout rather than sit at restaurants.

“I feel like most people think that having ‘2’ or ‘3’ in front of their age is a silver bullet and (is) going to protect them, and that is simply not true,” said Dr. Vanessa Walker, a critical care physician at Sutter Roseville and medical director of Sutter’s regional electronic ICU system. “This isn’t an in-and-out thing, just out of work for a week, and back to business as usual.”

The state Department of General Services has received 188 ventilators out of 8,000 promised by Ashli Healthcare Inc. of Bakersfield, the state’s main supplier, department spokeswoman Monica Hassan said this week.

As part of the $139 million deal, Ashli was supposed to have delivered more than 1,000 by the end of July and another 3,500 in August, with the balance of the shipments due in September.

Hassan said the issue stemmed from a supply chain and raw material issue that “suppliers across the nation are facing.

“DGS recently received a list of additional ventilator models from the state Emergency Medical Services Authority and is working to procure those models as a back-up plan to acquire as many ventilators as possible,” she said in an email.

Sacramento-area business leaders believe the coronavirus pandemic may also carry with it an economic silver lining — a chance to lure thousands of high-tech workers from the Bay Area.

Here’s the idea: Some of the Bay Area’s leading tech companies are telling their employees they can stay home permanently. Twitter and Square, for instance, have said anyone who wants to work remotely can continue doing so even after their offices reopen.

If tech workers are no longer tethered to their offices in San Francisco, why not just move to Sacramento?

Broome acknowledged that the Sacramento area is laboring under something of a handicap: The economy’s poor, undermining what he called “the optics of being healthy” as the region tries to sell itself. The unemployment rate in Sacramento now hovers around 12.8 percent.

But some Sacramento experts believe the influx of workers will help the region overcome one of its biggest stumbling blocks as it tries to diversify its economy: the shortage of high-tech talent, especially in the executive ranks. Although UC Davis and Sacramento State have become reliable sources of computer engineers, some companies say they’ve struggled at times to make all the hires they need.

That’s because of what Hilliard calls an “antiquated” system for processing these claims, one that hasn’t yet been modernized.

The exact details of the federal benefits have not yet solidified in Congress. But as the original $600 weekly unemployment supplement introduced under the CARES Act nears expiration — July 31 is the last day — millions of Californians who depended on the extra financial help could soon face budget hardship.

California’s unemployed workers, like those in the rest of the country, received an extra $600 payment each week from late March until last week. Congress is considering continuing the payment, but at a reduced rate.

“I think that the level of outrage that you’re hearing today would be nothing compared to the level of outrage if we tell the people of California it would take almost half a year to process their unemployment insurance supplement,” Assemblyman Jay Obernolte, R-Big Bear Lake, told Hilliard.

Those will supplement existing test sites at Cal Expo, the La Familia Counseling Center in south Sacramento and several other sites.

The sites will open next week and will operate by online appointments for Sacramento County residents, regardless of legal status. Each site will be open one day a week.

Health officials said test results will be available within three days. Currently, many test results in Sacramento and throughout the state are being delayed by lack of materials, forcing some people to wait more than two weeks to learn whether or not they are infected by COVID-19.

For detailed information, including days of operation and location, go to the Sacramento County COVID-19 testing sites web page.

Citing the risk of increased COVID-19 exposure, among other concerns, Placer County supervisors approved extending an alcohol ban along the Truckee River until mid-October.

Effective immediately, the ban will be enforced by the Sheriff’s Office along the river between Fanny Bridge and the River Ranch.

With residents looking to get outside during the state’s stay-at-home order, recreation along the river has significantly increased since Memorial Day weekend. County officials say commercial rafting businesses have voluntarily reduced boat capacity by 50% to address COVID-19 concerns, but there are more and more private rafters coming each week.

“With our current environment of uncertainty, and many of our businesses already having to take measures to reduce or close their operations due to an increase in COVID-19 cases, safety must be our top priority,” District 5 Supervisor Cindy Gustafson said in a statement.

The six-county region of Sacramento, El Dorado, Placer, Yolo, Sutter and Yuba has seen 14,813 cases of the coronavirus as of Thursday night. A total of 194 have died from the virus in the region.

Sacramento County reported 150 new cases Thursday morning. The total number of infections in the county is now 9,664. The death toll in the county is currently 127. At least 277 patients with COVID-19 are in hospitals, and 83 of them are receiving intensive care.

Yolo County has reported a total of 1,494 cases and 41 deaths. On Thursday afternoon, the county reported 18 new COVID-19 cases but no new deaths. The county on Wednesday reported 29 new cases and two more deaths due to the virus. As of Thursday morning, there were 11 patients in hospitals in Yolo County, five of whom were in intensive care. The county had four ICU beds remaining, according to state data.

Placer County has reported 1,822 cases and 15 deaths, including 36 more infections Thursday. There are 59 people hospitalized in the county because of the virus and 12 are being treated in ICUs. The county has two more adult ICU beds available.

El Dorado County has reported a total of 613 cases and one death from COVID-19. On Thursday, the county reported 24 new cases and no new deaths. As of Thursday morning, three infected people in the county were hospitalized; two of them were in intensive care, according to state data. The county reported 10 new cases on Wednesday. Nearly half of the total number of cases have been reported in the Lake Tahoe region.

Sutter County has reported a total of 755 COVID-19 cases and six deaths due to the virus. The county added 24 cases to its total Thursday evening, but no new deaths. The county reported 32 new cases Wednesday and 34 new cases Tuesday, along with two new deaths this week. Eleven infected people in the county were hospitalized Thursday, and seven of them were in intensive care.

Worldwide, more than 17.3 million people have been infected with the coronavirus and over 674,000 people have died as of Thursday night, according to data maintained by Johns Hopkins University.

The United States accounts for the largest share of infections for any country, with nearly 4.5 million cases and more than 152,000 deaths.

What is COVID-19? How is the coronavirus spread?

Coronavirus is spread through contact between people within 6 feet of each other, especially through coughing and sneezing that expels respiratory droplets that land in the mouths or noses of people nearby.

The Centers for Disease Control and Prevention says it’s possible to catch the disease COVID-19 by touching something that has the virus on it, and then touching your own face, “but this is not thought to be the main way the virus spreads.”

Symptoms of the virus that causes COVID-19 include fever, cough and shortness of breath, which may occur two days to two weeks after exposure.

Most people develop only mild symptoms, but some people develop more severe symptoms, including pneumonia, which can be fatal. The disease is especially dangerous to the elderly and others with weaker immune systems.

Fri Jul 31 , 2020
Marquise Goodwin is opting out of the 2020-2021 NFL season to spend time with his family. The Philadelphia Eagles wide receiver announced his decision in a candid video posted to his YouTube channel on Tuesday, explaining that both his difficult road to parenthood with wife Morgan and the ongoing coronavirus […] 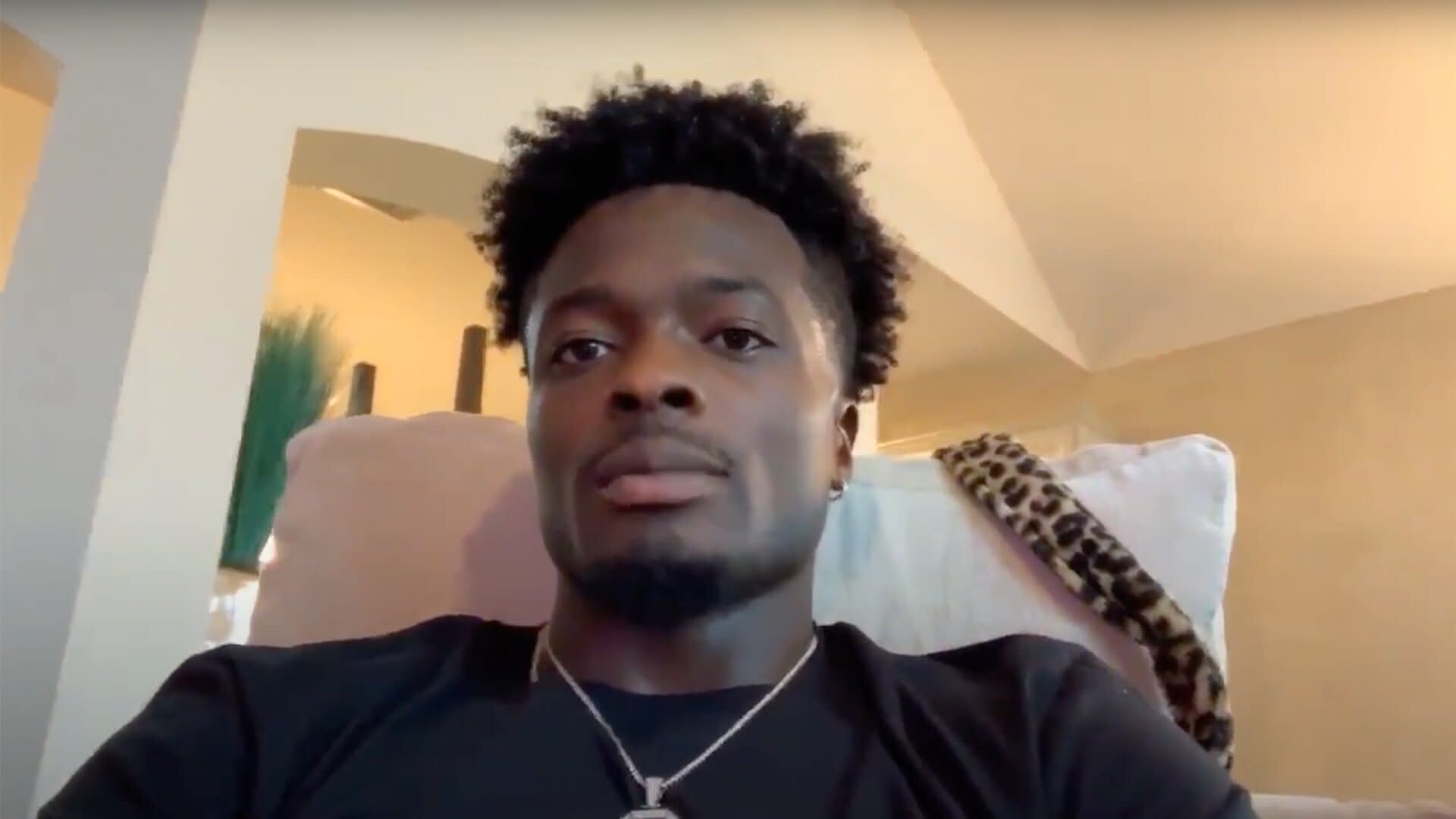