Iceland’s rising infection rate is edging closer to the UK’s quarantine threshold figure, according to new data – while figures in mainland Greece, Denmark and other ‘travel corridor’ destinations continue to climb.

Yesterday, Iceland reported 19.5 cases per 100,000 population, just shy of the UK’s red zone of 20 cases per 100,000 – beyond which, quarantine restrictions are usually triggered. Mainland Greece, which is currently on the safe list in England, Wales and Northern Ireland, reported 18.6 cases.

According to data gathered by the PC Agency, Italy and Sweden – which also have travel corridor status – recorded 16.8 and 16.4 cases respectively last week. Meanwhile, cases in Denmark – which remains on the UK’s safe list despite breaking the threshold a fortnight ago – have soared to 45.3.

Amid growing concerns for Britain’s own infection rate, staycations too are under threat. A three-week “circuit break” lockdown, thought to be earmarked for October half term, is under consideration, while the ‘rule of six’ has rendered many UK holidays illegal already.

Scroll down for more of today’s breaking travel news.

Why quarantine restrictions aren’t everything they seem

Britain’s list of travel corridor destinations has dominated the news ever since we reopened our borders for tourism – and the outlook changes every day. Today, Iceland’s rising caseload has pushed it closer to the quarantine threshold; Greece and Italy, too, appear to be on shaky ground.

However, focusing on the quarantine requirement for returning holidaymakers only covers one side of the story. If the FDCO removes a destination from its travel corridor, it also officially advises against all non-essential travel there. A holiday is not considered essential. This will likely invalidate your travel insurance, if you decide to go on holiday regardless of the FCDO’s advice.

You will need to quarantine for 14 days when you return, yes – but should you become ill or experience disruption on your trip, you may need to foot the bill yourself.

But there is (a glimmer of) hope. Emma Beaumont explains how to get insurance cover for a destination or holiday style if the FCDO currently advises against it.

This weekend should have seen thousands of holidaymakers flocking to Oktoberfest, in Munich – the annual celebration of all-things beer and bratwurst.

While the official events have long been cancelled, some private pubs are holding their own festivities – known as WirtshausWiesn, or ‘pub Oktoberfest’.

Thomas Cook, which relaunched as an online travel agent on Wednesday, has failed to commit to refunding customers for cancelled holidays within the 14 days required by British law.

Following an investigation by Which?, the travel agent told the consumer watchdog that while it was aiming for 14-day refunds – as required by the The Package Travel and Linked Travel Arrangements Regulations 2018 – it “cannot guarantee it in cases of large cancellations.”

Which? reported that Thomas Cook said it would “try to stick to 14 days, but that refunds could take longer”.

“The moment we got on the train, we knew that we had made the right choice. We were only going a few miles down the tracks, but lockdown has made us all a bit reticent, so even small journeys can now feel like an adventure…”

As 2020 continues to make a mockery of any long-term plans, Telegraph Travel columnist Ashwin Bhardwaj finds the joy in the tiniest bit of adventure – and even a little room for spontaneity, too.

Greece Covid-19 figures on the rise, as country reels from ‘medicane’ deaths

Hurricane-like storms have lashed central Greece over the weekend, resulting in two deaths and mass evacuations in regions north of Athens.

Hundreds of people were rescued from flooded buildings as heavy rain and high winds wrecked homes, shops and warehouses. Two people were found dead and another person was missing on Saturday – while emergency teams searched for a boat carrying 55 migrants after receiving a distress signal.

The storm – known as a ‘medicane’ for its hurricane-like ferocity – has now travelled southwards towards Crete.

The UK has placed restrictions on travel to some Greek islands, but the mainland is currently restriction-free for holidaymakers from England, Wales and Northern Ireland.

As of yesterday, Italy is reporting a seven-day case rate of 16.7 infections per 100,000 population:

Coronavirus infections continue to surge in France, with nearly 13,500 new cases recorded over the past 24 hours.

It was the second day in a row that new cases in France were above 13,000. Its seven-day infection rate is currently 97.5 infections per 100,000 population – more than double that of the UK.

In Paris, the Prefecture de Police warned in a tweet yesterday that there will be no more tolerance for bars and restaurants where rules to counter the virus are not respected, like standing at counters or failing to respect social distancing.

Iceland cases on the rise

Throughout the pandemic, Iceland has been hailed as a country that’s got its act together. In June, it reopened to tourism, and has applied a strict nationwide approach to testing – with all travellers required to isolate for 14 days on arrival, or take two Covid-19 tests on days one and five/six of their visits.

The strategy has seemed to work, with tourists trickling into the country slowly but surely. Departures of foreign passengers from Iceland via Keflavik airport numbered around 45,000 in July, according to figures from the Icelandic Tourist Board – although that number pales in comparison to the quarter of a million who passed through in July 2019.

Now, however, Iceland’s infection rate is creeping up: the country has reported 19.5 infections per 100,000 population. While that is still far below the UK’s own infection rate – a rising 36.4 per 100,000 – the figure could well see Iceland being added to the FCO’s ‘no-go’ list this Thursday.

Yesterday, countries around the world released their infection rates from the previous week – with Iceland and Greece reporting figures close to the UK’s quarantine threshold.

This morning, we’ll be looking into the status of key holiday destinations across the world, but first let’s take a quick look at the headline statistics, courtesy of Paul Charles of the PC Agency:

Eager travellers will be rewarded with record low airfares this winter with prices to sunny destinations falling by 92 per cent in some cases compared with pre-pandemic levels.

Those who missed their summer break can look forward to the colder months for a holiday, with prices starting at £14 for destinations in Europe.

A return flight from London to Morocco this December currently costs just £15, a 92 per cent discount from the average £192 it cost in the same month over the past two years, according to Skyscanner, a flight-comparison website.

An alliance of more than 5,000 travel and tourism companies across Europe have issued an unprecedented appeal for the introduction of airport testing to replace quarantine.

An open letter sent to the European Commission calls for a testing regime to help save the jobs of 27 million people who work in the industry.

The Telegraph, too, has launched the Test4Travel campaign, urging the UK Government to green-light testing at airports and ports to allow quarantine-free travel in time for Christmas.

The appeal comes as figures reveal that passenger traffic across Europe during September dipped to a new low, raising questions about the industry’s long-term recovery. Airline chiefs forecast that flying will not return to pre-Covid levels for up to five years.

Charles Hymas has the latest.

What did we learn yesterday?

Here are some of Saturday’s main headlines:

Where are the robotic overlords when we need them most?

Sun Sep 20 , 2020
With human contact risky during the pandemic, an army of robots could be just what society needs. (Nicole Vas/Los Angeles Times) In 2016, I unpacked my luggage at a newly constructed New York hotel only to realize that I had forgotten my toothpaste. I called room service, and a chipper […] 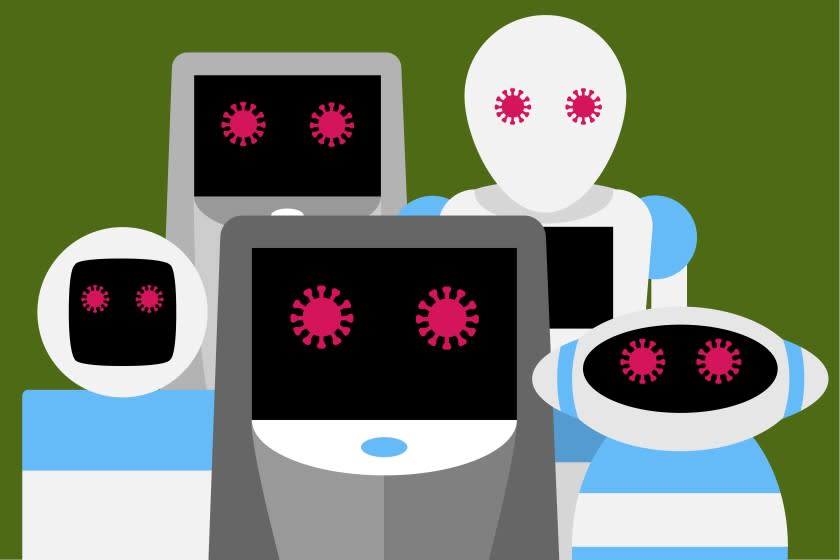