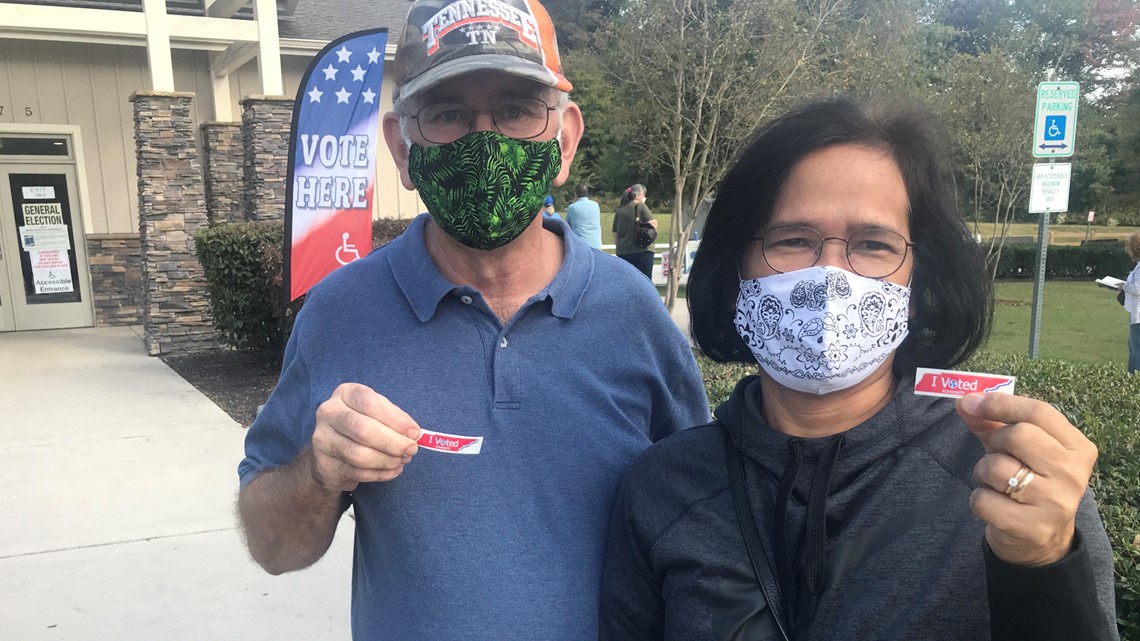 Regardless of what box you check, voters said they had a sense of pride when they cast their ballots.

Two things depict the first two days of early voting in Knox County: long lines outside of polling locations and selfies with ‘I voted’ stickers.

“I vote every single time,” Joel Ownby said. “It’s important. We are actually doing what a democracy should be doing. We are stating what we want our government to be.”

Voters who waited in line at New Harvest Park Thursday morning said they feel a sense of pride and responsibility to vote in this year’s presidential election.

“Even though you have to pick and choose what’s most important and who’s most important to support, you have a responsibility. It’s, in my view as a Christian, a way of being salt and light in my community,” Vicki Cannington said while she waited in line.

“I get such a feeling of liberation and freedom when I’m able to vote. As we know, there have been generations and years where black people did not have the right to vote and I believe there’s power in my vote. There’s power in my voice,” Tanika Harper said.

“I have that sense of being proud that I have the ability to vote, seeing how there was the suffrage movement. The things that it took for someone like me to actually cast their opinion, I’m just proud to be here,” Robin Day said.

“I’m a millennial, so it’s my generation and Gen Z who these elections are really affecting,” Karl Cannon said. “It’s my future. I have a six-year-old daughter, and it’s her future that this is going to affect.”

“If I don’t make a statement, whether I win or not, then I don’t have a right to complain,” Peggy Shute said.

Before you go vote, take a moment to study the sample ballot and read the questions on the ballot so you can get in and out of the polling place quickly: https://t.co/R8iH3TdYds pic.twitter.com/DN5cuz3rju

RELATED: Interactive map: Where you can vote early in East Tennessee

Early voting locations are open 10 a.m.-6 p.m. Monday through Friday, Oct. 14-24. On Saturdays, they are open between 11 a.m. – 5 p.m., except for the City-County Building, Meridian Baptist and the Karns Senior Center.

Then all locations will be open between 8 a.m. – 8 p.m. Oct. 26 – Oct. 29, except for the three listed above. All early voting locations in Knox County are listed below:

Elections officials said they expect early turnout will exceed in-person voting on Election Day, which is Nov. 3. That trend has been growing the past several election cycles.

Voters can use a sample ballot on the Knox County Election Commission’s website to prepare to cast their ballots before heading to the polls.