Mina Mahdavi, a 39-year-old solutions and cybersecurity engineer in California who has not been able to bring her mother from Iran to the U.S. because of the Trump administration’s anti-Muslim travel ban, tried everything she could think of.

She applied for a waiver, called the consulate and her representatives in Congress, all without avail. Her applications were always rejected. Mahdavi was pregnant at the time, and her mother missed the birth of her first grandchild. Mahdavi began to feel hopeless that her mother wouldn’t be there to help her raise her son. She tried her best to forget the idea entirely.

But on Wednesday, for the first time in years, Mahdavi began to reconsider her dreams. Once the ban was lifted, she and her husband broke out jumping and dancing, singing, “It’s gone, it’s gone. Bye, bye, it’s gone,” referring to the ban.

“The weight has been lifted,” Mahdavi told HuffPost. “I can breathe again.”

Families across the globe watched anxiously as newly elected President Joe Biden took the first step in doing away with the policy that separated loved ones for years.

Just hours after his inauguration on Wednesday, Biden signed an executive order that formally revoked former President Donald Trump’s travel ban, which barred entry to the U.S. from several Muslim-majority countries in the Middle East and Africa, including Iran, Somalia, Syria and Yemen.

The consequences of the ban were swift. Immediately after Trump signed it in 2017, it blocked refugees from entering the U.S. and tore families apart. Individuals impacted by the ban, like Mahdavi, said they lived in turmoil, not knowing if they’d ever see their relatives again.

While the new administration still has to deal with the backlog of cases and travel restrictions that are still in place due to the COVID-19 pandemic, immigration advocates and affected Muslim Americans celebrated the revocation of the ban and the possibility of reuniting with their families.

“Today we correct the course of so many disrupted lives, in the U.S. and across the world. Tens of thousands of impacted individuals will now have the chance to be with their families during cherished and challenging times,” said Zahra Billoo, executive director of the Council on American Islamic Relations-San Francisco Bay Area, one of the member organizations of the No Muslim Ban Ever coalition.

“For millions more, the message that Islamophobic immigration policies will not be tolerated will resonate deeply,” Billoo added. “While we know our work is far from over, today we celebrate the heroic efforts undertaken by so many over the last several years in our effort to repeal the Muslim and African Bans.”

Mahdavi is hopeful that in 2021, she’ll be able to reunite with her mother and that her son will have his grandmother by his side.

The Trump administration’s ban was challenged repeatedly for being discriminatory after it went into effect in 2017. Thousands flocked to airports to protest the policy, and advocates and lawyers fought it in courts.

A year later, the Supreme Court ultimately upheld the ban and went on to add a waiver — a legal clause that allowed for exceptions for citizens who were able to prove hardship. But advocates and lawmakers called the waiver a “sham” since it was rarely ever granted.

According to the State Department, only 5% of visa waivers that were applied for were granted between December 2017 (when the third version of the ban went into effect) and March 2019.

Nearly three years passed before two congressional subcommittees held a hearing on the travel ban in September 2019. That hearing highlighted the proposed National Origin-Based Antidiscrimination for Nonimmigrants Act, or No Ban Act ― a bill that would terminate the ban and prohibit any similar laws.

Although the bill passed the Democrat led-House of Representatives in July 2020, it did not get a vote in the then Republican-controlled Senate. While Biden’s executive order has now repealed the ban, Muslim advocacy groups are still pushing for an amended version of the No Ban Act to prevent a future president from issuing a comparable ban.

“We applaud President Biden for upholding this promise and repealing Trump’s bigoted Muslim Ban that ripped us from our loved ones, demonized communities of color, and upended countless lives,” said Jamal Abdi, the action executive director at the National Iranian American Council.

“There is still work to do to implement the ban’s repeal. We were pleased to see new commitments on the ban from the President to ‘restore fairness and remedy the harms caused by the bans, especially for individuals stuck in the waiver process and those who had immigrant visas denied,’ and to review so-called ‘extreme vetting’ practices that risk further discrimination against impacted communities,” the statement continued.

The ban forced American families to make difficult decisions. Some left the country and moved to war-torn countries, while others were forced to spend thousands of dollars to travel back and forth outside the U.S. to spend time with loved ones.

Sarvin Hahghighi, a 41-year-old Iranian national living in the U.S., was visiting her family in Australia when Trump signed the first ban in 2017. Even prior to the ban, Hahghighi’s parents, who were Iranian nationals, faced immense difficulty receiving a visa to the United States. The family decided on Australia, where Hahghighi’s siblings lived, as the country where they could all meet.

A green card-holder at the time, Hahghighi was due to travel back to the U.S., but her lawyer advised her to stay in Australia for a bit longer, not knowing if she’d be allowed to go home.

But the extended vacation wasn’t at all relaxing. For two weeks, Hahghighi didn’t sleep, unsure if and when she’d be able to return to her husband in Chicago. After consulting a lawyer, the couple decided to give it a try. She booked a flight to the U.S. where her husband and lawyer waited anxiously, prepared to fight, in case she was refused entry.

“One second, you go on a trip as a normal person thinking you’re going to come back, and then all of a sudden you’re not allowed. It was just very overwhelming,” said Hahghighi.

Two flights and nearly 30 hours later, she was eventually allowed back into the U.S. Haghighi broke down in tears, relieved. But the ordeal was far from over and the impact of the Muslim ban continued to haunt her.

In 2018, Haghighi, who was an American citizen by then, became pregnant with her son. With the ban still in effect, her family was unable to visit her and help her during her pregnancy. Haghighi, who was unable to have her parents at her side for her wedding, didn’t want them absent for another major milestone in her life. In November 2018, she and her husband decided to temporarily move to Australia to give birth to their first child there, in the presence of her parents.

“When I saw my mom and my dad holding my son, that was it. At that moment, I knew it was all worth it. If I have to do it again, I’ll do it 10 times over,” Hahghighi said.

She eventually moved back to Chicago, and still FaceTimes her parents nearly every day, including on Inauguration Day. She recalled receiving the push alert with the news that Biden had revoked the ban. She and her mother broke down in tears. The fight was finally over.

Hahghighi is hopeful that after years of being apart and traveling thousands of miles to Australia just to meet, that her parents will soon make it to her. More than anything, she wants her mother by her side, especially with her son, who turns two this March, growing up.

“It is so beautiful and it’s just so amazing to see how one signature can make such a big difference,” she said.

Trump Organization’s revenue fell 40 percent in 2020 during the coronavirus pandemic.

Fri Jan 22 , 2021
Donald Trump is now a plain old businessman again and the post-presidential economy he created for himself is not looking so good. The pandemic has put a hurt on the aspects of life that Trump derives cash from, namely hospitality, tourism, and travel. Hotels and clubs, along with urban real […] 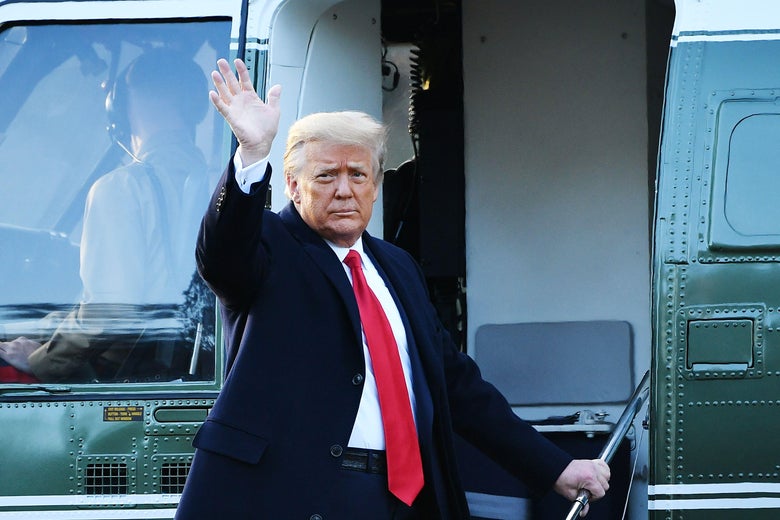