NEW ORLEANS (AP) — Hurricane Zeta slammed into the storm-weary Gulf Coast on Wednesday, pelting the New Orleans metro area with rain and howling winds that ripped apart buildings and knocked out power to thousands before rapidly making its way through Mississippi and Alabama with strong gusty winds, heavy rains and dangerous storm surge.

Zeta weakened to a Category 1 hurricane with winds of 80 mph (128 kph) as it moved into southern Mississippi few hours after landfall, but forecasters said it remained a life-threatening storm. The storm was about 45 miles (72 kilometers) northeast of Hattiesburg early Wednesday. A 91 mph (146 kph) wind gust blew through Mobile, Alabama, Tuesday and a NOAA gauge reported a 10-foot storm surge in Waveland, Mississippi.

Even as Zeta battered the south, the upcoming election was still on the mind of some residents.

“A lot of roads are blocked off right now cause the trees and other debris that have fallen. With the election I just kind of hope the city gets the roads clear by November 3rd so everybody can get out and vote,” said Mackenzie Umanzo, 19. “Hopefully everybody can show up who wants to show up,” the D’Iberville, Mississippi, resident said.

The storm killed at least one person, a 55-year-old man who a Louisiana coroner said was electrocuted by a downed power line in New Orleans, and officials said life-threatening conditions would last into Thursday in a region already pounded by multiple storms this year.

St. Bernard Parish President Guy McInnis said emergency workers were doing their best to respond to reports of people in distress after their roofs were blown off.

“Guys, we received the brunt of Zeta, and Zeta gave us a good punch,” McInnis told WDSU-TV.

Roads were flooded near the coast, where forecasters said Zeta made landfall around Terrebone Bay near Cocodrie, an unincorporated fishing village at the end of a highway with few if any full-time residents and a marine laboratory where a building was inundated.

Streams of rainfall ran off roofs in New Orleans’ famed French Quarter, signs outside bars and restaurants swayed back and forth in the wind and palm trees along Canal Street whipped furiously. Officials said a person was hospitalized with minor injuries after a structure collapsed, but further details weren’t available.

With much of the city in the dark and more than 200 trees reported down, New Orleans Mayor LaToya Cantrell implored residents to stay home and let city officials assess the damage instead of going out and doing it themselves.

More than 875,000 customers were without electricity in Louisiana, Mississippi and Alabama, including about 350,000 in metro New Orleans. Outages were mounting quickly as the storm moved northeastward across the Deep South.

Zeta had top sustained winds of 110 mph (177 kph) as a Category 2 hurricane at landfall and is the 27th named storm of a historically busy Atlantic hurricane season — with over a month left to go. It set a new record as the 11th named storm to make landfall in the continental U.S. in a single season, well beyond the nine storms that hit in 1916.

As much as 5 feet of Gulf water surrounded a casino in Biloxi, Mississippi, and deputies in Harrison County, Mississippi, received multiple calls from people who had remained in mobile homes that were threatened by winds.

Tropical storm warnings were issued as far away as southern Virginia, highly unusual for the region. Forecasters issued a string of tornado warnings for as far east as the Florida Panhandle.

New Orleans was in the warning areas of six previous storms that veered east or west this season. This time, Zeta stayed on course.

Louisiana Gov. John Bel Edwards said in a radio interview that boats broke loose and struck a bridge in Lafitte. He said blackouts were extensive, including 94% without power in Plaquemines Parish.

“The wind has caused extensive structural damages to businesses, to homes, to electrical infrastructure,” Edwards said.

Officials had urged people to take precautions, and a business-as-usual atmosphere in the morning in New Orleans diminished as the storm neared and grew stronger. Traffic slowed, and restaurants and coffee shops shut down.

Winds picked up and water rose above the docks in Jean Lafitte, a small fishing town south of New Orleans that takes its name from a French pirate. Workers drove truckloads of sand to low-lying areas where thousands of sandbags were already stacked for previous storms.

“We’re going to get a lot of water fast,” said the mayor, Tim Kerner Jr.

Zeta’s wind, rain and storm surge reached more than 150 miles (241 kilometers) east of New Orleans. In Mississippi, streetlights swayed in Biloxi and the city of Pass Christian ordered all boats out of the harbor. Dauphin Island, Alabama, shut off water and sewer service in areas that typically are swamped in storms.

New Orleans officials announced that a turbine that generates power to the city’s aging drainage pump system broke down Sunday, with no quick repair in sight. There was enough power to keep the pumps operating if needed, but little excess power to tap if other turbines fail, officials said.

Forecasts called for anywhere from 2 to 6 inches (5 to 15 centimeters) of rain to fall in the New Orleans area.

Before landfall, Zeta’s top winds had risen to just shy of a major, Category 3 storm, according to the U.S. National Hurricane Center.

On Tuesday, Zeta raked across Mexico’s Yucatan Peninsula, toppling trees and briefly cutting power to more than 300,000 people but causing no deaths.

It then regained strength over the Gulf of Mexico along a path slightly to the east of those of Hurricane Laura, which was blamed for at least 27 deaths in Louisiana in August, and Hurricane Delta, which exacerbated Laura’s damage in the same area weeks later.

“I’m physically and mentally tired,” a distraught Yolanda Lockett of Lake Charles, one of about 3,600 evacuees from Laura and Delta still sheltering, said outside her New Orleans hotel.

The deteriorating weather prompted early voting sites to close for hours in the western Florida Panhandle.

Tropical storm warnings were issued for a large swath of the South, from Mississippi into Alabama and Georgia, including all of the Atlanta area, where winds could gust up to 55 mph (89 kph) early Thursday. Winds could be “especially severe” in the southern Appalachian Mountains, where flash flooding is possible, the hurricane center said.

After Hanna, Isaias, Laura, Sally and Delta, Zeta will tie a record set in 1886 and repeated in 1985 for six hurricanes smacking the continental U.S., according to Colorado State University hurricane researcher Phil Klotzbach.

Thu Oct 29 , 2020
THE NEEDIEST CASES FUND As their communities’ needs shifted amid the pandemic, these neighbors offered help. On a blustery day in May, Vanessa Fransen rolled her wagon up to a house in Makoti, N.D. She deposited a bundle on the doormat, rang the doorbell and sprinted away. But this wasn’t […] 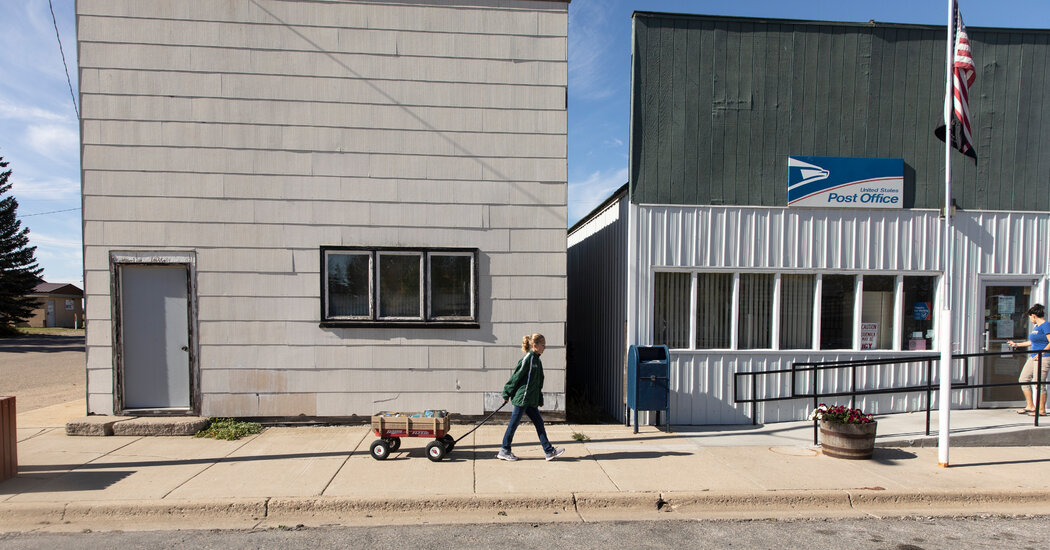