Rowan Blanchard was about six months into her Vancouver-based shoot for Season 2 of TNT’s dystopian thriller “Snowpiercer” when COVID-19 struck North America.

“We were so close to finishing. They had two episodes left on Season 2 and they immediately sent everyone home,” says Rowan’s mother, Elizabeth Blanchard.

The sudden pivot from working nonstop to a complete shutdown of the biz came as somewhat of an emotional shock to Rowan. At 18, the Los Angeles native is a seasoned actor, having landed her big break in “Spy Kids 4-D: All the Time in the World” before going on to star in the Disney small-screen series “Girl Meets World” and Ava DuVernay’s big-screen adaptation of “A Wrinkle in Time.”

“She’s been working since she was 5, so this has been kind of a weird time for her,” says Elizabeth Blanchard. “But now she’s 18, and suddenly she’s an adult. So it’s also been a good time for her to, you know, grow up, to not just work on her acting craft but to pursue other passions. She’s always been an avid reader, so she’s been reading a ton, and she’s taken up baking. She’s got this new apartment in Brooklyn and she’s got things lined up work-wise, but it’s the not knowing when or if they will start that’s stressing her out.”

It’s been a tempestuous and unprecedented period of growth and change — and, in many cases, devastating heartbreak — for those involved with every aspect of the youth biz, from stage moms to managers, producers and the talent themselves.

Variety surveyed performers for our annual Young Hollywood Impact Report and found them coping with the pandemic in a number of ways. Olivia Rodrigo, singer-star of “High School Musical: The Musical: The Series” on Disney Plus, challenged herself to write a song every day, which she did for the first three months of the pandemic, while JoJo Siwa built a stage in her Los Angeles area backyard and streamed concerts on her YouTube channel; she also booked a role on “Bounce,” an upcoming Will Smith production. Still others have pivoted toward voiceover work, or filming projects from home.

The shutdown has been especially discombobulating for young actors that have had breakthrough performances on shows airing during the the pandemic. As it is, there’s still a lot of uncertainty about the future.

Although some productions are beginning to start back up, the surging number of COVID-19 cases around the country makes the entertainment industry outlook especially murky. Even acting studios such as Los Angeles-based Gray Studios, founded by husband-and-wife team Shanelle and David Gray, had to push their popular make-a-movie summer camps to online.

“Pretty much everything has shut down during this pandemic,” says David Eisenberg, manager and co-owner of Protege Entertainment. “Before COVID, most actors were doing 60% of their first auditions via self-tapes. Once the shutdown started, everything became self-tapes only. If casting likes a tape, they scheduled a Zoom callback with the actor.

“The number of auditions has dropped significantly because the shows can no longer cast for co-star or guest star roles,” he continues. “Most of the casting that is occurring is on the pilots halted mid-production. The casting directors are trying to prepare for projects that will film when this pandemic is over, but dates get pushed daily. If the actor books the job, they know upfront that they won’t be working until production starts up again and are basically on hold until they hear that production is ready to begin filming and the safety guidelines are in place.”

Amid all this uncertainty, there has been a vigorous uptick in original creative content stretching across various streaming platforms and beyond.

“It’s been an interesting time to create and grow with new opportunities for young artists,” says Mitchell Gossett, manager and producer of Industry Entertainment Partners. “In some ways, it’s been a great time for the next generation of young leaders in the creative community to step up and come to the fore and be heard. And I’ve been able to focus more on working with my clients on developing ideas and content that reflect and amplify their talents and voices as we witness new leaders emerge.”

One such client, Priah Ferguson, has been “especially creative,” says Gossett. The “Stranger Things” actor has used the coronavirus lockdown to create the newly launched Bold Honey, a social-media platform “that amplifies the voices, narratives and creative merits of young women and girls of color” through culturally and socially relevant storytelling. In the site’s “Honey Drip” section, Ferguson interviews Black industry creatives whose work targets the 12- to 15-year-old female demographic.

“Little Fires Everywhere” star Lexi Underwood has poured her energies into We the Voices of GenZ, an organization she founded to grapple with topical issues including racial inequality. “Our mission is to change the narrative, create awareness, tell our own stories, and inspire others to dream,” says Underwood, who came up with the project two years ago at age 14.

Jamie Pillet, senior agent at A3 Artists, also says many of her actor clients are stretching their wings in new and inventive ways.

“We have Jahi Di’Allo Winston, who was the lead in ‘Charm City Kings,’ which was a hit at Sundance and supposed to come out in theaters in March, now moving toward an HBO Max release, and he’s been writing a pilot and shopping around a book series that we optioned for him — and he’s just 16, which is pretty remarkable,” she says. “We also represent Shahadi Wright Joseph who was in ‘Us,’ and she’s very passionate about the Black Lives Matter movement so we’ve been talking about things we can do online there. And my client Andrew Barth Feldman, who is the youngest actor to play Evan Hansen in ‘Dear Evan Hansen’ on Broadway — he organized an online benefit concert and raised $30,000 in ticket sales to renovate a theater at his school [in Woodmere, N.Y.] in memory of his mother, who passed away last year.”

Pillet says it’s been eye-opening to get to know her clients in a deeper way. “Instead of talking about projects they’re reading and the deals that we’re doing for them, it’s been more about ideas they have,” she says.

But deals are still being inked — and, in many cases, at a robust pace.

“We’ve been really lucky during the pandemic,” says Paradigm agent Ellen Gilbert. “We are getting so many responses and offers for our clients — Sam McCarthy, for example, who stars in ‘Dead to Me,’ has got several film offers on the table. It’s just a matter of figuring out dates and what will work.”

Animation projects, says Gilbert, are also rocketing skyward at full-throttle, with actors able to record from makeshift at-home studios. “A lot of our clients have said, ‘There’s nothing going on, can I do voiceovers? Can I do animation?’”

Michael Cimino, star of “Love, Victor” on Hulu, has been keeping busy doing voiceover work. Still, it’s no substitute for being on-set surrounded by fellow thesps. “I definitely miss acting with a partner,” says Cimino, who also started a project called We the Movement L.A. in the wake of racial protests in Los Angeles. “I miss it a lot.”

“Sydney to the Max” star Ruth Righi, meanwhile, has been able to film a Disney Channel project from home.

Another trend: productions relocating outside the United States.

“They’re changing the locations so [projects] can actually go into production in September or October,” says Paradigm agent Rachel Altman. “We have a series regular on ‘Young Rock,’ which was originally supposed to shoot in L.A., and now they’re going to shoot it in Australia. Filming in Australia, they have such strict quarantine: they’re all going to land, go to a government-issued hotel where they’re quarantining for two weeks. But it’s honestly not that difficult to arrange and make it happen. We have another client who’s up for a series that’s supposed to shoot in Canada and he’s like, ‘Yea, I’m up for Canada!’”

This far along into the pandemic, many performers are ready to resume normal activity.

Relieved to have finished Season 2 of “Dickinson” before production shutdowns, Hailee Steinfeld, star and executive producer of the Apple TV Plus series, has worked on her music, released an album and caught up with family and friends via FaceTime the past few months. She even adopted a dog. But now, the 23-year-old says, she is “getting to that point of really itching to get back on the road and get back to work.”

Likewise, Paul Mescal, the Emmy-nominated star of “Normal People” on BBC and Hulu, confesses he is “climbing the walls” amid the ongoing shutdown. “I am not particularly patient, which is not the best kind of attribute, I think, in a pandemic setting.”

Paula Hendrickson contributed to this report.

'We were stopped from boarding our Greece flight'

Wed Aug 5 , 2020
“After months in lockdown we’ve been so looking forward to a holiday,” says Michelle Last. It’s a longing shared by millions of Britons. But when Michelle and her two young children turned up at the Gatwick Airport boarding gate last weekend for a flight to Greece she was not allowed […] 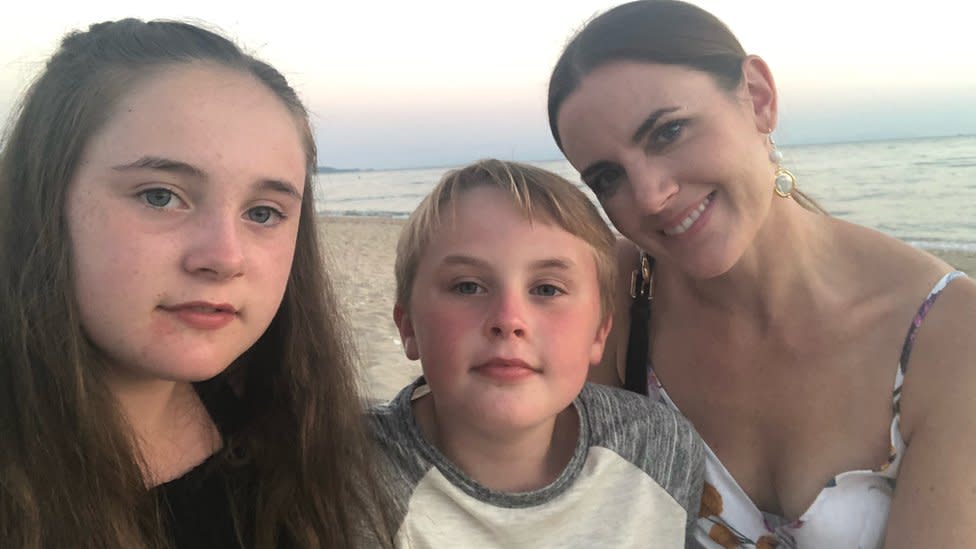