While your travel plans may be on hold, you can pretend you’re somewhere new for the night. Around the World at Home invites you to channel the spirit of a new place each week with recommendations on how to explore the culture, all from the comfort of your home.

Paris is a collective fantasy, from the booksellers along the Seine to the gray zinc rooftops of its cream stone buildings. For ages, the city has been the place to turn for lessons in l’art de vivre, the art of living, influencing fashion, philosophy, culture, art and gastronomy around the world. Today, pop-up shops and hipster brunch spots are as much a part of Paris as street lamps and Gothic architecture. But the romance of the city is timeless.

When visiting, I like to be a flâneur, a stroller with no destination, winding through the medieval streets of the Marais, pausing to hear a jazz band, dipping into the Musée Carnavalet, shopping in SoPi (South Pigalle), popping into Éric Kayser for croissants, sitting in the sun on a green metal chair in the Luxembourg Gardens. Evening might bring a ballet at the Palais Garnier, or a sidewalk bistro table from which to watch the crowds go by.

These days, my apartment is the bistro, boutique and boulangerie. Yet, it turns out, this too has a certain romance. There are countless ways to invite Paris into your home. All you need is a little creativity. And perhaps a glass of Champagne.

Éric Kayser, the artisan baker who opened the first of his shops in Paris, teaches you how to make classic French breads, including “la baguette,” on his lively Maison Kayser Academy YouTube channel. Game for a full meal? Julia Child’s television episodes, including some shows with Jacques Pepin, are on PBS online (you’ll also find her on YouTube). A New York Times Cooking editors’ collection, “French at Home,” tempts with dozens of recipes. And for dessert? Cookbook author and Times columnist Dorie Greenspan said in France “dessert might be cheese, fruit or maybe the sturdy gâteau that almost all French cooks know how to bake: Yogurt Cake. I make it often and always think of Paris and my friends when I do.”

Turn your couch into a box seat at the ballet

Dim the lights and nestle into your sofa like it’s a box at the Palais Garnier to watch ballet and opera clips on the Opéra National de Paris’ YouTube channel. When you need an intermission, do as the audiences do and get a glass of Champagne. The Times’ wine critic, Eric Asimov, offers recommendations online.

Knot a scarf like you were born in Paris

Parisian chic may be as close as your coat closet. “Whatever you do, do not channel ‘Emily in Paris,’ with its kooky combinations of hats, boots and hot pink jackets,” advises Vanessa Friedman, the Times’ chief fashion critic, referring to the Netflix series. “Cast your mind back, rather, to Jean Seberg and ‘Au Bout de Souffle’ in her striped mariniere and capris. To look French, you must not look as if you are trying too hard. On the other hand, you don’t want to look sloppy. That scarf just happened to fall artfully around your neck; that trench simply slings naturally around your shoulders. The word you are going for is insouciance.” Learn to knot scarves like you were born in Paris with this indispensable video from Cosmopolitan France. Naturally, Hermes has pointers too.

Ready to spruce up your home for autumn? Spark ideas with the Instagram accounts of Elle Decoration France, Marie Claire Maison, and Côté Maison, even boutique hotels like Le Narcisse Blanc Hotel & Spa. Elle Decor has some “French Interior Design Rules to Live By” in which the Paris-based designer Jean-Louis Deniot explains: “The whole idea is anti-decor. To make it look like the owner did it himself — to make it look natural. Which is, of course, very French.”

Never mind that your sidewalk doesn’t lead to the Seine. Being a flâneur is not about being in Paris but rather, being of the place you’re in — using your senses to savor sounds, scents and colors right where you are. So tie on a scarf, and go for a socially distanced stroll.

How are you going to channel the spirit of Paris in your home? Share your ideas in the comments.

Stephanie Rosenbloom, the author of “Alone Time: Four Seasons, Four Cities, and the Pleasures of Solitude” (Viking), has been writing travel, business and styles features for The Times for nearly two decades. Twitter: @Stephronyt. Instagram: @StephanieRosenbloom

Why the U.S. Could Be the Big Loser in the Huge RCEP Trade Deal Between China and 14 Other Countries

Tue Nov 17 , 2020
RCEP Representatives of signatory countries are pictured on screen during the signing ceremony for the Regional Comprehensive Economic Partnership (RCEP) trade pact at the ASEAN summit that is being held online in Hanoi on Nov. 15, 2020. Credit – Nhac Nguyne—AFP/Getty Images When 15 nations across the Asia-Pacific region inked […] 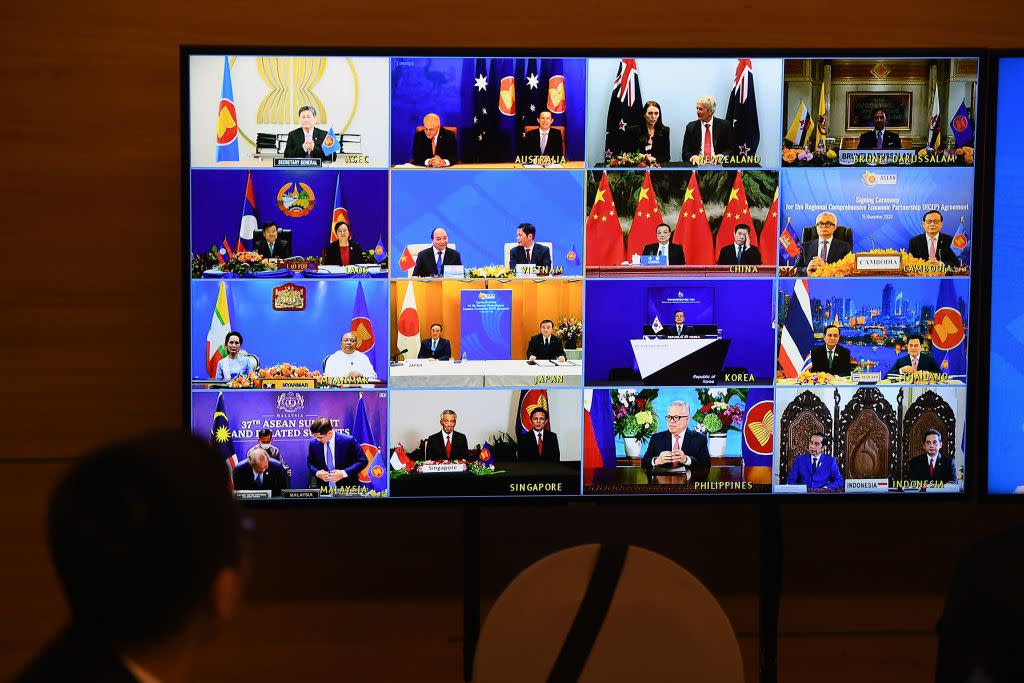