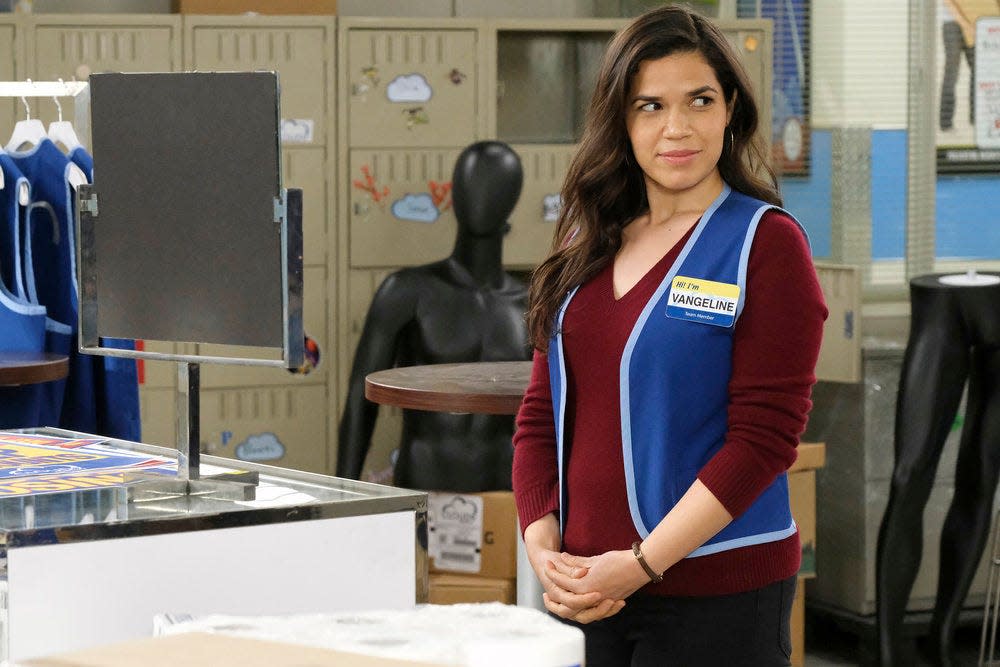 After six seasons, a tornado, a sex tape, a pandemic and many instances of Dina wearing her police officer Halloween costume, “Superstore” came to a close on NBC Thursday with a two-part finale. The episodes wrapped up the Cloud 9 family’s time at the store in true “Superstore” fashion: With slushy vomit, tears from Glenn (Mark McKinney) and a happy ending.

Although “Superstore” had a dedicated fan base for its six-season run, it never quite matched the success or acclaim of tonally similar NBC sitcoms like “Parks and Recreation or “Community.” Less flashy than its contemporaries, “Superstore” thrived by choosing as protagonists people often ignored by Hollywood, a group of working-class, mostly people of color in the middle of the country. Its ambitions were high, its antics were giddy and absurd, and it ably weathered the departure of its biggest star, America Ferrera, at the start of this final season.

When “Superstore” returned last October, it was one of the many network TV series to incorporate the COVID-19 pandemic into its storylines, and one of the very few to do so successfully, by finding humor in our global tragedy.

Although it ended on a sweet, satisfying note, “Superstore” always felt like the kind of series that could have run for 10 seasons. But the six we had were pretty wonderful.

How it all ended

After last week’s visit from the son of Cloud 9’s founder, Cheyenne (Nichole Sakura) correctly surmised that corporate parent Zephra was planning to close the majority of the big-box stores. She called Amy (Ferrera) – who had been promoted to a corporate job in California – for help, and Amy flew back to St. Louis to try to save the store, which meant seeing her ex, Jonah (Ben Feldman), for the first time in months.

Initially, the employees think they can make their Cloud 9 location one of the 5% of stores Zephra plans to spare by making it “the perfect store” when an evaluator visits. Cheyenne gets attractive friends to be the greeters, they clean up the usual messes and hope for the best.

But the perfect store operation hits a snag when Justine (Kelly Schumann) finds a bag of severed feet in the bedding section (a not unusual occurrence). Jonah, Amy, Dina (Lauren Ash), Glenn and Cheyenne try to hide them until the evaluator leaves, surrounding them with a big display of La Croix seltzer boxes. It doesn’t work for long, as Marcus (Jon Barinholtz) quickly sees the feet and (understandably) starts screaming.

After the police arrive and Jonah makes an impassioned defense of the store on the local news – when the reporter would really rather he say something salacious about all the severed feet that have surfaced there over the years – Amy confronts the Zephra evaluator and begs her to keep the store open. The evaluator says yes, of course the store is staying open, but as a fulfillment center. The company is moving the business entirely online, and only some of the employees will keep their jobs. Amy is so disgusted that she quits.

There’s no crazy last-minute scheme to save the store, only liquidation signs and almost-empty shelves. Amy visits to say goodbye to everyone, Glenn quickly enlists her help on the floor and she puts on the blue Cloud 9 vest one more time. The mood in the store is low. Dina was offered a job managing the fulfillment center, but she can only bring five employees with her, and she has a hard time choosing. Mateo (Nico Santos) is terrified at the prospect of finding another job as an undocumented immigrant. Garrett (Colton Dunn) does his best to act like 20 years of working at the store meant nothing to him. Glenn is facing an unplanned retirement with no purpose (and annoying Mateo as he sulks).

Amy finds Jonah and tries to tell him she made a mistake when they broke up before she moved to California. But Jonah is reluctant to open his heart to her again. He’s glad she’s figured out what she wants, but he hasn’t figured out what he wants.

Glenn finds old tapes of the interviews he did with the employees (secretly recording them was a totally normal thing) and we get to see a teen Amy, Garrett with hair, Dina before she hated Glenn and Jonah, pompous and arrogant but still warm-hearted. Amy asks Jonah why he stayed at Cloud 9 so long. It was for her, obviously, he says. And in the middle of saying she’ll wait for him just like he waited for her, Jonah kisses her. And all is right in the Cloud 9 universe again.

As Garrett makes his final announcements to the straggling shoppers, he tries to be flippant as he signs off. But in the last moments, he can’t be, and he gives a sweet, impassioned speech about what the store – and more importantly, the people who work there – have meant to him. The episode flashes back to big moments over the course of the series, and then forward to everyone’s post-Cloud 9 lives: Glenn opened a hardware store and hired Mateo and Cheyenne; Dina took Sandra (Kaliko Kauahi), Marcus and Justine with her to the fulfillment center; and Amy and Jonah finally got married.

And then, back in the present, the store closes.

We probably won’t miss the store, but we’ll miss its employees dearly.

More: How COVID-19 changed how TV was made, and what we watched