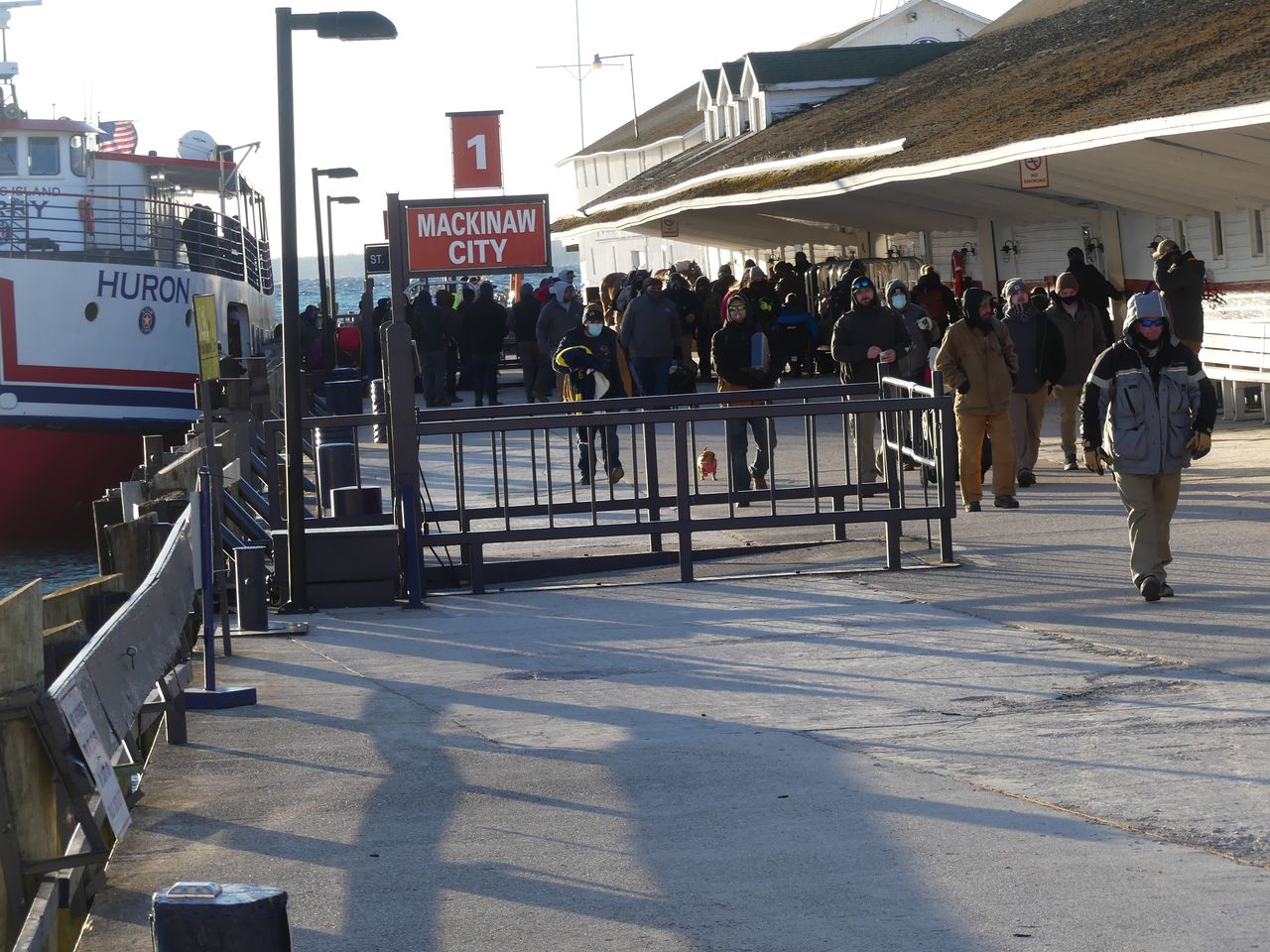 MACKINAC ISLAND, MI – People who have spent time on Mackinac Island in the winter and early spring can attest to how peaceful it is – a 180-degree turn from the teeming in-season tourist crowds on Main Street.

But at the beginning of each week in the off-season, there is a sudden surge in the island’s population: These visitors are layered up in sturdy jackets and hats. They’re hauling supplies and carrying tools. Meet the “Carhartt Army,” nicknamed after the well-known Michigan brand of work clothes so many of them wear.

The hundreds of workers who do construction, renovation projects, off-season maintenance and other needed work typically stay on the island during the week in the winter months, then head back to the mainland each weekend. It’s all this work done largely behind the scenes that makes the island ready to greet visitors again each spring, resort and tourism officials say.

Most Monday mornings, the Carhartt Army can be found in one place – motoring across the Straits of Mackinac aboard the “Mighty Huron,” the Star Line Ferry boat that handles the winter traffic to and from the island.

“Monday mornings, typically we get a pretty good influx of workers,” said Jerry Fetty, Star Line’s CEO. Some first boat trips of the day can carry 120 to 200 workers, depending on what projects are being done in the off-season. Once the Huron arrives and is tied up at the dock, the workers stream off, breaking into smaller groups and fanning out across the island’s downtown or heading to its larger resorts to resume their work. Some walk and pull carts loaded with tools and equipment. Others catch a horse-drawn wagon with their supplies. Depending on the weather, some may pedal away on a bike or hop on a snowmobile that’s hauling a trailer.

At the end of the week, the Carhartt Army members find their way back to the dock for the trip to St. Ignace, the Star Line port it uses for its winter routes.

“Most stay over a week, then they all come off on Friday evening – the last boat on Friday,” Fetty said.

For some people, a work routine that involves a ferry boat and maybe a horse-drawn taxi might sound odd. But for islanders, the Carhartt Army’s presence signals work getting done.

Some of the island’s properties are tackling big projects this off-season, including Grand Hotel. The popular resort is doing extensive renovations on its Esther Williams swimming pool area, and has more projects underway inside the hotel. Much of that is reliant upon its off-season workers.

“The construction and engineering team at Grand Hotel play an integral role in preparing the hotel during the off-season,” said Doug Dean, executive vice president of operations.

“From the moment the closing bell rings, they begin work to ensure all property updates are completed ahead of the reopening. Even through this unpredictable Michigan winter, they have done a tremendous job of remaining on track with the Esther Williams Swimming Pool renovation project. We can’t wait to welcome guests and unveil this updated experience in a few months.”

All Aboard the Mighty Huron

Most of the Carhartt Army’s trips to and from the island take place aboard the Huron, Star Line’s 150-ton cold-weather workhorse. Its winter season started on Nov. 1.

Built in 1955 and stretching 86 feet long, this steel-hulled ferry is built to handle winter in the Straits. There were only a few weeks this year when the Huron was sidelined by thick ice, and passengers had to find other modes of transport on and off the island. Small planes are one option. But in winters like this one, when a deep-freeze creates a temporary ice bridge between the island and the mainland, workers can sometimes take a snowmobile to and from Mackinac Island, Fetty said.

Once ice conditions had thinned enough earlier this month to put the Huron back in service, Fetty said it was great to watch the tough ferry do what it was built for: break a path to the island. “These guys are experts at reading the ice,” he said of his Star Line employees. On the first trip out after the deep-freeze, the Huron’s team was nudging the ferry through a field of strong “blue ice” that was over a foot thick. “The Huron handled it, no problem,” Fetty said, a touch of pride in his voice. “That boat was really built with the job that she does in mind.”

Because Mother Nature is so fickle – and weather near Mackinac Island can change in a snap – Fetty’s crew stays on top of conditions so they can alert passengers who depend on the ferry schedule to any last-minute changes. Star Line offers a texting service so passengers can get instant updates.

Fetty said his team is very proud to be the ones to carry the Carhartt Army and other winter passengers to and from the island. “We take it very seriously. In the springtime, we are out there every day, checking the ice toward shore and in the bay.”

As spring approaches, Star Line will add more trips-per-day to the schedule until the calendar hits April 21. That’s when the early summer season officially begins. Star Line will start running ferry boats to the island from both its St. Ignace and Mackinaw City docks, and the company’s fleet of hydrojet ferries will return to the water.

When the switch to the summer fleet happens, the Huron will be ready for her off-season. The older ferry will be pulled from the lake and given a dryland berth at the company’s Mackinac Marine Services in St. Ignace. The Huron is slated for some work this summer, including a new engine and maybe a new boiler. After a winter carrying the Carhartt Army, she’ll have earned her rest.