For some people, finishing work for good is an appealing idea, with the prospect of travel, spending time with family and enjoying hobbies. But retiring during a pandemic is a different matter entirely.

Travel isn’t currently an option, and for months Britons have been restricted in what they can do and who they can meet. And aside from being physically prevented from fulfilling their dreams, for many on the verge of retirement, Covid-19 has had a financial impact, too.

In 2021 about 680,000 Britons will reach state pension age, according to the Office for National Statistics, but the coronavirus means many are having to think again about when, or even if, they can stop work.

Emily Andrews, the senior evidence manager at the charity the Centre for Ageing Better, says older workers are being forced to “rethink their retirement plans altogether”.

“Many are losing their jobs at a crucial life stage and may struggle to return to work,” she says. “Some are bringing forward retirement because they can’t find work, or delaying it because their ability to save has been compromised by the crisis.”

Research by the Interactive Investor website indicates one in five people aged 60-65 believe they will need to delay retirement. Its Great British Retirement Survey of 12,000 adults also revealed about one in four feared they would never be able to retire.

Among people at retirement age are thousands of furloughed workers: more than 1.28 million over-50s were being paid through the government scheme at the end of January, of which 181,600 were over 65.

While some businesses have topped up earnings, many employees have been getting 80% of their normal pay, and their pension contributions may have been reduced as a result.

“We are seeing people putting retirement savings on hold in response to the pressures of the pandemic, including reduced income on furlough,” says Emma Byron, the managing director of Legal & General Retirement Solutions.

Alongside people on reduced incomes are those who have lost their jobs. The number of people aged 50 and over who were unemployed for more than 12 months was 124,000 in the three months to November 2020.

According to analysis by Rest Less, a jobs site for older people, unemployment levels among those aged 50-64 increased by 55% in the last three months of 2020 compared with the same period the previous year.

Calls are growing for the government to tackle the impact of the pandemic on older workers. Caroline Abrahams, the charity director for Age UK, says the government needs to do more to help them back into employment after redundancy, “such as by extending the Kickstart scheme so they can take advantage of it, too”.

At present, the £2bn Kickstart scheme funds job placements for young people claiming universal credit. Employers cannot claim it to help over-50s despite them being more likely to lose their jobs.

Stuart Lewis, a general manager at Rest Less, says: “The recruitment process is where age discrimination bites hardest, and the amount of people out of work during the pandemic has made this worse.”

Abrahams says: “As ever, it’s those in the lowest-paid jobs, with few assets to fall back on, for whom the transition to retirement is now likely to be especially hard.”

As well as having less to put into a pension, some nearing retirement may have started to use their funds earlier than they had anticipated.

Helen Morrissey, a pension specialist at Royal London, says over 55s who are able to access their pension “could dip into it to supplement their income … This will affect the size of their pension and could mean they have to revise plans or delay retirement.”

Meagre state pension provision is already resulting in many being forced to work beyond state retirement age, which rose to 66 for men and women in October 2020. The full state pension amounts to £9,100 a year, based on a worker’s national insurance contributions record.

Becky O’Connor, the head of pensions and savings at Interactive Investor, says: “Increases to the state pension age are saving the government money but the personal cost of these rises can be significant to those due to retire.”

A spokesperson for the Department for Work and Pensions says: “Older workers are a huge asset to this country and we have dedicated support to help them back into work through our Plan for Jobs and our 50 Plus: Choices offer.

“Our older worker champions are specialists at supporting this experienced group to find new opportunities, including retraining on our sector-based work academy programme, and we are launching a series of mentoring circles that will help boost their network, job search skills and confidence.”

‘The future feels very daunting for my age group’

Marsha Vaknine, 65, has given up hope of retiring for now. She was furloughed on full pay in March 2020 before moving to 80% of salary in September. She is now back at work as a PA to the chairman of a property firm four days a week.

“I don’t know if my job will be sustainable,” says Vaknine, from Edgware, north London. “But I can’t possibly afford to retire and I’ve had to cash in a few smaller workplace pensions when it was getting difficult.” She still has a small private pension but has stopped paying into it.

She will receive her full state pension of £175.20 a week from June.

“I don’t want to look for a new role because of my age. If needs be, I’ll have to, though – we wouldn’t be able to survive. My husband has a very small pension,” she says.

“Saving is pretty hard at the moment and the future feels very daunting for my age group. I’ve no plans for retirement – I’ll carry on until they carry me out.”

John Lovell, 66, has delayed his retirement after “everything went wrong”. He was due to retire in October 2020 but was forced to change his plans.

He is aiming for a total retirement income of about £40,000 a year from his self-invested personal pension with AJ Bell Youinvest, and a few company pension schemes.

“The market crash last year had a massive impact on my pension,” says Lovell, who works as a sales manager for a software company. “I need to wait for it to recover.”

The pandemic has meant he no longer has to travel so much as part of his job. “At least this made delaying retirement a bit easier,” he says.

“I’ll hopefully retire next year – and want to travel from Moscow to Beijing on the train, stopping off in Mongolia. I’d rather retire with less then than carry on to get more – you could die a week after you retire. You just don’t know.”

‘The pandemic put paid to cycling across Europe’

Bob Jones, 68, had plans to cycle across Europe to kick off his retirement in January 2020. “I’m a cycling enthusiast and wanted to see 11 countries in Europe on a six-week trip,” he says. “But the pandemic put paid to this, and retirement, so I started another business instead.”

He spent the first lockdown completing six online courses to brush up on his marketing skills, before founding Originality, a marketing consultancy for electronic component companies. Some cash that was to be put towards retirement has been used to support his new venture. “We’re blessed not to have to worry about immediate earnings now,” he says.

He hopes to plan a big cycling adventure for 2022 with his wife and twin 18-year-old son and daughter, travelling from Melbourne to Sydney and across New Zealand. “It was disappointing that I couldn’t do the original trip but compared with the suffering going on, I’ve accepted the reality of the situation,” he says.

How to boost your pension

The Department for Work and Pensions estimates that there could be 1.6m lost pension pots, containing a total of £19.4bn. The government offers a scheme to track down lost pensions at gov.uk/find-pension-contact-details.

You can increase how much you are entitled to by delaying claiming your pension. For every nine weeks you wait, your pension rises by 1% and you receive the extra payment for life. If you delay for a year, you will get an extra £10.16 a week at the current pension rate.

Make use of pension freedoms

From the age of 55 you can do what you want with your retirement savings: you can draw an income, buy an annuity, take a cash lump sum or a combination of these options. Making the best use of a mixed approach to your retirement income could boost your income, and an adviser can help with this.

According to the consumer group Which?, the difference between the cheapest and most expensive plan for drawing income from a £250,000 pension is £12,300 in charges over a 20-year period. Make sure you check fees before signing up to anything.

If you are considering delaying your retirement, tell your workplace pension provider in plenty of time. “This will prevent your pension moving into lower-risk assets such as bonds too early, and missing out on further opportunities for growth,” says Maike Currie, an investment director at Fidelity International.

There are plenty of free resources out there that can help you plan for retirement. For example, Legal & General has developed a free course with the Open University, Retirement Planning Made Easy. To understand how much you need to retire, use one of the many online calculators, such as Fidelity’s comprehensive My Plan.

You can speak to the government-backed free guidance service Pension Wise about any concerns. You can find out what you are on track to receive from the state pension, and when it will be paid, by using the government’s online forecast tool at gov.uk/check-state-pension.

It's Mar10 Day! To celebrate, Walmart's having a massive sale on Nintendo Switch games

Sun Mar 14 , 2021
Yahoo Life is committed to finding you the best products at the best prices. We may receive a share from purchases made via links on this page. Pricing and availability are subject to change. It’s Mar10 Day! Walmart’s having a massive sale on Nintendo Switch games. (Photo: Walmart) It’s Mar10 […] 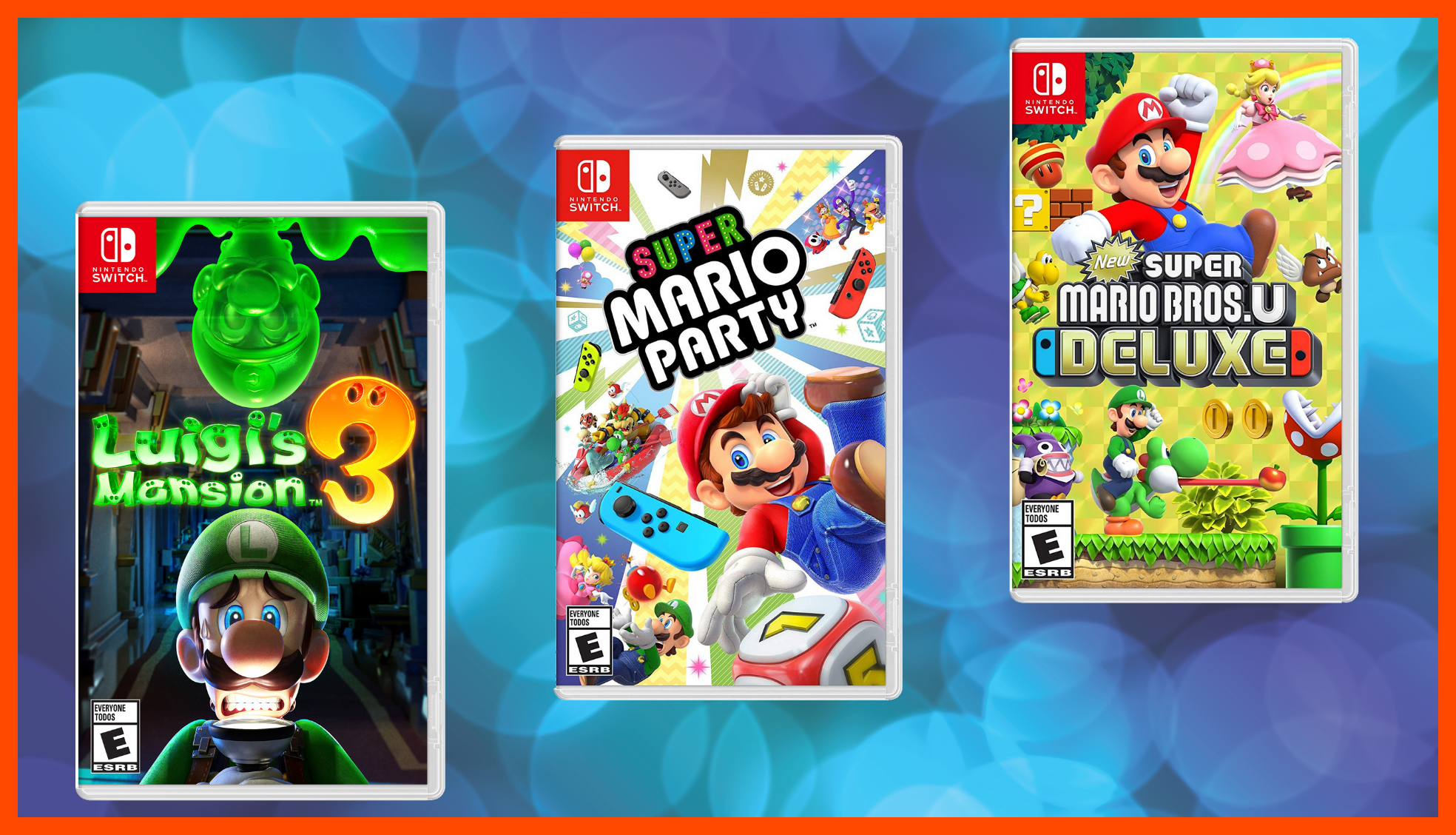