When the CEOs of the nation’s four biggest tech firms appear before lawmakers on Wednesday to defend their business practices, the fallout is likely to stretch well beyond Silicon Valley. In fact, it may affect your digital future.

Amazon’s Jeff Bezos, Apple’s Tim Cook, Facebook’s Mark Zuckerberg, and Google’s Sundar Pichai will field questions raised by a yearlong federal investigation into the tech industry, testifying under oath about decisions that affect consumer choice. The hearing was organized by the antitrust subcommittee of the House Judiciary Committee.

Based on their answers, regulators will determine whether perhaps the companies have stifled innovation and impeded competition in online marketplaces, app stores, social media platforms, and search results.

“We’ll learn something by what they tell us or what they refuse to tell us,” says Jonathan Schwantes, senior policy counsel at Consumer Reports.

Lawmakers will have access to more than a million pages of documents collected during the investigation, says Michael Kades, director of markets and competition policy for the Washington Center for Equitable Growth, a nonprofit organization. “So they’ll have a sense of whether the CEOs’ public statements are honest.”

The Department of Justice, Federal Trade Commission, and state attorneys general have launched investigations of their own into Big Tech companies.

Consumer Reports contacted the four companies involved in the congressional hearing to request on-the-record interviews, and all four declined or failed to reply.

The hearing begins at noon EST on Wednesday. A report with the subcommittee’s findings is expected to be delivered this fall.

Experts foresee two potential outcomes from these proceedings. The subcommittee’s findings could lead to an antitrust enforcement action against one or more of the companies. That might result in demands for changes to their business models or maybe even a forced breakup in which, for example, Google might have to spin off YouTube.

“Antitrust cases are hard to win,” says Kades, adding that the process is likely to play out differently for each of the four companies.

The other option is legislation designed to rein in the companies, strengthening antitrust statutes, creating a new agency, or expanding the scope of, say, the FTC to more closely monitor the tech industry.

What will legislators—and consumers—want to hear about from each CEO on Wednesday? Here’s a platform-by-platform breakdown of the most important antitrust issues facing Big Tech.

The big issue: With Amazon, the questioning is likely to center around the practice of selling its own products in in the marketplace it created.

Amazon collects a wealth of data on not only the products sold by third-party vendors but also the things consumers are searching for. Collectively, that information could help Amazon anticipate trends in a way that benefits its rapidly expanding private label business.

In an earlier hearing, an Amazon representative told the committee the company doesn’t use data in this way. But a subsequent Wall Street Journal report revealed that Amazon’s programming algorithms boost the company’s own products, making it much more likely for consumers to see them.

Amazon sells more than 7,200 products under 140 private labels. Some, such as AmazonBasics, are easily identifiable; others, like Moon and Back baby clothing, Revly vitamins, and Obsidian sunglasses, are less obvious. According to projections by SunTrust bank, Amazon’s private label business could reach $25 billion annually by 2022, potentially making up 10 percent of the company’s bottom line.

Why you should care: According to Kades of Equitable Growth, Amazon’s unique and powerful position in the marketplace does benefit consumers at times, but it may do more harm in the long run.

Most of the company’s private label clothing and household goods are inexpensive, selling for $50 or less. But over time, Amazon’s behavior could suppress competition and innovation, persuading smaller companies not to launch products that Amazon could knock off.

Alex Harman, competition policy advocate for the group Public Citizen, says that if the subcommittee takes Amazon to task for creating a platform and then selling its own products on it, it could have ripple effects for the other three tech giants because they engage in similar practices to varying degrees.

“All these companies would have to change their business models,” he says.

The big issue: Apple’s App Store is the central marketplace for consumers to download apps on iPhones, iPads, and Mac computers. To sell a product in the store, an app developer must follow provisions that, some experts say, restrict competition.

For example, Apple charges a commission of up to 30 percent on third-party apps. The company has also mandated that app developers use in-app purchases as the only way to unlock new features or functionality, which allows Apple to collect fees on the transaction.

Why you should care: Some competitors argue that Apple’s practices have resulted in higher prices and less choice for consumers. The music streaming platform Spotify has complained to European antitrust regulators that App Store fees constitute a “tax,” which Spotify had to pass on to users by raising its monthly fee.

Spotify added that some companies, like Uber, which don’t compete with Apple, don’t have to pay a fee to Apple when processing charges through the company’s platform.

“When you treat the companies that you compete with worse than those you don’t compete with, it rubs people the wrong way,” Kades says.

(In advance of the hearings, Apple pointed to a report by economists that contends the App Store’s fee structure is similar to that of other platforms, such as the Google Play store.)

The big issue: While Facebook faces a variety of complex antitrust issues, the key issue, and the easiest to understand, is that the company bought Instagram and WhatsApp when they emerged as potential rivals.

“There’s a huge focus on whether these acquisitions were anti-competitive,” Kades says.

Some antitrust experts have called for unwinding those mergers, but that’s not as easy as it sounds, given the way Facebook has integrated the companies in its business model.

“There’s a saying in antitrust, ‘You can’t unscramble the eggs,” says George Slover, antitrust expert and senior policy counsel for Consumer Reports. “That’s why you need to nip these anti-competitive mergers in the bud.”

Why you should care: While antitrust cases often focus on price increases in a competition-free market, the issue with Facebook is the way that consumers pay for free use of platform.

“The real cost of Facebook is the data they’re collecting from you,” says Charlotte Slaiman, competition policy director at Public Knowledge, a public interest group focusing on technology and based in Washington, D.C.

Facebook uses consumer data from its platform, Instagram, WhatsApp, and outside sources to target ads to customers.

The only way to fully opt out of the data collection is to not use Facebook’s services, cutting yourself off from access to friends, business associates, and members of your local community.

Last month, a high court in Germany ruled that Facebook’s collection and use of consumer data violated the country’s antitrust laws.

The big issue: Under the umbrella of parent company Alphabet, Google is involved in a dizzying array of ventures, but the one that’s likely to draw the most questions is Google’s dominant position in the advertising business.

That one has far-reaching impacts on customer search, smartphone use, and Google’s suite of office productivity products.

In 2019, 82 percent of Google’s $160 billion in revenue came from advertising. And, as Kades says, Google’s ad-serving tools—Ad Exchange and Ad Manager—give the company a hand in buying and selling ad space across the internet.

“Google is on both sides of the transaction,” he says. “We have rules on stock exchanges against this type of conduct.”

Google also insists that companies use its tools to buy and sell ads on YouTube, which effectively shuts out potential competitors.

“A demand-side platform, which advertisers use to buy ad space, will have difficulty appealing to clients who want to advertise on video if that rival platform doesn’t have access to YouTube,” Kades says.

Why you should care: Google rivals such as Yelp argue that anti-competitive practices in the ad business hurt consumers.

For example, when you search for hotel rooms in New York City, Kades says, the results page is dominated by paid ads from companies like Booking.com, Priceline, and Tripadvisor. The top organic results (which are not paid for) feature those same companies. That means that out-of-the-way boutique hotels and other alternatives get buried.

“On a mobile device I see the same content for pages and pages,” Kades says. “The prominence of promoted results can reduce the quality of the search engine because it can make it harder for users to find what they want.”

Google has cemented the dominance of its search engine on mobile devices by paying Apple more than $7 billion annually to be the default search engine on iOS devices, Bernstein analyst Toni Sacconaghi said in a Barron’s interview. It’s estimated that Google takes in about $25 billion per year in ad revenue from searches on iPhones, iPads, and Macs.

Consumer Reports is an independent, nonprofit organization that works side by side with consumers to create a fairer, safer, and healthier world. CR does not endorse products or services, and does not accept advertising. Copyright © 2020, Consumer Reports, Inc.

Wed Jul 29 , 2020
LOS ANGELES — Passengers flying Virgin Galactic on suborbital trips into space will be able to see themselves floating weightless against the backdrop of the Earth below while 16 cameras document the adventures, the company said Tuesday. Highly detailed amenities to enhance the customer flight experience were shown in an […] 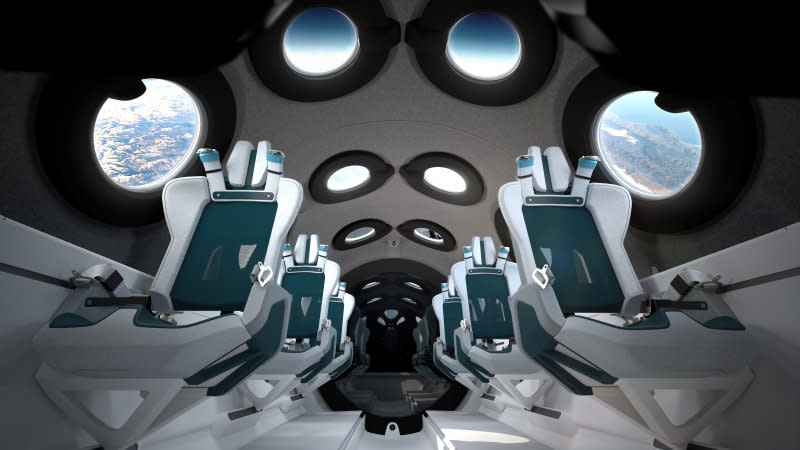