When Larry Heine was a working man he drove a truck eight hours a day. He saw his family every night, owned his home, sent both his kids to college, and took his wife on vacation to Hawaii whenever he could land some overtime.

As a member of the Teamsters, Heine was guaranteed good health care and a pension. He retired at 51, receiving a cake and a $250 gift card to a fishing store on his last day.

In 2020, truck drivers work a median of 60 hours a week, according to a 2010 study by the National Institute for Occupational Safety and Health. One in five reported logging more than 75 hours.

At the same time, their pay has sunk. In the late 1970s, driver salaries were up to 50% higher than they are today, even when accounting for inflation, according to Wayne State University economics professor Michael Belzer.

In the US, the median salary for the 1.9 million truck drivers stands at $45,260. Nearly 40% lack health-insurance coverage, compared to 17% of the working population.

From his home in Northern California — which he built after he retired — Heine told Business Insider he was shocked at those changes.

“They’ve depressed the market so bad,” Heine said. “You can’t make a living on that. Give me a break.”

To Heine, truck driving was a “standard blue-collar job.”

To today’s drivers, his was a good life in a golden age — an age that many say ended on July 1, 1980, when President Jimmy Carter put his name to the Motor Carrier Act of 1980, the law that deregulated the trucking industry.

Starting in 1935, the federal government set the price to move a good from one city to another. Trucking companies had to apply for the right to carry a certain good, which made it challenging for folks like Heine to even become a truck driver.

The 1980 MCA broke up that system, allowing anyone to haul any good, to any place, for any price they liked.

In signing the bill, Carter said he hoped it would stymie “excessive and inflationary Government restrictions and redtape.” The goal was to slash the price of goods by forcing truckers to compete with one another on the price of transportation. It would save consumers as much as $8 billion — $25 billion in 2020 dollars — each year, Carter said. And he was right. But another of his claims — “All the citizens of our Nation will benefit from this legislation” — lies on shakier ground.

The biggest winners of the 1980 MCA, though, didn’t earn a mention in Carter’s signing statement, perhaps because neither the president nor anyone else saw them coming. They were the national and international retail chains that have surged to market dominance in recent decades.

Experts say that today’s big-box and online retailers wouldn’t exist if the government had not given up its ability to control freight prices. No Walmart. No Home Depot. No Amazon. And certainly no Amazon Prime.

Deregulating trucking created significant cost savings for America’s emerging class of retail mega-chains. Truckload shipment rates fell by 25%, adjusted for inflation, from 1977 to 1982. Logistics — half of which are trucking costs — used to account for 16% of the US’s annual expenditure. Even though we’re shipping more goods than ever, it’s now under 8%.

Today, America’s most successful retailers wield transportation as a weapon. It’s why Jeff Bezos opened Amazon’s first fulfillment center five years after he founded the website and why Sam Walton used to drop by his Walmart drivers’ break rooms bearing boxes of donuts to hear their thoughts about the business.

If deregulation hadn’t enabled these retailers to so ruthlessly rationalize their supply chains, Americans would certainly have access to fewer goods — and those goods would be more expensive.

Those benefits were not free.

“A low price has unintended costs that are not shown to customers,” Shane Hamilton, a senior management lecturer at the University of York, said. “A low price includes hidden costs that someone other than those customers or the retailers have to pay.”

‘Destructive competition’ in the trucking industry

That’s the sound a semi made in the 1950s when it shifted gears, before mufflers and automatic transmissions were common features.

At 6 years old, Heine heard it from the back seat of the family car on a road trip. They had stopped at a truck depot in Bakersfield, California, on their way to San Diego. The sound set Heine on his career path.

“It set this real manic thing in my brain off — don’t ask me why,” he said. “I fell in love with the noise and the sound and the mystery of people disappearing into the night time. Where are they going?”

After graduating from high school, Heine started to work his way up in the trucking industry, going from school-bus driver to cement hauler to local truck driver for Consolidated Freightways, then the titan of the trucking world.

In 2002, a year after Heine retired, Consolidated Freightways went bankrupt, as did every trucking giant of the 20th century that couldn’t compete in a deregulated industry.

Most failed to last anywhere near that long. In the three years following deregulation, 72 freight haulers shut down. Those companies together generated 16% of the entire industry’s revenue. By 1986, some 4,000 trucking companies had shuttered.

Tiny upstarts took their place. From 1980 to ’90, the number of trucking companies doubled.

That slammed drivers’ wages, as trucking companies were forced to begin slashing payrolls to keep up with new industry entrants. A Business Insider analysis showed that median wages for truck drivers have decreased 21% since 1980. In some urban areas, they’ve declined by as much as half.

The trucking industry is the rare area in the American business landscape where just about anyone can become a business owner.

“You or I can get into the trucking industry tomorrow if we had a friend tendering us freight from whatever city to whatever city,” Kent, the supply-chain expert, said. “We could go to the bank, get money, and we’re in business. “

That ease of entry meant everything to people like Franklin Morales, who runs an 85-truck fleet in Newark, New Jersey.

“We came here with the American dream,” Morales, who was born in the Dominican Republic, told Business Insider. And he made good on it.

Today, there are nearly 207,000 trucking companies in the US, nearly 90% of which run six trucks or fewer. It’s a rare example of what economists call “perfect competition,” Kent said.

The industry has so many suppliers (those 207,000 trucking companies) and so many buyers (every retailer and manufacturer) that the price of most goods escape anyone’s control and, inevitably, plummets.

But that so-called perfect competition has rendered most truck drivers worse off, as University of Pennsylvania sociologist Steve Viscelli wrote in “The Big Rig: Trucking and the Decline of the American Dream.”

Viscelli calls the result “destructive competition — competition so severe that it undermines profitability to the point that it causes underinvestment by firms, industry-wide inefficiency, market instability, and poor service quality.”

Why deregulation was a boon for (some) retailers

It’s easy to forget that it hasn’t always been possible to get any imaginable product at any location, like $20 packs of 50 clothing hangers, tangerines in South Dakota in January, sheet masks from South Korea at a Miami Sephora.

But before trucking deregulation in 1980, and the accompanying globalization of supply chains, getting such goods on the shelves would have been a struggle for a national retailer.

That’s why the now bankrupt mega-retailer Sears stationed its distribution centers near America’s railways during its peak in the mid-20th century, Viscelli told Business Insider. The Sears catalog, which first arrived in American mailboxes in 1893, contained hundreds of pages of products that took weeks to get to a customer’s doorstep. Rail was slow, but moving a wide variety of goods by truck was too complicated to be workable.

A trucking company had to apply for the right to move a certain good from one city to another. If that set-up stuck around today, it would render, say, Amazon’s strategy of moving thousands of different types of parcels by truck across the country impossible.

When Carter signed deregulation into law, Walmart in particular had a chance to expand its retail network. The company’s network design involved placing distribution centers and stores within a one-day, round-trip drive of each other.

Truck drivers for Walmart have always been among the best-treated in America. Today, their starting salary is pegged  at about $87,500.

Spurred by this new opportunity in supply-chain design, Walmart grew far beyond its original business model, offering rural Americans low-cost goods. It went from one-fifth the size of Sears to twice as large.

Local truck drivers have largely been replaced by drivers traversing the US with 53-foot trailers full of goods for manufacturers or distribution centers.

“The vast majority [of truck drivers] are going to a big-box retailer with a big truck — and that big truck has a nonunion driver,” Kent said.

Everything’s cheaper, but the cost is immense

Larry Heine doesn’t think the cost savings were worth it.

“There was this shift in power for laborers,” he said. “Deregulation got a hold of the nation to drive down the cost of everything. The cost didn’t go down much — the money just shifted from labor to the top 10%.”

“This was a conscious decision to make the trucking industry a dog-eat-dog industry,” Mishel, a fellow at the Economic Policy Institute, previously told Business Insider. “The prices of trucking got cheaper, but the ability to make a living evaporated.”

The data supports Heine’s and Mishel’s arguments. Between 2000 and 2018, the lowest-earning one-tenth of Americans saw their wages rise by 3%, the Pew Research Center found. The wealthiest one-tenth enjoyed a 15.7% surge.

Housing and healthcare costs have consistently outpaced wage growth. What Americans need to live has gotten costlier, but mass-produced goodies — the TVs, clothes, and toys made overseas and moved around the US on a truck — are cheaper than ever.

It’s part of what the journalist Amanda Mull dubbed “premiocre,” or “premium mediocre,” in The Atlantic. Mull describes a consumer economy in which Millennials, robbed of a future with steady income and a pension, assuage themselves with “mid-priced bed linens” and Trader Joe’s snacks doused in truffle oil.

Many American laborers unhappy with this state of affairs can blame technology. Others point to outsourcing as the villain. America’s truck drivers say they’re the victims of their own government.

Meet Robert Mercer, the conservative billionaire who was a megadonor for Trump during the 2016 campaign but is notably absent in 2020

Sat Jul 25 , 2020
Robert Mercer and his daughter, Rebekah. Sean Zanni/Patrick McMullan via Getty Images Robert Mercer and his daughter, Rebekah, were amongst the most prominent conservative megadonors in 2016, extending unwavering support to President Trump. So far, Mercer has only made one six-figure donation to Trump’s reelection campaign. An influential figure in the […] 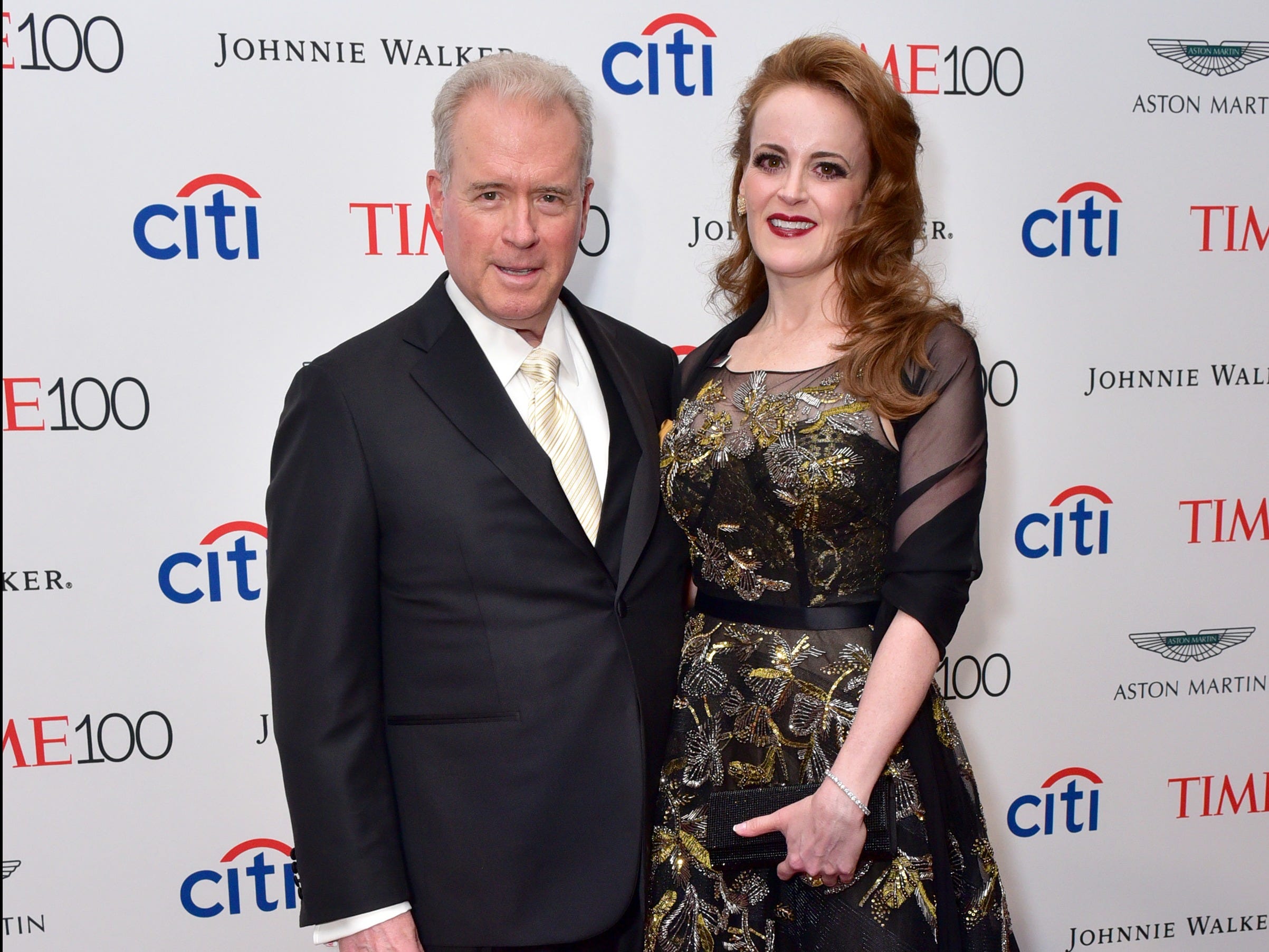