He was a fugitive who had threatened to go to war with the government and had illegally got his hands on a powerful firearm after being released from prison.

And he was in contact with another militia extremist who months later would begin plotting to kidnap Michigan’s governor, according to the FBI.

“I am now a sought after man, who is going to stand up and NEVER allow them to kidnap me again,” Kevin “KC” Massey said on Facebook.

Massey’s final days were spent running, hiding and talking about a final confrontation. That, however, never happened. The North Texas man who once led vigilante patrols on the Texas-Mexico border shot himself two days before Christmas 2019 in Van Zandt County, putting an end to the manhunt.

Over a year after Massey’s death, some of his associates who allegedly provided him with aid and support are now themselves facing prison time. While on the run, Massey, 53, became a powerful symbol of resistance for the resurgent anti-government militia movement that has been radicalizing people disaffected by the pandemic and national politics.

Cody Gene Reynolds, 34, of Hunt County, recently pleaded guilty in Dallas to buying Massey an AR-15 style firearm a few months before Massey’s suicide. Reynolds is scheduled to be sentenced in August, according to court records. His attorney declined to comment.

And Barry Gordon Croft, 44, was communicating with Massey on Facebook in the fall of 2019, promising to help him and to train him for an upcoming war against the government, the FBI says. Croft, of Delaware, has been charged along with about a dozen others with plotting to kidnap Michigan Gov. Gretchen Whitmer.

A third man, James Russell Smith, was arrested and tried on a charge of harboring Massey at his Hunt County home. But a Dallas federal jury found Smith, 70, not guilty several months ago.

Massey was already a hero to some other homegrown extremists, and his death only served to make him a martyr in the eyes of like-minded militia members. An Illinois podcaster last year called Massey a “fallen political prisoner.” And a Facebook page created for him called Massey a “patriot who served on the Texas border repelling foreign invaders.”

For federal authorities who are looking to contain the growth of domestic terrorism in the U.S, that is a concern.

“Massey’s status as a fugitive became a symbol of government oppression for individuals like Croft who harbored anti-government and anti-federal law enforcement views,” an FBI complaint in that case said.

Croft was arrested in October. Prosecutors called him a ringleader in the Whitmer kidnapping scheme as well as the “prime mover behind” the construction and testing of “weapons of mass destruction.”

Croft took part in nighttime surveillance of the governor’s house, planned to bomb a bridge, and detonated test bombs he planned to use, said Assistant United States Attorney Nils Kessler, in a filing. He has pleaded not guilty to the charges. His attorney declined to comment.

Croft messaged Massey on Facebook in October 2019 when Massey was a fugitive, the FBI says. Among the things Croft said to Massey were, “They will have to pay for what they have done,” and “I don’t care if we destroy this whole planet in the fight that is coming, but a reckoning is necessary,” an FBI affidavit said.

Croft also allegedly said that “the People” didn’t support what happened to Massey and that “Our hour draws near, brother.”

“I’m going to North Carolina on Saturday to discuss going to war against the government of North Carolina,” Croft allegedly wrote. “They invited me to speak and share tactics. Please come out bro. We need you.”

Croft also told Massey in his messages that he could help him, according to the FBI.

“I can pull you out,” Croft allegedly told him. “Let me get you nourished back to combat ready… I need to recover you, sir.”

Massey, 53, was an electrician from Quinlan, an hour east of Dallas, and a man with “alarming rage” and a love of heavy weaponry, federal authorities have said.

He had gone into hiding around May 2019, several months after being released from prison on probation for a federal weapons charge that stemmed from his armed border patrols, court records say.

In addition to being a militia member, Massey was a Three Percenter, which refers to a far-right, anti-government movement that the FBI is currently building a conspiracy case against in connection with the Jan. 6 Capitol riot and insurrection, according to published reports and court records.

The term Three Percenter, also referred to as “III%ers” or “threepers,” is based on the myth that only 3% of American colonists fought against the British during the American Revolution. Authorities say it’s not a single group but more of a common belief that a small yet determined force of armed citizens can overthrow a government. Many independent militias incorporate it into their names.

Authorities say Croft posted the following comment online in April 2019: “Be it known, any harm to KCI Massey III by the federal government will trigger my 3% [expletive] to action!!!%”

Massey came to the attention of federal authorities in 2014 when he was in Brownsville as a member of a border vigilante group called Rusty’s Rangers. Dressed in military fatigues, he conducted armed patrols with others on the South Texas border to search for immigrants attempting to cross into the U.S., authorities say.

The militia members, displeased with U.S. border enforcement, said they took matters into their own hands after obtaining permission to access private property. Their makeshift “Camp Lonestar” on rural land served as a “staging area for their patrols,” according to the feds.

Massey routinely videotaped his border activities and posted them on Facebook, court records said. He would later say on Facebook that he had the power of citizen’s arrest. In posts, Massey described detaining immigrants at gunpoint and binding their wrists with zip ties.

He vowed to remain at the border until regulators “sealed the border or there’s some sort of civil war,” prosecutors said.

But instead he was arrested and charged with being a felon in possession of a firearm. Massey was found with 20 homemade explosive devices and other weapons at the time, court records say. He was convicted and sentenced in 2016 to 41 months in federal prison.

His prison writings, archived online by a supporter, as well as his Facebook posts, show that he fervently embraced right-wing extremist movements. According to prosecutors, he also expressed support for Timothy McVeigh, whose deadly attack at the Oklahoma City federal building in 1995 killed more than 160 people and injured over 680 others.

Massey was released from prison in June 2018 to begin serving his three-year probation term, according to court records. As a felon, he could not legally have firearms.

But Massey drove with Reynolds to a Caddo Mills gun store in December 2018 to buy one, according to court records. Massey gave Reynolds money and told him which gun to buy. Reynolds then purchased the Diamondback Arms DB15 for Massey. The gun, although called a pistol, looks and performs like an assault rifle.

Reynolds pleaded guilty on March 30 to acquiring a firearm from a licensed dealer by false or fictitious statement; and aiding and abetting a felon in possession of a firearm, court records show. He faces up to 10 years in prison.

A warrant was issued for Massey’s arrest in May 2019 after he tested positive for illegal drugs and failed to report to his probation officer, court records show.

While on the run, Massey went to a second man for help, an old friend, prosecutors said.

James Russell Smith is retired from the construction industry and lives in Lone Oak, east of Dallas. He had known Massey for about 20 years and recruited him to join the Cossacks Motorcycle Club years earlier, prosecutors said. Massey told Smith he was broke, hungry and needed a place to stay, according to court records.

In July 2019, Massey moved to Smith’s property near the banks of Lake Tawakoni, court records say. Smith provided him with food and shelter and also allowed Massey to store his property, including firearms, on his land, according to prosecutors.

U.S. Marshals learned Massey was there and set up surveillance. Massey was seen coming and going from the home with what appeared to be a firearm on his hip, a federal complaint said. Agents raided the home with a search warrant but Massey was gone, having “escaped into the woods,” prosecutors said.

Smith told agents he didn’t know where Massey was. The marshals said they found an AK47-style pistol inside a bag he left behind. While the marshals continued to look for Massey, the government in July 2019 charged Smith with conspiracy to conceal a person from arrest.

Smith’s trial ended in September with an acquittal. Juror notes submitted during deliberations indicate they had an issue with a critical element of the charge – that Smith knew about the existence of a federal arrest warrant for Massey at the time.

Smith’s attorney, Keith Willeford, said in an interview that the arrest warrant for Massey had been sealed and therefore wasn’t public knowledge.

“The key issue was the fact that they had to prove that my client knew that KC had a warrant,” he said.

Willeford said Massey stayed at his client’s property for only about four nights. And no one ever called Smith to inform him that Massey was wanted or to ask for his help in locating him, Willeford said.

William Hagen, a federal prosecutor, tried unsuccessfully in 2015 to seek a tougher prison term for Massey, citing his “utter disregard for federal law.” And he issued a warning that turned out to be prophetic.

“Because the defendant not only disrespects the law, but explicitly rejects the legitimacy of it, he will undoubtedly rearm and reoffend once released from prison,” Hagen wrote.

Tue Apr 20 , 2021
Los Angeles County is expecting an uptick in its supply of COVID-19 vaccines this week, providing a welcome boost to the region’s inoculation efforts. The county’s latest allocation, pegged at approximately 362,000 doses, is up nearly 39,000 from last week, according to the Department of Public Health. That number is […] 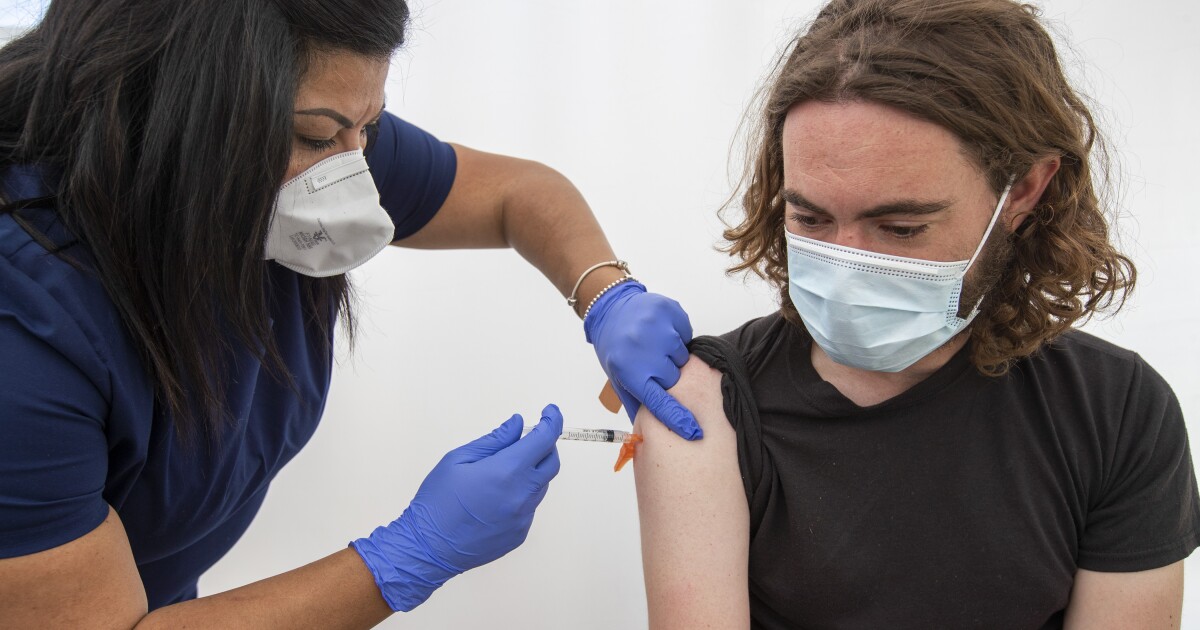