The coronavirus pandemic continues to wreak havoc across the film calendar with Sundance, Toronto and London the latest festivals to announce hybrid events featuring physical and online activity.

Below we rundown the current status of some of the key upcoming festivals and markets in the next six months; this list will be updated as developments happen.

Bosnia’s Sarajevo Film Festival is sticking to its August dates and is pushing on with a physical edition, albeit with modifications. Cinemas in Bosnia re-opened May 28 with numerous protocols including cleaning footwear upon arrival, and international travel is permitted, though in a limited form at present. Organizers intend to announce their competition line-up before the end of July, and Michel Hazanavicius is still set as this year’s jury president. The festival was first held in 1995 during the Siege of Sarajevo, so there will no doubt be confidence it can handle the virus restrictions.

After being forced to postpone from its original dates of March 24-April 6, Hong Kong Film Festival is now gearing up for its rescheduled 2020 edition in August. The event is primarily focused on local audiences so will be able to cope without a significant international delegation, which has been complicated further by the government extending its mandatory 14-day quarantine period for any overseas travellers (excluding China, Taiwan and Macau). Cinemas in Hong Kong have been opened since early May, with safety measures in place including requiring face masks and temperature checking audiences. The government announced this week that it would soon allow admissions to rise to 80% capacity (up from 50%). The event’s line-up will be announced on July 28. Filmart, one of the major Asian film markets, has already confirmed plans to hold its rescheduled edition entirely online, August 26-29.

Venice Film Festival is pushing on with plans to become the first major international fest to take place in a post-pandemic world. The Italian event confirmed today that it would select fewer titles, around 50-55, and screenings will be held in its regular venues, with hygiene and distancing procedures in place. Industry activity including the Gap Financing Market will also take place physically, albeit with enhanced accompanying online components for delegates unable to travel. Organizers said they still expect to welcome a significant number of directors and actors to travel with their films. No titles have been revealed in the program as of yet, but the independent sidebar Venice Critics’ Week will open with Carlo Hintermann’s English-language drama The Book Of Vision.

The second event in the fall festival trifecta, Telluride typically plays its cards close to its chest with announcements, but did correspond with our Pete Hammond back in May about prospects for its 2020 edition. The message was that this year will feel “very different” but they are pressing on with plans for a physical edition that will run a day earlier than previously advertised (now September 3-7) to allow extra room for screenings. The event will charter a flight from New York in addition to its usual charters from Los Angeles to help delegates travel.

North America’s largest film fest will go ahead September 10-19 in a very different guise this year, combining physical screenings with drive-ins, digital events, and virtual red carpets, press conferences and industry talks. The event will select just 50 new features, with titles already announced including Francis Lee’s Ammonite and Halle Berry’s Bruised, down from a typical crop of 250-300, with screenings taking place over the event’s first five days in a socially distanced capacity (contingent on the advice of local health authorities). Industry and press screenings as well as the industry conference will go online only this year, hosted on a bespoke digital platform launched for the fest, and the event says it is not expecting much international attendance. The organization has been hit hard by this period, noting it is expecting revenue to be down 51% this year and confirming 31 staff cuts. Its major hub the TIFF Bell Lightbox has been shuttered since March.

Spain’s picturesque San Sebastian Film Festival outlined plans for its physical 2020 edition recently. The event will open with Woody Allen’s Rifkin’s Festival and will screen numerous titles that were selected for the Cannes Label, including Thomas Vinterberg’s Another Round and François Ozon’s Summer Of 85. Organizers say they will reduce the number of film screenings by 30% and will restrict capacity in cinemas. All of the films from core programming sections will still be shown on site. The industry activity will pivot to a combination of physical and online.

As things stand, both the Zurich Film Festival and Summit will go ahead as planned September 24 – October 4. Organizers say the event is set to be the “first big cultural event in Switzerland after the lockdown” and that a program featuring star guests (they note “predominantly European”) is already coming together. The situation in Switzerland is relatively under control, so the team have already begun confirming certain films with confidence that they will be able to screen them physically. Corornavirus safety measures such as ventilation and increased hygiene will be in place; they also predict that masks will be mandatory in cinemas once the fest comes around. The event will switch to digital ticket sales, which it says will give it the opportunity to trace any infections. On the industry side, the ongoing situation is being tracked and priorities will be set depending on developments.

LFF will look very different this year, running as a primarily online edition with only a handful of live events. There will be 50 films selected for virtual premieres, with 12 screening in cinemas across the UK. Industry activity will take place online with preview screenings via a secure viewing library, as well as a program of digital talks and events. The fest is also ditching its traditional jury in favor of audience awards. The program will be announced on September 8.

One of the major Asian fests/markets on the calendar, South Korea’s Busan International Film Festival has now opened submissions for its edition in October. Korea has been championed for its handling of the coronavirus, including early rigorous testing, but its success continues to be challenged by new spikes, with lockdown measures being reappointed in certain cities. The fest says that it will “follow proper safety protocols” and “prioritize the health and safety of audiences and filmmakers”.

Tokyo International Film Festival is progressing with plans for its next edition in the fall. The fest recently put out a statement saying it had grappled with whether to open up for submissions as per normal, but had ultimately decided there was “now all the more reason” to begin selecting its program so it could “keep the lights on”. Organizers say it will go ahead, as long as they can guarantee the safety of audiences, filmmakers and staff. It will consider postponement or cancellation “without hesitation” if it cannot make that guarantee. The fest is discussing COVID safety measures with venues, including distancing and limiting audience numbers. At present, there is no clear answer on to what extent international delegates will be able to attend.

The American Film Market is aiming to take place in November as planned. The event has not yet outlined any changes it will make to this year’s edition, telling Deadline it will “announce health and safety plans later this summer”, but with virus cases continuing to spike in the U.S. there’s little doubt 2020 is going to be a very different incarnation of the market. With the Cannes Marche cancelled and Toronto looking severely restricted, the global film biz may be desperate for a physical market by the time AFM comes around, how feasible that will be later this fall is anyone’s guess.

International Documentary Film Festival Amsterdam is pushing ahead with plans for a physical 2020 edition in November, with potentially reduced capacity. The festival says its competitions will remain intact, and every movie selected across the wider program, which will be trimmed from the standard 300 titles to roughly 200, will receive a cinema screening. New will be a series of limited virtual screenings and events, available to Dutch audiences who can’t attend in person. The fest will also introduce a revenue sharing model to support filmmakers. International guests will once again be welcomed with all selected filmmakers given the option to attend in person. On the industry side, delegates able to travel will be welcome in Amsterdam, but events will also take place online for those unable to attend. The markets IDFA Forum (November 23-27) and Docs for Sales will pivot to online. Strict hygiene measures and distancing will be utilized across the board.

After being forced to cancel its 55th edition in July, the Czech Republic’s Karlovy Vary is instead hosting a special four-day event in the fall, ‘Karlovy Vary IFF 54 ½’. Running November 18-21, it will feature 30 movies that will each screening physically twice, as well as several events that would have been traditionally held at the summer fest. Karlovy Vary is also hosting screenings in the country this month for local audiences. It will be back with its official 55th edition next July.

After being able to hold its 2020 edition pre-lockdown, Sundance is now game-planning for a much changed 2021 festival. Plans being worked on include expanding beyond Park City to “at least 20 independent and community cinemas across the U.S. and beyond” as well as launching an online home to make the fest accessible to audiences that can’t travel. Sundance is scheduled for January 21-31 but organizers are mulling a start date of January 28 to add room after the U.S. presidential inauguration. The fest is giving itself options to dial up or down the live component, but the online model is being seen as a good option for discussions and live events. Despite being able to hold its 2020 edition, the wider Sundance org has been hit hard by the pandemic, cutting 13% of staff and reducing budgets, as Deadline first reported.

One of the first Euro fests on the calendar, Goteborg says it is confident it will keep to its planned 2021 dates. The team are currently planning for multiple different scenarios with the pandemic situation still in flux. In particular, they want the contingency of being able to host the market and events program online, while through its established in-house VOD platform Draken Film it has the possibility of shifting its approach to screenings if necessary. The team are tracking safety measures imposed by its exhibitors; Sweden’s largest chain, Filmstaden, just re-opened and the fest is watching that progress closely. The country’s relaxed approach to the pandemic means it is further behind in the recovery process than neighbouring nations, but there is optimism that this will have developed positively by the end of the year. The fest is, however, expecting a significantly reduced international attendance in 2021.

February 2021 may look a while away but Berlinale chiefs Mariette Rissenbeek and Carlo Chatrian say they are already exploring to what extent the festival could pivot to digital next year. “We are planning the Berlinale 2021 as a physical festival,” the duo also told us, while adding that everything will take place in accordance with the hygiene measures at the time. Both the Oscars and BAFTAs, which normally take place in close proximity to the festival, have shifted to April next year.

Tue Jul 7 , 2020
Just as Joan Fígols’ seven-year journey to fatherhood was about to end, a pandemic struck. The Spanish dairy farmer, who lives in Barcelona with his husband Alex Fernández, was anxiously awaiting the birth of their son Lluc in March when suddenly the U.S. border closed to European flights, in hopes […] 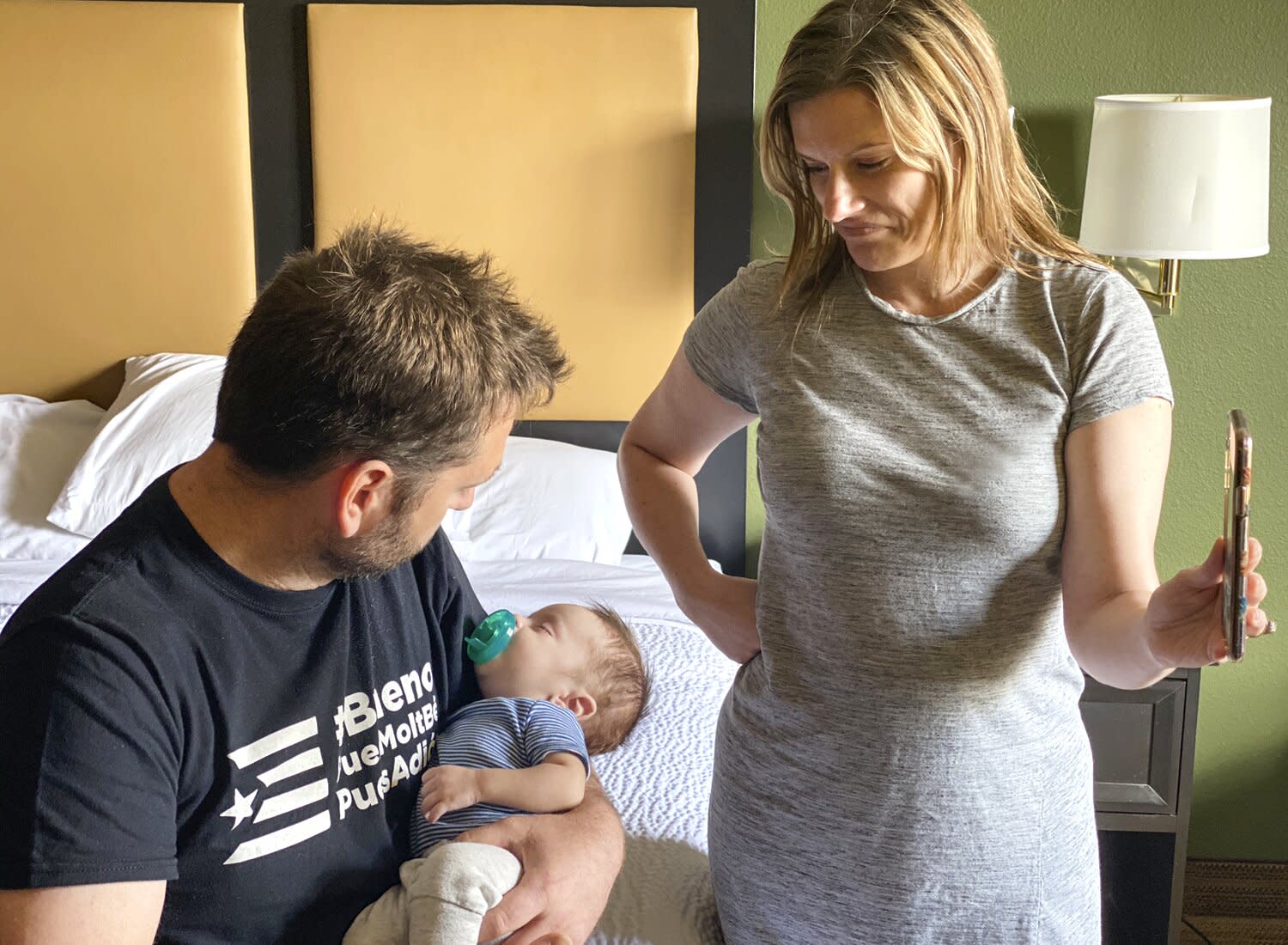