Pep Guardiola had only just arrived at Manchester City in the summer of 2016 when he was told he had a generational talent on his hands in Phil Foden.

Then the Spaniard witnessed it with his own eyes.

“We saw something special. Unique,” Guardiola recalled about the day Foden — then a precocious 17-year-old — joined in training with City’s senior squad for the first time.

Quite the compliment from a coach who nurtured Lionel Messi to greatness at Barcelona, so it’s no surprise Guardiola has regarded the development of Foden as something of a pet project.

While many wondered why Guardiola was so reluctant to make the youngster a key component of his team, the City manager was happy to bide his time with Foden, handing him 10 appearances in all competitions in the 2017-18 season, 26 in 2018-19, and 38 last season.

Sunday, it appears, was the day all that careful management showed its worth.

With a sparkling performance that signalled his arrival as a genuine English soccer superstar at the tender age of 20, Foden tormented Liverpool with his pace, movement and guile to inspire City to a 4-1 win over the fading champions in the Premier League.

Foden started as a false nine but popped up in positions across the front line — notably on the right wing for a stunning, 83rd-minute solo goal that sealed a victory at Anfield that felt to some like the coronation of a new champion.

“What a player,” Carles Puyol, the former Barcelona captain, tweeted in Spanish about Foden to his 11.9 million followers.

Guardiola was just as impressed.

“We’re lucky,” he said. “For Manchester City fans, for our people, to have a guy from our academy who loves Man City, grew up in our academy, grew up supporting us and was a ball boy for us and became already a top, top football player for us.”

Hours after the match, Foden tweeted a picture of him as that ball boy, sitting and looking admiringly at then-City striker Stevan Jovetic during a 2-1 win against Swansea at Etihad Stadium in November 2014. Alongside it was a photo of him striking his venomous finish past Liverpool goalkeeper Alisson Becker.

Foden’s City adventure began long before that, when he joined the club’s academy at the age of 9. He was in the crowd at the Etihad — and later on the field with his mother in celebration — when Sergio Aguero scored the stoppage-time goal against Queens Park Rangers in 2012 to win City the Premier League title for the first time.

Now, it’s Foden delivering the goals that are leading City back to the top of the English game. He has 10 in all competitions this season, making him the second-youngest player to reach double figures in Europe’s top five leagues after Borussia Dortmund’s Erling Haaland.

In 102 games for City, he has scored or assisted 43 goals and been on the winning side 87 times.

Foden has long been seen as the long-term replacement for David Silva, a graceful midfielder and fellow left-footer who Foden would watch in awe in training sessions. Silva departed City in the offseason after 10 years but Guardiola has preferred to use Foden in the front three, believing the youngster needs to learn the game management required to play as a midfield creator.

“In the middle, there’s another tempo,” Guardiola said in a BBC interview this season. “You have to make variations, sometimes slowly, sometimes quicker. But with his ambition and focus to learn, he will get it.”

Foden made the wrong kind of headlines in September when he was sent home from an England squad, days after making his debut against Iceland, for breaching biosecure coronavirus bubble rules by meeting women at the team hotel in Reykjavik.

While that raised off-the-field concerns, his on-field maturity is such that he has played as a false nine — basically a deep-lying central striker — against Real Madrid in a Champions League knockout match in July and now at Anfield against the Premier League champions.

Notable, along with his weaving run and assist for Ilkay Gundogan’s second goal and then his own spectacular strike, was his work rate and ability to link up play with his control and touch.

Sometimes frustrated at his lack of opportunities, Foden could easily have pushed to go out on loan or even switch clubs permanently like other City youngsters such as Jadon Sancho and Brahim Diaz have done.

It seems, though, that Guardiola has handled Foden to perfection, perhaps lengthening his career in the process.

Foden would have been touch and go to make England’s squad if the European Championship had taken place as planned last year. Now, a star at City, he’ll likely be a starter for his national team for the delayed tournament this summer.

The history-making women and other highlights

Mon Feb 8 , 2021
While the stadium looked filled, it was due to 30,000 cardboard cut-outs This year’s Super Bowl was like no other, for obvious reasons. Tom Brady steered the Tampa Bay Buccaneers to a comfortable 31-9 victory over the Kansas City Chiefs, but many of the night’s talking points were off the […] 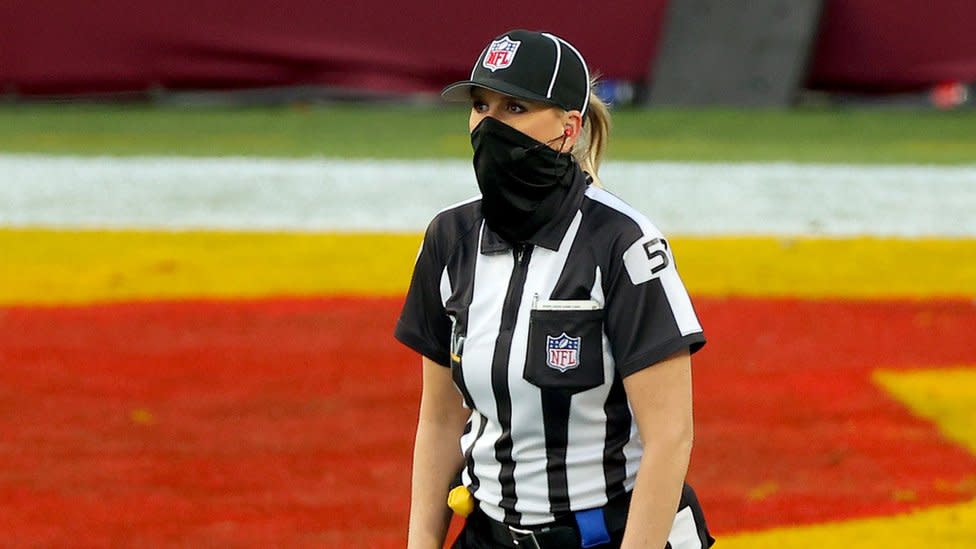