A little over a hundred years ago, the United States emerged from the double whammy of a world war and deadly pandemic. Eager to get back to “normal” life, Americans went on a decade-long spending splurge, buying cars and radios and stocks, most for the first time ever.

Although we all know how it ended, the Roaring Twenties was largely a product of pent-up demand.

This summer, I believe we could see the start of a similar demand-driven economic boom as millions of Americans, newly vaccinated and $1,400 richer, make up for lost time by booking flights and vacations, going on cruises, taking the family to Disney World and more.

As I shared with you earlier this month, close to $18 trillion sit in Americans’ savings accounts right now—a record amount. Much of this cash is just waiting to be unleased into the U.S. economy.

Things are already heading in the right direction. According to CLSA’s proprietary reopening index, the U.S. saw the biggest weekly gain since the start of the pandemic, up 8%, as the number of new daily infections dropped further. Here in Texas, all COVID-19 restrictions were lifted 100% last on Wednesday, just in time for Spring Break.

Airlines Betting on a Strong Rebound in Summer Bookings

Last week marked the one-year anniversary of the start of the pandemic, and if Google Trends data is any indication, Americans are ready to travel again. The number of Google queries for online travel agencies Expedia, Priceline and Travelocity hit pandemic highs last week as airlines announced new deals and routes. Low-cost carriers Allegiant and Southwest recently expanded their networks to include 36 new non-stop routes in the former’s case, 17 in the latter’s. According to Bloomberg, this is the second-largest network expansion in Allegiant’s history and the largest for Southwest since 2013.

Across the Atlantic, Lufthansa is also adding to its slate of summer destinations in anticipation of a strong rebound in bookings. Europe’s largest carrier will add around 20 new routes from Frankfurt and 13 from Munich to vacation spots such as the Caribbean, Canary Islands and Greece.

Meanwhile, credit card data from the end of February shows an uptick in airline booking among older Americans—those most likely to have been fully vaccinated. At a Raymond James conference, the CEOs of Delta and Spirit told investors that bookings took a positive turn in mid-February.

Passenger volume in the U.S. is still down about 60% compared to pre-pandemic levels, but I expect this to improve the closer we get to vacation season and as more people get their shots. Cowen aviation analyst Helane Becker, who helped us launch our airlines ETFs in 2015, told Yahoo Finance that she believed the number of daily passengers would cross above 1 million by March 20. As of March 14, the number exceeded 1 million people for the fourth day straight. American Airlines is so optimistic of a recovery in summer leisure travel that it just increased the size of its debt financing, from $7.5 billion to $10 billion. The debt, according to MarketWatch, is underpinned by the carrier’s $20 billion AAdvantage loyalty program.

Another sign that airlines are sensing a shift in Americans’ appetite for air travel? Budget carrier Frontier filed to IPO last Monday, saying that it was “well positioned to take advantage of the anticipated demand recovery as vaccine distribution continues.” Rival carrier Sun Country also provided new details for its own upcoming IPO on Monday, telling investors it seeks to raise some $200 million to help pay off pandemic crisis loans from the federal government.

$15 Billion Stimulus for Airlines and Airline Contractors, $8 Billion for Airports

The U.S. aviation industry is set to receive another round of fresh stimulus now that President Joe Biden has signed the $1.9 trillion rescue package.

American and United immediately dropped plans to lay off or furlough a combined 27,000 workers.
Included in the bill is approximately $15 billion for airlines and airline contractors, $8 billion for airports and concessionaires. As expected, U.S. airline and airport trade groups were quick to praise the rescue package. Airlines for America (A4A) wrote that it’s “vital to have our employees on the job and ready to assist as our nation prepares to move forward from this crisis,” while the American Association of Airport Executives (AAAE) said that the amount earmarked for airports “underscores the enormous financial impact that the pandemic is having on airports and the entire aviation ecosystem.”

How the Semiconductor Chip Shortage Will Contribute to Inflation

One of the anticipated consequences of economic reopening is higher inflation. Add trillions of dollars in new debt and money-printing, and inflation could end up being hotter than any of us expected.

Last week, the Bureau of Labor Statistics (BLS) reported that the consumer price index (CPI) rose slightly to 1.7% year-over-year in February, up from 1.4% in January.

Of the items tracked by the BLS, used car and truck prices advanced the most at 9.3%. This was the sixth straight month that used vehicle prices jumped more than 9% compared to last year.

The reason for this is simple economics: Too few vehicles available for sale during the pandemic and too many buyers.

In a research report, CLSA wrote that the chip shortage “should ultimately hasten electrification of the global automotive industry.” With chip supply in question, automakers are shifting priority to the products highest in demand right now, i.e., electric vehicles (EVs). A number of companies, including Ford, General Motors and Toyota, have extended plant shutdowns due to limited chip availability.The price hike is likely to continue with the global shortage in semiconductor chips, which are used extensively in automotive manufacturing. The “smarter” our cars and trucks get, the more chips are needed.

As a result, prices for traditional internal combustion engine (ICE) vehicles will certainly face upward pressure as fewer of them roll off factory floors.

The moral to the story? If you’re in the market for a new car or truck, you might want to make a purchase sooner rather than later.

Ethereum Mining Revenue Broke Above $1 Billion for the First Time

The chip shortage has hit other industries, of course, including crypto mining. Demand from miners is so high right now that chipmaker Nvidia announced it will be releasing a new series of semiconductors designed specifically for mining Ethereum.

In other Ethereum-related news, Coin Metrics data shows that monthly revenue generated by Ethereum miners hit a record $1.37 billion in February, an incredible 1,300% increase from the same month in 2020, and a 65% increase from the previous month. 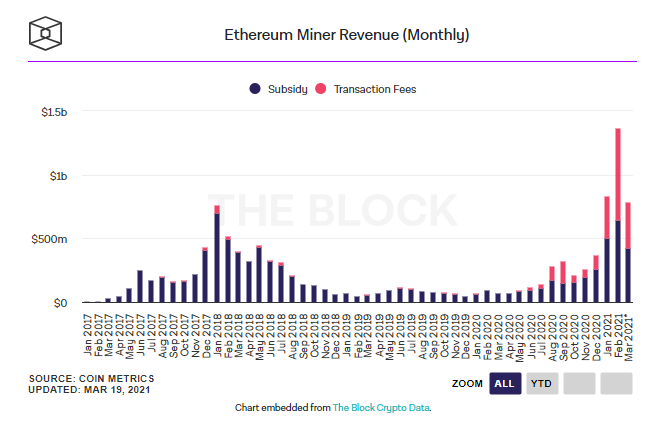 Missed our webcast last week on crypto and gold? You’re in luck! The replay is available to listen to by clicking here.

Some links above may be directed to third-party websites. U.S. Global Investors does not endorse all information supplied by these websites and is not responsible for their content. All opinions expressed and data provided are subject to change without notice. Some of these opinions may not be appropriate to every investor.

The Consumer Price Index (CPI) is one of the most widely recognized price measures for tracking the price of a market basket of goods and services purchased by individuals. The weights of components are based on consumer spending patterns.

The Venus Sun Conjunction This Week Asks You To Evolve

Sun Mar 21 , 2021
Cosmic Health is your day-by-day source of celestial advice—with a wellness twist. Astrologer Jennifer Racioppi looks to the stars to find out what’s in store for your week when it comes to food, fitness, sleep, sex, and more. See All Sunday kicks off with Venus, the planet of love and […]