With little in the way of market-moving news overnight, U.S. investors appear to be assessing the recent selloff and bounce in tech-related companies.

Stocks may be in consolidation mode, with investors waiting for a fresh catalyst to move the market one way or another.

Overnight, the European Central Bank stood pat on its policy stance, in line with expectations. In economic news on this side of the pond, initial jobless claims came in at 884,000, compared with a Briefing.com consensus expectation of 813,000. The August producer price index increased 0.3%, in line with forecasts.

Later today, the government is scheduled to auction $23 billion in 30-year Treasury bonds. After weak demand in an August auction, it could be interesting to see whether there will be more interest this time around. You may want to watch the bond market for movement later today.

Though it’s technically the off-season for earnings, there are still some nuggets this week. GameStop Corp. (NYSE: GME) shares were down more than 9% in premarket trading after the video game retailer reported a larger than expected loss and also missed on revenue. Still, the company’s digital sales grew strongly.

The pandemic has helped accelerate the trend toward online sales for many companies as people spend more time at home. And the increasing numbers of people who are working, learning and playing at home has created a stay-at-home trade, with certain companies benefitting more than others.

How’s the stay-at-home economy shaping up? We’ll get fresh snapshots this afternoon from two of them—one from e-commerce and one representing the workout-at-home trend. Sales at pet food and supplies e-tailer Chewy Inc (NYSE: CHWY) have run strong amid lockdown, and this afternoon might see more of the same. Ditto for Peloton Interactive Inc (NASDAQ: PTON), which recently sprinted to new all-time highs as many gyms remain closed, forcing fitness seekers to set up operations at home. Plus, PTON announced this week that it would be cutting some prices and adding to its product lineup.

Oracle Corporation (NYSE: ORCL) also reports this afternoon, with analysts keen to hear an update on CEO Larry Ellison’s plan to bolster its cloud and software-as-a-service (SaaS) lineups. In recent calls, Ellison has talked up ORCL’s customer relationship business, no doubt eyeing the dominance of salesforce.com, inc. (NYSE: CRM)—another company that saw shares blow through all-time highs after its most recent earnings release.

Shares of big tech-related companies have been in the driver’s seat – leading the recent stock market plunge and, on Wednesday, helping spark a comeback.

It looks like investors decided enough was enough and decided to snatch up big-name companies at what they may have considered bargain prices.

It seems there was a similar dynamic afoot in the oil market, where U.S. crude futures rose more than 3% in a bounce from sharp losses in the previous session.

That helped the Energy sector move slightly higher on Wednesday, but it’s still battered. As of Tuesday’s close, energy companies were down more than 40% year-to-date while no other S&P sector was off anywhere near that much.

The pandemic-sparked economic slump has sapped demand for crude, and with the summer-vacation driving season over and business travel on the back foot. Anyone considering a long position in this part of the market might have reasons to be optimistic that the fundamentals could improve. (See more below about some potentially positive developments that could help energy companies.)

Investors seem inclined to be pessimistic on Energy and it’s sometimes a momentum that builds on itself, just like the upside momentum that got built into Tech before its recent stumble. But nothing goes down forever. As the saying goes: Low prices cure low prices. And vice versa.

As for the broader market, it seems that some investors felt prices of tech-related companies may have gotten a little out of hand and wanted to book some profits and reassess where more appropriate valuations might be. Even though many tech-related companies are benefiting as more people work, learn, and play at home, investors still want to be realistic.

It’s arguable that the recent pullback might be healthy for the market, especially if some money rotates out of the Tech sector to help other sectors gain ground and make the recovery more broad-based.

Still, it remains to be seen whether this bounce can translate into a base from which the market can try to resume an uptrend.

CHART OF THE DAY: VIX FIX: The market on Wednesday breathed a sigh of relief as the steep slide of the previous three sessions came to an end. With nerves somewhat soothed, Wall Street’s main fear gauge, the Cboe Volatility Index (VIX) gave back more than 8% yesterday. Data source: Cboe Global Markets. Chart source: The thinkorswim® platform from TD Ameritrade. For illustrative purposes only. Past performance does not guarantee future results.

What Could Energize the Energy Sector? The beleaguered Energy sector might get a boost if the U.S. government pushes fresh stimulus through. The extra spending from that eventually would have a good chance of trickling down to the oil and gas companies that profit when energy demand increases. Another possible bright spot that could help the economy, and demand for oil, would be the development of a vaccine. Any signs of mergers and acquisitions also might support Energy because that could be a sign of struggling firms pooling resources to weather the storm.

Speaking of which, two more storms are forming in the eastern Atlantic. If either develops into a hurricane headed toward the Gulf of Mexico, crude could get a temporary boost, which may or may not translate into positive sentiment for the lagging Energy sector. Those are a lot of “ifs,” and it’s not a great idea to make investments based solely on hypotheticals. Energy has had a rough go of it, and for good reasons. Sure; the lockdowns, travel restrictions, and shift to working from home certainly hurt the short term. But some of those trends might have staying power. Meanwhile, industry trends from automakers to electric grids continue to point away from fossil fuels toward renewables and alternative sources.

Gold Rises With Equities: In a somewhat rare development considering the size of the up move in equities yesterday, gold also moved higher. With the VIX in retreat, indicating easing tension among market participants, you might expect gold to also move lower. Gold’s status as a safe-haven investment means that investors often buy it when risk-off sentiment rises and sell it when risk tolerance increases, such as on Wednesday. But gold, which is mainly denominated in U.S. dollars, is also sensitive to the moves of the greenback. The dollar was easing yesterday, making dollar-denominated gold more attractive for those holding other currencies, apparently boosting demand for the shiny commodity.

Race for a Vaccine: One milestone in the coronavirus story that would likely give the market a shot in the arm would be the development of a vaccine. Such a step might help economies recover faster as more people might feel freer to go shopping or eat out, and stores and restaurants might not have to use up so much floor space on social distancing measures, which tend to take a bite out of profit margins. The race for a vaccine hit a stumbling block when AstraZeneca plc (NYSE: AZN) paused its late-stage vaccine trial over safety concerns. Its shares fell nearly 2% Wednesday on the news, and some investors apparently were favoring other companies involved in vaccine development.

But it seems a setback at one biotech firm is an opportunity for others. Among Wednesday’s stock-price increases in companies working on vaccines: Moderna Inc’s (NASDAQ: MRNA) shares rose more than 4.7% while BioNTech SE – ADR’s (NASDAQ: BNTX) were up more than 4.1%. Overall, biotech was a winner yesterday, with the S&P Biotechnology Sector Select Index ($SPSIBI) advancing 2.3%.

Photo by Uwe Conrad on Unsplash

© 2020 Benzinga.com. Benzinga does not provide investment advice. All rights reserved.

Fri Sep 11 , 2020
A Penn National Gaming (NASDAQ: PENN) analyst has issued a Street-high price target and laid out a case for shares of the sports betting stock to hit $300 if everything goes perfect. The Penn Analyst: Rosenblatt Securities analyst Bernie McTernan initiated coverage of Penn National with a Buy rating and $80 […] 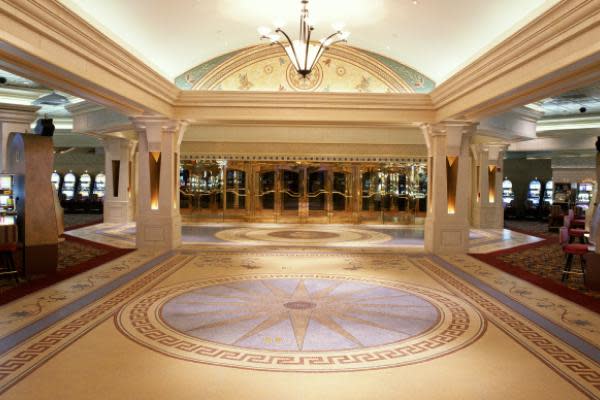