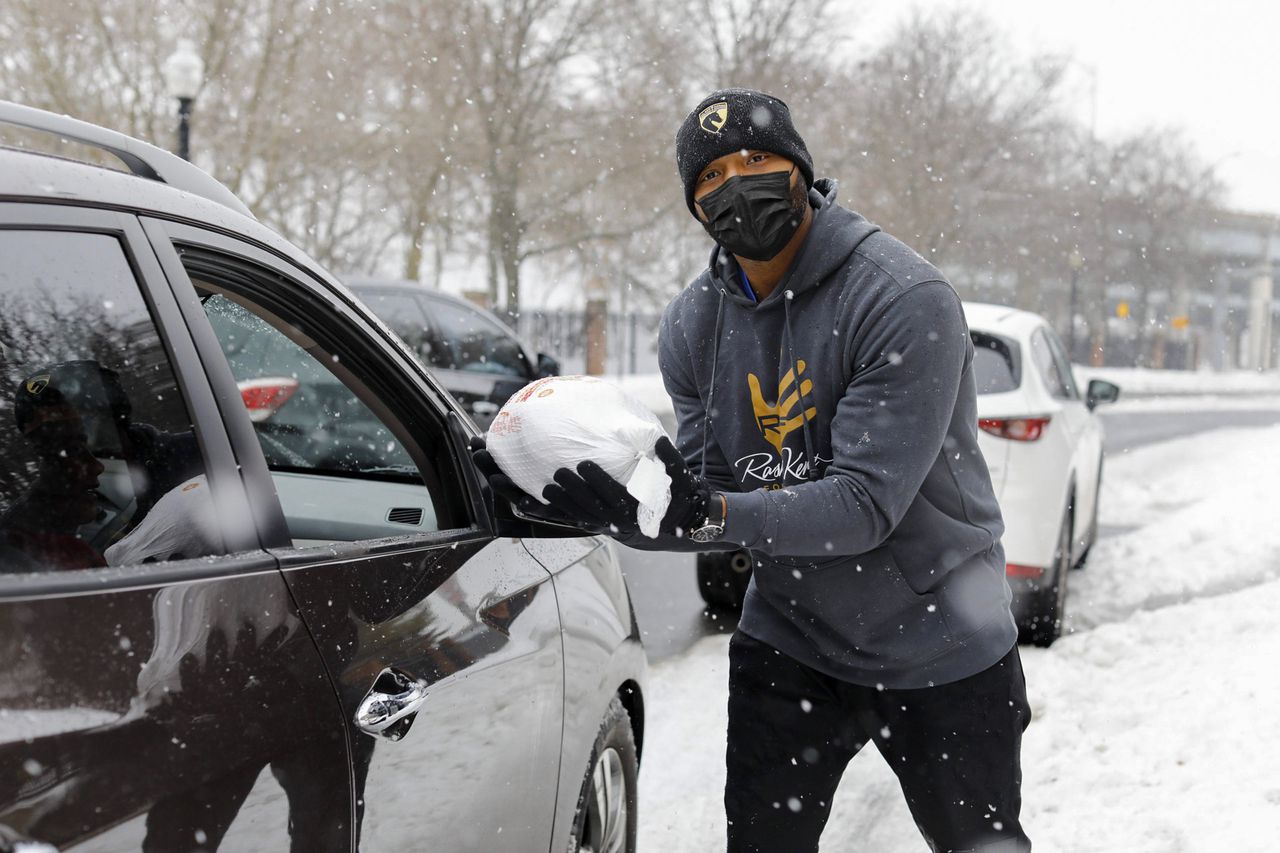 The days crawled at the Federal Correctional Institution in Morgantown, W. Va., as the prisoner paced in his cell, laid on his bed, stared at the walls. He waited for meals, recreation time, even sleep – anything that would make the clock move faster and the agonizing slow days fall off the calendar. On this afternoon, no matter how many push-ups and sit-ups he sweated through in his cell, they couldn’t exhaust his mind and stop the nagging thought that had pestered him from the minute his cell door locked that first time:

What am I doing here?

He daydreamed about all he had achieved in the first 29 years of his life – a record-setting college basketball career, three seasons in the NFL, the often arrogant and self-important lifestyle of a revered college and pro athlete, the love and admiration of his tiny hometown. But here he was, sitting in a prison cell fewer than 20 miles from where he grew up, an inmate like any other.

Rashod Kent — former Rutgers basketball star, NFL tight end and hero to many in Fairmount, W.Va. — was just another person who had put himself in bad situations, made worse by poor decisions. Today, 12 years later, Kent is an ex-con trying to rebuild his life and reputation.

He was sentenced to more than three years in prison – 27 months on gun and drug charges, then another 12 months for violating his supervised release. He stepped out of his cell for the last time in June 2015 and vowed never to jeopardize his freedom again.

Today, he is the founder of a small nonprofit that distributes Thanksgiving turkeys and warm coats. It’s a modest start at making a difference – and making amends.

“Rashod Kent has one of the greatest journeys I’ve seen a player take since his graduation and his time ended at Rutgers,” said Brian Kelley, a friend of Kent’s and the former president of the Rutgers Court Club. “It’s been heartbreaking at times, it’s been uplifting at times, but through it all, he’s really persevered and come out a winner on so many levels. It’s a story that needs to be heard.”

Kent looked like a football player for as long as he can remember, his shoulders the broadest of anyone his age, but he never had much interest in playing the game competitively. He swore it off when he dislocated his shoulder in a sandlot game at 8 years old, then again after giving it a shot as a high school freshman.

Kent was a better basketball player, anyway. A bulldozing big man, he starred for Fairmont Senior High School, blossomed into an All-Big East forward at Rutgers and had his sights on the NBA.

Then he received a phone call from the New York Giants, who convinced him to come to their facility for a workout. He posted a 41-inch vertical leap, ran the 40-yard dash in 4.5 seconds at 270 pounds, and caught 39 out of 40 passes. Scouts noticed. They began showing up at Rutgers, dragging him from classes to work out. The guy who had sworn off football suddenly was an NFL prospect.

He didn’t get picked in the 2002 NFL Draft, but he signed with the Houston Texans, taking a roster spot from lifelong football players who, Kent says, took it personally. It led to a three-year odyssey that started in Houston, passed through Glasgow in a summer with the Scottish Claymores of NFL Europe and ended in Oakland.

Kent spent most of his rookie year sidelined with an ankle injury, but in his second NFL season, which began immediately after his stint in Scotland, he played in seven games, with four starts. He had only one pass thrown to him, spending most of his only NFL season blocking.

After he was cut by the Texans the following April, he signed with the Oakland Raiders. In a training camp practice, Kent stepped in a hole on the field during a drill, tearing his ACL, MCL, his calf muscle and ending his professional football career.

“That’s the day I decided I no longer wanted to play in the NFL,” he said.

The next year of Kent’s life was spent rehabbing the gruesome injury, but he wasn’t prepared for what came after that: a steep fall after spending 24 years on a pedestal.

“When the lights go out and you have to maintain your image and your lifestyle coming from where you came from, it’s not always an easy transition for players,” Kent said.

When Kent returned home after his NFL career ended, he was celebrated as a local legend, given a key to the city and granted his own holiday. June 22nd was named Rashod Kent Day in Fairmont.

It would be one of the many things he lost as his poor decisions piled up.

“Everyone has their demons. My demon at this point in time was maintaining a lifestyle,” Kent said. “That professional lifestyle, being able to maneuver unrestricted. That’s intoxicating. Some people can deal with it, some people can’t. Some people Lindsey-Lohan it, Britney-Spears it, Kanye-West it.

“It’s a combination of selfishness, lack of maturity, not putting God and family first, bad company, bad decisions all rolled in one.”

In the fall of 2008, Kent was involved in an altercation that began when he was sucker-punched in his neighborhood, he said. When a brawl broke out, his attackers ran away, and Kent gave chase. He grabbed a gun from his car — which belonged to a friend, he said. Prosecutors said Kent shot at the man.

Kent said that when he caught up to them and began swinging, the gun still in his hand, the pistol went off accidentally. No one was hit by the gunfire, and Kent was charged with wanton endangerment with a firearm.

Four months later, while he was still awaiting a court date, Kent met up with a close childhood friend. In what Kent claims was a favor for another friend, he sold him an ounce of cocaine. That friend, it turned out, was a confidential informant for the Fairmont Police Department, and Kent was recorded charging $1,800 for the ounce of cocaine and reminding him that he still owed Kent roughly $500 from a previous sale. Kent was indicted on federal charges for distributing within 1,000 feet of a playground and eventually pleaded guilty.

Kent insists it was “a singular incident” and he was “not a drug lord” like many assumed when they saw the headlines.

“Everyone was shocked that it happened to me because I wasn’t known for that. That’s not what I did,” Kent said. “When I agreed to help somebody in that type of manner, that’s how God punished me for that.”

Kent pleaded guilty to both charges. The judge noted his good behavior and the drug tests he had passed in the months before his court date and approved his request for both sentences to run concurrently. Kent was sentenced to 27 months in federal prison and six years of supervised release. In August 2010, he reported to FCI, where he served two years.

Within a year of his release, however, he tested positive for synthetic marijuana in a urine sample, according to court records, a violation of his supervised release. Sentenced to another 12 months, Kent was back behind bars, staring at the walls.

“That second sentence was a turning point,” Kent said. “Before that time, my eye was no longer fixed on family. My motives became selfish. When I became self-motivated, I made all the wrong decisions. I hung with all the wrong crowds and with that comes treachery. I had to meet that head-on and I’m glad I went through it.

“I don’t think about it anymore because I paid my dues for that, I’m past that point, I’m a better man for it and God has put me in a position to put the less fortunate in a better position. That’s all I’m focused on.”

Kent was courtside at the Rutgers Athletic Center on New Year’s Day 2017 to watch his alma mater face Penn State. It was not the first time he was back watching the Scarlet Knights since graduating — he attended a basketball game a year earlier — but this visit was special: he received a commemorative ball to honor his contributions to the program.

Kent — who holds the program record in career field goal percentage (60.3%), ranks in the top five in career steals, rebounds and free throw attempts, and owns Rutgers’ two best individual shooting seasons — is hopeful he can hear the RAC roar for him again.

Kent believes that before that happens, he must first redeem himself. That, he says, has been his mission since walking out of prison five years ago.

He has stayed out of trouble, devoting much of his time to real estate holdings, multiple small business ventures and, most recently, his nonprofit organization. Inspired by his late grandmother Viola York Horton, who was the first person in West Virginia to die of the coronavirus last March, Kent started the Rashod Kent Foundation in October 2020, with a goal of giving back to his communities.

“I always promised her I would make her proud and make my mark on the world and leave a real legacy and make a real difference in people’s lives,” Kent said. “I knew what needed to be done. I knew God placed this on my heart and he was using me as a vehicle for change because of the motivation I had to finish the mission.”

Kent wants to award money for books to college students who “excel in academics and community service.” He plans to distribute his first checks in May to a pair of incoming Rutgers freshmen ahead of the fall semester. He said he hopes to expand the program to Fairmont, Houston and Bridgeport.

“I let a lot of people down who believed in me,” Kent said. “The things I’ve done [to make amends] has been for them, for everyone who has ever believed in me that I’ve let down. That’s who I really am. Not the mistake that I made.”

A decade after losing his local holiday, Kent was commended at a Fairmont City Council meeting for his turkey and coat drive. It was the first of many redemptive acts. Rutgers is on the top of his second-chance list.

Like Ray Rice, the former Rutgers running back and NFL star guilty of domestic violence who wonders if his Piscataway purgatory will ever end, so, too, Kent dreams of seeing his No. 44 jersey hanging from the RAC rafters. It’s an honor he believes he earned on the court, but he knows his athletic achievements cannot be separated from his troubles off the court.

So, he is pleading his case one good deed at a time.

“I owe greatness to my family, myself, my community and my school,” Kent said. “I can’t stop until I felt that I’ve redeemed them, and I’m going to.”

Brian Fonseca may be reached at [email protected].