SOUTH BEND, Ind. — Ryan Ayers, a former Notre Dame men’s basketball assistant coach who left the program abruptly prior to the season, was charged Tuesday in St. Joseph County with three counts of voyeurism and one count of domestic battery.

The charges stem from Ayers’ relationships with two women over a four-year span where he allegedly recorded them, without their consent, naked or while having sex. He is also accused of hitting one of the women in the face during an altercation in his car.

Neither woman is directly tied to Notre Dame and neither currently lives in Indiana.

Charging documents say the St. Joseph County Cyber Crimes Unit recovered from Ayers’ phone “various images of naked women where they seem to be unaware that a photo was being taken of them. These images include the women in the shower, sleeping on a bed, or in a sexual position.” 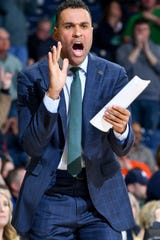 One woman told investigators she and Ayers got into a “physical altercation” while driving in St. Joseph County in July 2020, when she found messages from another woman on Ayers’ phone. During the altercation, Ayers took the woman’s phone and attempted to kick her out of the car, hitting her in the face in the process, documents say.

The woman also told investigators that she learned images of her, taken by Ayers in his South Bend home, had been shared by Ayers in a group chat with “the guys,” documents say.

Detectives also interviewed a second woman who alleged that Ayers took a video of her without her consent.

The second woman said she had dated Ayers in early 2018. On one occasion at Ayers’ house in South Bend in April of that year, she caught Ayers recording the two of them having sex on his phone, according to court documents. The woman complained and Ayers promised to erase the recording. He later apologized in an email exchange, court documents show.

Two of the voyeurism charges against Ayers are felonies, while the third voyeurism count and the domestic battery count are misdemeanors. A warrant for Ayers’ arrest was issued Tuesday.

One of the accusers told The South Bend Tribune that she had known Ayers since he was a player at Notre Dame. She says they had a brief romantic relationship in 2007, when he was still a student, and started a new relationship years later, with her joining Ayers on summer recruiting stops and some games.

She said that one day in April 2018, she realized that Ayers was using a cellphone to videotape them having sex. She had turned down a request from him to do so months earlier, she said.

Tension over the cell phone incident remained the rest of that day and an argument ensued in the evening, at Ayers’ home. She says she checked into a South Bend hotel in the early morning hours before flying out of town a few hours later. She did not file a police report at that time.

“He messed with my life,” she said. “I was afraid to go forward.”

In the weeks after the 2018 incident, the woman says, Ayers apologized and they stayed in touch, via text, phone calls and letters.

She says she came forward to authorities when she learned in August 2020 that there was a second accuser.

In a statement Tuesday night, South Bend attorney Peter J. Agostino said on behalf of Ayers, “Ryan denies the allegations. His defense team is coming together and will vigorously defend him. Ryan looks forward to clearing his name of these false charges.”

When the Irish men’s basketball program announced in late September that Ayers, a 2008 graduate and former player, was no longer on staff, it left more questions than answers.

Workouts for the 2020-21 season already had started when Ayers left.

Ayers graduated from Notre Dame in 2009. A four-year letterman, he averaged 6.5 points and 2.4 rebounds in 117 career games. He also spent four seasons (2016-20) on Mike Brey’s coaching staff. When a vacancy on his staff surfaced following the 2015-16 season, Brey’s first call was to Ayers, then an assistant at Bucknell.

In a statement Tuesday, Brey said, “The university and I decided that Ryan was unable to continue in his role to be a leader of young men, so it was necessary to make the staffing change a few months ago. This is a personal issue for Ryan and we won’t elaborate any further.”

An Insurance Firm In Your Car And Extra

Dad And Mom Of Infants

Middle For Art & Entertainment To Open In April In Downtown Hendersonville