Josh Gracin texted Thad Szott in an attempt to get on a buyer list for the 2021 Ford Bronco.

But there is no list yet, not even for country music singers in Nashville.

“People are so excited to get their hands on the Bronco,” said Szott, co-owner of Szott Auto Group in White Lake Township, Michigan. “Every time I post something on my social media to let them know the timeline, I get about 10 people begging me to get them on the list. They have to go to the Ford website and pick a dealer. But people are, like, ‘Please help me.’ “

These are buyers who see themselves as outdoorsy and adventurous, or people whose parents had a classic Bronco, which was built from 1966 to 1996 and now gets top dollar among collectors.

“I’ve always wanted one as a kid growing up in Westland, Michigan,” Gracin wrote in an email to the Free Press during a break at the recording studio this week. “The Bronco is iconic in so many ways — from off road, to just your afternoon drive with friends, with the roof off and plenty of summer sun. Before I could drive, Bronco production was discontinued and the stars have never aligned for me to own one. I’ll be jumping online as soon as they are available to reserve.”

The big reveal for the 2-door and 4-door Broncos and smaller Bronco Sport is next Monday in partnership with Disney.

“These are the free spirits, the wind-in-the-hair type folks,” Szott said. “This is an emotional vehicle, similar to Jeep Wrangler. Bronco demand is going to exceed supply, no doubt. It’s new. It’s exciting. It’s sexy. When you start removing the tops from vehicles, it creates all this emotion. Friends out of state want me to get them on a list but there is no list.”

Loyalty to Jeep can’t be underestimated.

Brian Moody, executive editor at Autotrader.com, said, “Jeep has been capitalizing on their heritage for decades, and not in name only. Jeep has proven that a genuinely capable adventure/utility vehicle with a nod to the past is what many people want. And that’s what the Bronco promises, if they can deliver an authentic product and, more importantly, communicate that authenticity laced with nostalgia, it will be a winner.”

He added, “The Jeep Wrangler and Gladiator are exactly the kinds of vehicles current shoppers, young and old, want — both Gen X and Gen Z. The Wrangler puts them exactly where they want to be, out and away, immersed in nature, not likes, news feeds, data and crowded cities.”

Ford knows what it’s like to sit on top as maker of the bestselling Ford F-150 and F-Series pickups. Ford has had that title since forever, just like Jeep has dominated the off-road segment for more than half a century.

A spokesman for Fiat Chrysler Automobiles declined to comment for this article.

“Wrangler’s on fire,” Szott said. “We’re one of the bigger Wrangler dealers in the Midwest. We’re literally going to sell out and not have a new supply for, like, a month. We’re probably going to be out in 30 days. The demand has never diminished and factories shut down for six weeks because of coronavirus.”

Since restarting in May, business has been a “frenzy,” he said. “The pace is maddening. I can’t believe what we did in June. True Jeep people are going to stay Jeep people. Jeep is like an extension of our personality. Other cars are just like transportation.”

Getting competition from the Bronco will make the Wrangler even better and is great for the market, said Szott, who sells far more top of the line Jeep Wrangler Rubicon models for $55,000 to $60,000 than he does the Wrangler Sport model that starts at less than $40,000.

“They’re way sexier with bigger, beefier tires, a 2-inch lift on the vehicle from the factory,” he said. “It just looks more bad-ass  and it’s designed specifically for off-road purposes” like rock crawling and muddy trails.

While a majority of buyers will never go off road, most like to have the option, Szott said.

“We probably have 30 Wranglers left and that’s less than a 30-day supply for us,” he said while delivering a vehicle to Gaylord. “What’s happening is the used Wrangler market is on fire now. We’re doing everything we can to get our hands on used Jeeps, and vehicle prices are appreciating. There was a vehicle we were looking at online at auction, a Jeep Wrangler, and we bid $4,000 over the average selling price and we didn’t get it.”

Szott Auto Group, which has four dealerships in Oakland County, Michigan, that sell new Chrysler, Jeep, Dodge, Ram, Ford and Toyota vehicles plus all makes and models of used vehicles, sold 706 vehicles in June — exceeding the monthly average of 550. The top sellers are trucks and SUVs, led by Ram 1500 and Jeep Compass. He traveled the state this week to check on Wrangler supplies and found other dealers running low or empty.

John Campbell, 50, of White Lake is an executive vice president at the Detroit Trading Company, an automotive data and technology firm. He drives a 2010 Infiniti G37S and he just purchased a metallic gray 2020 Jeep Wrangler Rubicon for his 16-year-old son — a “fun toy” they can enjoy together.

“Right now, we drive down dirt roads, trails and climb small hills. There are off-road trail parks all over the country. We plan to take the Jeep to these parks this summer, where we can do hard-core rock climbing stuff. ” Campbell said. “The resale value is outstanding.”

Campbell has owned four Infinitis because they can take 150,000 miles with no problems, he said. His wife drives a 2020 Cadillac Escalade. His daughter has a 2019 Jeep Cherokee.

Would he have considered buying a Ford Bronco instead of a Wrangler? Nope.

Jeep Wrangler “is a known” product and perfect for his son, he said, who is “a free-spirited person, adventurous, one with nature and appreciating everything Earth’s got to offer.”

“The excitement level is pretty high,” he said. “I think we’ll get more orders for the Bronco the day of the launch than we did for the Mustang Mach-E. I think we got eight to nine orders. The Bronco fits our market a whole lot better. And I think we’re going to get some converts, but it will take a little bit of time.”

King, 56, said he plans to order a Bronco as a daily driver.

“It’s a game changer for me. Now I can take the top off. It’ll make it a vehicle I’ll drive,” he said. “I’ve been driving a Mustang convertible for years. Now I have a (2018) GT convertible.”

This new off-road vehicle puts Ford “into a completely different market,” King said. “The catch phrase when they introduced Bronco was ‘Beat Jeep’ — two years ago. With over 200 employees, we’ve got more than a dozen Jeeps in our employee parking lot. There is nothing else that does what those vehicles do off road. And they own that market. I know we’ll get half of those (Jeeps).  … Jeep people will have to wait and see what it’s going to look like. They’re not committal yet. But we’re excited. It’s been a long time coming.”

Jeep Wrangler has seen steady sales in what Ford calls a “growing” off-road category, according to data from Cox Automotive:

Ford executives told its dealers during a closed-door meeting on February 2016 that it planned to sell at least 200,000 Bronco vehicles in 2021, according to Automotive News.

Ford declined official comment this week on the sales projections.

“As values of vintage Broncos have climbed over the past decade, Ford knows it has a large group of hungry Bronco fans out there,” he said. “Over the past five or six years, the market for vintage Broncos has taken off. People spend between $100,000 and $200,000 on first-generation resto-mod Broncos. With the launch of the new Bronco, Jeep’s status as an icon won’t change, but Ford has long built innovative vehicles that resonate across generations. The new Bronco may be the latest in that line.”

But the legacy of Jeep is deep, dating to World War II.

It’s what made a Chrysler merger so desirable to Fiat years ago.

“In July 1940, the U.S. military informed automakers that it was looking for a ‘light reconnaissance vehicle’ to replace the Army’s motorcycle and modified Ford Model T vehicles. The Army invited 135 manufacturers to bid on production,” the Jeep website says.

“At first, Willys-Overland and American Bantam Car Manufacturing Company were the only two companies answering the call. Soon, however, Ford Motor Company entered the picture, and competition began among the three over which company would receive the lucrative government contract.”

The Army eventually chose Willys-Overland to build its Willys Quad, which led to the civilian Jeep.

“I’ve waited a long time for the return of the Bronco,” he said. “I feel the new design pays homage to the Bronco of old while updating the design in all the right areas.”

Gracin, whose father worked at a Johnson Controls plant making car seats for General Motors, followed his dream of becoming a successful country singer with more than a million records sold and a No. 1  single after debuting on “American Idol” and fulfilling a commitment to the U.S. Marine Corps. He and his wife recently welcomed a newborn son.

“I do come back home often to see friends and family,” Gracin said. “Michigan will always be my home state.”

Ford has not released images of the all-new Bronco yet, but its Bronco R Racing prototype gives a hint of what to expect. No prices are available.

The smaller Bronco Sport, built in Hermosillo, Sonora, Mexico, is expected to go on sale at the end of 2020. The Bronco, built by UAW members at Ford’s Michigan Assembly Plant in Wayne, is scheduled to go on sale in the spring of 2021.

Ford has declined to disclose its sales goals.

Ford executive Kumar Galhotra told CNBC on Tuesday that the Bronco brand will “add substantial volume to the company and they’re going to be growth volume because none of the vehicles exist today.”

Ford sees a “very large part” of Bronco consumers being new to the company, said Galhotra, president of the Americas and international markets group.

But market analyst Jon Gabrielsen questioned whether Ford can penetrate the off-road market enough to recover the company’s multibillion-dollar investment.

“Everybody wants the Bronco brand to do very well,” he said. “But Ford is seeking to sell substantial volume into a very small market segment that is dominated by Jeep — one of the strongest brands in the world, with 70 years of experience improving its off-road capability, coveted by fiercely loyal fans who frankly would rather fight than switch. We’re hoping the new Broncos will be as successful as their ancestors.”

At the same time, Ford’s new lifestyle brand will also premiere its Bronco family reveal video on Ford.com and  YouTube. Bronco and Bronco Sport reservations may be placed for $100 deposit at Ford.com at 8 p.m. Consumers must create a customer profile at Ford’s website in order to place an order.

This article originally appeared on Detroit Free Press: New 2021 Ford Bronco will take on Jeep Wrangler in sales after release

Thu Jul 9 , 2020
If you find yourself dozing off during the day that could be a sign that you’re getting insufficient sleep at night. David Prado Perucha/Shutterstock Most people spend about one-third of their day asleep. While scientists are still unsure exactly why we need sleep, they do know it rejuvenates the body […] 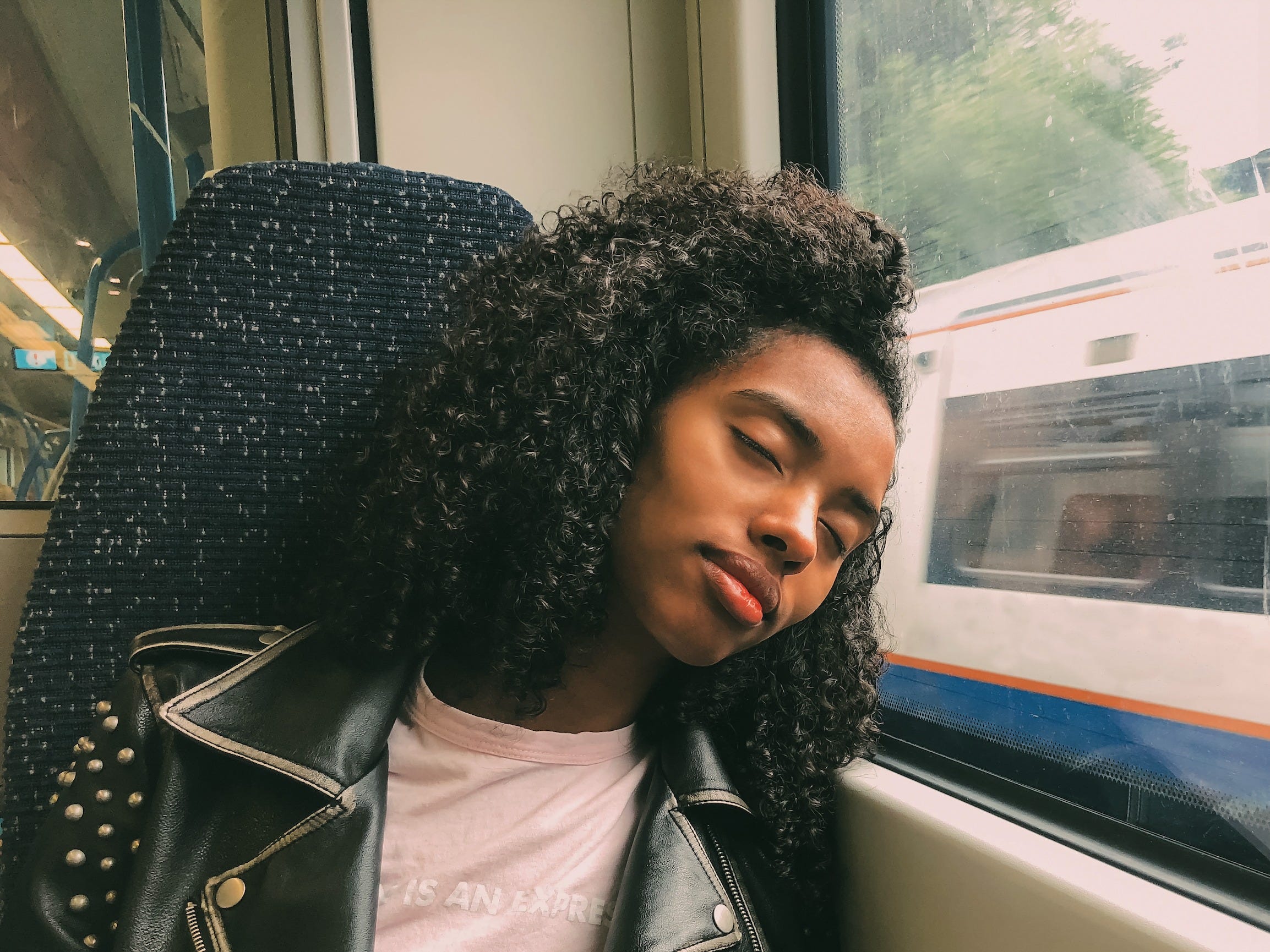