Dr. Anthony Fauci returns to Capitol Hill on Friday to testify before a special House panel. His testimony comes at a time when early progress on combating COVID-19 seems to have been lost and uncertainty clouds the nation’s path forward.

Also in Washington, the extra $600 in federal unemployment aid that helped many Americans stay afloat amid the coronavirus pandemic is expiring as plans for additional stimulus stalled in a deadlocked Senate.

A new survey shows fewer Americans want to resume daily activities like going to restaurants or sending children to school as cases spike. But as the school year approaches, state officials are releasing guidelines for schools to reopen. Increasingly, teachers are worried about their students’ mental health.

📰 What we’re reading: Kids’ mental health can struggle during online school. Here’s how teachers are planning ahead.

Dr. Anthony Fauci told Congress on Friday that experts are “cautiously optimistic” that by late fall or early winter a COVID-19 vaccine now being tested would be deemed safe and effective. Fauci, director of the National Institute of Allergy and Infectious Diseases, said the vaccine began Phase 3 testing last week involving 30,000 individuals that will last several months.

“We hope that at a time we get into the late fall and early winter we will have a vaccine that we can say would be safe and effective,” he said. “No one can guarantee the safety or effectiveness unless you do the trial, but we are cautiously optimistic that this week be successful because of the early studies on humans.”

In the span of a few months, Gov. Ron DeSantis has gone from one of the most admired state leaders in America to one of the most disparaged, with an approval rating that has dropped precipitously as coronavirus cases surged.

A pair of recent polls indicate more Floridians now disapprove of the job DeSantis is doing than approve. The latest was released Friday by Mason-Dixon Polling & Strategy. It shows that 49% of Florida voters disapprove of the governor’s job performance, compared to 45% who approve. That’s a 17 percentage point drop from the 62% of Florida voters who approved of DeSantis in a Mason-Dixon poll from last year.

As the virus has raged out of control, DeSantis has closed bars but taken few other steps to contain the virus. He repeatedly played down the explosion of new cases, at first attributing it to more testing and then arguing that the big increase in cases isn’t such a big deal because many of those infected are younger and less likely to get seriously ill.

The postponement is a setback for the pro-democracy opposition, which was hoping to capitalize on disenchantment with the current pro-Beijing majority to make gains. A group of 22 lawmakers issued a statement ahead of the announcement accusing the government of using the outbreak as an excuse to delay the vote.

Virus takes its toll on Muslim holiday, with curbs on travel, large gatherings

The coronavirus pandemic is forcing Muslim families worldwide to readjust their celebrations this week for Eid al-Adha, the second of two major Muslim holidays, as families scale back travel and adhere to face social distancing guidelines.

Eid al-Adha,  which marks the end of the hajj, or pilgrimage, season, is a three-day celebration in Muslim-majority countries. In the United States, most observe just one day.

This year Saudi Arabia suspended travel to Mecca for the annual hajj. Worldwide, many gatherings will take place online this year, unlike big celebrations such as a gathering of 30,000 people in a football stadium in Minnesota.

Nearly half of more than 250 law enforcement agencies surveyed this month say they already being hit by stiff budget reductions because of the coronavirus pandemic and the national movement to defund the police.

The report slated for release this week by the Police Executive Research Forum, a nonpartisan research organization, finds few agencies, regardless of size, are being spared. Deep reductions have been ordered or proposed in Los Angeles; New York; Seattle; Baltimore County, Maryland; Tempe, Arizona; and Eureka, California.

Much of the funding is being pulled from equipment, hiring and training accounts, even as a number of cities also are tracking abrupt spikes in violent crime, the report concluded.

Minnesota schools will have flexibility in reopening

Minnesota Gov. Tim Walz unveiled a reopening plan Thursday that includes an equation for districts to use to decide whether to reopen with in-person class, distance learning or a hybrid option dependent on the viral activity in the surrounding county and the district’s ability to meet mitigation requirements.

“With this approach, we are pairing the knowledge and data from our departments of health and education with the expertise of our local school districts to make the best decisions for our students across the state,” Walz said.

The announcement comes a month after state health and education officials asked districts to prepare for the three scenarios — and be prepared to switch between the options based on local spread of the novel coronavirus.

Louisiana Gov. John Bel Edwards said Thursday he expects to extend the mask mandate, bar closures and other COVID restrictions beyond Aug. 7 when his current order is set to expire.

“People should not expect us to be making major changes every two weeks,” Edwards said during a public press briefing. “I don’t want people thinking there are going to be major changes. That doesn’t seem likely based on current data.”

Edwards will officially announce his decision next week, but sent a clear signal that the modified Phase 2 of reopening order will remain in place. Though the governor said there are hopeful signs of a plateau in the infection based on a three-day run of fewer hospitalizations, “We remain No. 1 among states in per capita cases.”

Extra $600 in unemployment aid set to lapse as talks deadlock

A deadlocked Senate on Thursday exited Washington for the weekend without acting to extend a $600 per-week expanded jobless benefit that has helped keep both families and the economy afloat as the COVID-19 pandemic continues to wreak havoc on the country.

Friday’s expiration of the $600 jobless benefit sent Republicans controlling the Senate scrambling to respond. Top Senate Republican Mitch McConnell made a procedural move to make it easier to reach a potential compromise next week that would extend the bonus unemployment benefit while talks on a broader COVID relief measure grind on.

Buddy the German Shepherd has died. He was the first pet dog in the United States to test positive for COVID-19, the disease caused by the coronavirus. After months of him being ill, his owners and vet made the difficult decision to euthanize him, according to an exclusive report by National Geographic. The beloved dog died July 11 in Staten Island, New York.

Buddy first exhibited symptoms of the virus in mid-April, right before his seventh birthday. He was struggling to breathe, lost weight and became increasingly lethargic. After multiple visits to three different veterinarians, heart medications, steroids and other medical interventions, Buddy was tested for COVID-19 on May 15. But it wasn’t until June 2 the New York City Department of Health called the Mahoney family to tell them that their dog had indeed contracted the virus.

Bryan Cranston is revealing that he had coronavirus. Now, he says he’s using his antibodies in hopes of helping others. “I had COVID-19 a little while ago,” Cranston, in a mask, tells fans in an Instagram video posted Thursday. In the post’s caption, he writes that he got the virus despite strictly following protocols.

“I’m very lucky,” he says, “very mild symptoms.” Text at the bottom of Cranston’s video describes the Emmy winner’s symptoms as including a slight headache, chest tightness and loss of taste and smell.

Since recovering, Cranston explains that he has started giving plasma at the UCLA Blood and Plasma Donation Center, “because I have the antibodies.” Text on the selfie video reads that doing so “will help people recover faster and be used in scientific research studies about this virus.”

For the second time this month, the European Union extended its travel ban on Americans on Thursday, as COVID-19 infections continued to rise across the United States. The EU first started lifting its travel restrictions outside the bloc on July 1, welcoming visitors from 14 countries, including Canada, South Korea and Australia. The U.S. was left off that initial list, and the EU extended its ban on Americans visiting the bloc on July 16.

The announcement, by the European Council, came after EU officials conducted their biweekly review of travel restrictions, examining coronavirus trends and containment measures in each country to determine whether to add or narrow the list of permitted travelers. The key measurement: The pandemic outbreak in a given country needs to be equally contained – or better – than in the EU.

Based on a seven-day rolling average, daily cases of the coronavirus in the U.S. have fallen to 65,266, down about 3% from a week ago, according to Johns Hopkins University data. Researchers prefer to see two weeks of trending data, but University of Florida biostatistician Ira Longini said he thinks “the direction is real.”

More good news: The percentage of positive tests nationwide dropped from an average of 8.5% to 7.8% over the past week. Still, Dr. Ali Khan, dean of the University of Nebraska College of Public Health, warns that yet another boom in cases is possible. “This disease will continue to hopscotch around until it finds tinder – susceptible individuals – like any good fire,” Khan said.

For the third consecutive day, the Florida Department of Health reported a new daily record for COVID-19 deaths Thursday. The 253 fatalities represented a jump of almost 20% from the record set the previous day. The total death toll among Florida residents now stands at 6,586, almost half of them in July.

Herman Cain, one-time presidential hopeful and former CEO of Godfather’s Pizza, died Thursday after being hospitalized in Atlanta for coronavirus treatment a month ago, according to his website and social media.

“Herman Cain – our boss, our friend, like a father to so many of us – has passed away,” wrote Dan Calabrese on Cain’s website.

Calabrese said Cain, 74, was “pretty healthy” in recent years but that his history with cancer landed him in a high-risk group for the coronavirus. Cain recently joined Newsmax TV and was working toward launching a weekly show.

Newsmax said Cain had attended a rally for President Donald Trump in Tulsa, Oklahoma, in June, less than two weeks before he was diagnosed. Newsmax said it was not known where Cain, chair of Black Voices for Trump, was infected.

On Facebook: There’s still a lot unknown about the coronavirus. But what we do know, we’re sharing with you. Join our Facebook group, “Coronavirus Watch,” to receive daily updates in your feed and chat with others in the community about COVID-19.

The Weird Quirks of Covid-Era Shopping

Fri Jul 31 , 2020
(Bloomberg Opinion) — The pandemic has given rise to some big changes in consumer behavior. We’re all familiar with the obvious ones by now, including more meals at home, fewer trips on airplanes and a dearth of reasons to buy high heels or suits. But after a batch of big-name consumer companies reported earnings in […] 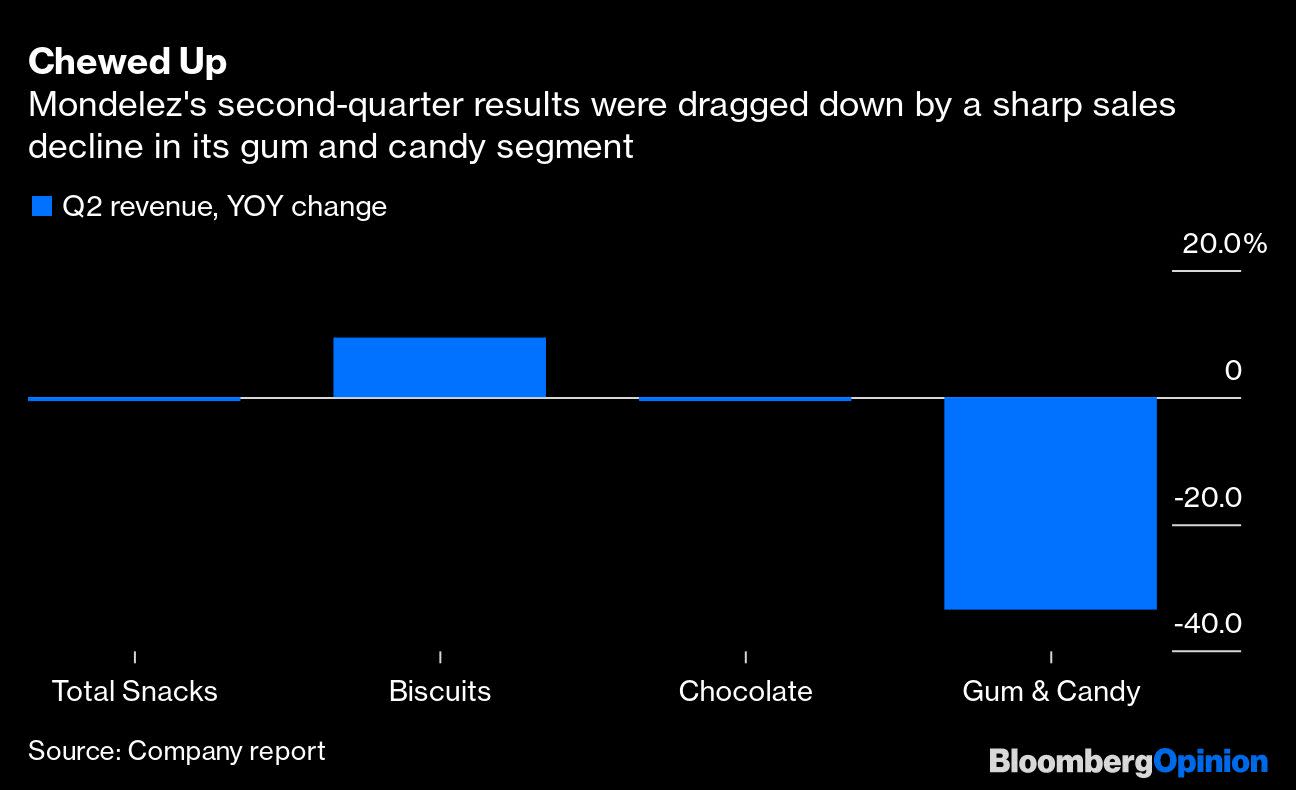