During her winter break, English teacher Keara Williams has hit the phone, making call after call determinedly trying to make contact with her students and their parents.

She needs to reach 28 students, including 11 seniors, who received an “incomplete” grade at the end of the fall semester. She tells them they will fail her class if they don’t complete make-up work to raise their grade to at least a D by the end of January. There is still time to get the work done, do not give up, Williams says. And she lets them know that she is here for them — all winter vacation if that’s what it takes to avoid an F.

She has reached 13 students and left messages and emails with the others. But when she last checked her computer, only one had signed in online to look at the make-up work.

Williams, like so many teachers in the Los Angeles school district, is grappling with wrenching grading decisions amid the hardships of the raging pandemic that has shuttered campuses for nine months. An F grade in a required class would delay or deny a high school diploma, require a make-up class and could ruin a GPA during the college admissions cycle. How do they balance compassion and empathy with the low grade points in their record books? How do they find and engage their lost students before it’s too late? The magnitude of work ahead for both teachers and students feels overwhelming, many said.

“For me, it’s personal. I want to know what’s going on, but they’re not answering,” Williams said. Even when she’s not sitting behind her computer, she’s doing mental gymnastics to figure out ways to help them: “How do I be the most effective teacher?”

The report card crisis came to a head on Dec. 14, four days before the end of the fall semester, when L.A. Unified sent a directive to school administrators about grading. Because grades had so dramatically deteriorated amid pandemic hardships, no students would receive a failing grade until Jan. 29, so they would have more time to complete work. The directive said the decision was made with “an equity and empathy lens.”

L.A. Unified officials have been struggling since March on how to balance student accountability and engagement with family trauma and inadequate learning conditions at home. Last spring, during the first semester of the pandemic, officials did away with all failing grades. When schools resumed in the fall, the district urged teachers to grade on end-of-course knowledge — and not to penalize students on the basis of attendance, attitude or participation. When 10-week reports showed an explosion of failing grades — a trend mirrored in school systems across the nation — L.A. Unified tried to enhance outreach through counseling and tutoring.

But by the 15-week semester mark, the percentage of failed classes among Latino high school students was 24.9%; for Black high school students, it was 23.2%. This compares with 12.9% for white students and 7.6% for Asian students. The number of failing grades for students learning English already was high, but it increased by nearly 15 percentage points, rising to 35%.

Many teachers agree with the intent to give students a second chance. But in interviews, some said their students are facing pandemic pressures greater than a course grade — and the 11th-hour policy change is particularly difficult to carry out during winter vacation.

Some students are experiencing homelessness, taking on jobs to help their families, becoming their sibling’s caretaker. They face circumstances beyond their control, such as becoming infected with COVID-19 or losing a family member to the virus. Many lack a space to study and are coping with isolation and depression — and the challenges of distance learning are not going away soon.

It is uncertain when, or even if, in-person classes will resume this academic year.

Cecily Myart-Cruz, president of the United Teachers of Los Angeles, criticized the “top-down decision” on grading made without the union’s input.

“It’s all the more frustrating because educators support empathy and compassion for students in this unprecedented time. But this is not the way to do it, and it does not resolve the complicated issues of grading during a pandemic,” Myart-Cruz said.

Some education experts say the lack of clear and early guidance on grading this fall is yet another indicator of how difficult it is to navigate schooling during the pandemic, which has exacerbated inequities in schools.

“We don’t know whether the student’s performance is a product of their actions or the results of system failures,” said John Rogers, a professor of education at UCLA’s Graduate School of Education and Information Studies. “It’s important to provide flexibility.”

For each incomplete, Los Angeles teachers must document several attempts to reach parents, compile an individualized assignment plan for each student and work with a counselor to help advance the student’s progress.

“I have to consciously and constantly think of my caseload of students and what I need to do to support them,” said Williams, who teaches at the Responsible Indigenous Social Entrepreneurship school at the Hawkins High School campus in South Los Angeles.

Casey Jagusch, who teaches seventh grade history at Olive Vista Middle School, has three times as many failing grades as she typically sees.

On the last day of the fall semester, she completed 67 forms to send home to students who failed her class.

“The solution of giving kids more time doesn’t necessarily address the cause of having too many Fs,” she said. Her students need motivation, not time.

They show up to class, but they aren’t turning in work, she said. She has been merciful with students who are near the passing threshold, but she is torn when dealing with students whose grades dip lower.

“You really want to see kids be successful, but I also can’t do the work for you,” Jagusch said. She struggled to describe the feeling, knowing that the pandemic has created extra barriers for her students. She asks them what they need and what would help in their situations — but doesn’t always hear back.

“There is a feeling of… I don’t want to say hopelessness, because I feel like there’s always a way to problem-solve. But it does feel like that sometimes. Especially for the kids who aren’t reaching out.”

She is trying to remain optimistic: “If you can help students see why doing their work — and trying their best on their work — is important to them, then they’ll find that motivation inside themselves.”

Jessica Garcia, a 16-year-old Lincoln High School junior, began to feel sick the week after Thanksgiving with a fever and coughing fits. She, her two brothers and father tested positive for COVID-19.

Her body ached; it was difficult to get out of bed. School assignments piled up, and her stress mounted. By the end of the semester, the student who had maintained mostly As and a few Bs, was now confronting Bs and Cs, and an F in AP English Language and Composition.

She worried about her college dreams. “I knew that it was important for me to catch up,” she said, determined to make up work over vacation. She chose the book “Tweak” by Nic Sheff, which tells of how a teen became an addict and how he recovered, for make-up assignments.

“I know some kids don’t like to do work over break. I know we do need breaks,” she said. But she needed to improve her grades so that they don’t hurt her chances of going to college.

“That’s one of my biggest goals,” she said.

Maintaining such drive amid the dragging months of distance learning is difficult, teachers and experts said.

“What we have to worry about now is kids just giving up, altogether,” said Pedro Noguera, dean of the USC Rossier School of Education.

Marisa Crabtree, who teaches English at Lincoln High School, worries that some students have already done just that. Across all her classes, which include Advanced Placement students and English learners, she has seen a rise in Ds and failing grades.

Some, like Garcia, have committed to making up the work, Crabtree said. But she is most worried about the small group of students who will likely fail. She has adjusted her grading scale during the pandemic and is checking her email over the break in case students reach out. But for those who need the most help, distance learning isn’t working, she said. The gap between her students who are failing and passing is wider than before.

“Probably the majority of them were never logging in, never turning in work consistently, and not in Zoom,” she said. “Of course, we always have hope.”

As friends and family became infected with COVID-19, Tristan Gamboa, also a junior at Lincoln High School, struggled to pay attention in online classes. It was so easy, she said, to just shut her laptop and make her assignments disappear.

“Little by little, it became easier to just ignore it,” said Gamboa, whose aunt was hospitalized for COVID-19. Gamboa ended up receiving incompletes in three classes: AP English Language and Composition, chemistry and algebra.

But she intends to take advantage of her second chance, completing work before school starts again and scheduling Zoom meetings over the break with her chemistry teacher. Her friends are pushing her to do better, as is her mother.

“I just want to get a good education and go to college and get a good job, so she doesn’t have to worry,” she said.

Wed Dec 30 , 2020
Photograph: Angel Colmenares/EPA While the crystal-encrusted New Year’s Eve ball will drop in Times Square at midnight on 31 December, its descent will diverge from tradition: this sparkling, 12-foot sphere will be greeted by empty streets due to Covid-19, and not hundreds of thousands of revelers. New York City authorities […] 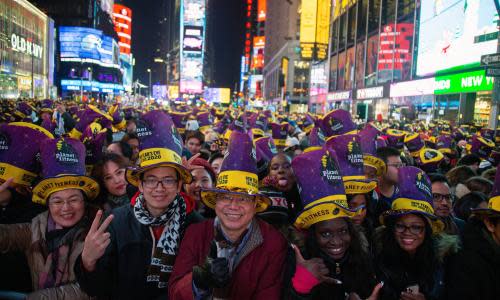