Detroit — Former United Auto Workers President Dennis Williams resigned his membership from the union ahead of an expected guilty plea in federal court Wednesday that would make him the second retired union leader convicted of embezzling hundreds of thousands of dollars spent on personal luxuries.

UAW spokesman Brian Rothenberg confirmed the Sept. 18 resignation hours before Williams’ 3 p.m. plea hearing in front of U.S. District Judge Paul Borman, which will serve as another landmark moment in a years-long federal crackdown on auto industry corruption that has pushed one of the nation’s most powerful unions to the brink of federal takeover. 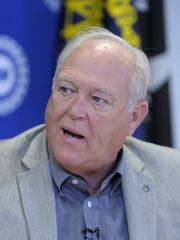 Williams, 67, of Corona, California, will be the 15th person convicted of a crime following an investigation that has revealed labor leaders and auto executives broke federal labor laws, stole union funds and received bribes and illegal benefits from union contractors and Fiat Chrysler Automobiles NV executives.

He was arraigned Wednesday via Zoom videoconference and released on a $10,000 unsecured bond.

The hearings marked a rare public appearance for Williams, who is expected to plead guilty at 3 p.m. via videoconference. He was last heard from during a series of nationwide raids by a team of federal agents from the FBI, Internal Revenue Service and Labor Department. He was held at gunpoint, ordered to lie down and handcuffed after confronting federal agents who arrived to search his $610,000 California home in August 2019.

The criminal investigation is ongoing. Prosecutors and UAW leaders are negotiating a possible deal that could include prolonged federal oversight aimed at eliminating corruption within the union and implementing reforms.

The hearing comes one month after Williams, who headed the UAW from 2014-18, was charged with conspiracy to embezzle union funds, a felony punishable by up to five years in federal prison and a $250,000 fine.

The UAW had paid Williams’ legal team at least $320,912 but stopped payments in August after most of the legal work had concluded. He later was charged, and the union’s governing International Executive Board demanded his resignation or said it would seek to remove him under the UAW constitution, Rothenberg said in a statement.

“Under policies of the UAW, including those enacted by current UAW President Rory L. Gamble and our International Executive Board,” he wrote, “Williams will be required to repay the UAW for all legal fees paid by the union on his behalf or face legal action, and Williams will be required to repay any further union funds he wrongly took or misspent.”

Petitions by rank-and-file members dating to at least last October have called for Williams’ membership to be revoked.

The executive board ignored the request because he had not been charged with wrongdoing. Scott Houldieson, a union member and chair of the dissident United All Workers for Democracy caucus, appealed the decision in June the decision to the four-member independent Public Review Board, which on Sept. 24 remanded the case to the board, stating “enforcement of the Ethical Practices Codes is not dependent upon whether the government has brought criminal charges against a union officer or member; rather, the Union has an independent duty to regulate itself under the Codes,” according to a news release from the UAWD this week. By then, however, Williams had resigned.

The criminal filing against Williams capped a prolonged period of uncertainty for Williams, who retired in June 2018. He was publicly implicated in the corruption scandal the next month when The Detroit News named Williams as the unidentified UAW official accused in a federal court filing of illegally ordering underlings to offload entertainment and travel expenses to Fiat Chrysler Automobiles.

The conspiracy outlined by federal prosecutors started in 2010, when Williams was the UAW’s secretary/treasurer, and lasted until September. The conspiracy involved top leaders in the UAW assigned to Detroit and a regional office in Missouri.

Williams and his co-conspirators spent hundreds of thousands of dollars on lavish entertainment, private villas, meals, cigars, golf and more during UAW junkets, prosecutors said. And the union bosses hid the expense from members.

There were at least seven members of the conspiracy, prosecutors said. That includes Jones, who pleaded guilty earlier this year and is awaiting a federal prison sentence. Other members include Jones aides Vance Pearson, who oversaw the UAW’s regional office in Missouri, and Nick Robinson, who worked at that office.

Prosecutors use letters to refer to three other members of the conspiracy who have not been charged. The News has previously identified them as: Former Jones aide Danny Trull, aka “UAW Official C.” Former Williams aide Amy Loasching, aka “UAW Official D,” whose home in Wisconsin was raided by federal agents last year.