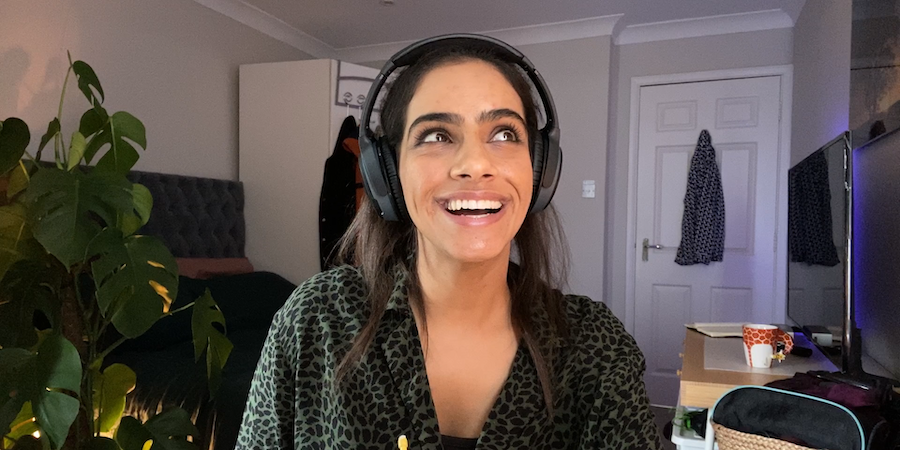 Interactive movie Five Dates lands this week. From November 17, Black Mirror: Bandersnatch fans will be able to embark on a much lighter take on the concept of a narrative delivered via a click-based adventure.

Featuring Doctor Who’s Mandip Gill (Yaz), Five Dates is an online rom-com (ROM-com?) telling the story of Vinny (Two Weeks to Live’s Taheen Modak), a charming (or slightly less charming, depending on which options you choose) singleton who’s signed up for a dating app to help him get through lockdown. Vinny has five dates to go on, and one of his matches is played by Gill.

So, yeah, less heavy than Black Mirror, but it turns out Gill had already avoided the darker version of Bandersnatch going into Five Dates.

Uniquely, Five Dates was filmed during lockdown, after Gill’s Apple+ series Suspicion was shut down – meaning the interactive movie was shot, costume designed, and production designed by the cast themselves. It’s a big responsibility, one that not everyone was completely prepared for…

“Like any other project, it came through my agents,” Gill said. “They sent it through, they said, ‘have a read of the script’, and they said it was interactive. I didn’t really think about it, I thought of it as a normal audition.”

“I really liked the script and I thought, ‘You haven’t done anything in isolation’, and you don’t really think about recording it at home, you just think about the script, and the fact it’s a young director. I’d seen his other bits of work.

“So I thought, ‘Why not? Let’s go ahead with it’ and then it transpires, ‘Oh, I’m supposed to do the technical stuff as well as the lighting!’ because at that point I could just about send an email!” she continued.

“I’d said no to voiceover work because I wasn’t sure if I’d be able to do the technical stuff. An iPhone 11 came in the post, with some wires. The coolest thing for me was they had a lightbulb that they could connect to an app to change the lighting. We went through my costume, and what we could use as props, and how to dress the room.

“Then there’s all the stuff you never have to think about. There’s a scene where we have to create drinks. [I’d ask,] ‘Do you want straws? Would she have blue cups?'”

Watching Five Dates, it certainly seems that despite her doubts, Gill took the technical stuff in her stride. For the experienced actress, the toughest part of the shoot involved stepping outside of her performance comfort zone.

“The hardest part for me was when I realised how many versions of each date there was,” she said. “I don’t know why I thought we were going to film them in tiny bits, but you can’t because things need to flow.

“We did a day and a half, but it was jam-packed. We shot from first thing in the morning. Paul, the director, he’d done a flow chart that had made it look really easy. I think that’s why I was taken aback, it looked so easy. It was all laid out. But it was heavy, it was back to back.”

But the schedule didn’t mean there weren’t opportunities for Gill to contribute to her character.

“There was definitely room to pad her out, and I want to participate in that process, but I also like when a character is really filled out when you see it on paper. She was very specific and really different from me. The more different a character is from you, the easier it is to get to,” she explained.

“She’s a gamer, she works for the NHS, all that stuff – she’s really not like me, so it’s easy to get to her. But then there was room for me to contribute to the costume – because it was all my own clothes.

“I tried to choose clothes that had been gifted to me, that I wouldn’t actually wear. I didn’t want the character to be me, and we probably wouldn’t wear the same clothes, really. [I’d think,] ‘I wouldn’t put that shirt with that, and I wouldn’t button it up to the top’.

“There were lots of places where you needed to fill in the flow charts, to make them smooth. I don’t do lots of improvisations, I do lots of scripted stuff where you must say what’s on the pages and not any more. So having that room to play about with that was, for me, as an actress, liberating, and something I hadn’t done before.”

Of course, something Gill had done before was play a key worker. In Doctor Who, she plays a police officer, in Five Dates, she’s an NHS nurse – and it’s a role that had heavy significance during the lockdown shoot.

“There’s a little bit where my character goes, ‘It’s time for the clap’. That had become such a big part of my life,” she said.

“The first time I clapped and the whole street in South London started clapping, I almost started crying, and I’m not an emotional person like that. It hit home. It was an amazing part to play at that time.

“It’s coming out in a second lockdown, I hope it resonates with people playing it at home.”

Five Dates is released worldwide for digital download on Windows & Mac via Steam, PS4, Xbox One and Nintendo Switch on November 17, and iOS/Android in 2021.

Digital Spy has launched its first-ever digital magazine with exclusive features, interviews, and videos. Access the latest edition with a 1-month free trial, only on Apple News+.