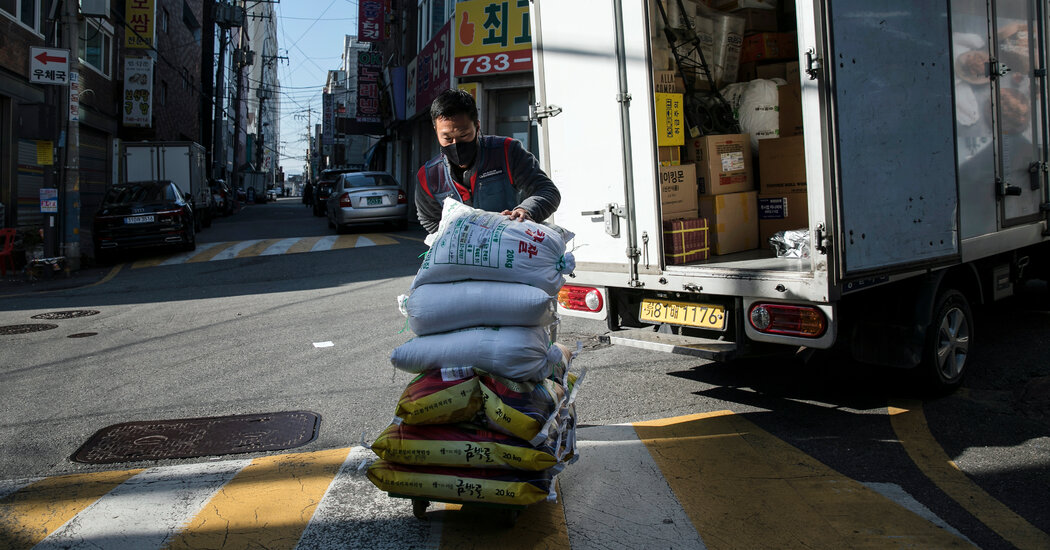 SEOUL, South Korea — At a logistics depot the size of an airplane hangar in southern Seoul, couriers recently held a ritual at the start of another grueling work day: They stood for a moment of silence to remember 15 fellow couriers who they say died this year from overwork.

“We won’t be surprised here if one of us drops dead, too,” said Choi Ji-na, one of the couriers.

Ms. Choi, 43, and other delivery workers in South Korea say they feel lucky to have jobs amid growing unemployment, and that they are proud to play an essential role in keeping the country’s Covid-19 cases down by delivering record numbers of packages to customers who prefer to stay safe at home.

But they are also paying a price.

The string of deaths among couriers this year has caused a national uproar, drawing attention to worker protections that are unevenly distributed in a place that once had one of the longest workweeks in the world. Packages are expected to arrive with “bullet speed,” but the uninsured workers delivering them say it is becoming impossible to keep up with the demand, and that labor rule changes made by President Moon Jae-in have left them out in the cold.

There have been 15 deaths among couriers so far, including some who died after complaining of unbearable workloads that kept them on the clock from dawn until past midnight. The delivery workers say they’re dying of “gwarosa,” or death by overwork.

“The workload has become just too much,” Ms. Choi said. “Since the coronavirus came, going home early enough to have dinner with my children has become a distant dream.”

Couriers are some of the hardest-working, least protected workers in South Korea. Between 2015 and 2019, only one to four couriers died per year. This year, nine couriers died in the first half of the year alone, according to data that the Korea Occupational Safety and Health Agency submitted to the lawmaker Yong Hye-in.

When President Moon slashed the maximum workweek to 52 hours from 68 in 2018 to ensure a “work-life balance” and a “right to rest,” couriers were left out of the deal. As the pandemic rages on and packages pile up, couriers say they are not only facing longer hours, but an ever-present fear that they will succumb to the mounting volume of work.

Online orders have surged around the world, and demand for delivered goods in South Korea has grown by 30 percent, to 3.6 billion parcels this year, according to some estimates.

Most deliveries in South Korea are handled by large logistics companies. Those firms outsource the labor to couriers, who are independent subcontractors working on commission using their own trucks in assigned areas. Since 1997, as e-commerce as boomed and competition has intensified, online shipping costs in the country have dropped by more than half.

Shopping malls and logistics firms now promise even faster deliveries, offering “within-the-day,” “before-dawn” and “bullet-speed” options. But the fees collected by couriers have dropped. Workers now receive between 60 and 80 cents per parcel and have been slapped with penalties when they fail to meet delivery deadlines set by major online shopping retailers.

One courier in Seoul, Kim Dong-hee, returned home at 2 a.m. on Oct. 7. Later that day, he returned to the warehouse to pick up 420 packages. He still had many deliveries to make when he texted a colleague at 4:28 a.m. the next day. He said he would be home by 5 a.m. but would barely have time to eat and wash up before heading out again.

Four days later, he didn’t show up for work. When colleagues checked his home, they found him dead; the police ruled that heart failure was the cause. Colleagues say he was killed by overwork. He was 36.

The day Mr. Kim sent his message, another man in Seoul, Kim Won-jong, collapsed on his delivery route, complaining of chest pain and difficulty breathing before he died.

“I remember how tired he looked late in the evening, his shoulders slumped and his cap pulled low, as if he were semiconscious,” a customer who knew Mr. Kim wrote online after his death made news.

It has become common to see weary couriers weaving through apartment compounds in the dead of night, delivering fruit, bottled water, Christmas decorations and other items many shoppers now prefer to have delivered. Some residents who fear infection have refused to share elevators with delivery workers, forcing them to haul packages up stairs.

The pandemic has brought profits to couriers and logistics companies like CJ Logistics, Hanjin Shipping and Lotte. But categorized as self-employed, most of the country’s estimated 54,000 “taekbae gisa,” or home-delivery drivers, do not benefit from the labor laws that protect full-time corporate employees. Benefits such as overtime, paid vacation and insurance against on-the-job injuries are largely unavailable.

According to a September survey by the Center for Workers’ Health and Safety, a rights group, couriers work an average of 12 hours a day, six days a week. According to government data submitted to lawmakers, work-related injuries for couriers soared by 43 percent in the first half of the year.

Couriers in the United States, Europe and China have gone on strike seeking better protections. In South Korea, they have staged strikes hoping to secure shorter hours and a “life with evenings.”

“We organized and fought back because we had no one to talk to,” said Park Ki-ryeon, 36, a courier since 2016.

“We, too would like to keep warm indoors, like the people we serve,” Mr. Park said. “But many of us are not well educated and started this work with debts to pay. If we quit, we don’t have an alternative.”

Ms. Choi became a delivery worker seven years ago after a divorce made her a single mother of two young children. She has hauled packages weighing up to 55 pounds apiece up and down stairs. She sometimes has to climb walls to make deliveries, because homeowners are out, with their gates locked, but want the parcels left inside. Couriers have been known to injure their ankles — or become the subject of police calls made by neighbors who mistake them for burglars.

She said she liked the work because she could get home in time for her children to return from school, but the virus changed everything. Ms. Choi now delivers up to 370 parcels a day, 30 percent more than before the pandemic. She starts work at 6:30 a.m. and rarely gets home before 10 p.m.

At the depot, container trucks rumbled in under the pre-dawn sky, bringing cargo from across South Korea. As what seemed like an endless stream of parcels of all shapes and sizes were unloaded, Ms. Choi and her colleagues gathered around a conveyor belt to search for packages with addresses in their districts.

The deliveries would stretch well into the night.

Some logistics companies have apologized for the recent spate of deaths and promised to provide benefits, like medical checkups, and add more workers in phases to help shorten work hours and manage the increased volume.

Mr. Moon’s government has vowed to introduce a five-day workweek and ban nighttime deliveries, admitting that his policies have not kept up with the growth of the delivery industry and that “the burden was concentrated in long hours and heavy workloads for couriers.”

After the deaths generated headlines, people also began expressing sympathy for the couriers, leaving drinks and snacks at the door with notes saying, “It’s OK to be late.”

“When strangers pass me on the streets, they say to me, ‘Please don’t die! We need you,’” Mr. Park said. But the reforms promised by logistics companies and the government have been too slow to arrive.

When his grandmother died last month, Mr. Park said, he had to hire a replacement courier with his own money to deliver the parcels along his route just so he could take a half day off to mourn her. “We want change,” he said. “We are not working machines.”